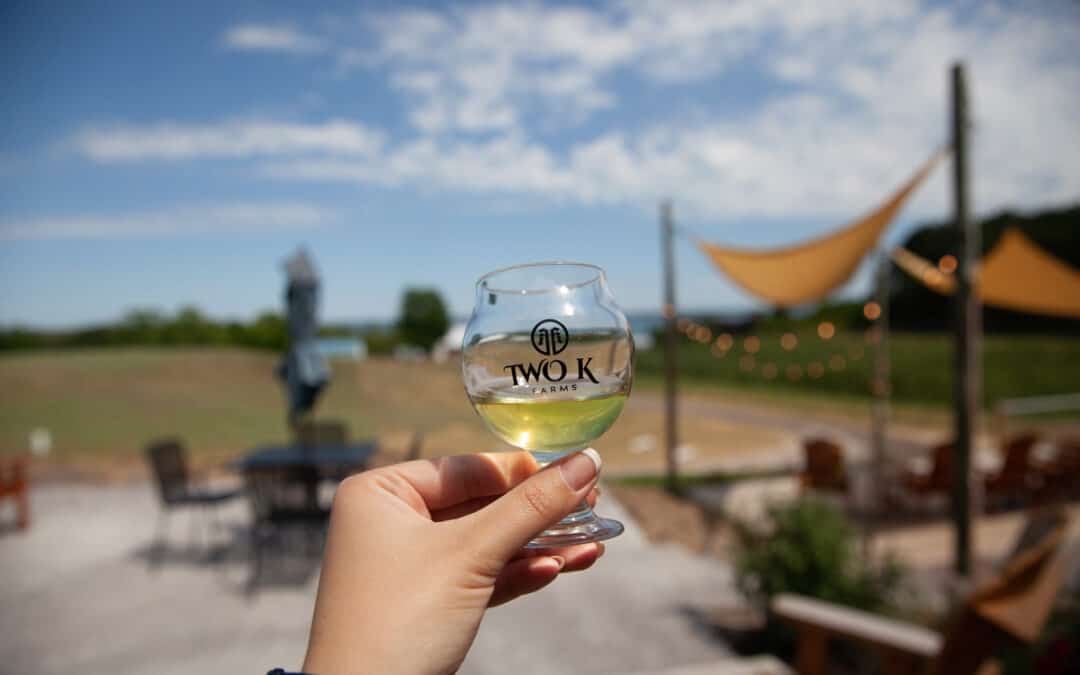 Two K Farms in Suttons Bay is doing cider differently—and we’re impressed. We recently stopped by the tasting room to learn more about and, and most importantly, sample their new single-varietal ciders.

We’re confident that once you taste what’s going on at Two K, you’ll never look at cider the same again. At this Leelanau County cidery and winery, the apples taste like apples: grafted, grown, pressed, fermented, and poured onsite.

After graduating from Michigan State’s College of Agriculture & Natural Resources, brothers George and Max Koskela had a pretty ambitious goal. Intrigued by the old-world ciders of Britain, the Koskelas wanted to bring heritage apple varieties that had never been grown in the Midwest before to Michigan’s Leelanau Peninsula.

We’ll give you a hint: they succeeded. Today, with more than 20,000 trees growing in their orchard, Two K is responsible for one of the largest, high-density growing plantings in the Midwest. 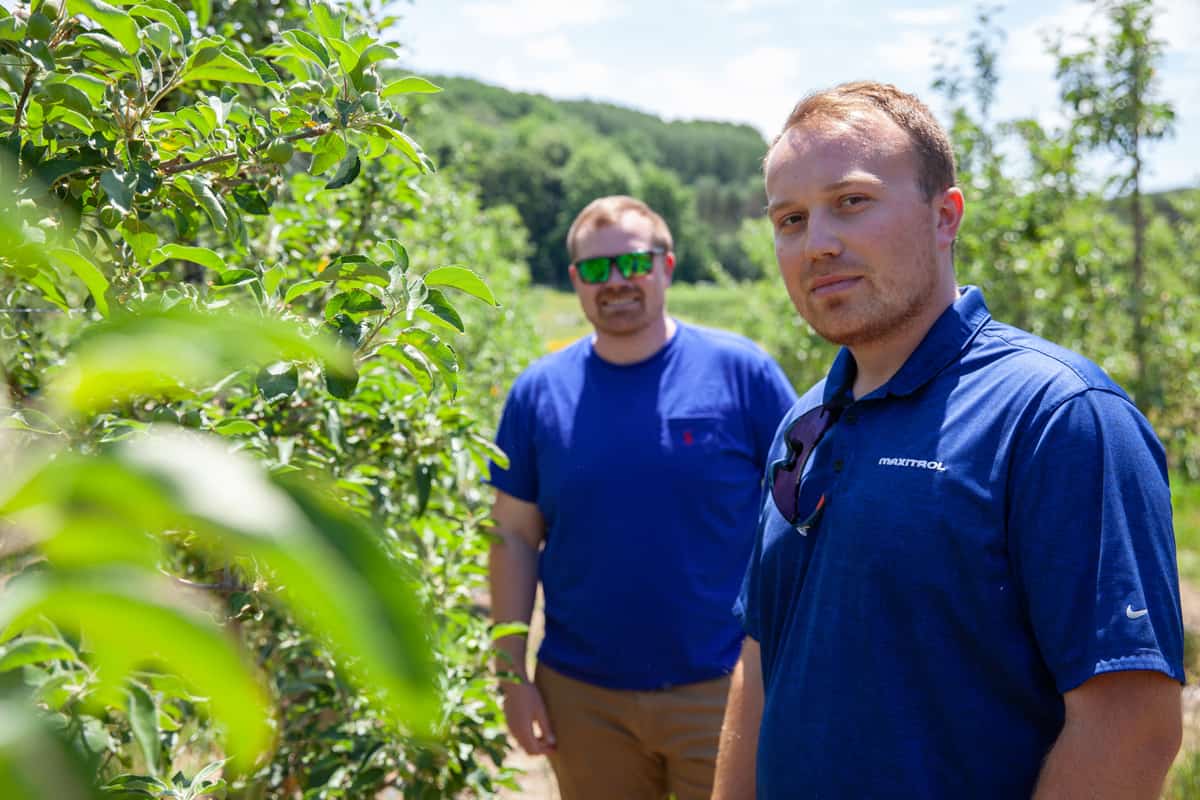 But before we get ahead of ourselves, let’s jump back a bit.

When European settlers came to the colonies in search of a new life, they brought Britain’s hailed beverage: hard cider. The apple trees that colonists planted thrived on the East Coast, and cider remained the drink of choice for many decades.

Now, very few of these trees remain. Whether it was due to climate, an economic shift toward growing monocultures and grain (aka beer), or simply natural occurrences (tornadoes, hurricanes), by the 1880s, a majority of the apples in the U.S. were grown mainly for eating. Cider apples fell by the wayside, and the few heritage varieties that were left remained on the East Coast.

It was these cider apples that inspired the vision for Two K. 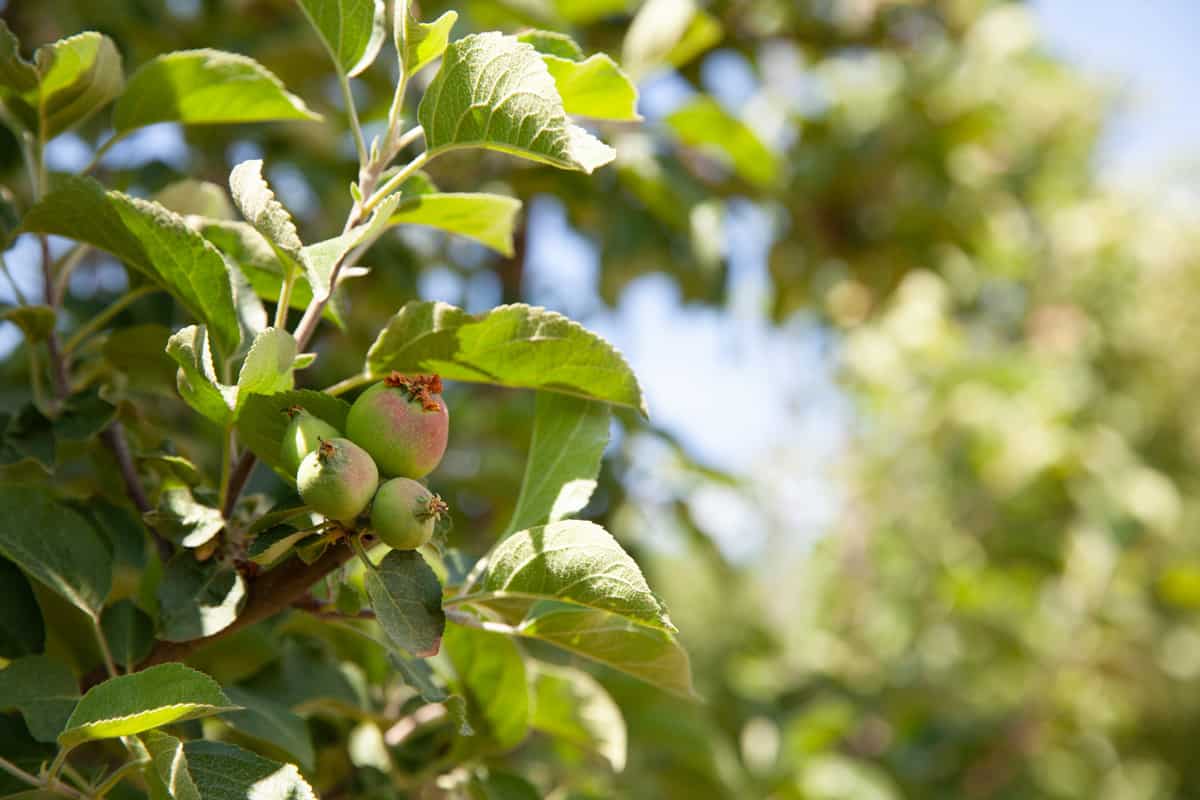 In 2012, the brothers planted their first block of experimental trees on an 80-acre lot just 20 miles north of Traverse City in Suttons Bay. They decided to give 15 varieties of apples a go and also planted a small vineyard at the front of the property. The apple varieties were chosen based on (1), what the brothers felt would make interesting ciders to intrigue consumers and, (2), what they thought would actually grow in Northern Michigan’s climate.

Among the apples first planted was the Kingston Black, the darling of the cider apple world. Known for producing the “perfect cider,” the Kingston Black has a wonderful balance of sweetness, acidity, and tannins; something the Koskelas feel many ciders made in the Midwest are missing with run-of-the-cider-mill apple varieties.

But, the brothers were taking a risk—they had been warned that Kingston Blacks would likely not survive Northern Michigan’s harsh winters.

“The climate in England [where Kingston Blacks are traditionally grown] is very temperamental with pretty mild winters, and of course the climate in Northern Michigan is very different from England,” Max says.

Due to its tendency to bear an inconsistent crop of fruit year-to-year (also known as biennial bearing) and susceptibility to disease, the Kingston Black was going to be a difficult heritage variety to grow in Michigan. The brothers were hopeful, though, that their naysayers would end up sounding just like those who said grapes couldn’t be grown in Northern Michigan’s microclimate 40 years ago. 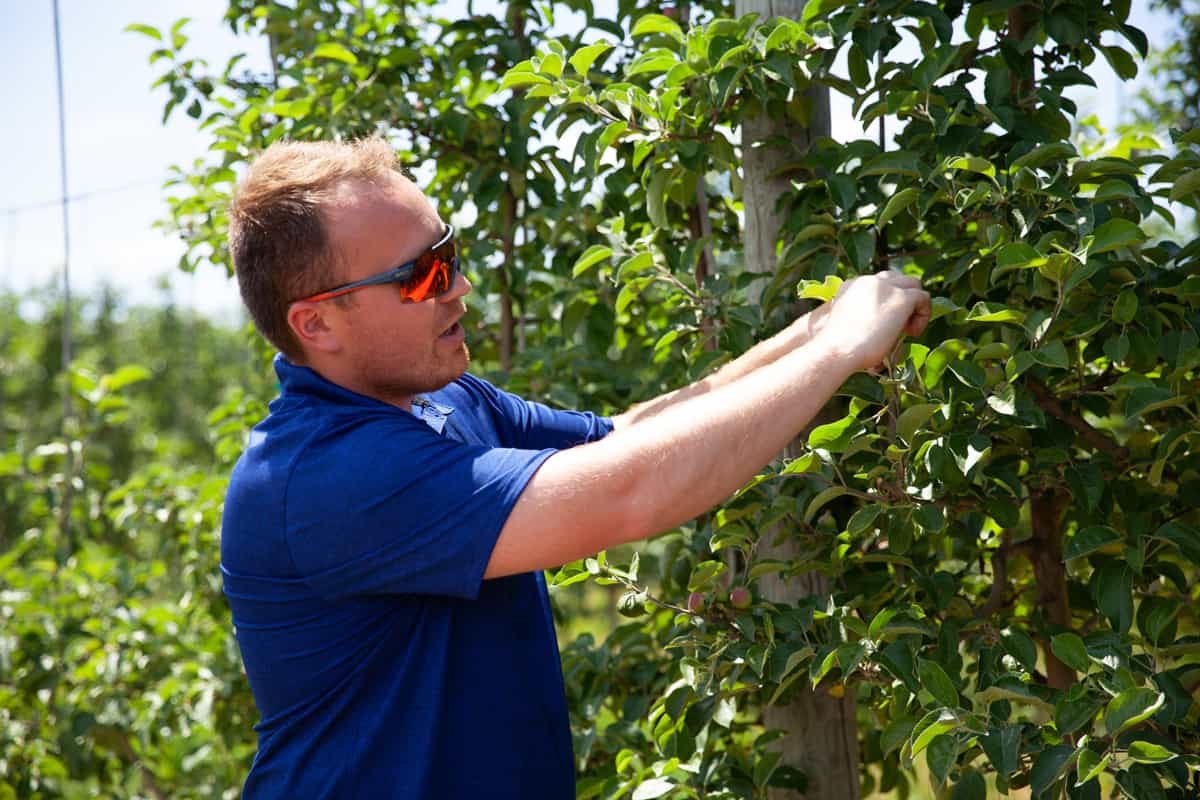 The brothers trusted the process and worked hard to see it through: their orchard, including the Kingston Blacks, has not only survived Northern Michigan’s climate but has also produced delicious, unique fruit perfect for making single-varietal ciders.

“[Single-varietals] are very common in the wine world, like riesling. You know what’s in it because it’s on the bottle,” Max explains. “But with cider, most times you don’t really know what’s going in there. We said, well, why can’t we highlight the fruit and its varieties so you can see the nuances that cider can have. It is a fruit wine, just with apples.”

Often what’s “going on” in a typical Midwestern cider is a blend of apple juices from the average culinary apple (ones you’re probably already familiar with) like a Gala or Honeycrisp. While these apples are much easier to pronounce than some heritage varieties, their flavor pales in comparison, according to Adam Satchwell, head winemaker and flavor magician behind the curtain at Two K.

To get the most out of an apple’s flavor, the Koskelas believe you have to treat it like what it is: a fruit. Rather than making cider like beer, their goal is to express the unique flavors of the heritage apple varieties by treating them like wine.

“The range of flavor you can get out of different apples and cider-specific varieties just isn’t the same as what you’re used to when you go to Meijer and grab a couple of Honeycrisps or Red Delicious,” Adam explains.

Take the Esopus Spitzenburg for example. Bursting with notes of grapefruit and passionfruit and flavors similar to a sauvignon blanc, the “Spitz” as the brothers endearingly call it, seemed like a no-brainer to add to their series of single-varietal ciders.

To get the most out of an apple’s flavor, the Koskelas believe you have to treat it like what it is: a fruit. Rather than making cider like beer, their goal is to express the unique flavors of the heritage apple varieties by treating them like wine.

Although Two K keeps their method to perfect ciders a close-kept secret, Adam says the trick is all a matter of balance between three elements: sweetness, acidity, and tannins.

“I’ll finish the ciders with varying degrees of sweetness. Some will be completely dry with no sugar whatsoever, like the Kingston Black, and some not, depending on what the apple already has going on,” Adam says. “But what I’m looking for is the balance between all the different components [within the apple]. You want all of them presented, no one thing overwhelming, all supporting each other. That’s balance.” 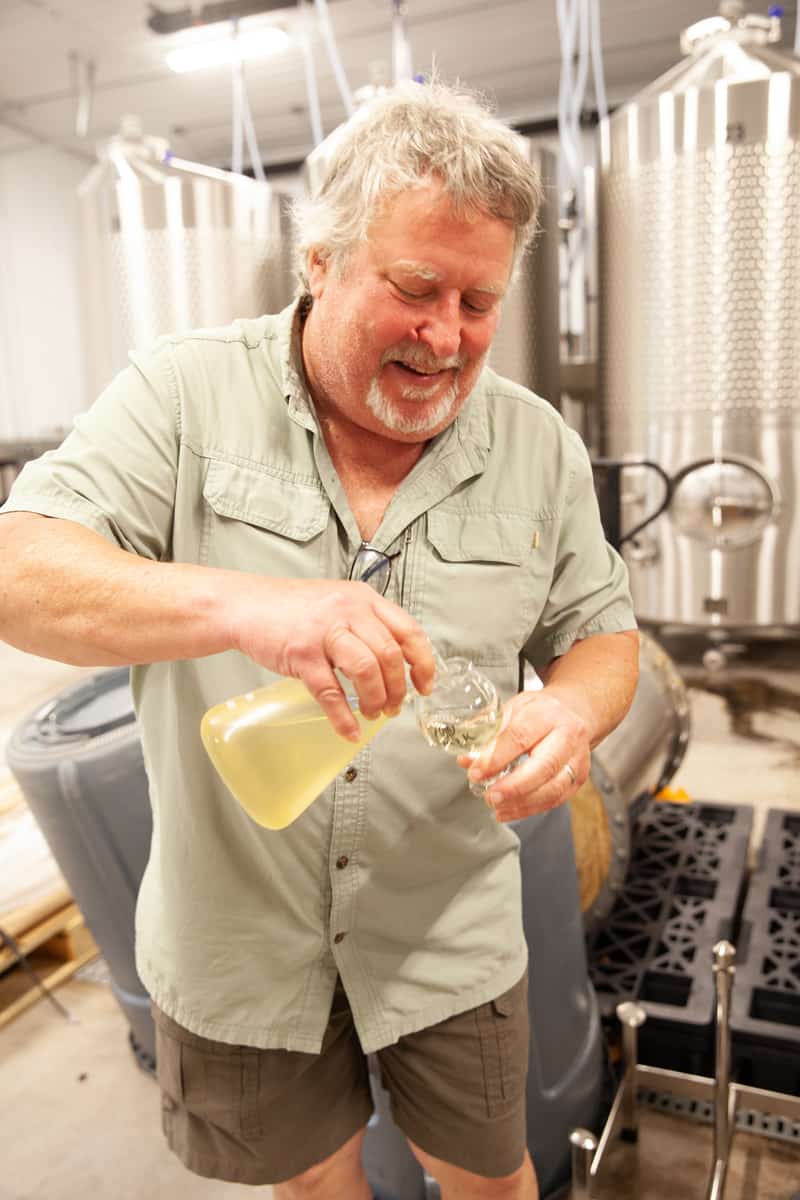 The flavor magician behind the curtain at Two K, Adam Satchwell

This year, three more vintage, single-varietal ciders are being released as a part of Two K’s 2020 Lee Pointe series; the Ellis Bitter, Dabinett, and Harrison. If you happen to pick up a can (or two, or three… we won’t tell!) of the single-varietals on your way out of the tasting room, you can learn even more about the apple you’re drinking. Taking inspiration from wine bottles, Two K designed cans that showcase the fruit and its vintage year, along with each apple’s story and varying sweetness scale on the back.

“We haven’t really seen many people doing single-varietals on this scale here,” George says. “I’d like to think we’re pioneers in the cider world, introducing different kinds to the Midwest.”