This Historic, Coastal-Style Harbor Springs Home is a Piece of Art 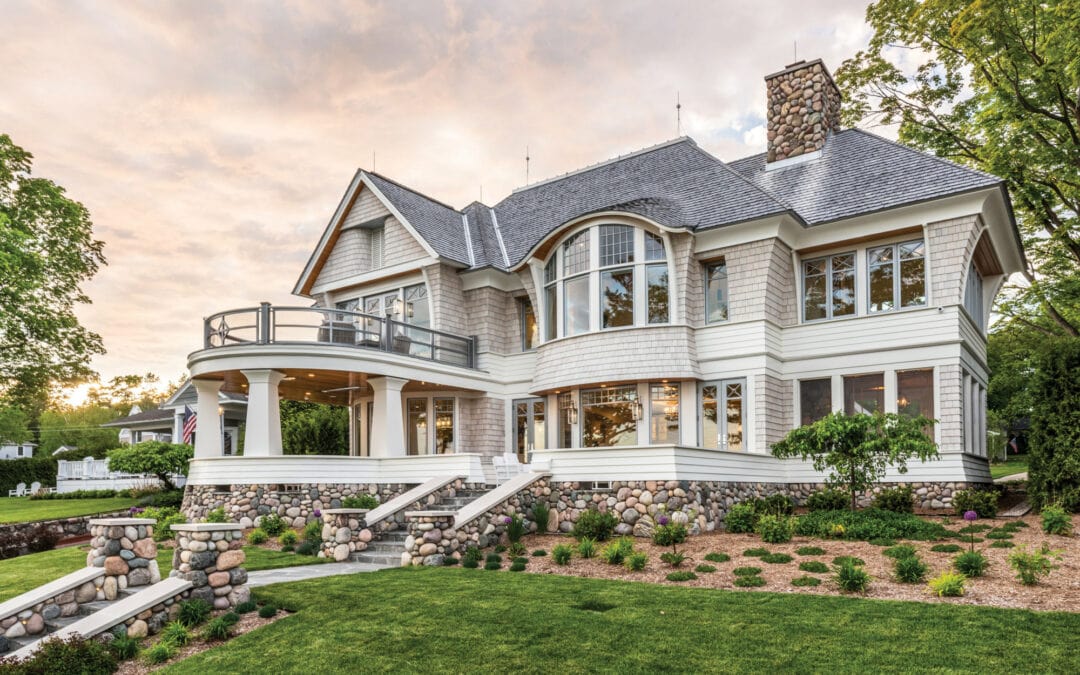 It was cold, rainy and the trees were already bare on the October weekend that these homeowners first visited Harbor Springs—hardly auspicious weather for falling in love with the Lake Michigan harbor town. The couple, who live in Texas, had come for a visit at the behest of friends who have summered in Harbor Springs for years. Dreary as the weather was, boats still bobbed in the harbor and the petite downtown’s white-clapboard Victorian-era architecture shone through the gray. “We saw something really special there,” the homeowner says. So special that six months later they purchased an old cottage up on the town’s famous East Bluff—a gracious, leafy neighborhood with views of rooftops, church steeples and beautiful Little Traverse Bay.

The couple’s initial plan was to remodel the old cottage—among other renovations, they were looking to enlarge their front porch. Doing their due diligence, they set up interviews with four architects and designers, including residential designer Fred Ball, whom they eventually hired. Before meeting with Ball, they’d browsed photos of his previous projects on his website and came away feeling, “that Fred could design our home to fit into the neighborhood,” the homeowner says. 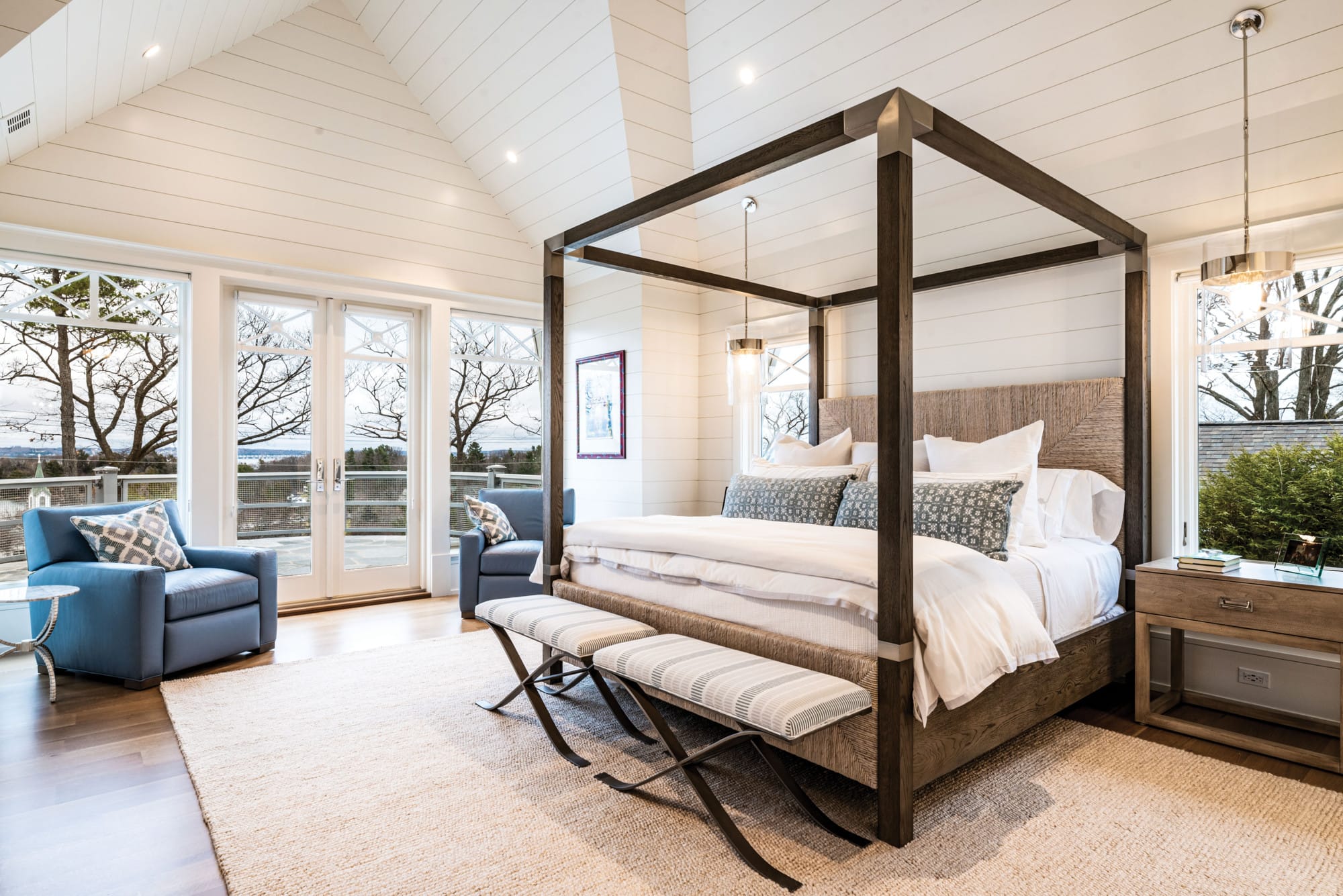 At their first meeting, Ball told them, as had the other three architects, that the cottage needed to be torn down. Then he pulled out his blank yellow legal pad for notes and started listening to what the couple really wanted in their new home. That conversation was the beginning of a synergy that resulted in this spectacular house that graciously steps out of the design box in a number of ways.

Ball credits the homeowners who wanted both a home that fit the neighborhood and also something edgy and so were open to his ideas. Likewise, he credits the team of artisans who turned his ideas into form— including builder Chris Miller and his crew from mPn (Miller, Poineau and Naumes), metal fabricator Greg Melms (whom the homeowners knew previously and brought up from Ohio for the project), mason Jim Temple of Emmet Masonry, interior designer Kelly Konoske of Cottage Company and landscape architect Maureen Parker of Common Ground Landscapes. 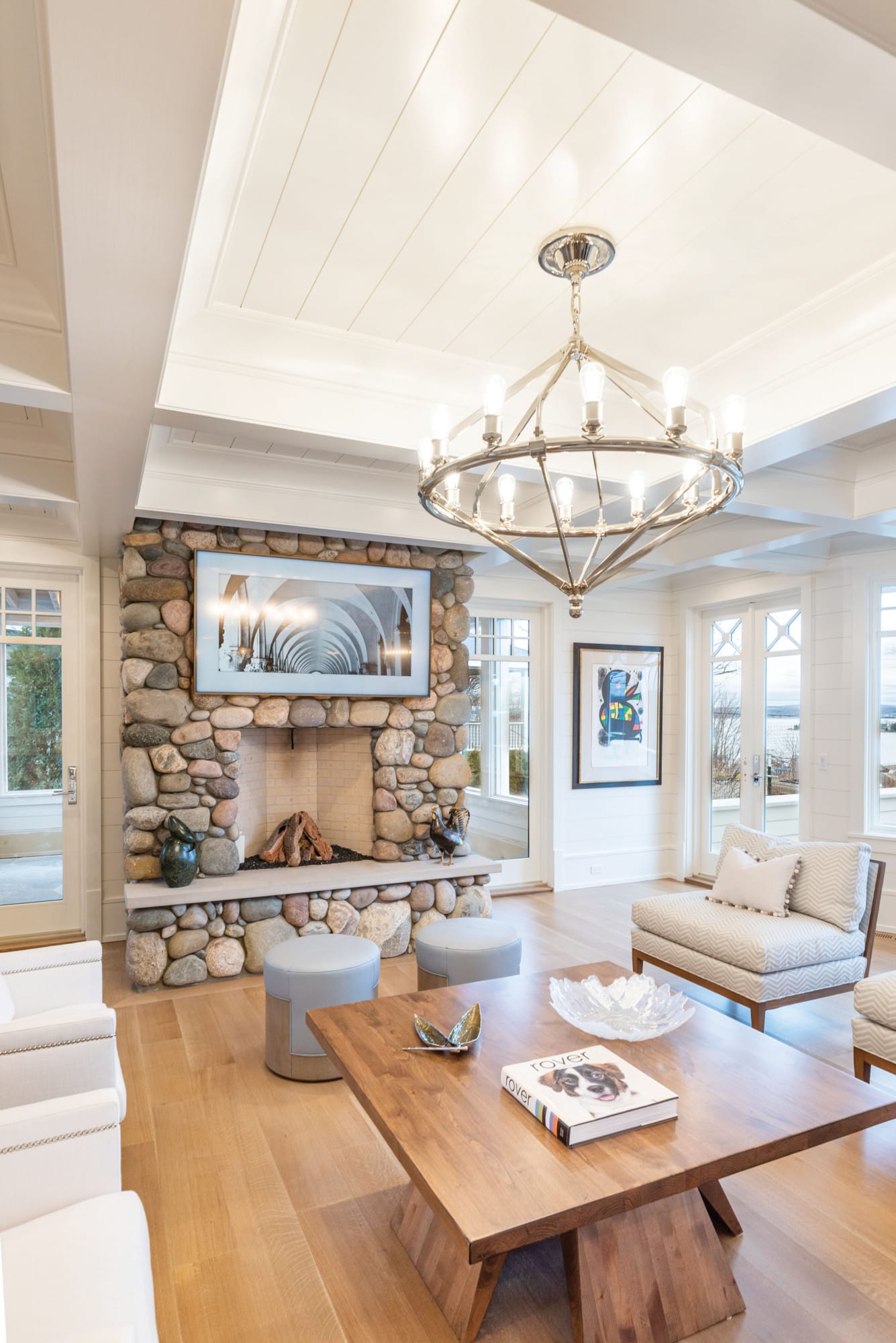 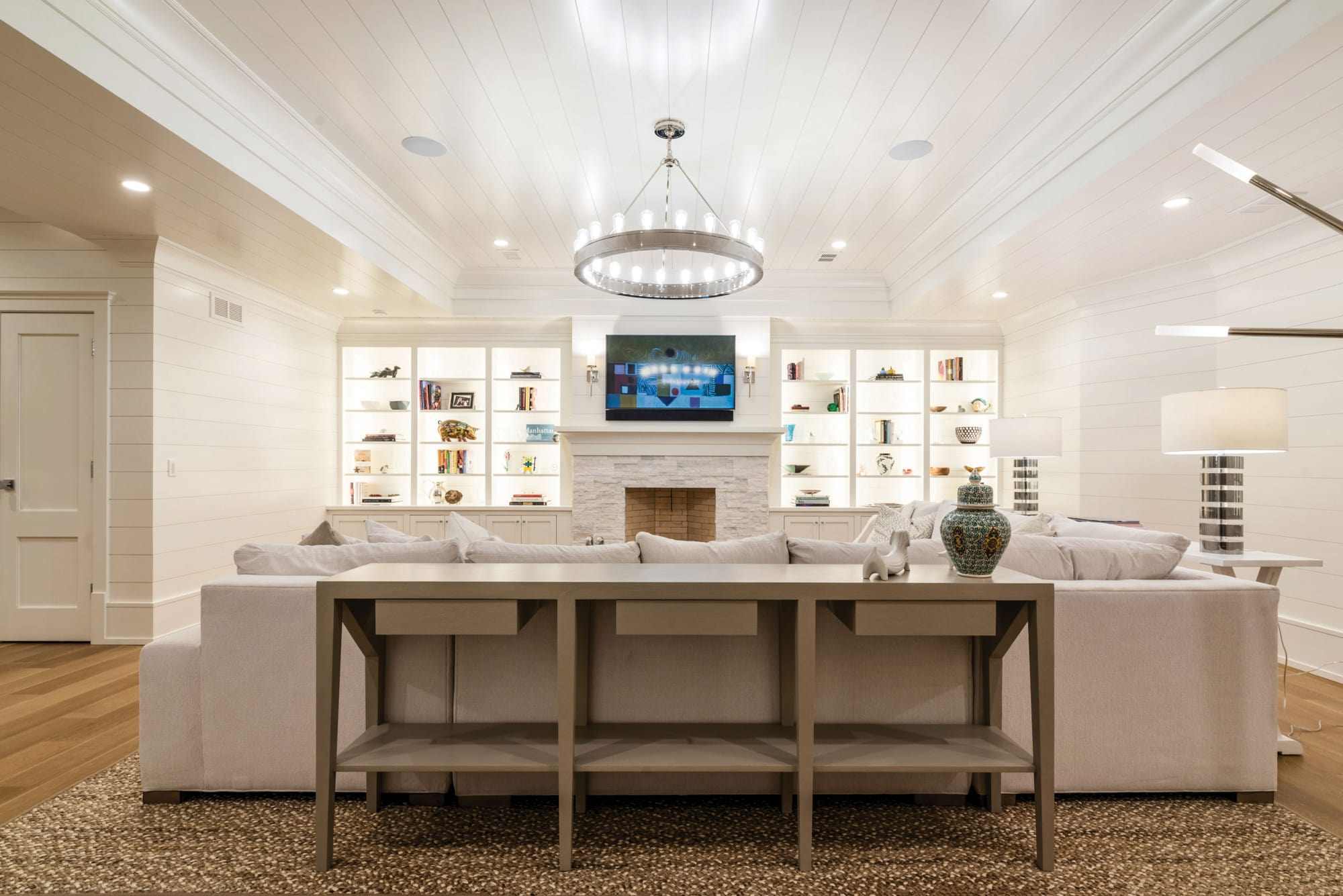 The house that resulted from this collaboration, is, at first glance, a transitional take on a historic, coastal shingle-style home. With its natural stone foundation, cedar lap siding, cedar shake roof, paned windows and its front porch that juts out from the front of the home like an embrace, it fits beautifully into the harbor town.

But look closely and you see the genius—and what Miller says are the details that make Ball’s designs one-of-a-kind. “This house is an absolute piece of art, not just another house,” Miller says. “Every detail is thought out, different and unique.” 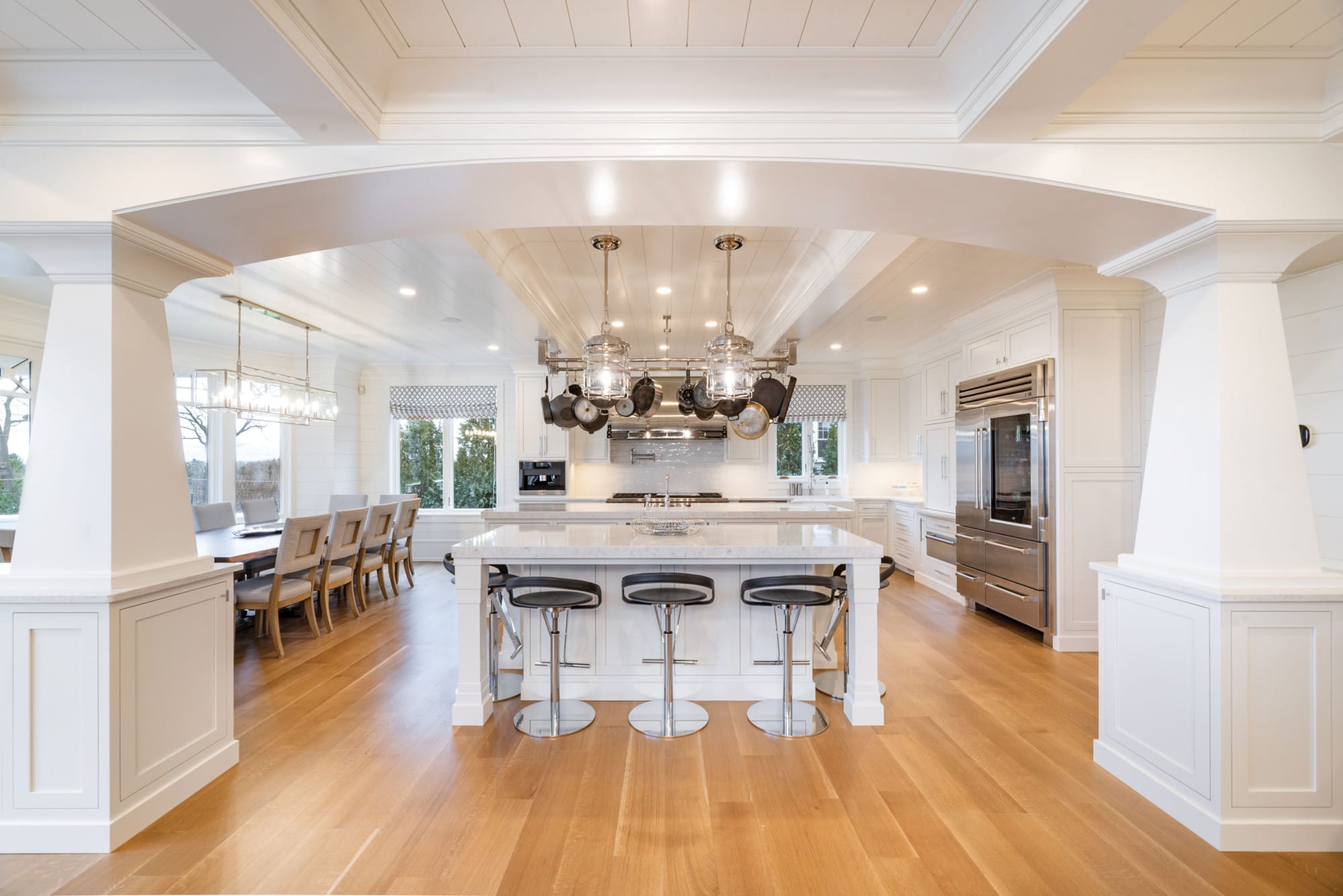 On the exterior, for instance, the walls around the upper story windows flare out ever so and are framed by mPn custom-crafted corbels. The small panes at the top of many of the windows frame a stainless-steel pyramid medallion fabricated by Melms—a motif that is also embedded into the railing in the deck above the porch. Melms also fabricated several stainless-steel lone star medallions, nods to the homeowners’ home state, to sprinkle throughout the home, including above the main entrance to the house.

The porch columns are generous and pyramid-shaped—more welcoming than traditional vertical columns. The soft curve of the porch is echoed in a slight outward bow of an adjacent wall and bay window, and two curved walls of cedar lap frame the gable vent, softening its functionality with visual interest. Ball likes to say, “the devil is in the details.” Although in this home’s case, the details are the angels that carry the design. 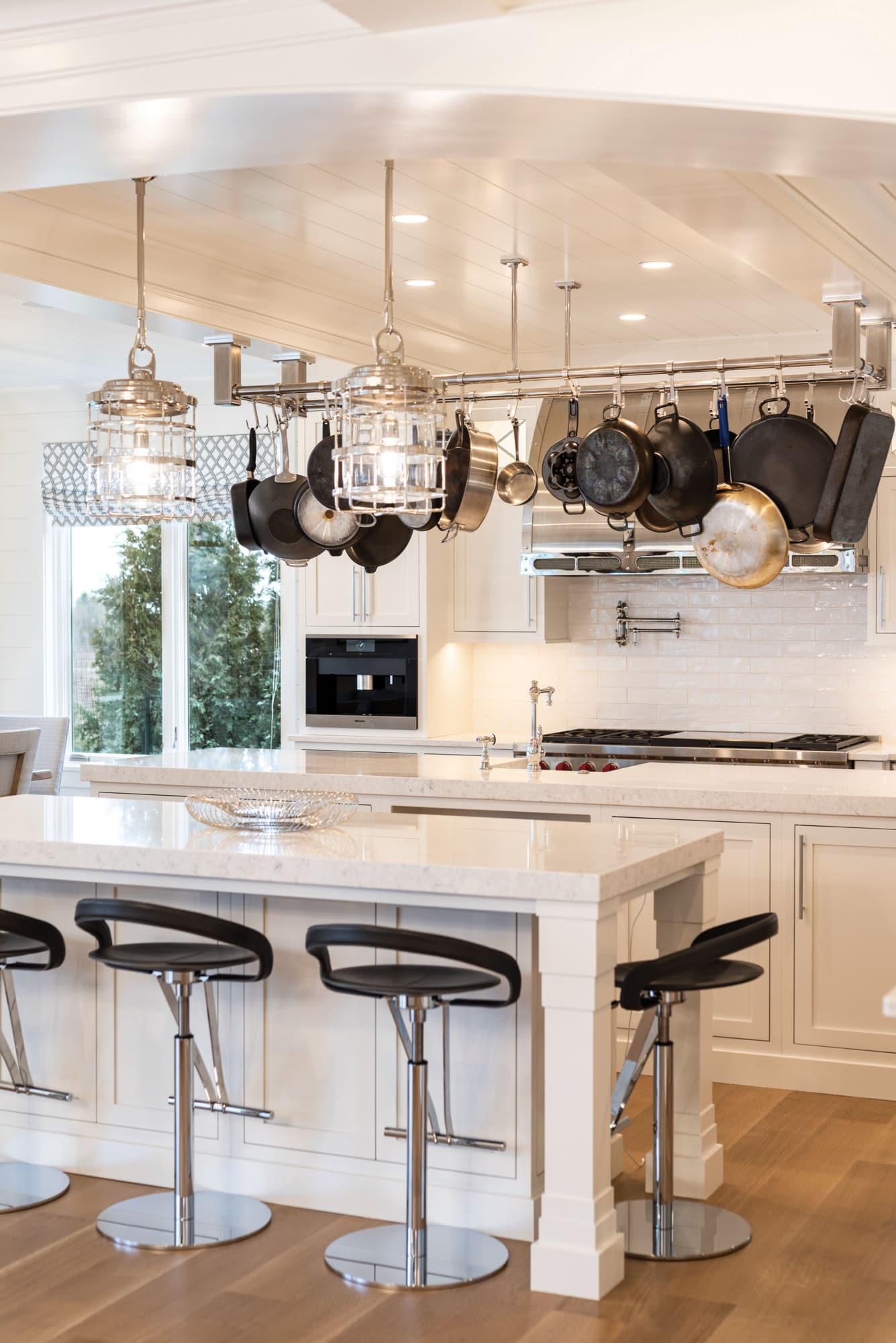 Inside, the home is first and foremost about the views of the charming town below the bluff and Little Traverse Bay. “The house is not deep so that every room in the home has a view of the bay,” the homeowner says. Beyond the views, however, Ball worked to bring the same spirit of detail into the interior as can be found on the exterior. For instance, there is almost no drywall in the entire home, instead, the walls and coffered ceilings are paneled in nickel-grooved poplar, painted dove white. The walls are topped in extravagantly deep, beveled crown molding. The columns that divide the dining room and kitchen echo the shapes of the front porch columns. 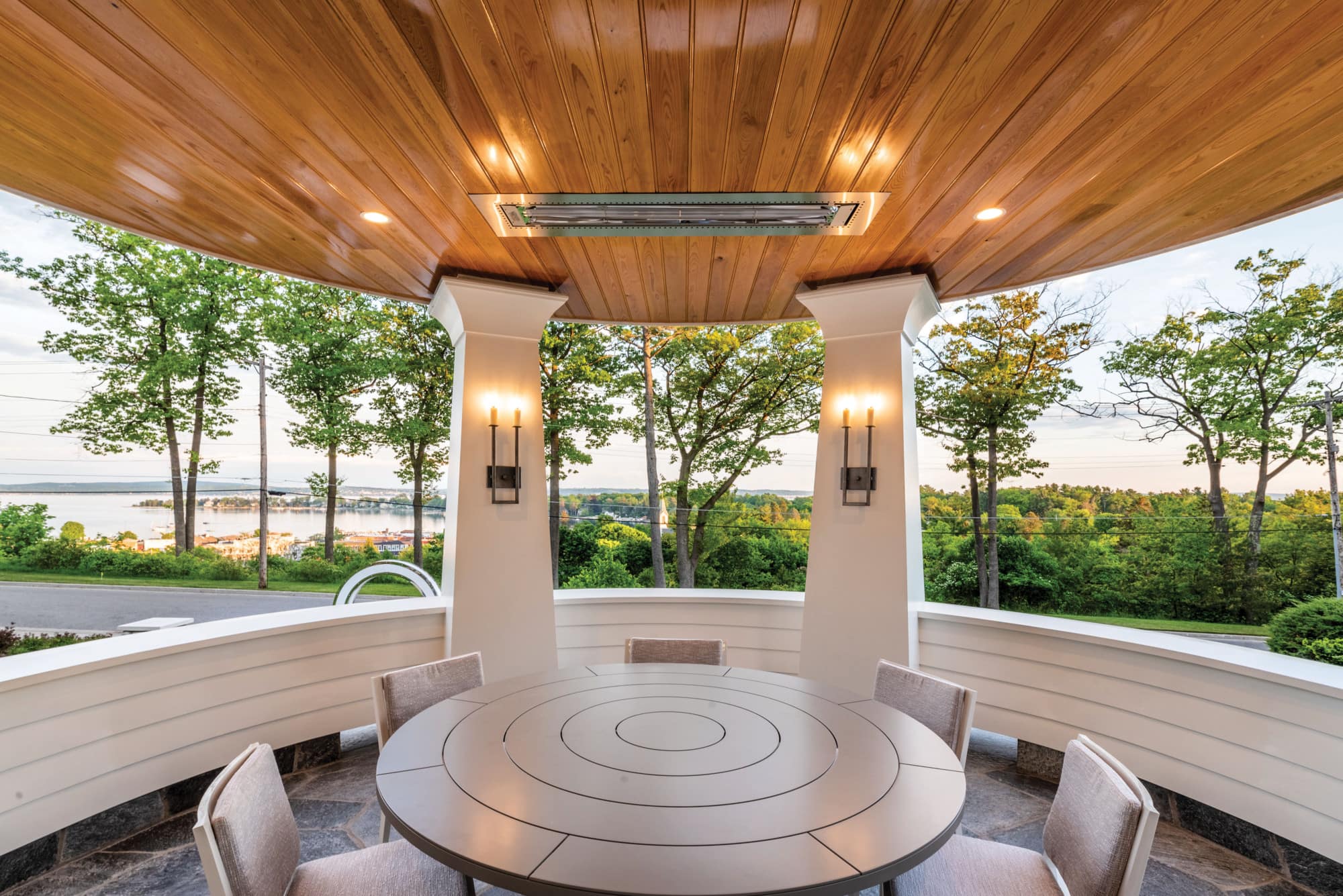 The kitchen befits the homeowner, who is a fabulous cook. The Wolf range is topped with a custom stainless hood by Melms, who also designed the kitchen’s focal point, a magnificent pot rack. A covered, flagstone patio just outside the kitchen houses a Rumford fireplace that the homeowner uses for outdoor cooking.

Interior designer Kelly Konoske worked closely with the homeowners to outfit the rooms with an attention to detail worthy of the structure that reflects their tastes, including art collected on their travels. “Kelly decorated the entire house top to bottom,” the homeowner says. “She got me right away.” Konoske kept the color palette neutral but added dimension by playing off the geometry of shapes—a handsome square walnut coffee table with flared wedged-shaped legs sits in the middle of the living area and directly under a circular chandelier, for instance. The soft, linen-like furniture upholstery is all performance fabric. A fact that the homeowner really didn’t trust until she spilled an entire glass of red on a white chair. “And every bit came out,” she says. 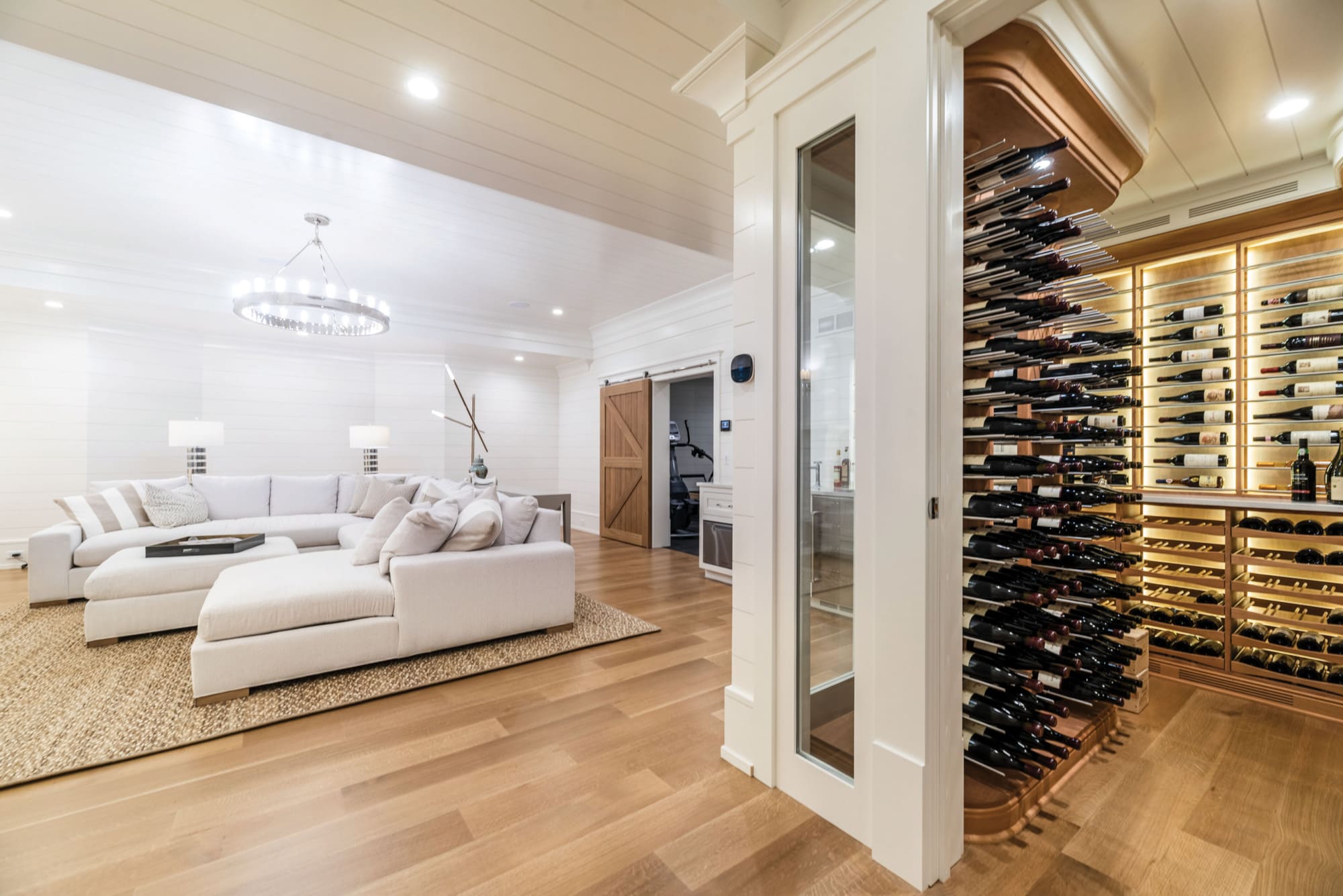 The home is rounded out with a stunning wine room, workout space and steam shower on the lower level. A serene master suite with a commanding view shares the second floor with a guest room—where the barrel-shaped, cypress-clad ceiling makes a memorable impression.

By all accounts, the building of the home was pure joy for the homeowners and their creative team. “A home like this pulls the capabilities and talents of our team to the forefront,” says Miller. “When we get to work with something that Fred designs, our skills really shine.” 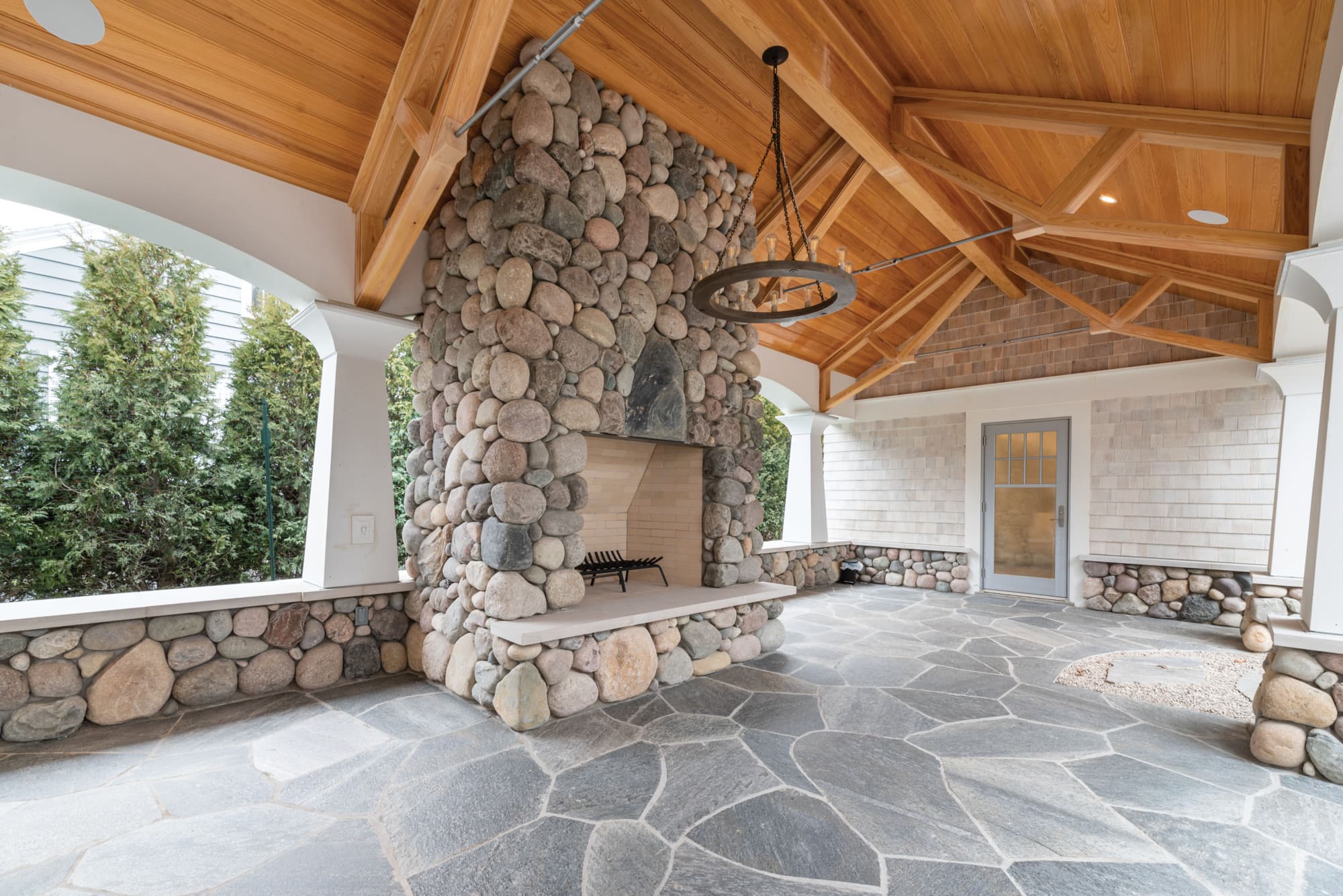 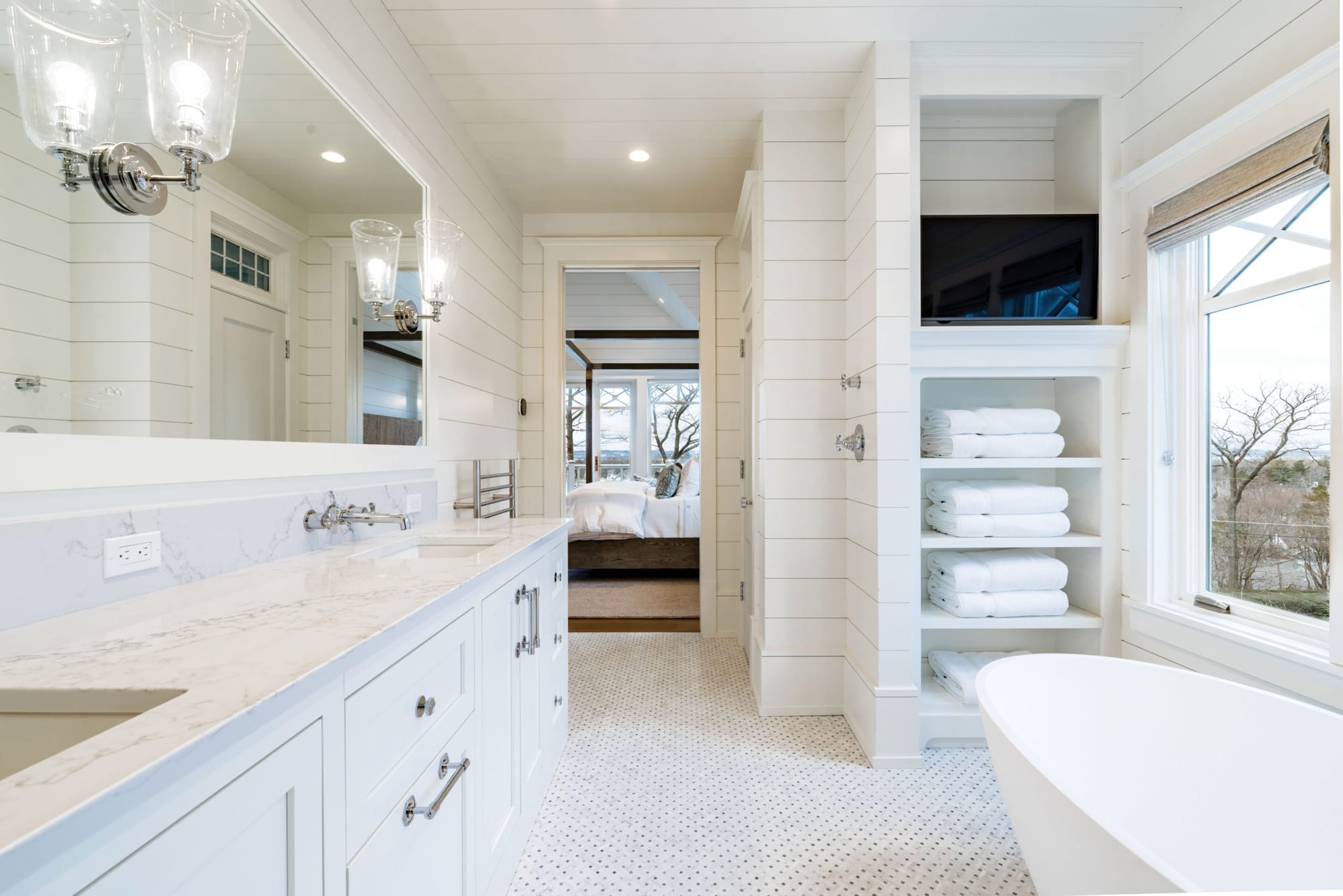