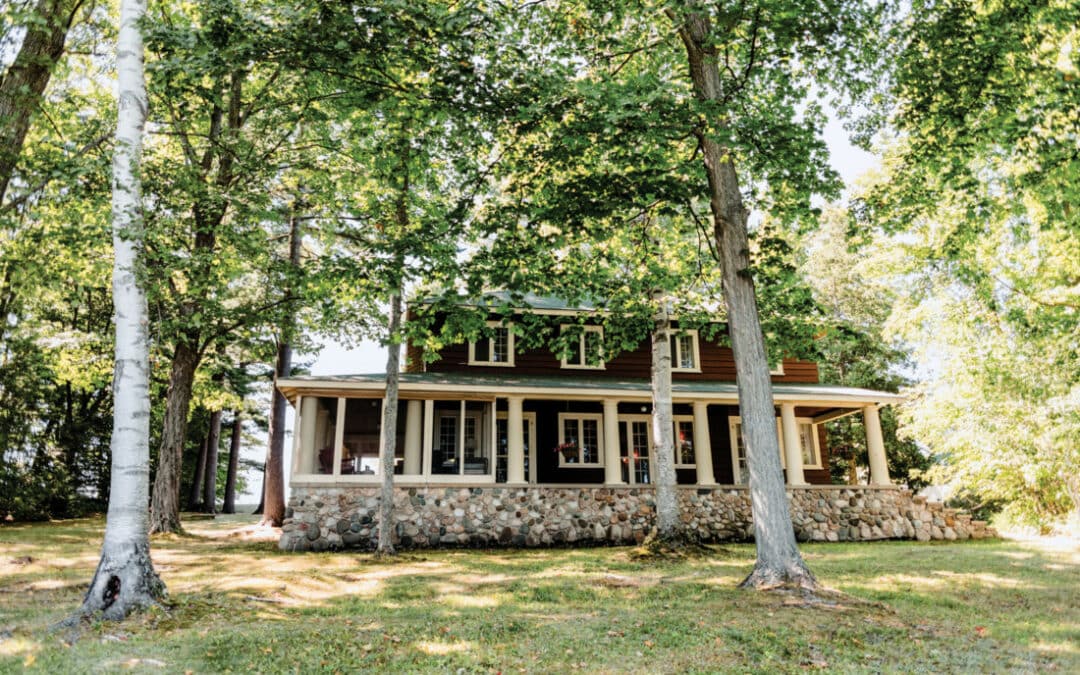 Just a few miles from Elk Rapids on Elk Lake, this storied family cottage has been holding onto memories of the past century. Featuring a dramatic fieldstone fireplace that spans two floors, original iron beds and claw-footed tubs, not much has changed about this Northern Michigan home in the past 100 years. If walls could talk, these cottage walls would have quite a story to tell.
As a kid, I always admired the stately reddish-brown cottage that sits on the northern edge of Elk Lake. I wondered about the people who owned this grand old cottage—its entrance flanked by two pergolas and a long pale-yellow fence along Cairn Highway—just a few miles out of the village of Elk Rapids.

Who were they, and where did they come from? And what must this place look like inside?

I didn’t find out until years later when I met one of the Daane family members, Bob Daane, who, coincidentally, practiced law with my husband, Steve, in Canton, Ohio. My husband jokes that “whenever you and Bob Daane start talking ‘Up North’ stuff, it’s like everybody in the room disappears.” He’s right. Related Read: This Historic, Coastal-Style Harbor Springs Home is a Piece of Art. The Daane cottage was built in 1924, and one can only imagine what she’s seen over nearly 100 years. The Great Depression, World War II, the advent of TV, the moon landing, the invention of the computer, and now, a pandemic. Last, but certainly not least, she stands proudly in spite of the rollercoaster weather Michigan dishes out. She carries on and thrives, allowing the current generations of Daanes to continue making wonderful memories at Elk Lake.

On a summer day in 2020, as I’m pulling into the driveway on my way to meet the matriarch of the Daane family, I’m immediately struck by the dramatic field-stone fireplace that spans two floors. Pink, coral and white impatiens spill out of window boxes, and gorgeous hydrangeas stand sentry near the back door. Large pillars anchor either end of the porch. Gorgeous, mature trees line the lot. Later, as I look through old photos, I realize those majestic trees were once mere saplings.

Undeterred by a global pandemic, current matriarch Barbara Daane traveled from her home in Nashville to summer at the cottage. She’s been doing this since about 1962, when the dashing young Dewey Daane first brought Barbara up to meet his family. It was love at first sight, she says of the cottage. The beauty of Elk Lake awed her. “We could drink water out of the lake back then,” she remembers.

To step into this cottage is to be in a living museum. A portrait of Barbara’s late mother-in-law, Mamie Daane, hangs over the old piano in one corner of the room. A photo of Mamie’s husband, Gil, is over the fireplace. Photographs of Daane relatives are displayed throughout the house. Gil, a prominent Grand Rapids banker, built the cottage with Mamie. “Gil helped with the construction of the cottage, probably while wearing a bow tie,” laughs Barbara. She shares the blueprints with me. It’s unclear who Gil and Mamie hired to actually design and build the cottage. The letters JOB are in the corner of the blueprints, which are in remarkably good shape. Gil passed away in 1974—in his 60s and in his beloved cottage.

Gil and Mamie had a daughter and two sons—one of whom was Dewey, a fascinating guy. Considered one of the most esteemed economic minds of the 20th century, Dewey was appointed to the Board of Governors of the Federal Reserve by President John F. Kennedy, just weeks before Kennedy’s assassination. Dewey served on the board until 1974.

The cottage boasts six bedrooms, with the original iron beds and claw-footed tubs adorning the bathrooms. There’s gleaming woodwork on the railings that lead upstairs and weathered white pine floors run throughout the house.

Even on a sunny day, the cottage is dark inside. The only “modern” accoutrements are a small flat-screen TV, an avocado green rotary dial phone and an answering machine.

Gorgeous Navajo rugs that are close to 100 years old line the floors of the living room. They are in remarkable shape, retaining their color beautifully thanks to careful storage over the winter months. The rugs also line the floors of the large, screened-in porch. The red and brown hues complement the red and black wicker furniture, which are original to the cottage. A day bed piled with pillows and a chaise lounge make for a cozy reading spot on the porch, and a table and chairs offer a spot to enjoy an intimate dinner overlooking their little cove. The porch winds around the back of the house, unscreened. I remark to Barbara that if walls could talk, these cottage walls would have quite a story to tell. The walls are actually one of the first things you notice when entering the living room—they resemble particleboard. Barbara says this material was made by a company called Celotex and frequently used in homes of this vintage. Over the years, there was talk of painting or wallpapering, but it never happened. “The family never wanted to change a single thing!” says Barbara.

The Daanes enjoyed sailing, powerboating and swimming; however, “the jet skis annoyed Dewey!” says Barbara. Dewey swam in Elk Lake well into his 90s, and Barbara still loves taking a daily dip. But it wasn’t just water activities that made for sum- mer fun. There was plenty of golf at the nearby Elk Rapids Golf Club, but tennis was Dewey’s passion. Dewey played tennis every day of his life, Barbara says. “He never had lessons—he was self-taught. He loved it so much. I was a golfer before I met Dewey, but I took up tennis after he came into my life. He was instrumental in having new tennis courts installed in Elk Rapids near the bay to replace the concrete ones.” Dewey’s tennis trophies are prominently displayed in the living room. Tennis was also a huge part of their Up North social life. There were legendary parties every July 6 to celebrate Dewey’s birthday, and the invitees included his countless tennis friends. Barbara used to have special T-shirts made yearly to mark the occasion. After Dewey’s death, these T-shirts were made into a quilt that is lovingly stored at the cottage.

Back in the day, Mamie Daane also entertained frequently and loved decorating with gladiolas. “There were a lot of elegant years,” says Barbara wistfully. In honor of those memories, Barbara lovingly arranged several vases of gladiolas on the day of our Traverse photo shoot.

In the kitchen, the ancient fridge is quite a conversation piece for everyone who sees it for the first time. It’s an old Frigidaire that runs on Freon and is powered by a motor in the basement. “I’m afraid to get rid of it,” laughs Barbara. “If the motor goes out, we’ll be bereft!” Metal ice cube trays remind you just how far technology has come. Fun fact: this is not the original fridge. Decades ago, the Frigidaire company held a contest looking for the oldest working refrigerator in America. The Daanes, confident they would win, entered their original fridge in the contest. Much to their dismay, they came in second place. The kitchen is small. It’s hard to imagine prepping for elaborate dinner parties in such a limited space. The stove, while not original, is from one of Dewey’s three daughters who lives in Northport. Barbara says the stove was given to the cottage to replace the one from the early 1960s. “I used that stove for over 50 years!” she says. Cupboards that reach the ceiling are overflowing with original Fiestaware and lots of vintage dishes and glassware. There is no dishwasher—dishes are still done by hand in a farm sink.

Barbara says there was often a cook and a chauffeur who stayed in the little bedroom attached to the garage. “That was back in the old days, when there were often 14 people visiting for the weekend,” she recalls. When Dewey was a teenager, he and his brother and sister got “shipped up the street to stay in a little motel for the weekend” in order to accommodate the weekend guests, she laughs. The living room has one of the very first 78 rpm record changers ever made. “Dewey was the only one allowed to touch it, and we would marvel when he would put on Rudy Vallée records.” Barbara recalls a summer weekend from the 1970s when she invited her “fancy friends from Nashville” up to Elk Lake. By this time, there was a well; however, the pump stopped working. Barbara recalls the guests schlepping buckets of water from the lake to cook beans on the stove. “They never came back after that!” she laughs.

The Daane family was full of characters and quite resistant to change, says Barbara. The elder Daanes never wanted to change a thing in the cottage, and Dewey was the same way. The aforementioned Bob Daane talked so fondly of his “Uncle Dewey” over the years, that my husband and I felt like we knew him. One need only step into the cottage to feel Dewey’s presence and that of those who came before him. And, like Dewey, Barbara doesn’t want to change a thing.

Kathy Belden lives and writes from her home in Canton, Ohio. She spends her summers on the shores of Grand Traverse Bay. Kathy can be reached at kbelden56@gmail.com.

Courtney Kent is one-half of The Compass Points Here, a photography and videography company based in Traverse City. thecompasspointshere.com.