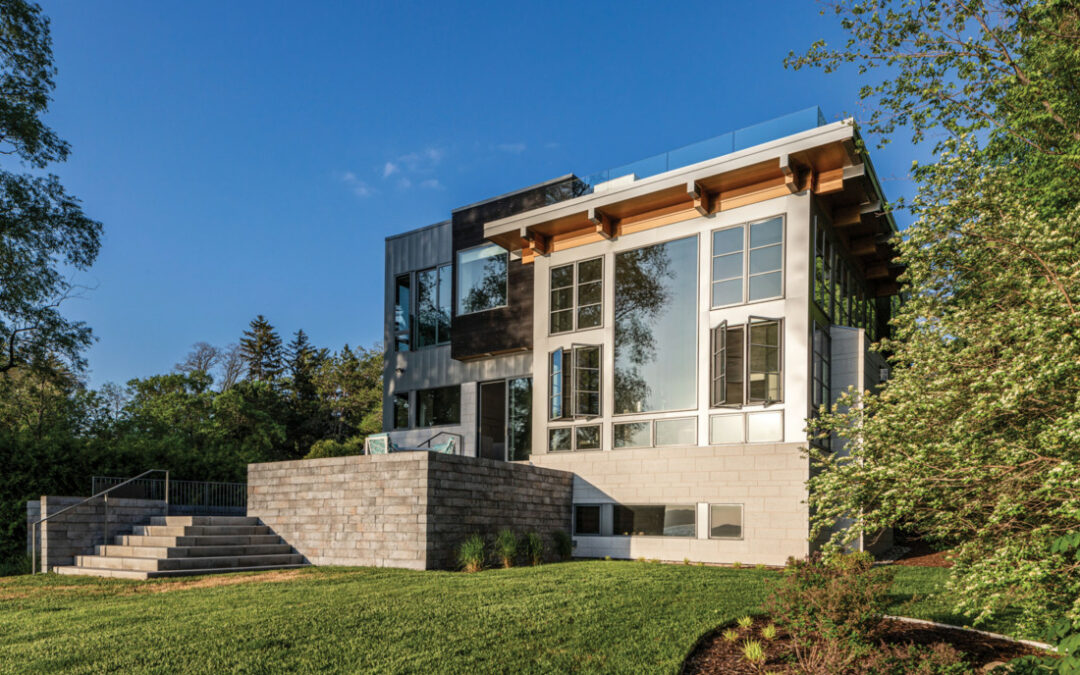 Traverse City architect Ray Kendra of Environment Architects was delighted when his clients told him stunning bay views, modern design and serenity were must-haves for this Old Mission Peninsula home. They were on the hunt for relaxation after a hard day’s work- and it’s safe to say, after looking at the finished product, we too wouldn’t mind cocooning here.

An architect’s job can require a level of diplomacy, a fact that Ray Kendra, a Traverse City architect known for his contemporary/modern design, is well aware of. In the case of the yet-to-be-designed Cocooning House, Kendra had to tell his clients that the old cottage on Grand Traverse Bay they hoped to renovate needed to be razed. In Kendra’s judgement, only the foundation and a basement under the garage could be saved. Turns out, they trusted his judgement.

Next on Kendra’s list was to evaluate his clients’ aesthetic—one they’d said leaned toward modern design: But how modern did they really want their house to be? Kendra’s first plan was for a home with a more transitional-styled slanted roof. Nope, his clients had imagined a thoroughly modern home, and that included a flat roof. 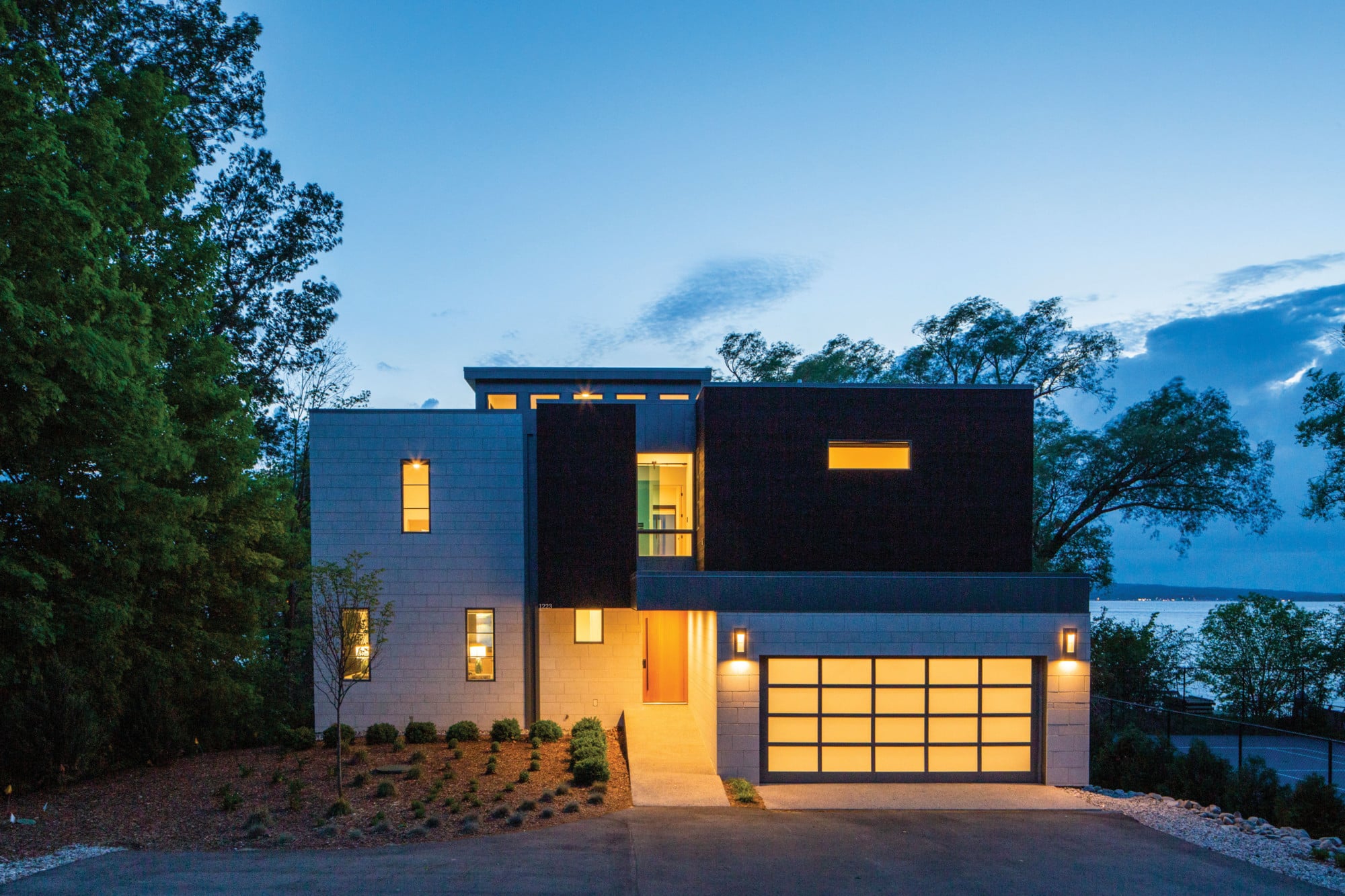 Related Read: This Historic, Coastal-Style Harbor Springs Home is a Piece of Art.

Kendra was delighted. His fondness for modern architecture, he says, begins with the fact that it generally revolves around windows fabricated with huge sheets of glass, offering huge views. “In a traditional cottage, you tend to have a bunch of little windows that just don’t offer the same kind of view,” he says. That is especially important, he adds, in homes situated on water such as this one: “The colors of the bay change over the course of the day. That’s the star of the show in this house,” Kendra says.

His clients agree completely with that philosophy. What’s more, besides big views, they value modern design for its simple and serene flow—a form-follows-function approach. That calm ambiance is especially important to the husband, a neurologist, who needs to decompress after he has been on call, an act he refers to as “cocooning.” “Spa-like” was another term the couple mentioned often to Kendra to describe their vision. 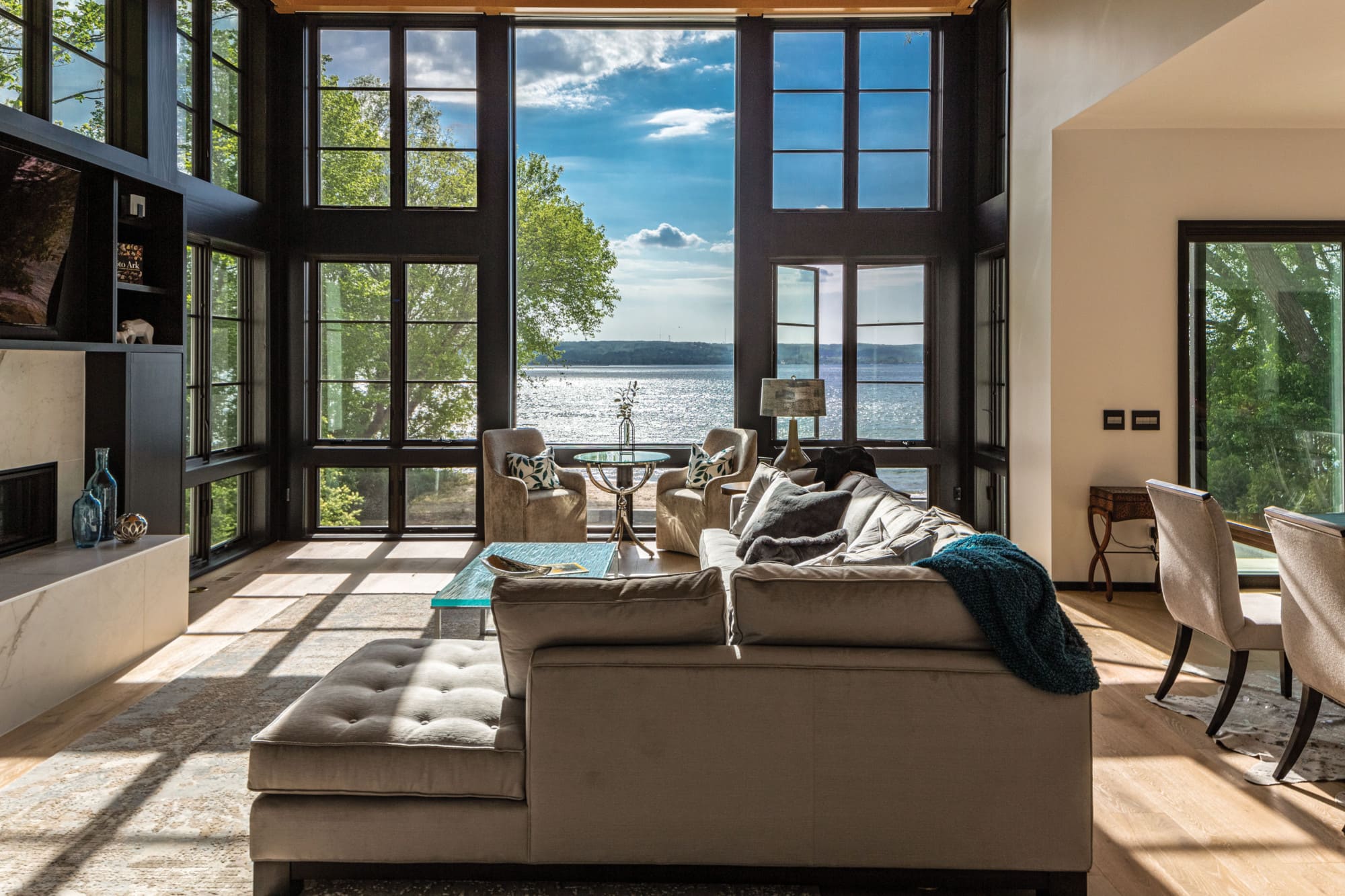 Kendra took his clients’ cues. A number of thoughtful amenities add to this home’s relaxing vibe, but perhaps the most important is the dry sauna he designed on the lower level. The sauna is directly connected to a shower that leads into the bathroom. No dripping sweat on the floor on your way through to cool off.

Up a level, on the main floor, the largest standard paneless window that Pella Windows could supply sets the backdrop. The window is expansive enough to provide full views of some of Traverse City’s greatest attractions, namely, the annual Cherry Festival fireworks over the bay and the semi-annual performances (canceled in 2020 and 2021 due to the pandemic) of the U.S. Navy Blue Angels and the U.S. Air Force Thunderbirds. 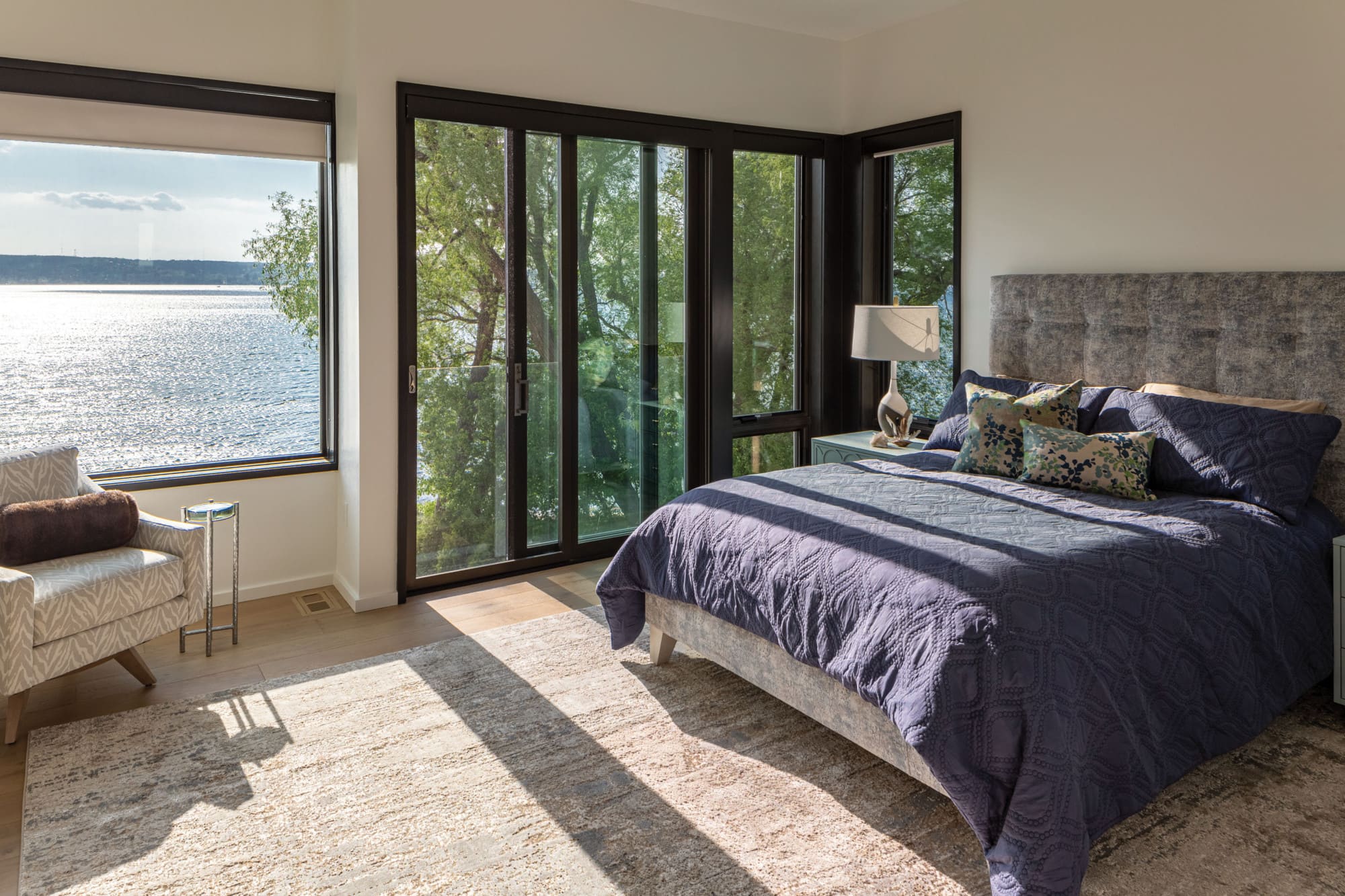 That view aside, the rest of the living area is a study in serenity with its horizontally shaped contemporary fireplace and wide-planked oak flooring stained a pale, beachy shade. The homeowners purchased all of the furniture for the home on a trip to North Carolina, then Kristi Brubaker of Leelanau Interiors accessorized it, grouped furniture into intimate spaces and outfitted bedrooms and baths with linens and other accoutrements. Brubaker and Kendra often work together. “I finish what Ray designs— making the interiors colorful and comfortable,” Brubaker says.

The living area flows into an open, mostly white kitchen. A butler’s pantry/appliance garage keeps the Cambria Quartz counters sleek and clean, in keeping with the simple feel of the home—and belies the fact that the kitchen is a state-of-the-art workspace for the wife, who is an accomplished chef. 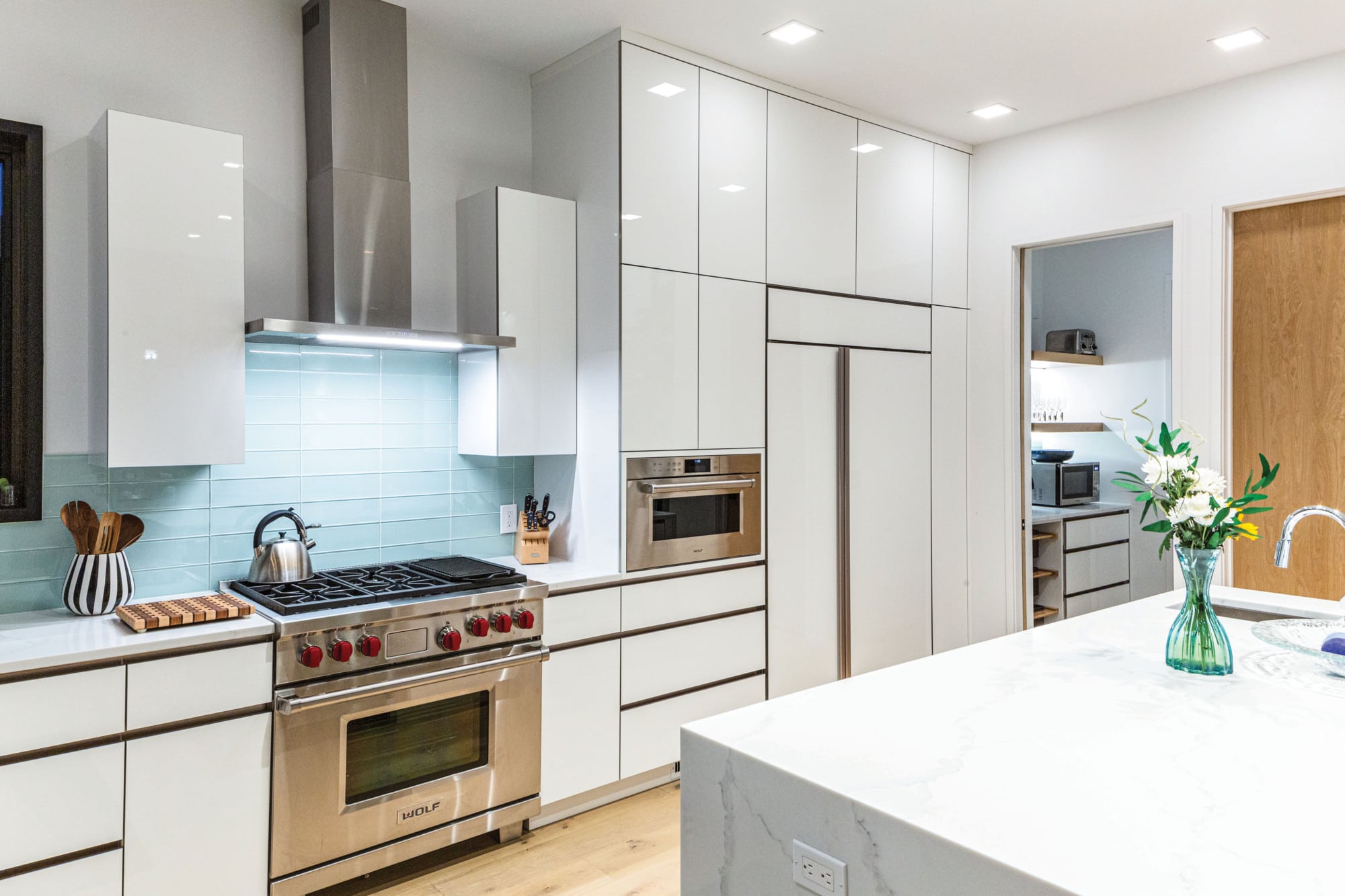 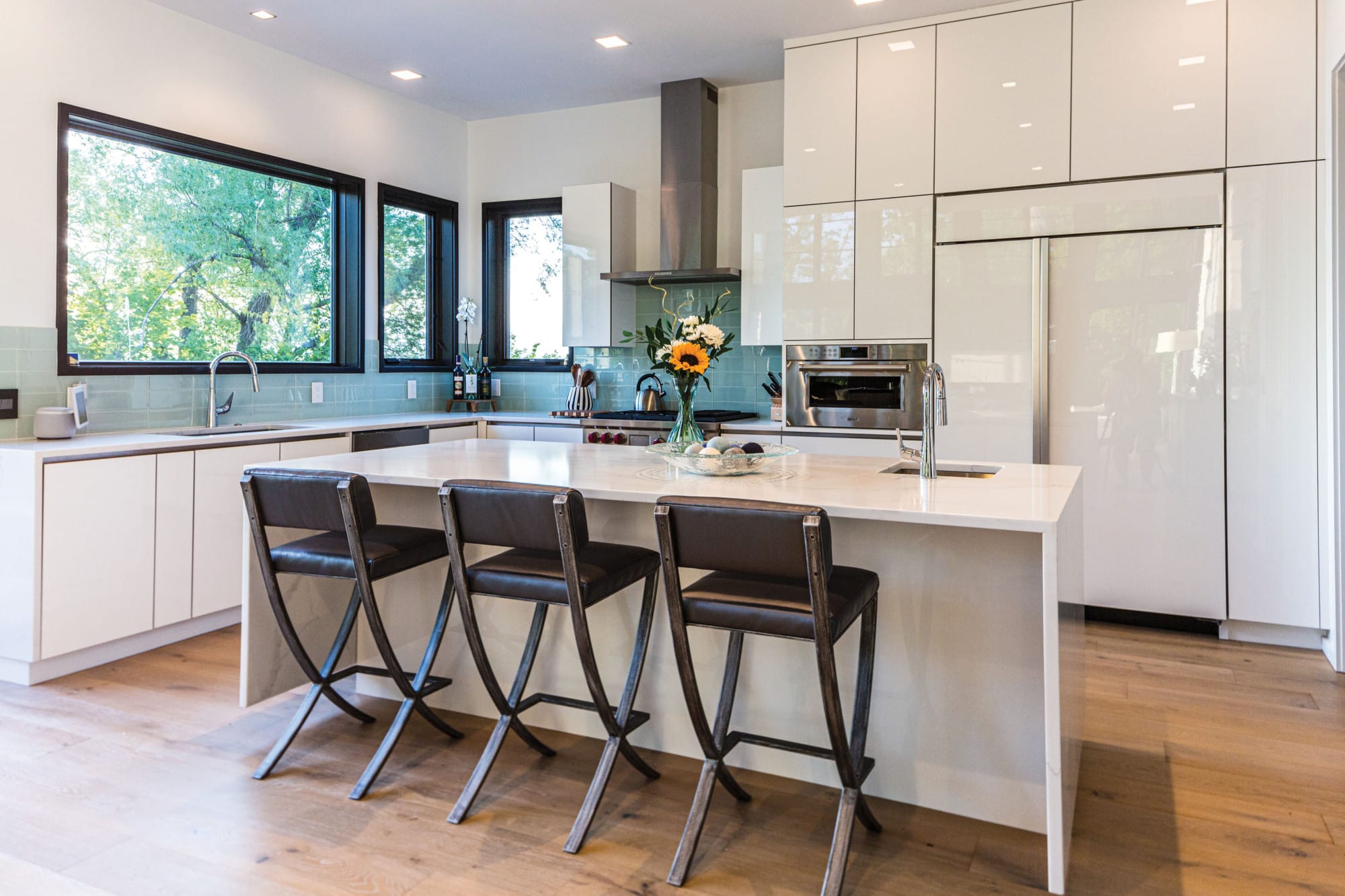 A floating stairway, bathed in light from a skylight in the roof and fabricated from glass, steel and Douglas fir treads, winds up to the third and fourth floors. The master suite on the third floor is equipped with a steam shower that rounds out the home’s spa feel. On the fourth level, the stairway ends in a small space outfitted with a beverage center that opens on to a deck overlooking the bay. Truly, it is the pinnacle of this lovely, perfectly designed home.

The home’s exterior is clad in stone, gray metal and Japanese-style shou sugi ban siding—wood that has been burned to a charcoal and will weather well for years, needing no upkeep. The combination of materials makes the home blend into the landscape while giving it, as Kendra describes, “a clean, polished look.” 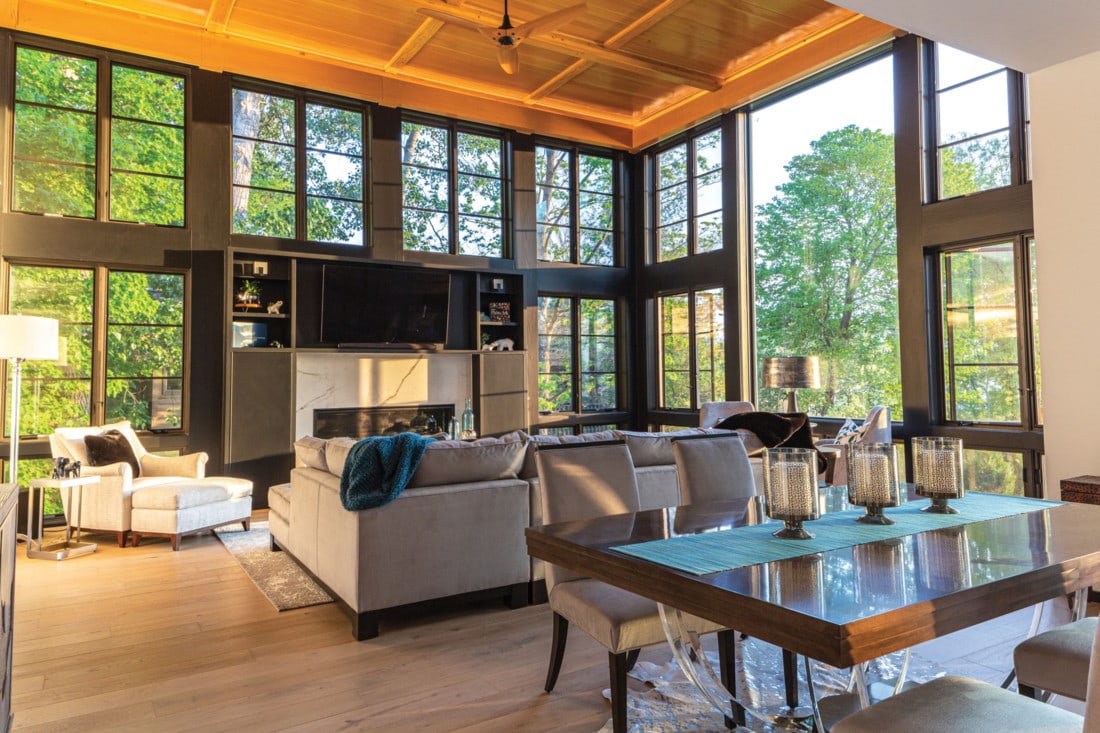 Given that the home’s construction was still ongoing when the pandemic lockdown occurred in the spring of 2020, the building process could have been very stressful. But all players remained calm, including contractor Dave Thompson of LTD Construction, a builder who everyone involved agrees is exceptional. Thompson strapped on his toolbelt and showed up at the job site every day (even many weekends), except during the lockdown. The homeowners marvel at Thompson’s hands-on work ethic, a quality they see as rare for experienced contractors.

The spa, the steam room, the kitchen, the views, the peace that comes from a collaborative building process, all go into making this home feel like a cocoon. And all involved agreed that lockdown or no, it’s a home that you just plain never want to leave. 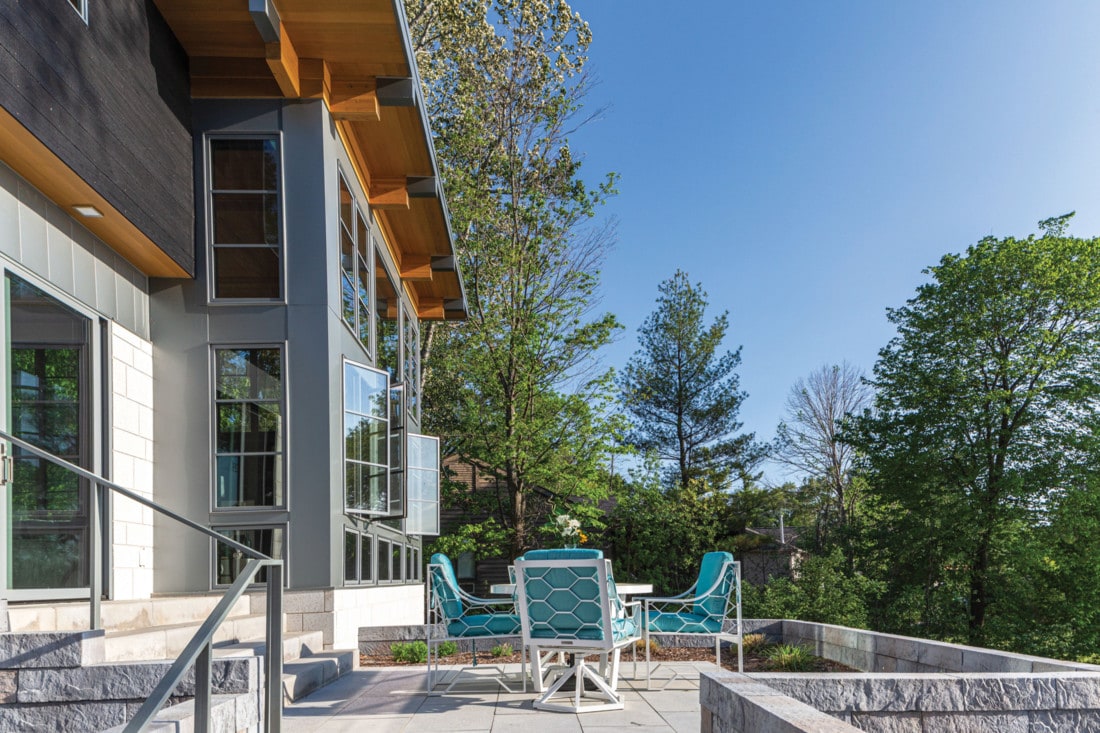 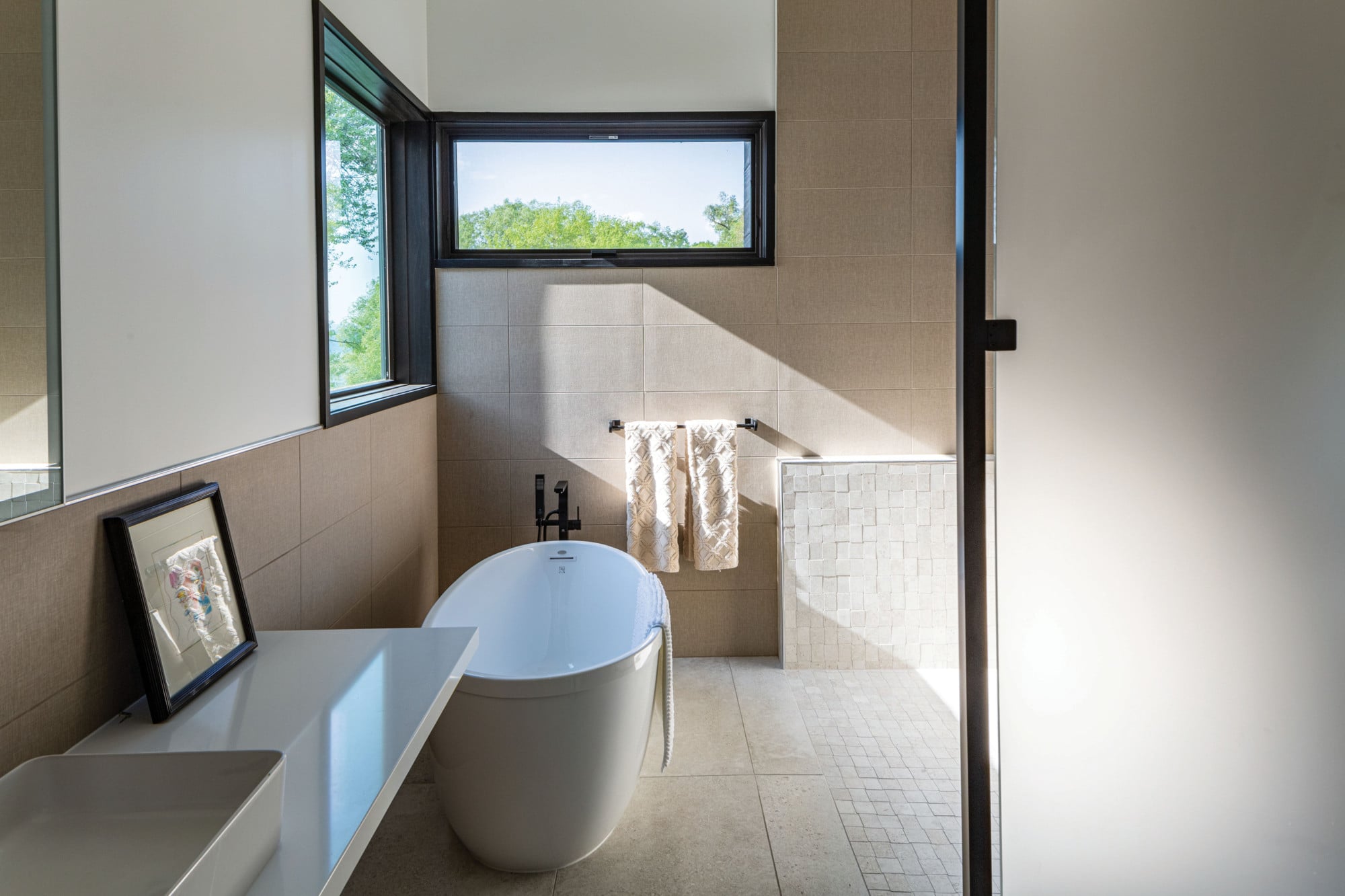 Visit our Northern Homes & Ideas page, preview and purchase our digital issues or subscribe and get Traverse delivered to your door each month. Northern Home and Cottage is a bi-monthly supplement of Traverse, Northern Michigan’s monthly magazine.