Your Mackinac Island Vacation at the Renovated Mission Point 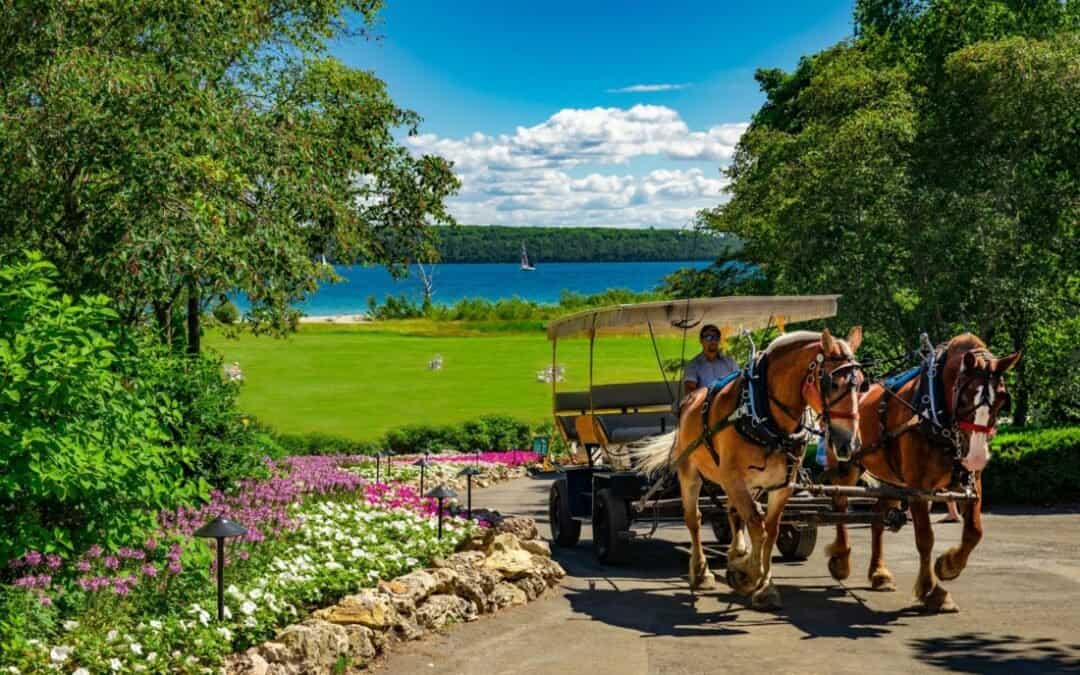 A huge renovation at an iconic property and a declared ‘Year of Celebration’ combine to make this a great time for a Mackinac Island vacation at Mission Point Resort.

We’re reclining on two of the 80-plus Adirondack chairs scattered enticingly out on a wide green lawn, uttering a long overdue sigh of relaxation as we watch the sun glistening on the Straits of Mackinac before us.

To our right, a father and two young sons are golfing on a waterfront putting green that edges a stretch of shoreline where beavers often take a morning swim. To the left, two women are toasting to friendship with a cocktail to go. And in our own section of lawn, perfect for lunching, my husband and I are breaking into a new striped picnic basket adorned with the logo “Mission Point Picnic Society” and filled with just-made sandwiches, Michigan-made chips and a bottle of Mission Point bubbly. Our newest family member, 8-month-old puppy Meeko, is sitting at our feet as a massive freighter rounds a bend before us.

Add in the clip-clop of horse hooves that will follow in a few minutes from the carriage heading up to the entrance, and you may catch a bit of a glimpse of what awaits on a visit to Mission Point.

What may still be hard to visualize, though, is the way you’re somehow transported to an instant state of vacation in just minutes after the carriage stops on the grounds—exactly as the resort’s innovative owners have intended. 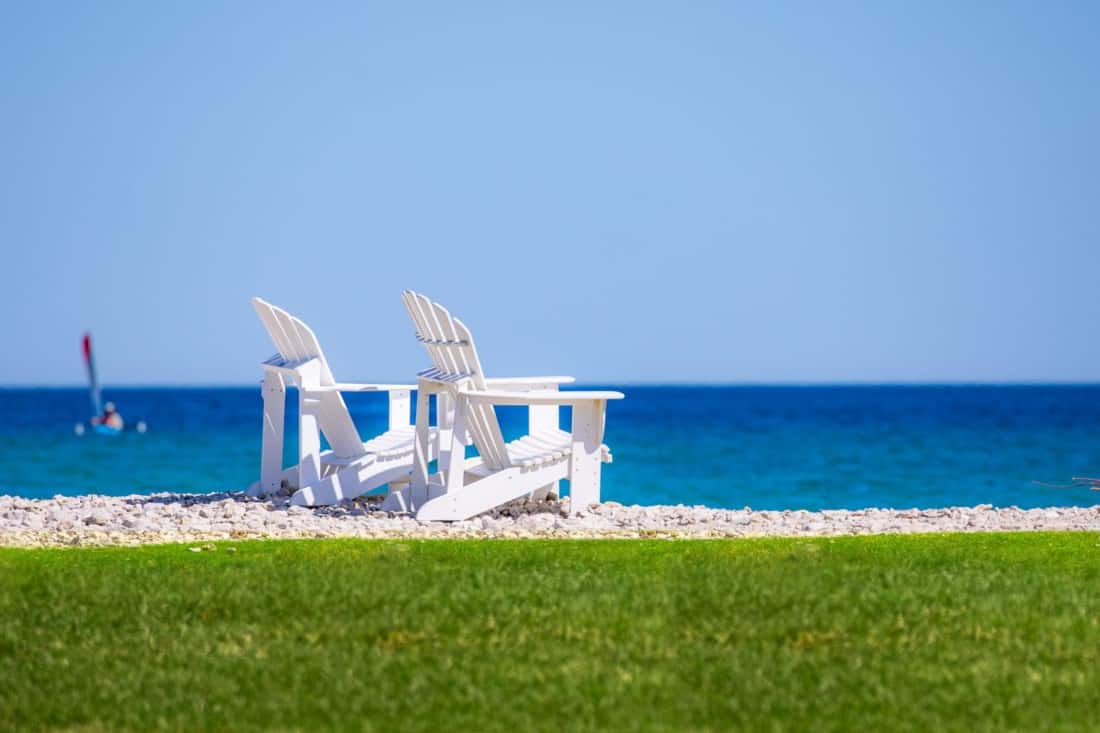 Mission Point has renovated the entire luxury lodge to embrace or exemplify the colors of the island, the laid-back vacation life and sense of peace and rejuvenation that’s been sought—and found—on this easternmost island point for centuries.

There’s a new spa with signature treatments revolving around the island’s ubiquitous lilac bushes, a promenade deck with a stunning elevated view of the Straits and a conference center with bright, welcoming space to gather. They’ve even developed the Mission Point Picnic Society and related gear, all in recognition of the need for a bit of extra care and reconnection following the pandemic. Packages encourage expanded multi-generational travel, girlfriend getaways, work retreats, and even (with the “Pooch at the Point” package) stays with the family pet.

“We know people have had a really hard time with the pandemic. We don’t really know all the effects of it, but we do know when people come here they just want to relax and reconnect,” says Liz Ware, the resort’s vice president of sales and marketing. “We have to be able to provide that extraordinary Mackinac Island experience. We have really worked with our team to say, we always care, but we’ve got to care even more so because people need a little extra love this year. The team’s like, ‘Ok. We’ve got this.’”

Read Next: Plan a Wedding on Mackinac Island at Mission Point Resort 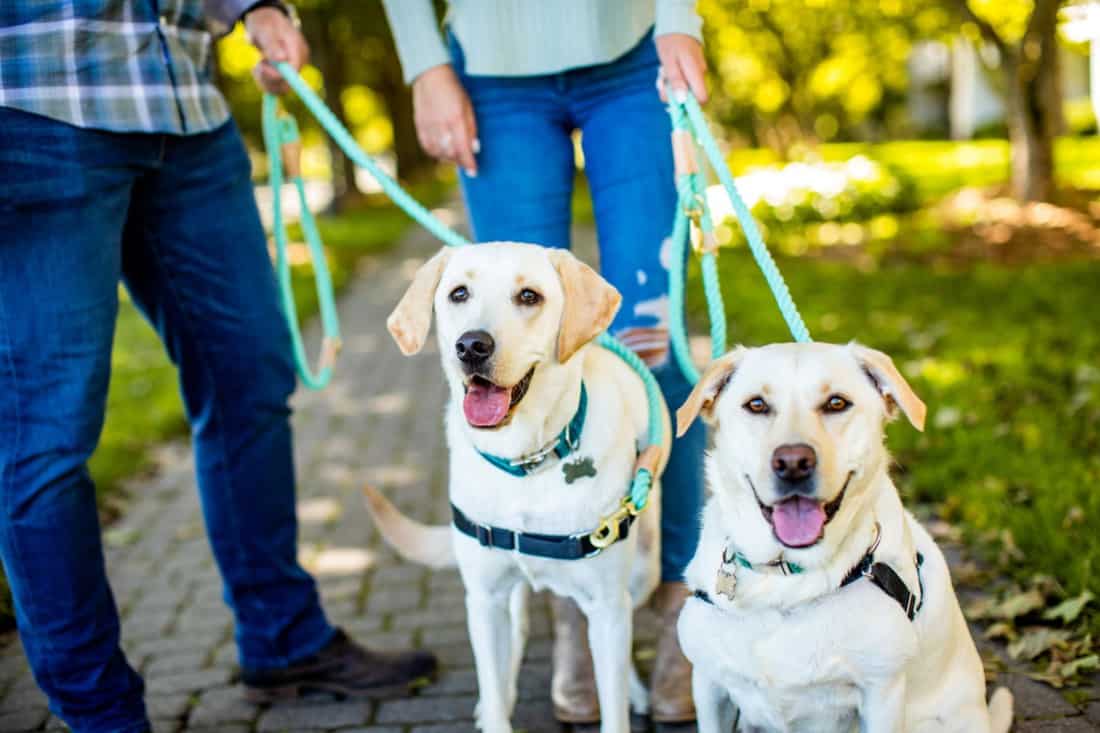 Our resort experience starts with a greeting that feels, well, extra in the best kind of way. In keeping with Mission Point’s belief that pets are family too, we’re not only allowed to bring our dog, Meeko, but a message board behind the check-in desk also reads “Welcome Kim, Karl and Meeko.” In the room, that greeting is accented with a bag of dog treats, a collapsible food and water bowl and a bag holder for doggie cleanup time—all addressed to Meeko.

We aren’t the only family to bring along a four-legged member during our stay—though others have come with various members of the family, good friends and colleagues. Perhaps due to pandemic pet trends, the resort sold more dog-friendly packages in 2020 than it did in either of the two previous years, in spite of a season shortened by two months. And those who don’t bring an animal along but want to hang near to one can head to the concierge desk. There, concierge Pat Driscoll shares her space with her unusually laid-back border collie and most popular resort employee, Nick. But there’s far more to a resort stay than a dog and pony show.

Over the course of six years, since the Wares purchased Mission Point, the resort has completed more than $12 million in renovations to update and beautify guest rooms, elevate the dining program, add a spa and raised wedding and gathering pavilion and update a conference center that offers space for large groups to gather as well as smaller nooks for remote work or schooling. Throughout, the renovations offer a color scheme that brings the island in and also evokes a vintage vacation vibe. 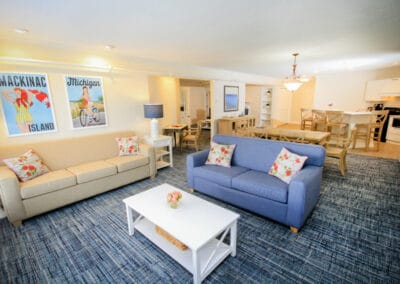 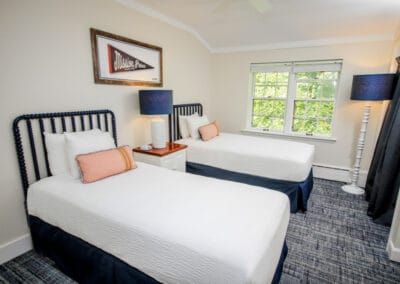 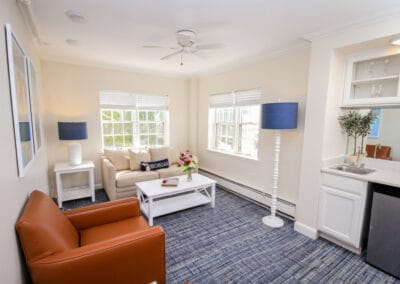 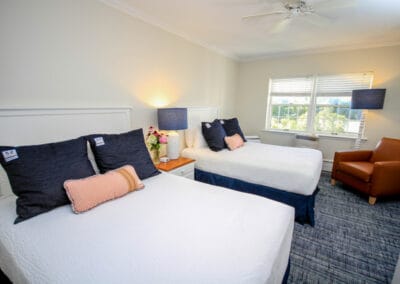 A former artist-in-residence at Mission Point, Ginnie Cappaert, created block prints with lake hues that hang throughout the recently re-done Straits Lodge. And Ware’s twin girls were the inspiration for the framed mid-century-style posters, one of a young girl on a bicycle, the other wearing a vintage bathing suit and headscarf, done by Lisa Angelilli of Earth 2 Earth and Michigan Mittens in Pontiac. Also created by Lisa are Detroit Denim-made, lake-colored throw pillows decked out with pennants to give a nod to the resort’s history as an island college. Throughout, the colors evoke what’s out the windows.

“You see the different blues in the art and carpeting,” Ware notes, “and you can look outside and see the lake blues and turquoises and rock colors. It’s very calm and relaxing.”

A Past and Present Both Filled with Peace

When staying on the sunrise side of the island, you get up early to watch a nature show as you’ve rarely seen it. We’re up well before the sun on the first full day of our stay to take a resort-led hike that (despite the crazy 5:45 a.m. start) would prove well worth every second of sleep missed. Recreation director Cameron leads my husband, the dog and me up a steep road to the rocky outcropping known as Robinson’s Folly. We snap photos and chat until the sun ascends over the horizon and we catch it from 127 feet above the Straits. We extend the hike to see another notable formation, Arch Rock, before heading back looking forward to a balcony breakfast with another notable water view.

Back at Round Island Kitchen, waiters serve us hash made from fresh-caught whitefish, fresh berries, chicken and waffles and thoughtfully include a dish of ice water for the pup. We’d heard how Executive Chef Randall Cox had expanded the resort’s farm-to-ferry concept and now sources from a handful of regular farms. Partly as an excuse to linger in the sunshine over another cup of coffee and the view, we start planning ahead by browsing dinner menu items like asparagus risotto and zucchini fritters on the formal Chianti restaurant’s menu, and note that we will not miss the faux apple pie shaped like a bright red apple with filling inside. 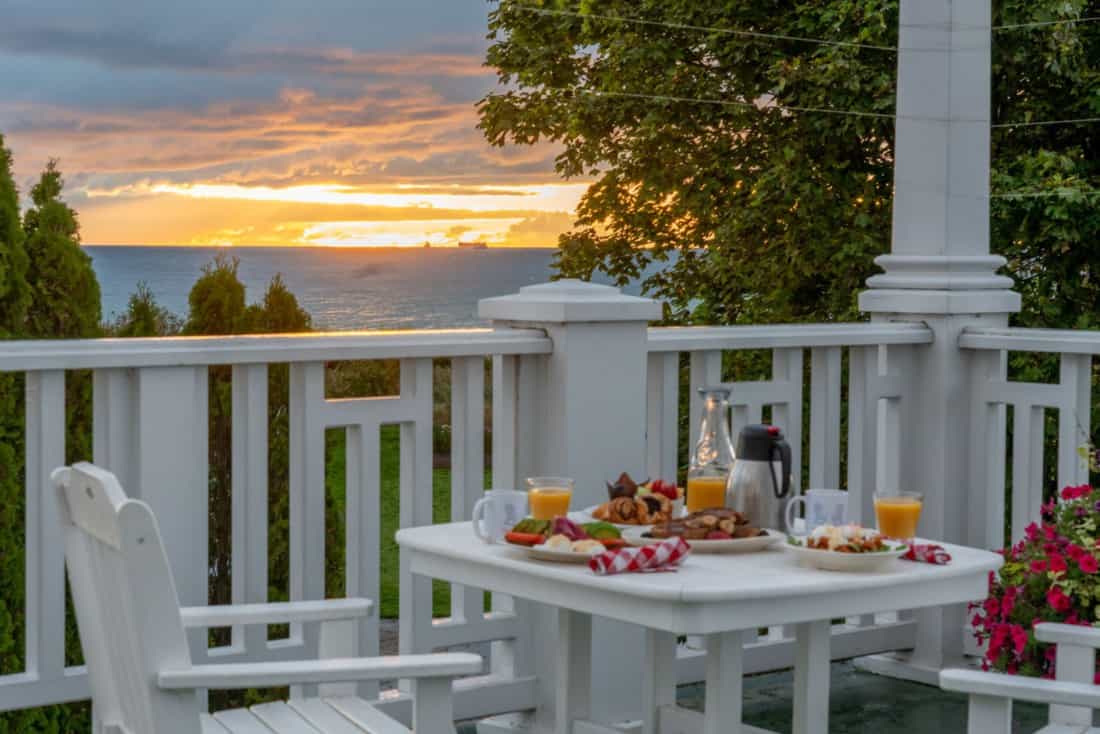 It’s easy to burn off the calories we’re only thinking about with the resort’s rental fleet of sleek, vintage-style custom rides from Detroit Bikes. We take our rentals on a trip around the island—dog situated happily in a provided pet Burley—and also to tour some historic (pet-friendly) stops within Mackinac State Historic Parks, such as the Biddle House, where the interpreter shared stories of island history amid the aroma of freshly baked bread, whitefish stews and hugs for the pup. But you don’t need to leave the grounds to hear tales of the past, not when you can catch a history tour led by concierge Pat and sidekick Nick.

The first stop on Mission Point’s history tour is the lobby itself, a space characterized by the massive beams arranged as a giant teepee. Concierge/historian Pat encourages us to look around so that what we see next—photographs of volunteers from around the world hauling those massive beams across the frozen Straits—are all the more impressive. Even more so is the way the young men are beaming. Their work was done, she explains, to house the headquarters of Moral Re-Armament, a moral and spiritual-based international peace movement spawned from World War II. The enthusiastic group morphed into the high-energy Up with People touring group, and their departure saw a college take over Mission Point. The four-year Mackinac College was formed to train diplomats and others to similarly spread a message of peace and reconciliation.

“I call them the hippies of the ’30s and ’40s,” she says of the activists who spawned the Moral Re-armament movement. “They wanted world peace.”

Pat and Nick then lead us outdoors, where we pass some of the impressive gardens (which have their own tour) and a raised promenade with spectacular water views and a tent ready for larger celebratory gatherings—all part of Mission Point’s vision of expanded places for people to gather. Even if you’re not celebrating with a group, you can hang out here and play a game of “Yardzee” (Yahtzee with giant dice) or cornhole. But we continue now on the winding path, around quiet gathering spaces like benches near fountains, to the Mackinac Center for the Arts. You can catch free movies with island themes here, but also peek inside to see where the Moral Re-Armament staff would put on plays and film major motion pictures of the time. The set and sound stages were so sophisticated that Universal Studios would in the late ’70s opt to film “Somewhere in Time” here, even creating on set the room purported to be at Grand Hotel in which star Christopher Reeve traveled in time.

We learn more fun facts outside the Straits Lodge, a building that’s very long—but notably not longer than the porch of Grand Hotel. That’s because, Pat tells us, the architect was a friend of early Grand Hotel owner W.S. Woodfill and out of respect kept the building a foot shorter than the storied porch so the Grand could continue to claim the honor of longest porch in the world.

Still ahead is the best massage I’ve ever had at the resort’s Lakeside Spa and Salon and more exploring with Meeko. She loved to traverse the paths, greet carriage horses from afar and even joined Nick by plopping near him on the lobby carpet, similarly greeting anyone who entered.

We leave affirming all that Ware shares about her family’s mission of connecting guests to nature, the island and one another. “We’re getting calls every day for multi-generational weekends, girlfriend getaway weekends. And we do it all really well,” says Ware. “We have the great lawn and just the ability for everyone to chill. It’s really comfortable and relaxing.”

Read Next: 8 Things to Do on Mackinac Island This Summer