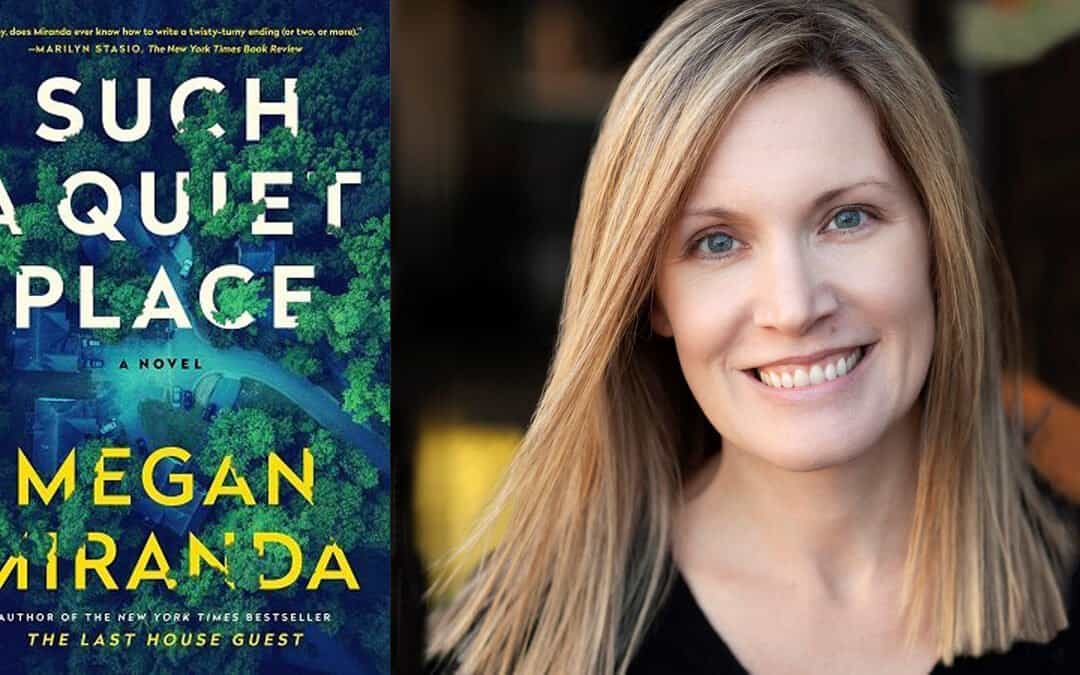 Author Megan Miranda joins the National Writers Series on Thursday, July 22 at 7 p.m. to discuss her newly-released novel, “Such a Quiet Place.” This free virtual event takes place via Zoom; pre-registration is required. Her book is available through Horizon Books with a 20% NWS discount; the guest host for this event will be fellow suspense author Riley Sager.

It’s not often that you get to sit down and pick the brains of not just one but two authors of best-selling suspense novels at once, but when you get that opportunity, it’s impossible not to turn that conversation into a Thriller Writing 101 class.

Megan Miranda is the New York Times bestselling author of a dozen books including “The Last House Guest,” a Reese Witherspoon Book Club pick. Her newest thriller, “Such a Quiet Place,” just came out last week, and focuses on the small lakeside community of Hollow’s Edge. What happens when former resident Ruby Fletcher returns home after being released from prison for the murder of two Hollow’s Edge residents?

At the same time, Riley Sager’s “Survive the Night” is currently on the Times best-sellers list. It’s set in the early ’90s as a college student shares a ride home with someone that may or may not have murdered her best friend a couple of months ago. Good times! There are no cell phones, no Wi-Fi, just payphones, rest stops … and near-constant tension.

These two authors clearly know a thing or two about creating twisty, turny plots, compelling characters and settings that scream with tension. So … how do they do that? We asked, and it makes for a nice preview of this week’s National Writers Series event.

NWS: A good place to start is at the finish: Do both of you know where you’re going to end up at the end of a book? Or do you like to let the story determine the pathway of the whodunit?

Megan Miranda: I never know. When I’m starting a project, I always start with character and premise, and I have to write my way into a story. I wish I could see a full story up front, but that’s just my process. So there’s a lot of revising along the way. And I feel like I can’t really know what decisions my character makes until I know them a lot better, and the only way I get to know them is by writing them. I let the character lead the way, write my way into the story, and then revise it a lot.

Riley Sager: I’m the complete opposite, but I’m slowly coming around to the way Megan does it. I used to be a major, major outliner and plotter, and it started to just mess me up because I would rigidly stick to this outline that I created six months ago, even though it was pulling me in the wrong direction. And I’d always have to revise everything. So I’m like, “Why do I do this anymore?” So I’ve started to write without an outline. But I do always have the endgame in mind. I always have, “Here’s the big twist. Here’s the big reveal. Here’s where all of this is going to lead … now let’s figure out how I’m going to get there.”

NWS: Megan, you mentioned that you started with characters first. When I was reading “Such a Quiet Place,” it struck me that I don’t think I’ve read a book in a long time where the heroine is really kind of … wishy-washy? How did you go about creating a character with that kind of flaw?

MM: I usually feel like I know their flaws beforehand. I feel like a lot of times the plot almost develops in opposition to what the character is working toward; what they were afraid of. When I started writing this book, the first character that came to my mind was actually Ruby, who is the really big personality who comes back to this neighborhood and shakes everything up. And I wanted it to be told from [the perspective of] her roommate, who really doesn’t know whether she’s innocent or guilty.

She’s also somebody who isn’t a very strong personality, she’s always been overshadowed by Ruby or [her] other relationships. So she’s in this unique position where she’s very close to the main character, isn’t sure if she’s innocent or guilty, and that is the present mystery: to uncover who is this person she’s living with? And it does go outside her comfort zone.

And that’s something I like to do with the characters: once you know their characters, you have to push them beyond their comfort zone, especially in a suspense or thriller. Push them through this really difficult situation. And so her character is not somebody who would be someone who’s taking the lead to figure out who the murderer is in a neighborhood … but she’s put in this position where she really has to.

RS: I love a good flawed character, whether reading one or writing one. And I know that sometimes it frustrates readers who want characters to behave in a way that they think that they themselves would behave, and life doesn’t work that way. I think our flaws are what make us interesting; I would be very bored writing a perfect person.

And a lot of times, the flaws are great ways to drive the suspense. Like in “Survive the Night,” the main character, Charlie, can be very frustrating. And she does some things that people just don’t understand, but it makes sense to her. So that was fun for me to write. And it was also fun to come up with ways to build suspense based on her sometimes very frustrating character traits.

MM: Just to jump on that, I feel like that’s what makes mysteries and thrillers and suspense so revealing of character. Because, you know, you can say from the outside, “Well, this is what I would do, and I wouldn’t make those decisions.” But these characters don’t have the luxury of that time. They have to make those split-second decisions. What do you actually do in that moment? It’s really interesting.

RS: None of us know how we would act in the presence of someone we think is a murderer.  So I do get a little frustrated sometimes when I hear from readers like, “Oh, I would have never done that.” Maybe so, but this character did. And that’s great.

NWS: What do you both do when you get to a point in a book and you feel … stuck? Because with a suspense novel, all of these pieces are built on one another, so is there anything that you do to shake yourself out of it? Do you have anything that you look to for inspiration?

RS: I often turn to a book that I’ve read before and loved. Or even just reading anything. Because I’ve found that great books will inspire you, and really terrible books will also inspire you. Because [you’re] like, “I’m better than this! I can do this!” That usually gets me out of the rut.

And also, just going back and reading what I’ve previously written already, it’s never as horrible as you think it is. Sometimes you’ve finished writing something and you’re like, “All of that’s got to go eventually, it’s all got to go.” And then, two or three weeks later, you look back on it and think: “This is not bad at all.” So, distance helps.

MM: I love those. I think, like you, it really helps to read back through everything. I find when I spend too much time away is when I feel like I lose a grip on all the different threads. I really have to be fully immersed in the world. So I do read back through everything and remind myself that nothing’s set in stone. I think a lot of times, a first draft for me isn’t necessarily the way it’s going to end up being the way I’m going to tell the story, but it helps me figure out what the heart of the story is.

Sometimes I get the structure the first time, sometimes I don’t. But I think you have to reach the end to see, “okay, this is the story.” And now, what’s the right way to tell it? I do get a lot of inspiration from other books and television shows and movies. Sometimes I do get stuck and I’m not sure if it’s the right direction. And sometimes I just give myself permission to just write dialogue, or just write action. And [I’ll] just get through that and see what happens next. If I’m kind of stuck on this, a lot of times that will help open up possibilities.

NWS: Ian Fleming has a whole essay on his rules for writing thrillers. He wrote that he had to “create a vacuum in my life which can only be satisfactorily filled by some form of creative work.” Well, he was lucky enough to have an estate in Jamaica, which not all of us can have … but do you have a place that you consider your hideaway now? And if you could have the proverbial estate in Jamaica, where do you think it would be?

RS: Well, this is my office [gestures]. When we bought this house, I knew that we needed a space that would be my writing space. And so this is where I spend most of my day: in this chair, at this coffee table, with this mug. And it’s good to have a dedicated working environment because I know that when I’m in this room, I should be doing something constructive. [And] my Jamaica would probably be a very nice lake house on the water [where] I could just sort of sit there and look out at the water and think and process what needs to be written.

NWS: I think one of those could be found somewhere in Northern Michigan … Megan, how about you?

MM: This is also my office where I spend many hours a day. Very same answer as Riley—I’m a creature of habit. So it really helps me to get in the headspace to come into my office and close the door and it’s time to work. And I am just thinking about that world when I’m in my office, then at the end of the day I try to leave that behind … when I’m not under deadline.

As far as where I would like to be … part of me says the ocean because that’s my happy place and seeing the water is always what makes me calm, but I get so much inspiration from the mountains and the woods. So I think I’m gonna have to be on the edge of the woods. I started writing “All The Missing Girls” sitting in a retreat in the North Carolina mountains right on the edge of the forest. I get inspiration from the woods and the forests, but I’m terrified at night, so if I’m there I get a lot of inspiration.

If you’ve been inspired to join these two authors in a live virtual conversation, you can sign up for free at the National Writers Series website.

Karl Klockars is the communications manager for the National Writers Series. This interview has been edited and condensed.