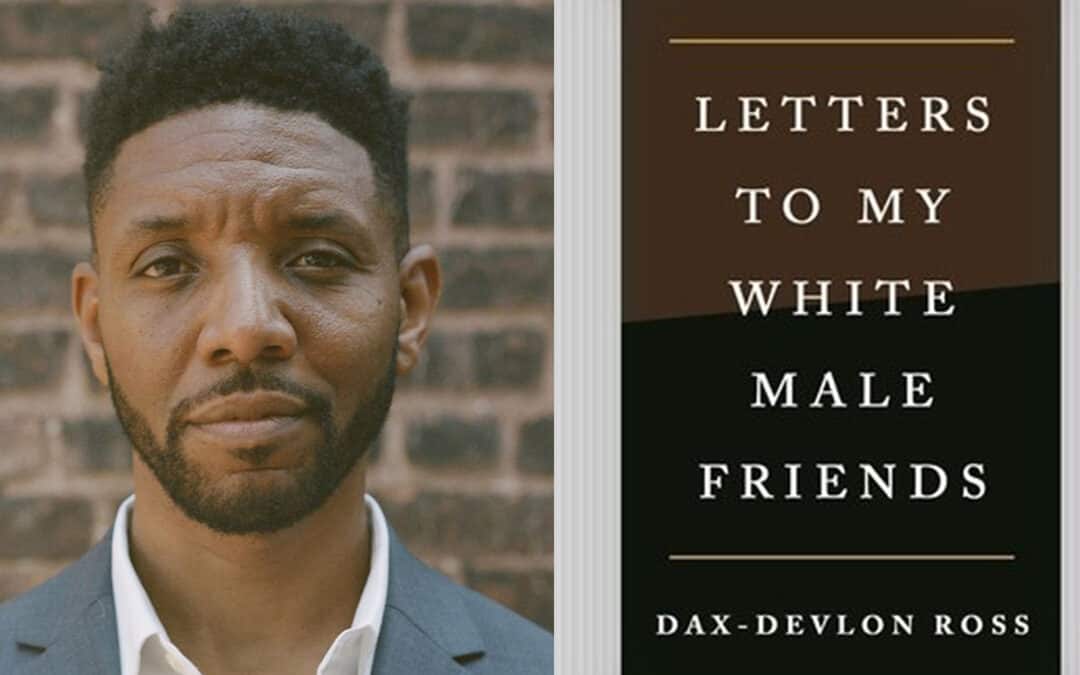 Educator, journalist and author Dax-Devlon Ross joins Traverse City’s National Writers Series this week to discuss his newest book, “Letters to my White Male Friends.” This free virtual event takes place via Zoom on Thursday, July 8 at 7 p.m. ET; pre-registration is required. His book is available at Horizon Books with a 20% NWS discount; the guest host for this event will be Courtney Wiggins from Northern Michigan E3: Educate, Elevate and Engage.

My conversation with author Dax-Devlon Ross began as so many discussions about race relations, systemic bias and discrimination do: With the 1986 movie “Short Circuit.”

Allow me to explain.

Director, producer and actor Fisher Stevens recently apologized for his role as an Indian scientist in the film, which involved “brownface” makeup and changing his accent to sound like an Indian man. When I saw that he also provided a brief review of Ross’ new book in the publicity materials (Stevens says the book “blew my preconceived notions [about race] and truly opened my eyes” and calls it “required reading”), I wanted to know: Did the power of Ross’s writing prompt this public apology about a role from nearly 40 years ago?

I also wanted to know because it tracks with the themes of Ross’s book, “Letters to my White Male Friends,” which uses a compelling mix of personal memoir paired with lessons on healing and finally, calls to action to make its case. It helps to open the reader’s eyes—in my case, the titular white male, but the book still applies to an audience beyond those demographics—to the idea that racism and bias were ever-present, even when we weren’t thinking about it. It was there even when we didn’t think what we were doing was in any way harmful.

Ross kindly accepted my slightly tongue-in-cheek question as a starting point for our conversation and took a broader view of the situation. “It was a time in our America where we were not engaged in a deep, reflective process around race, racism, racial commodification, racial exploitation,” he says. “This is an era where there was no analysis of systemic racism that people could really kind of latch on to to understand how racism continues to sort of permeate our society. This isn’t an apology for his behavior, but I just want us to have a more sobering conversation with one another about where we were as a society.”

That conversation plays out throughout “Letters to My White Male Friends,” as Ross uses his life experiences starting as a student in a majority-white private school in Washington D.C. as a mirror. Throughout the book, we see Ross’s life experiences where he encounters bias, conscious or unconscious, as well as places where he himself has failed in assumptions of privilege, culture or just making mistakes when it comes to race.

“I can’t just say, ‘come with me on my journey and let me point out to you all the structural flaws that I see’ without offering something that I think people can enter into and connect to themselves. So, it was intentional,” Ross explains. “People tend to want to paint either themselves or others with a really broad brush without allowing for the nuance of the actual lived experiences that we have in the world.”

The quiet wisdom of that is that it gives his “White Male Friends” something rare in a world attuned to every wrong word or gesture: it gives the reader the freedom to fail. To screw up along the way. To know that you’re going to make mistakes, that “doing the work” isn’t just reading a list of books and deciding you’re “healed” from the scourge of racism. It takes actions, and taking those actions is going to frighten you. And it also takes honest conversations with your friends.

In fact, every chapter opens as a letter would: with a direct address of “Friend.” In some ways, it’s a construct—by opening with “friend,” it sets the reader on a more intimate, conversational level with Ross. It is also a reality; another part of his lived experiences. “I’ve had Black folks come to me, like, ‘why are you taking the time to write to these white guys? There are other ways you could be spending your time and using your talents,’” Ross says.

“And my response is that this is actually my life. These are actually my friends. This is actually my story. I’m not speaking to some generic group of people out there in the world. If I were to organize 25 of my closest friends I’d say, 10, 11, 12 of them are white guys. These are people that I’ve been intimately close with since I was a kid.”

Ross brings that ability to openly converse with his actual white friends to the conceptual white friends reading the book, and I will admit to having at least two “aha!” (or more accurately, “holy shit”) moments in the course of reading this book. I won’t tell you what they were, though it doesn’t really matter: my “aha” moment probably wouldn’t be the same as yours. But was it helpful to have someone I thought of as a friend guiding me through this narrative? It sure was.

“What I hope people see in the story is that the only way that I can share some of the hardships and make some of the hard asks and hold accountability is through the lens of friendship,” Ross says. “We have enough stuff out there that is incendiary.”

The book also includes reflections on non-profit “Charity Culture,” it shares a construct for how to listen and learn from people that have different life experiences, and it demonstrates how to come to an understanding that the effects of racism cut both ways. It’s a real journey; one that is also actually a pretty quick read. (“This isn’t meant to be a huge tome,” Ross said. “This has to be something that people could really both dive in and move through.”)

In the end, I came away feeling a bit better about my ability to make a positive change in myself, to face my fears of saying or doing the wrong thing in an effort to be a better person, and in my ability to also help others moving forward. In being a better friend, in a lot of ways, which is really what this is all about: being close enough to someone to share some hard truths.

“Friendship means that I have known you for long enough, I’ve known you intimately enough, [that] you know if I’m offering you this feedback, it’s out of love, right? Out of concern, and not from a place of just to judge you,” Ross says.

“And if you can’t hear from me, then who can you hear it from?”

Karl Klockars is the communications manager for the National Writers Series.