7 Lavender Farms to Explore in Northern Michigan this Summer 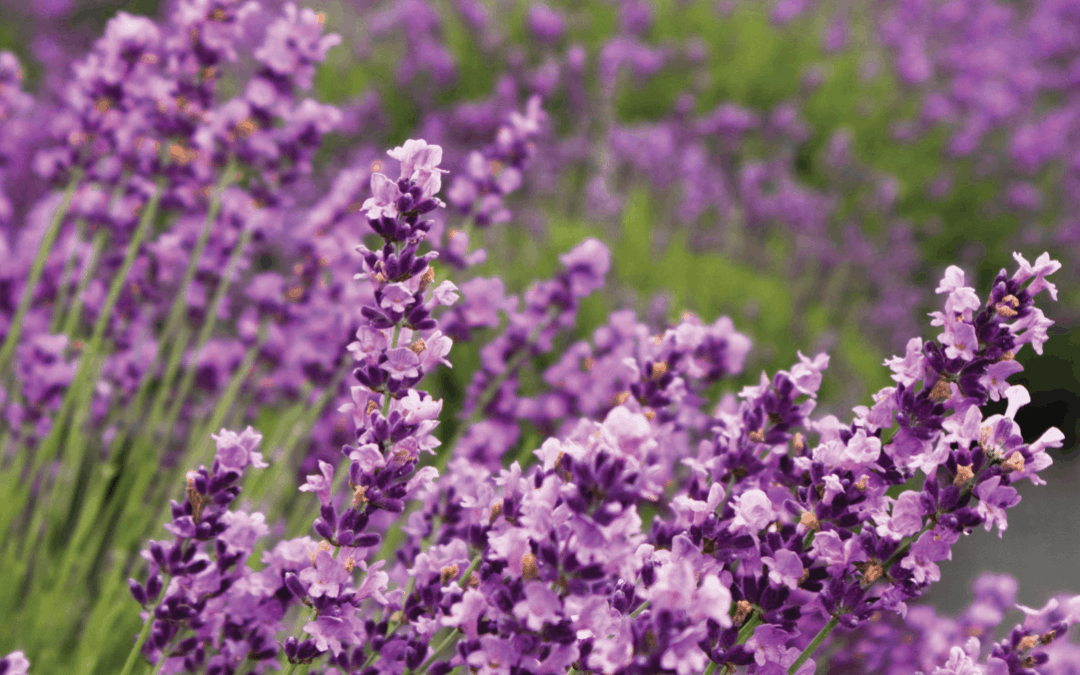 On a three-day trip through Northern Michigan, Sarah Bence was on a mission to discover the region’s best lavender farms. She shows us seven stunning stops.

Fields of undulating purple stretch before me. The longer I look, the more I see: crisp white flowers dance among darker indigo shades. There’s a constant humming of bees. Drunk and docile on lavender nectar, they lazily bump into one another. A red barn dappled in sunlight. The shimmer of Lake Michigan, peeping into view beyond rolling hills. All around, the scent is earthy but delicate, soothing but, in a way, startling. Because this isn’t a postcard or a perfume bottle. It’s reality right here in Michigan.

When I planned my route, I hoped for this sensory overload. I wanted dirt roads, lush green grass and endless rows of lavender. I spent three days driving through Northern Michigan with a mission: Discover the region’s best lavender farms. What I really found was a connection with fellow Michiganders, all from totally different backgrounds, who share a love for this special plant: a young mother who taught herself to farm lavender; Texas transplants turned agritourism B&B owners and two finance professionals who looked at an old barn and saw a way to in- vest in their community.

On the first day of my road trip, I took M-22 north, passing through three of the seven farms I planned to visit and ending at Park Place Hotel in Traverse City. I decided to base myself in TC for the next two days, as it’s a central location between all of the farms. Staying downtown also meant that in the evenings I was within walking distance to restaurants, boutiques and the beach. My first stop was Northern Lavender, a five-and-a-half-acre farm in Mesick. It’s owned by Andrea McCaherty and her husband, Josh. Andrea’s bubbly personality shined through over email before my arrival: “I’m responding to you from the middle of my lavender field, where I’m letting the alpacas free range between rows while my kids play barefoot in the sand. It’s a good day.” I wanted that kind of day, too.

After I parked in the gravel lot, Andrea came out to meet me, accompanied by her nine rescued alpacas, and the 22 chickens who provide insect control (or in Andrea’s words, act as the alpacas’ “bodyguards”).

Northern Lavender is the newest of the farms I visited, just planted in 2017. It takes about five years for lavender to peak, but even in its youth, it’s beautiful. Wan- dering the fields, I was surrounded by for- est, grazing alpacas and honeybees.

I didn’t pick lavender at this farm be- cause on the day I visited, it had already been heavily picked from an unexpectedly popular U-Pick event the weekend before. Andrea mused that the months of social distancing and staying at home probably inspired its popularity. The young lavender was patchy, and so I decided not to take any for myself.

Andrea and Josh have big plans for Northern Lavender. They’re on track to be the first USDA-certified organic lavender farm in Michigan, and the 18th in the country. There are also plans for beehives, weddings and other events (like helicopter tours). 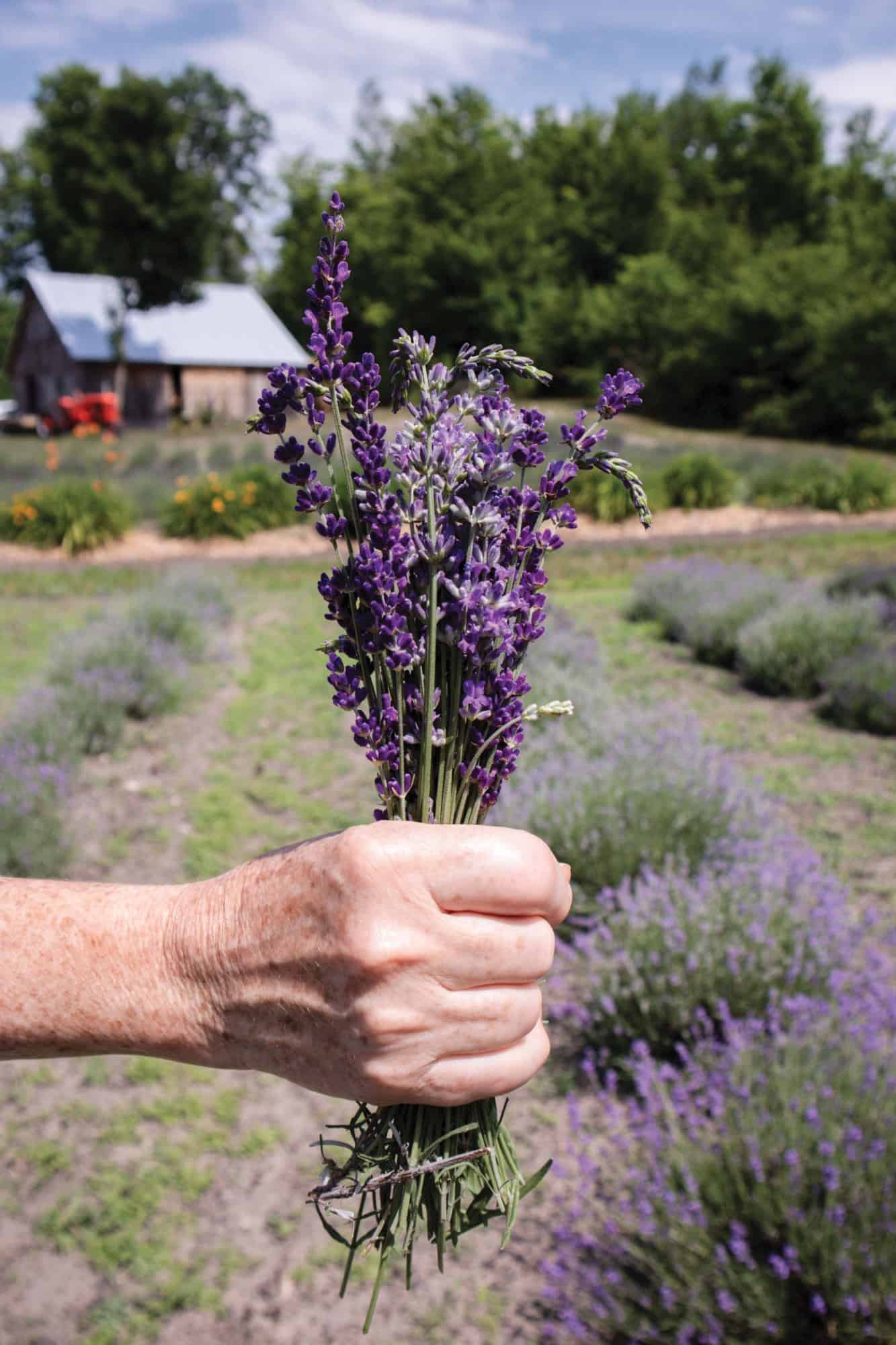 Next up was Bohemian Lavender, a short drive off M-22 after snaking along the Lake Michigan coastline. I crested a hill in the long dirt driveway and was met with a view like that of a painting: rows of newly-bloomed lavender leading to a weathered barn, fronted by a bright red tractor.

When Mike and Mary Shimek retired from their teaching jobs, they decided to transform the family farm. Bohemian Lavender was originally a maple woods until the couple cleared it six years ago and planted their first lavender. In 2019, they also cleared the family’s 120-year-old cherry orchard to plant an additional five acres of lavender, and they’re hoping to add a lavender labyrinth in the near future. Today, Bohemian Lavender is home to 1,000 lavender plants in seven varieties.

After chatting in the barn-turned-gift-shop (where soy candles, culinary lavender and Mike’s own metal fish sculptures are for sale), Mike sent me off with a pair of scissors and a rubber band. I walked the aisles between rows of Hidcote, Munstead and Phenomenal lavender varieties, cutting my own bundle.

After hanging my bundle of lavender from the rearview mirror, I reconnected with M-22 and drove to the day’s final stop. Terrazza di Lavanda (nicknamed TerLa) is actually a B&B, located on a secluded 20-plus-acre property on the Leelanau Peninsula. It’s less of a “farm” per se, and more an agricultural immersion, featuring an Italianate garden of lavender overlooking Lake Leelanau (and on a clear day, a view out to Lake Michigan and Pyramid Point).

I parked in the dirt lot and called Roger Rodiek (who owns TerLa with his wife, Elaine, who moved from Texas to Michigan to operate TerLa). Unlike the day’s previous farms, TerLa is more private. It’s only open by appointment, or for special events like sunset viewings, yoga or intimate concerts.

The garden itself is west-facing, which means 10–15 hours of summer sunlight, but hard winters (made harder by the “lake refrigerators”—Roger’s words—on both sides of the peninsula). There are 10 varieties of lavender, about 15 percent of which die off each winter, which means the work here is never done. The positioning also means this is, quite possibly, the best place to catch a sunset in Northern Michigan, surrounded by fragrant lavender as the sun dips below Lake Michigan.

Day two began by waking up at Park Place Hotel in downtown Traverse City. I then picked up a lavender-infused ‘Sleeping Bear’ latte from Third Coast Bakery en-route to the day’s first stop: Lavender on Old Mission Peninsula.

This farm is tucked away on a dirt road on Old Mission and isn’t open to the public unless during an organized event. I contacted the farm’s owner, Amy Parker, for permission before my visit. Amy warned me that nobody would be there. She said the three-acre farm might look “bland,” and that their strength really lies in their lavender products–think essential oils, bath salts and fizzes, and small-batch soaps.

Well, pulling up to the field of 3,000 swaying purple lavender plants, which bloom in full force since they were planted back in 2014, I had to disagree with Amy. It was stunning. Of all the farms I visited, this definitely had the most untamed feeling. It was flanked by cherry orchards, a vineyard, and wild grapes along the roadside. I didn’t meet another soul during my visit unless you count the orchestra of bees.

There are plans to expand the farm. Retail space is being built, and Amy hopes to add other botanicals and edibles. Events, like a Veteran’s Day U-Pick, allow the public to enjoy the beauty of Lavender on Old Mission Peninsula. 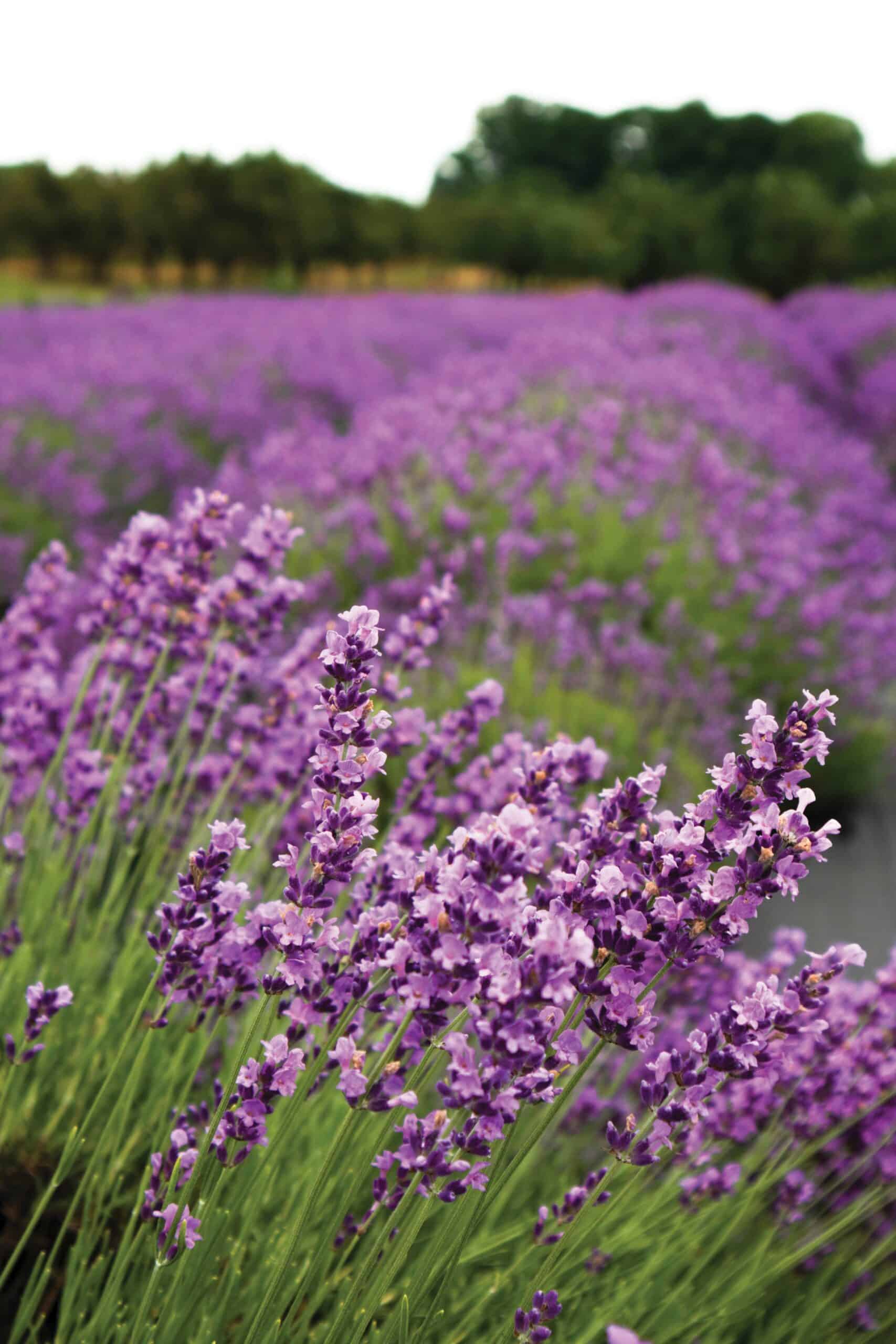 After pulling myself away from Lavender on Old Mission Peninsula, I drove farther up Center Road, which bisects the peninsula. Next on the agenda was Brys Estate, a popular vineyard and winery. Less known is the 12-acre secret garden that sits in a low valley beyond the grapevines.

Katie Brys, creative director at the Secret Garden, met me in the lavender, wear- ing a bright smile, a flowing dress and offering a package of homemade lavender shortbread. Katie told me that nine years ago, her parents, who own Brys Estate Vineyard & Winery, used to spend their evenings in this little valley with a glass of wine, where the cold air sat and prevented grape growth. In 2011, the mother-daughter duo decided to repurpose the valley by planting lavender.

Now, the plants thrive here. Almost all the lavender is Angustifolia, imported from Oregon and Washington. It grows alongside herbs like sage, lemon balm and peppermint, all of which go into the extensive product line. According to Katie, the goal was to “create a place for people to experience peace, to take a minute to soak it all in.” 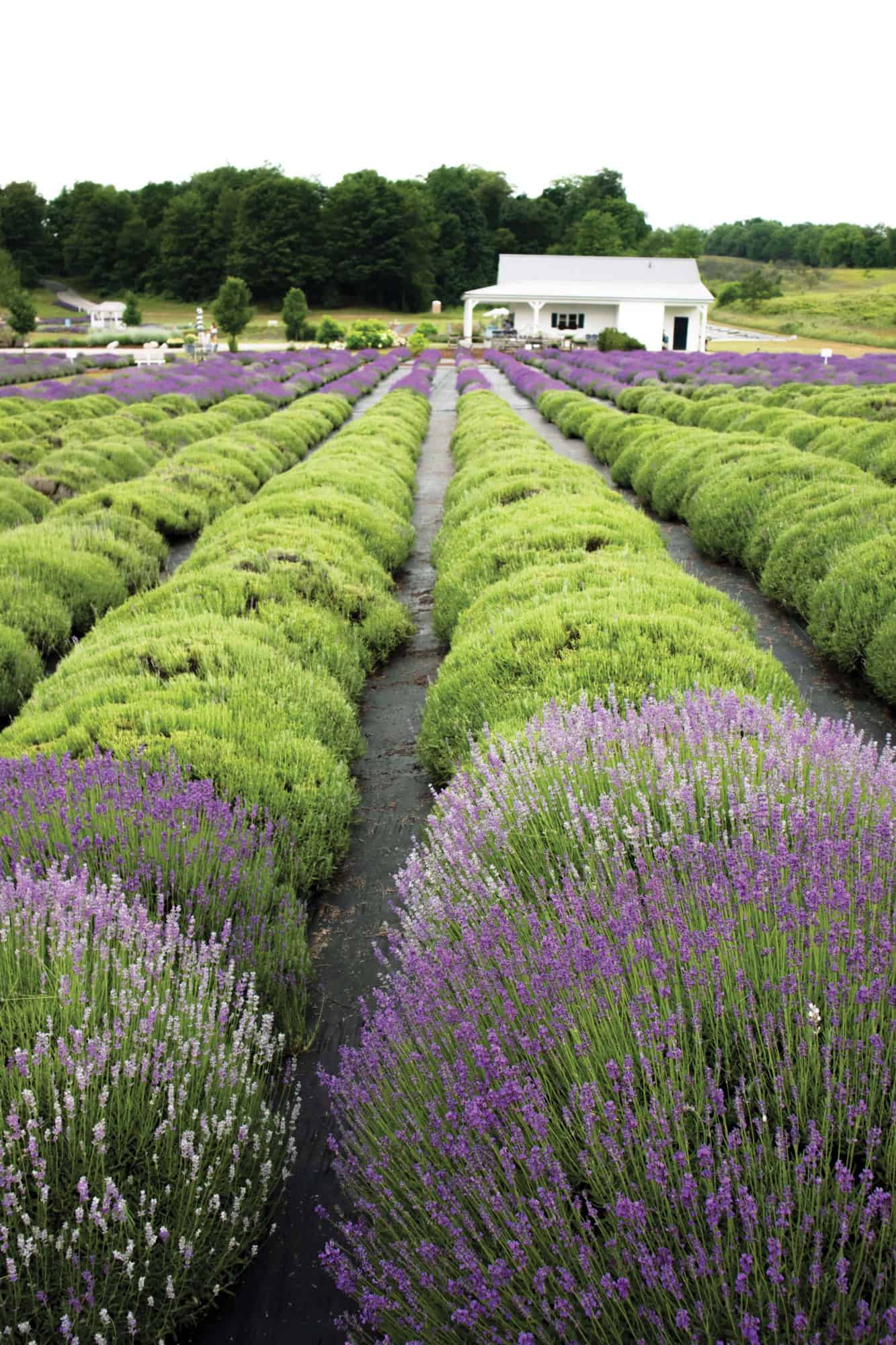 My final stop of the day, even farther up Old Mission Peninsula, was Harbor View—a rustic yet enterprising establishment.

In 2010, owners Sonja and Bret Richards introduced lavender to their property, which has been a plant nursery since 1993. Harbor View now has nearly five acres of lavender. These fields were unique to other farms I visited due to the smaller aisles between each row. The result was a visually arresting wave of densely packed flowers in various shades of purple.

All of this lavender is harvested by hand—and my visit, which occurred a little later in this particular farm’s bloom window, coincided with the cutting. Walking through the barn, I was surrounded by hundreds of drying bundles of lavender and the encompassing floral fragrance.

Harbor View also operates a small roadside stall, which seems to magically expand once you enter. The walls are lined with more than 50 products, all made from the farm’s lavender (as well as homegrown cherries). I couldn’t help but leave with a few lavender sachets, a lavender-infused blueberry jam and some cherry salsa. 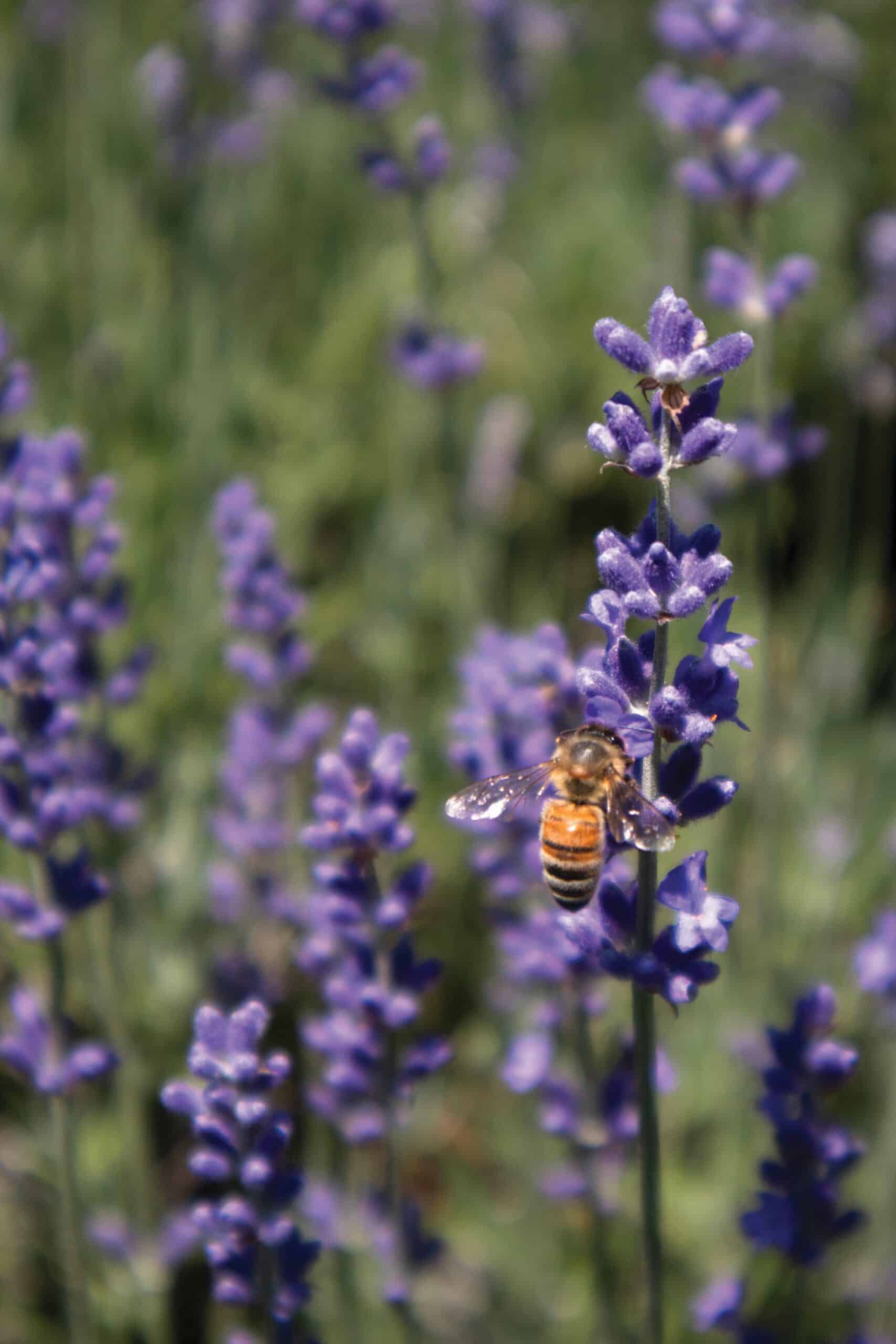 The third and final day of my road trip was reserved for just one destination: Lavender Hill Farm. At 33 acres and 13,500 plants, I knew it would take the full day to explore. From my hotel in Traverse City, it took about an hour to reach the farm, passing through Charlevoix’s drawbridge traffic along the way.

I nabbed the last parking spot, thanks to visiting on a sunny July weekend, before meeting up with Rita Robbins and Bill and Erin Mansfield, the joint owners. Rita and Bill worked together in finance before seeing a small lavender farm for sale in 2015. They bought it on a whim—with zero farming experience. Six years later, it’s a wildly successful operation with around 35 employees that has invigorated the local community’s economy.

Bill escorted me on a golf cart tour of the farm (which is offered for $5). As we bumped along the trail, I caught whiffs of each variety of lavender, which are all labeled plot by plot.

Lavender Hill Farm grows 26 varieties of lavender and utilizes each one in products sold in a refurbished 100-year- old barn. Other products are outsourced to local artisans. “Two hills away we have our cookie maker, and 15 hills away is our syrup guy,” Bill explained in the way only a member of the Northern Michigan community could. The essential oils, however, are made on-site in their own still.

Visitors can also wander the farm or enjoy one of the many events—like Monday movie nights in the barn, distillation and mixology classes, yoga classes in the fields and so much more. 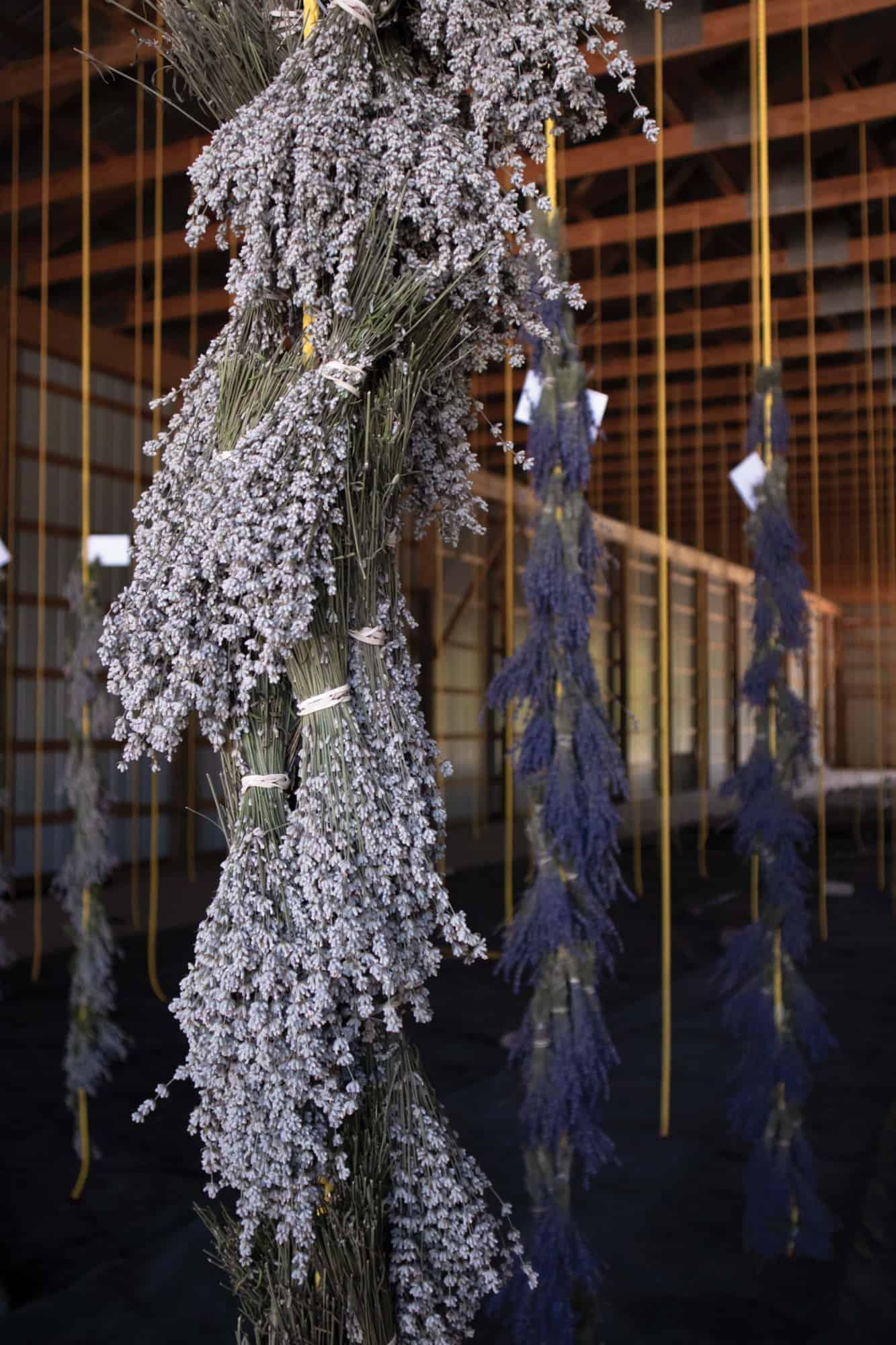 Many people, even Michiganders, aren’t aware of how well lavender grows here. Lavender prefers dry, sandy and stony soils like ours (similar to its native Mediterranean lands). And while it thrives in the direct summer sun, it’s also hardy, which is useful during Michigan winters.

Northern Michigan in particular, with its location on the 45th parallel (the same as southern France), offers an ideal climate for lavender. This is for much the same reason that vineyards thrive here.

I had to time my road trip right because this stunning scenery only lasts a few weeks each year. Lavender season can span from June through August, with each year varying a little. A bit like the fall color season, there are even pronounced differences in bloom times between farms just miles away from each other, as I witnessed on my trip. I corresponded beforehand with the farms’ owners for updates on the year’s bloom window, which helped me time my trip correctly.