Inside a Mullett Lake Cottage with Lone Ranger Ties 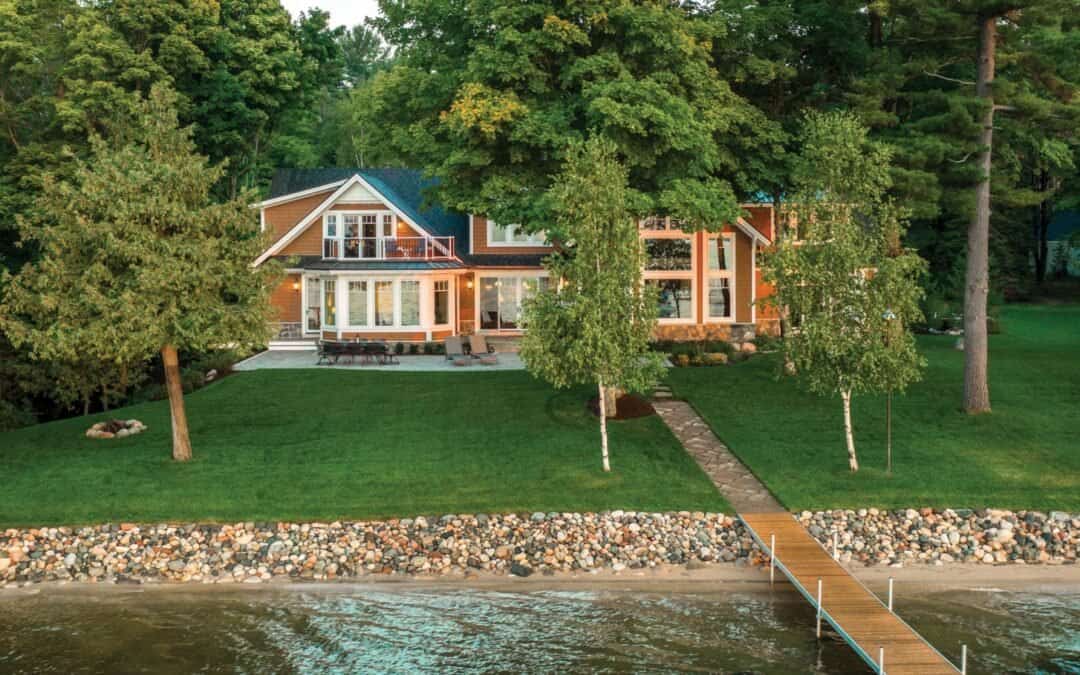 The spirit of the masked man lives on in this elegantly rustic Cheboygan County cottage designed by Edgewater Design Group.

If you are too young to remember the Lone Ranger, here is a lesson from an oldster: Sometimes known as The Masked Man, he was the lead character in a radio (and later television) program that launched on Detroit station WXYZ in 1933. As the plot goes, John Reid, a Texas Ranger, was the lone survivor of an ambush by outlaws. He was befriended by a Native American man by the name of Tonto. Each episode of the series had the Lone Ranger (whom Tonto called Kee-Mo- Sah-Bee, a loose translation being Trusty Scout) and Tonto bringing justice to the Wild West. The Lone Ranger always wore a mask, rode a horse named Silver and shot silver bullets. He never smoked, drank, cussed or shot to kill.

Cue the “William Tell Overture” (the show’s theme music) and a hearty “Hi-Yo, Silver, away!” (the Lone Ranger’s cry as he galloped off on Silver)—this plot has a Northern Michigan twist. From 1911 to 1941, Chief (Charles) Yeager, who was part Native American, and his wife, known as Gram Yeager, ran a boys camp on the shore of Mullett Lake near Cheboygan. The camp was initially called Kee-Mo-Sah-Bee and later renamed Lone Ranger Camp with a masked man logo. Tonto, a man in Native American garb and authentic headdress, was a regular visitor to camp bonfires. The boys, most of whom came from Chicago and Detroit on a train that dropped them literally at the camp gate, were taught upstanding character values. One of the campers was James Jewell, who grew up to be Chief and Gram Yeager’s son-in-law—and also the first drama director for the Lone Ranger radio show. No doubt, Jewell imported the term Kee-Mo-Sah- Bee and many of the camp’s concepts and lore to the new show. 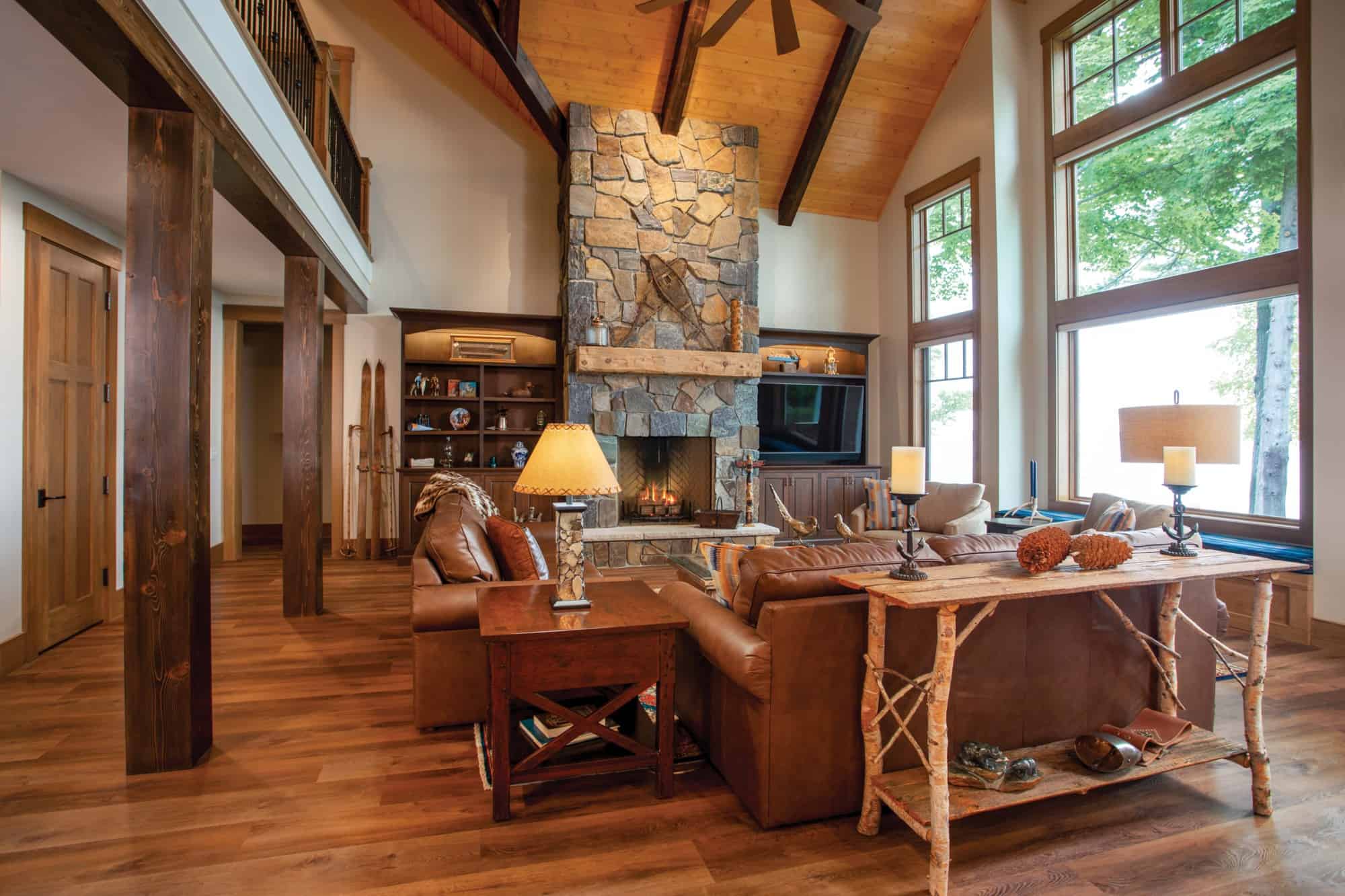 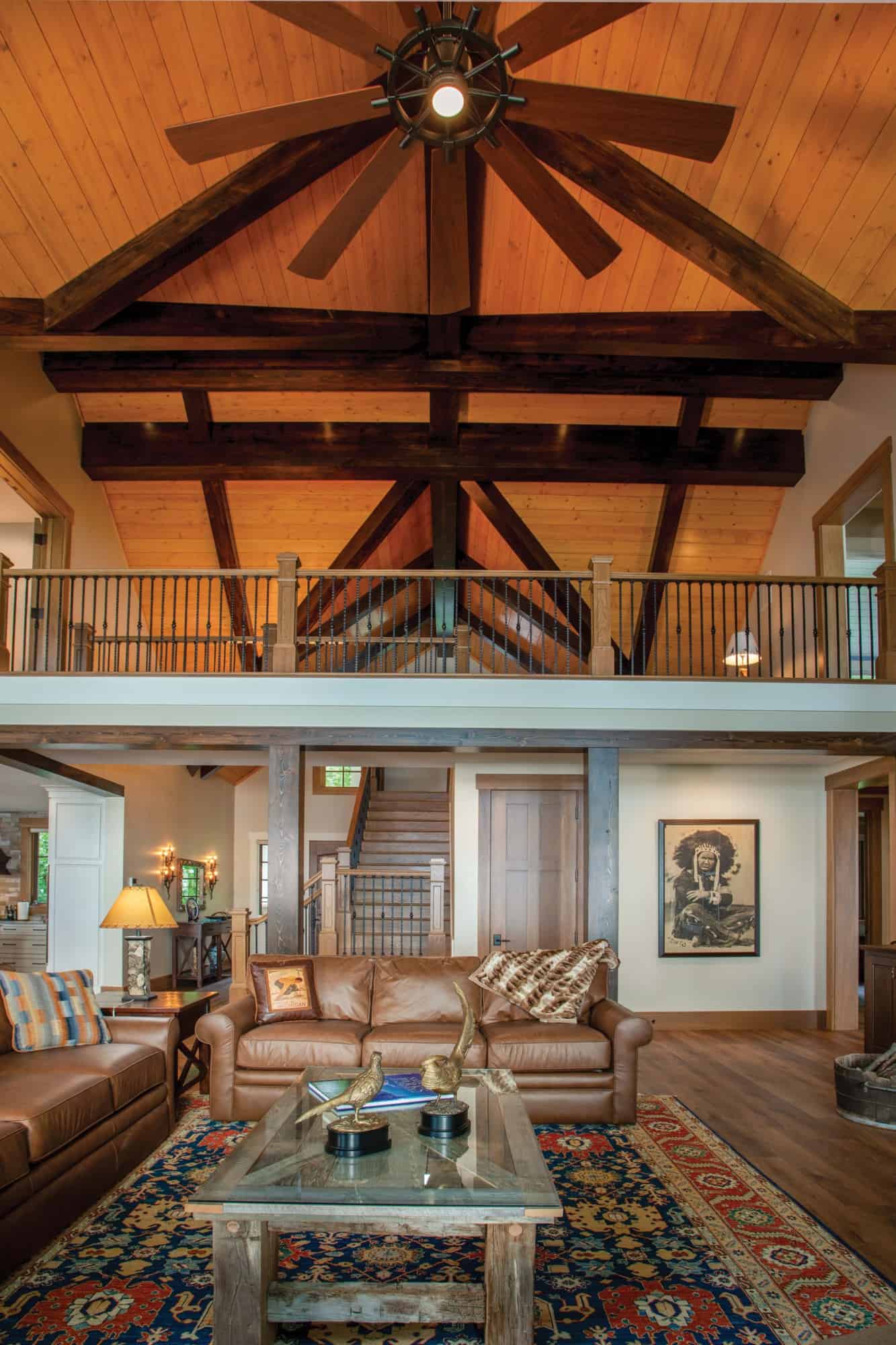 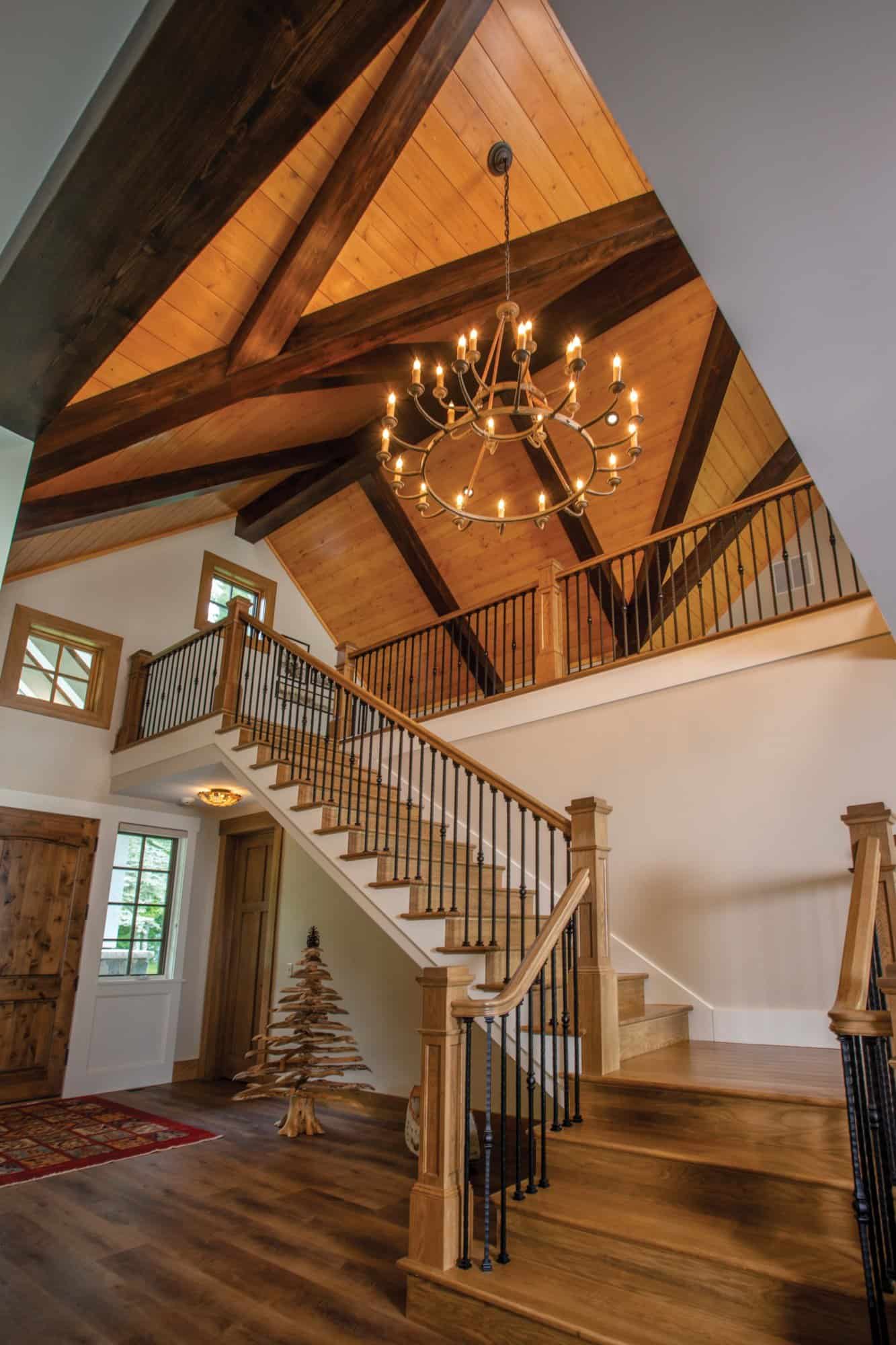 In 1949, Ernie and Vi Walter purchased from the Yeagers 185 feet of Mullett Lake shoreline that had once been a part of the camp and built a large cottage so there would be plenty of room for their own family, plus extended family and friends. Over the course of many summers, the Walter family became close friends with Chief and Gram Yeager. When the Yeagers died, the Walters purchased the remaining 100 feet of the camp property. The Walter family continued summering in the former cottage that Ernie Walter built, which they affectionately referred to as “Ernie’s Hobby,” even after Ernie and Vi passed on. Eventually, the cottage fell to the Walters’ daughters, Jackie Keller and her husband, Paul, and Kathy Smith and her husband, Gates. The two couples made a list of all the upgrades that were needed for the nearly 70-year-old cottage and decided that the time had come to take down the original cottage and build a new one.

On their wish list was a high-quality, low-maintenance home large enough to house all the family members and friends that visit over the summer. The new home also had to honor the spirit of Ernie and Vi, as well as, as it turned out, Kathy, who passed away during the initial planning stages. And, of course, it was only fitting that the home include memories of Lone Ranger Camp.

But who to build it? By all accounts, Paul Keller is a perfectionist who doesn’t make a decision until he has researched all the possibilities to find the best option. On his morning runs along the old railroad track that once brought boys to the camp, Paul often passed a newly built home that he admired. One day he stopped and asked a friend who built it. The friend told him it was Brett Bandi of Bandi Builders. The Kellers and Smiths made sure that Bandi was one of several builders they interviewed for the project, and they were im- pressed with him from the start. “We really hit it off when we met with him,” Jackie says.

Bandi felt similarly. “They are really nice family people,” he says. “I met their family on various visits and I could tell that family was a major driver for them and that this was going to be a family heirloom cottage and legacy for their kids and grandkids.”

The Kellers and Smiths also interviewed several architects, including Stephanie Baldwin of Edgewater Design Group, who had been the architect on the Bandi home that Paul first saw. The Keller/Smith family left the meeting with Baldwin convinced that she was the designer to translate their dream into a blueprint. Indeed, the cottage that Baldwin designed for them feels as though it has sat on Mullett Lake since the Camp Kee-Mo-Sah-Bee days. The exterior, clad in stone and lovely cedar-colored shake, is also adorned with a number of traditional cottage details, including rafter tails, embellished gables, white moldings and even a cupola. All that vintage style, however, belies modern, low-maintenance materials including polymer shake and trim, with limestone and granite. 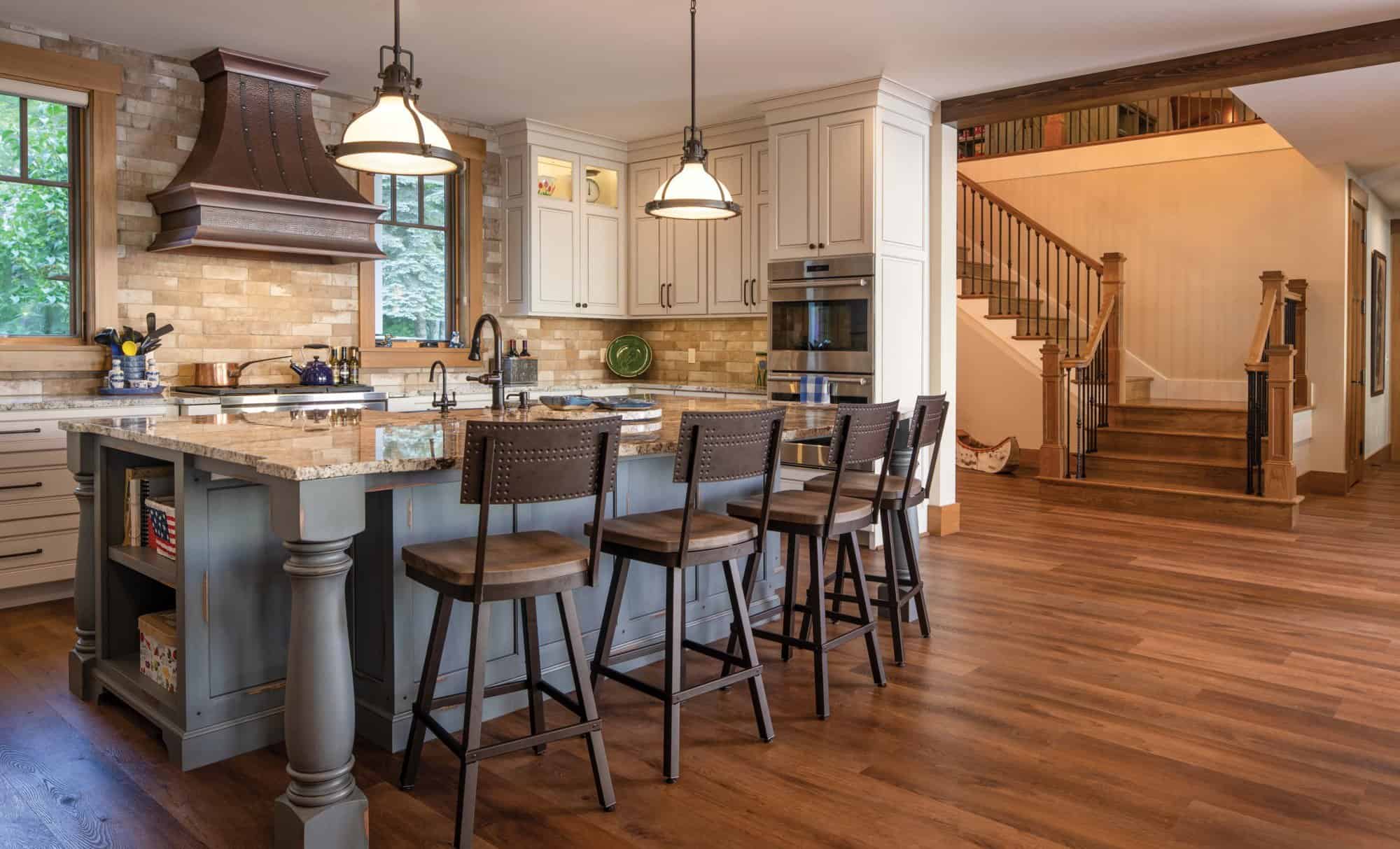 Inside, Baldwin managed to tuck in six bedrooms (including two master suites), an office with a Murphy bed and six full bathrooms. A bonus sleeping area over the garage offers even more room for guests. “Each room is a little different—everyone got to choose the finishes they wanted, so some of the rooms have barn wood, some pine, some beams, and there is a mix of paint color,” Baldwin explains. An upstairs living area accommodates the family’s younger generation. She also designed an airy sunroom of glass that brings the outdoors in.

To enhance the home’s nostalgic feel, Bandi project manager Alex Navidzadeh and the family salvaged elements from the old cottage and repurposed them. They incorporated some of the old cottage’s oak paneling into a barn-style door and made an end table out of the original kitchen countertop. To add a whimsical touch, they embedded Pewabic tiles and stones into some of the showers. They also salvaged the decaying stone pillars that once marked the entrance to Camp Lone Ranger.

The heart of the home is the first-floor great room with its vaulted ceiling, cedar beams, upper-level bridge and stone fireplace that reaches to the ceiling. A floor-to-ceiling bank of windows makes the most important view, that of Mullett Lake, front and center. Meanwhile, across the room, hung on a prominent wall, is a blown-up, very old photo of the man who played Tonto at Camp Kee-Mo-Sah-Bee— his placid gaze reminding all who stay at the home to be trusty scouts. 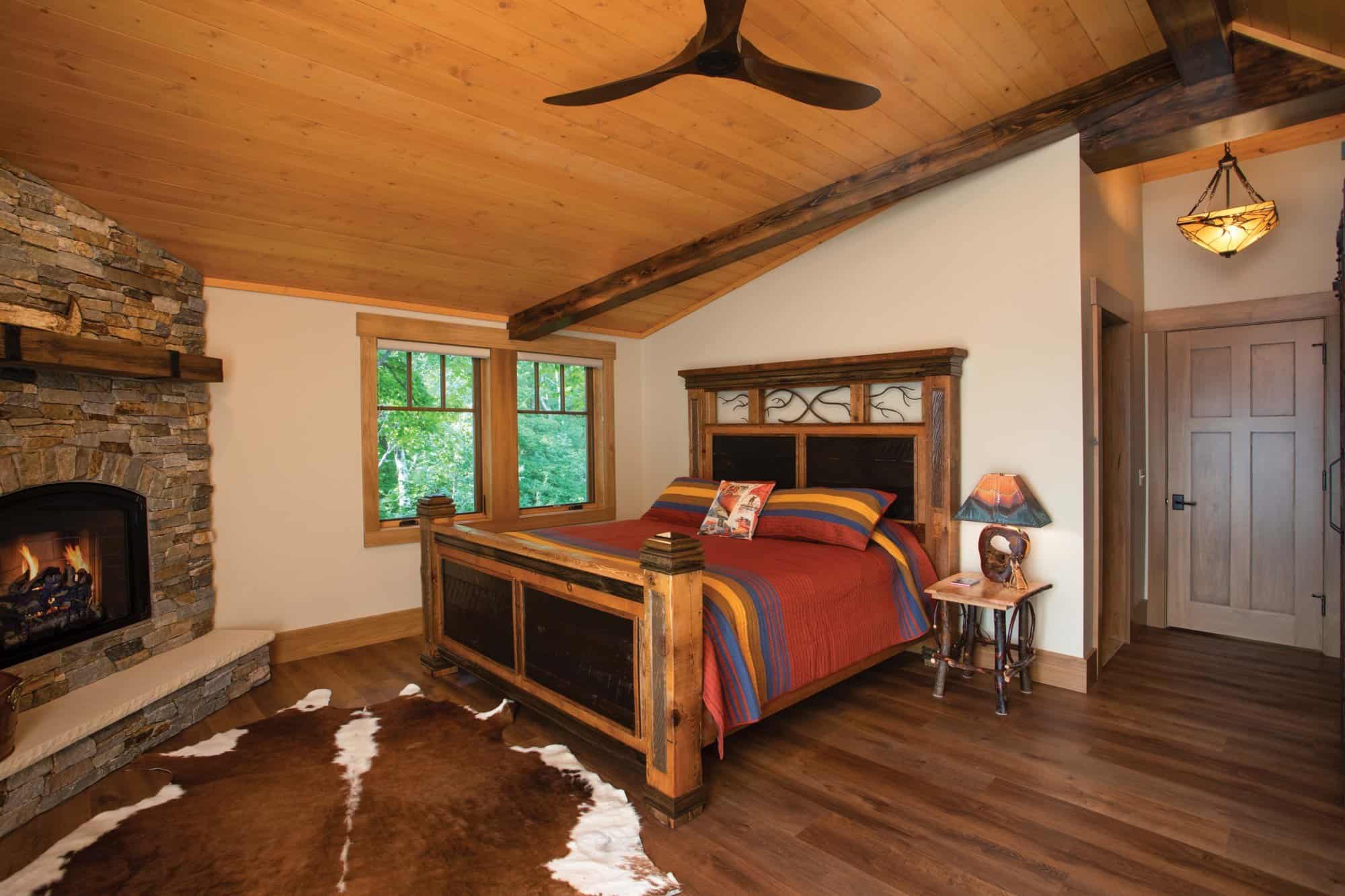