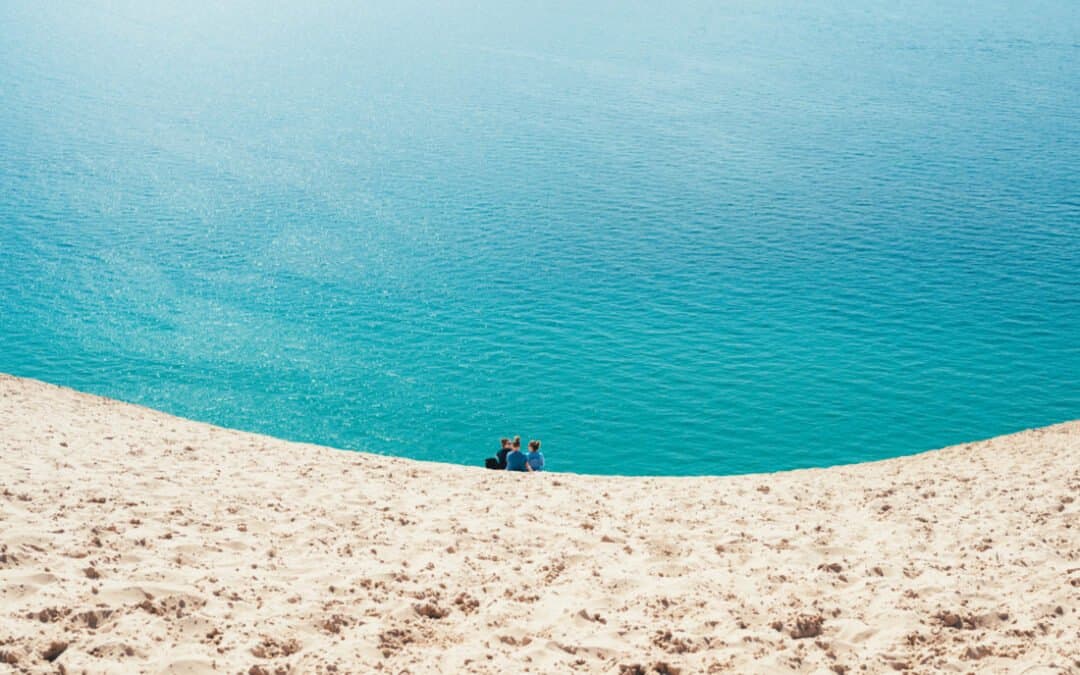 On the hilly 7.4-mile Pierce Stocking Scenic Drive in Sleeping Bear Dunes National Lakeshore, you can imagine the might of the glaciers that sculpted the area 10,000 years ago. The views are spectacular—especially overlook 9. Pack a picnic and your camera, and be prepared to say “Wow.”

Most folks associate Sleeping Bear Dunes National Lakeshore with the fun mountain of sand known as the Dune Climb. While no one should miss that park attraction, the Pierce Stocking Scenic Drive unlocks the natural wonders of this precious landscape.

Before heading to Pierce Stocking Scenic Drive, it’s worth stopping at Sleeping Bear Dunes National Lakeshore’s visitor center (corner of M-72 and M-22 in Empire) for maps, guidebooks and a park pass—though you can also purchase a pass at the gate.

There are 12 stops along the scenic drive. Here’s a peek at what you’ll see.

At the start of the drive, pull off to take a photo of this sweet structure. Fun fact: Porcupines ate the original walls—apparently the trees in the forest weren’t tasty enough. The current bridge has a higher roof with 13-feet 6-inches of clearance.

This stop offers a bird’s-eye view of the glittering Glen Lakes, products of glaciers that formed in the Ice Age. From here, you can see across Little Glen to where it joins Big Glen under the M-22 bridge known as The Narrows. Off to the north, find the tree-filled ridge that meanders down in the shape of an alligator snout—hence its name Alligator Hill.

Yep, this is the perfect place to spread a blanket and open that food basket. Hop back into your car after viewing the Glens for a short drive to the “mountain.” 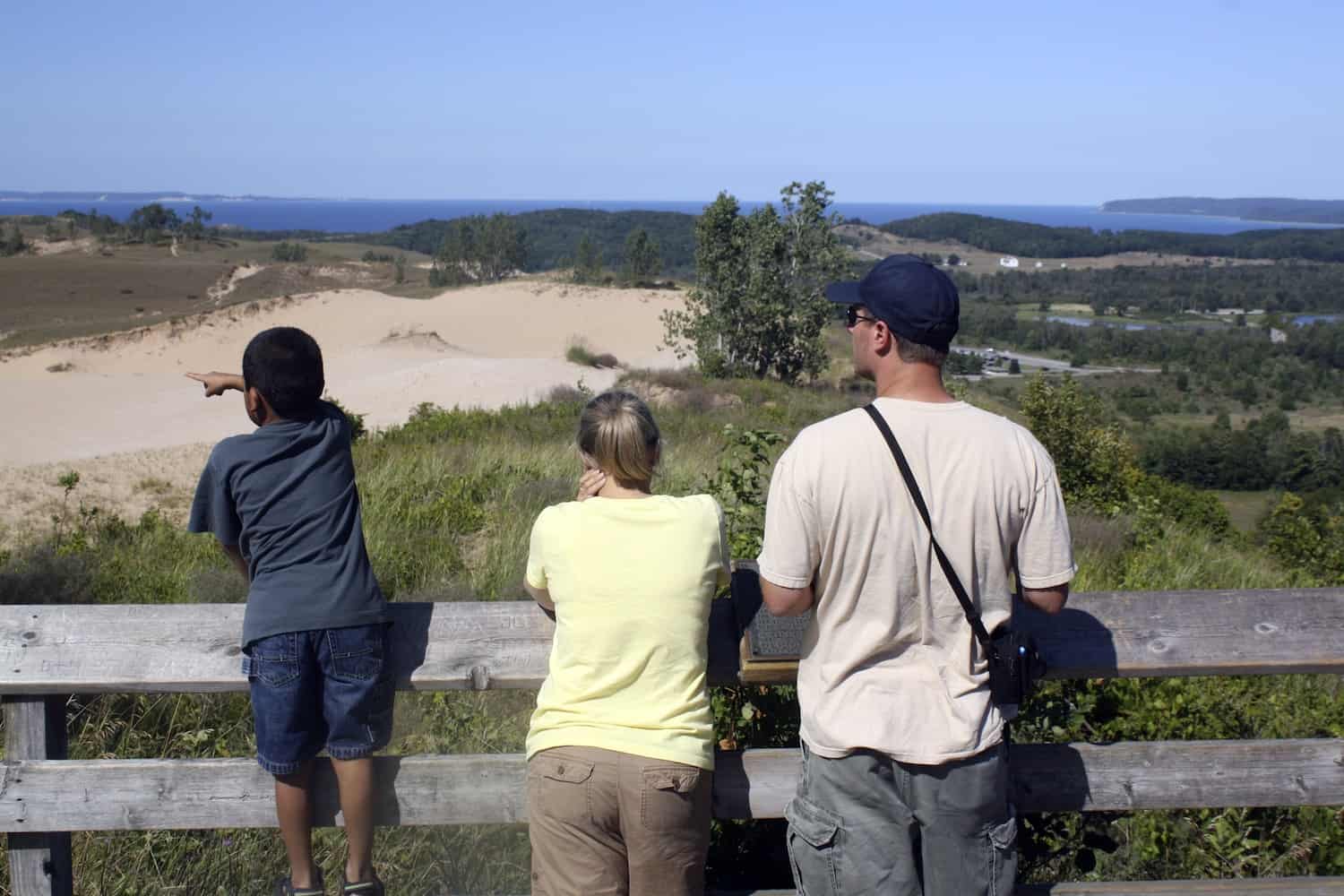 There is so much to take in at this one stop you’ll have to remember to exhale. From this point, you can pick out North and South Manitou Islands across Lake Michigan’s Sleeping Bear Bay, Pyramid Point (so named by sailors for its shape), the dunes and the Glen Lakes. Those white barns you see in the distance are part of the privately-owned, historic D.H. Day Farm—named for the lumberman who built it in the beginning of the last century.

Here’s your chance to stretch your legs and get up close and personal with the dunes. This 1.5-mile hike moves you up and down dunes, across blowouts, past patches of bearberry and buffaloberry and cottonwood trees half-buried in sand. Sand makes a marvelous canvas for animal tracks, so keep your eyes peeled. Note, the trail is strenuous in several spots. 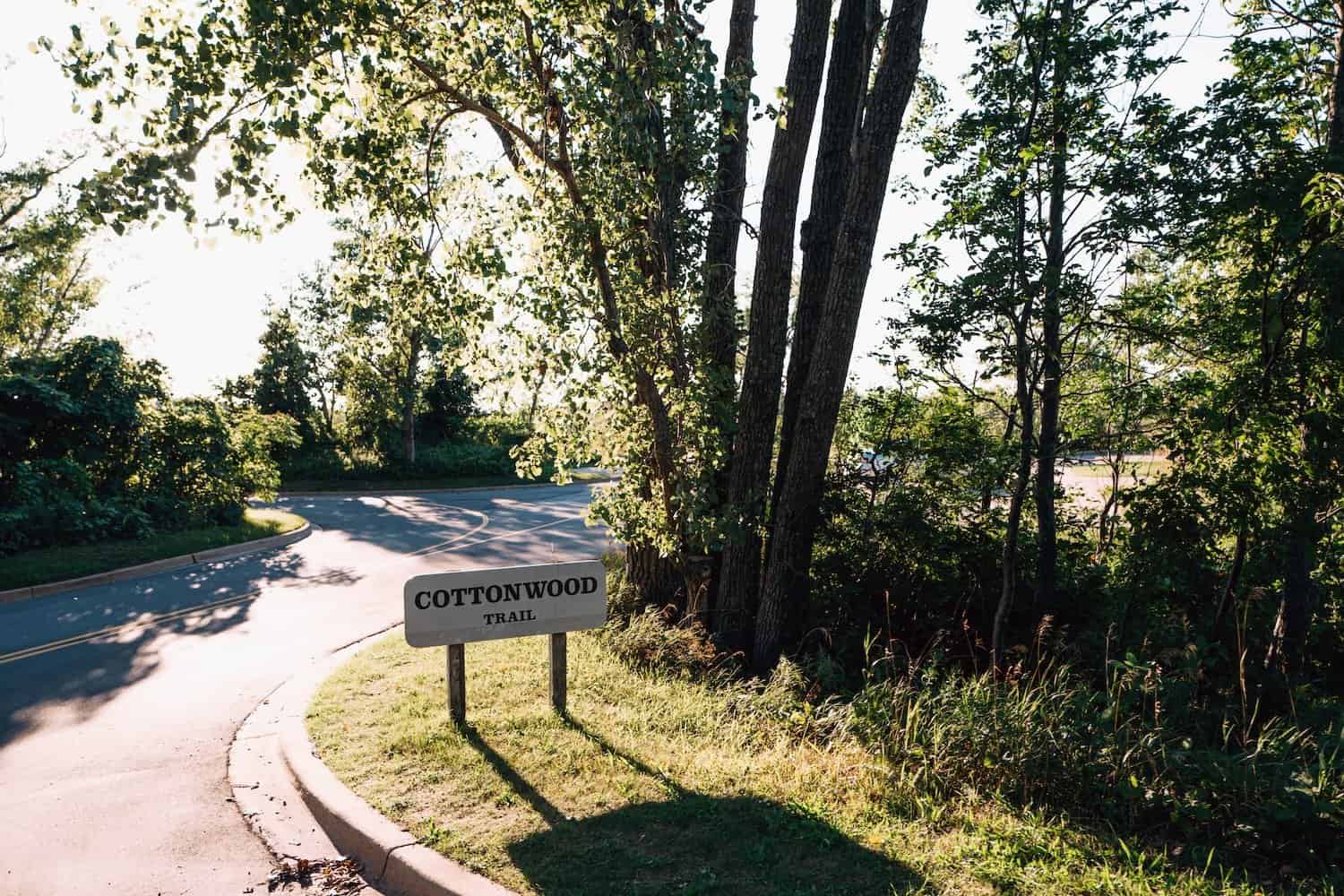 This is where you’ll learn how in the world plants like the cottonwood tree and juniper bush can survive on the sand dunes.

You’re about to enter the beech-maple forest that borders the dunes. Dunes are built by strong winds. Further inland, the wind loses its energy and can no longer create them.

Learn how the landscape has changed since the last glaciers in the area melted about 11,800 years ago.

This is the piece de resistance of all Northern Michigan attractions. Walk out onto the viewing platform 450 feet above Lake Michigan and catch your breath at the sight of glittering water that stretches below you. South—to your left—are the Empire Bluffs, which are the gateway to Platte Bay. Further down the coast is Point Betsie. The Manitou Islands are on the horizon and Sleeping Bear Point is to the north. 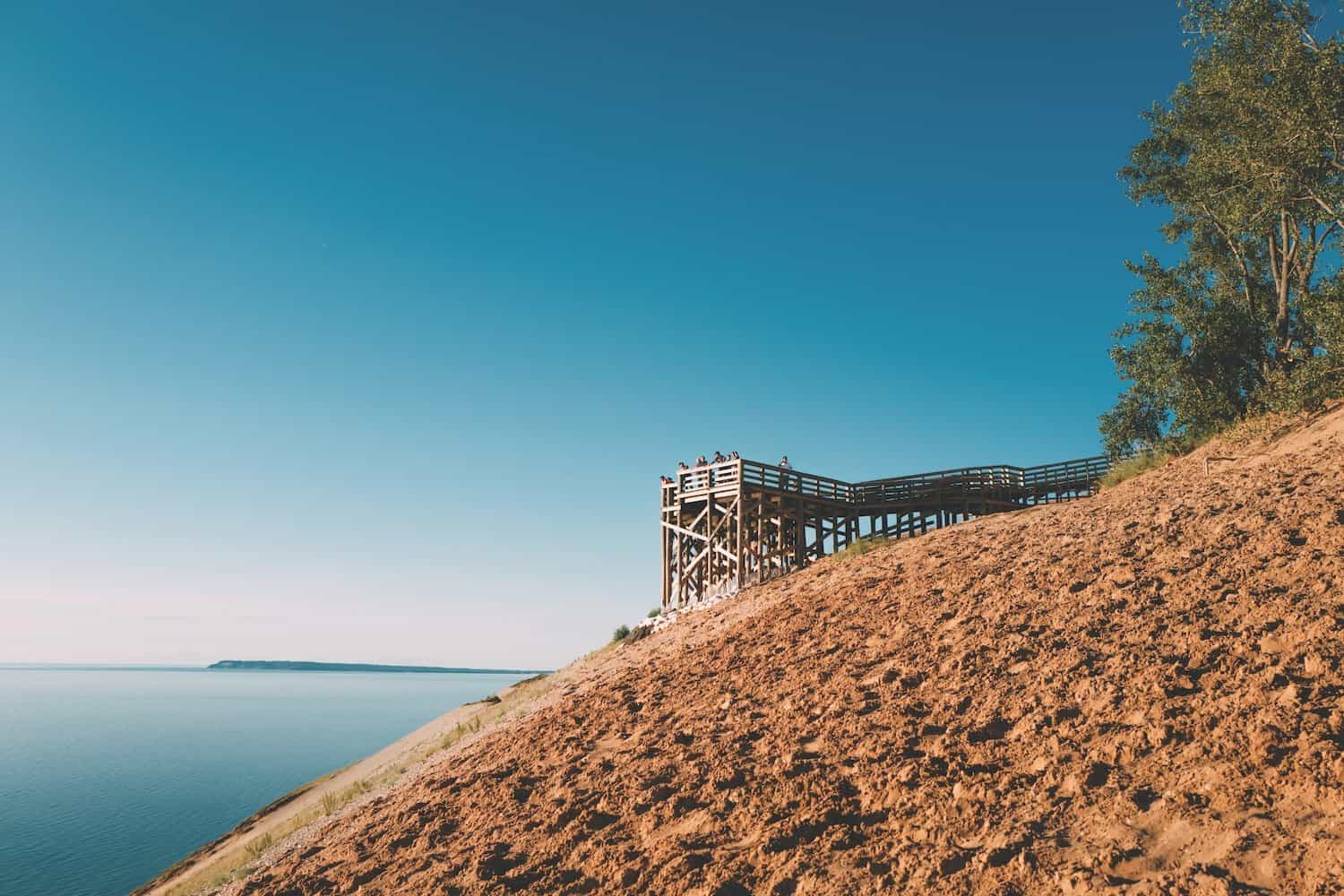 CAUTION: Descending the Lake Michigan bluff causes erosion and is dangerous. The steep grade makes footing difficult and there is danger from falling rocks. The return climb is extremely strenuous.

From this view, you can see what is left of the dune that lent its name to the entire 111-square-mile Sleeping Bear Dunes National Lakeshore. The dune was formed some 2,000 years ago by Lake Michigan winds depositing sand from the bluff. It once stood 230 feet above Lake Michigan. When the dune was forming, it was not at the edge of the bluff, but somewhat inland. Wind carried sand inland and deposited it to form the Sleeping Bear Dune.

By 1961, the dune was only 132 feet high, and by 1980, it was down to 103 feet. The process is a continuing one. The major cause of the dune’s erosion is wave action wearing away the base of the plateau on which the dune rests. As the west side of the dune loses support, it cascades down the hill. The wind, too, is a major agent of erosion, removing sand and destroying the dune’s plant cover. What does the future hold? It seems that the present trend will continue and it is only a matter of time until the Bear disappears completely.

The small lake below is North Bar Lake. The name describes how the lake formed: it is ponded behind a sandbar. At times, the sandbar builds up and separates North Bar Lake from Lake Michigan. At other times, a small connecting channel exists between the two.

North Bar Lake occupies part of a former bay on Lake Michigan. This ancient bay was flanked by headlands on both sides: Empire Bluffs on the south and Sleeping Bear Bluffs on the north. Shorelines have a natural tendency to become straighter with time. Wave action focuses on the headlands and wears them back, while shoreline currents carry sediment to the quiet bays and fill them in. Deeper parts of the bay are often left as lakes when sand fills in the shallower parts. The same process that formed North Bar Lake also formed many of the other lakes in Northern Michigan including Glen, Crystal, Elk and Torch Lakes, for example.

There is also a nice picnic area at this stop. 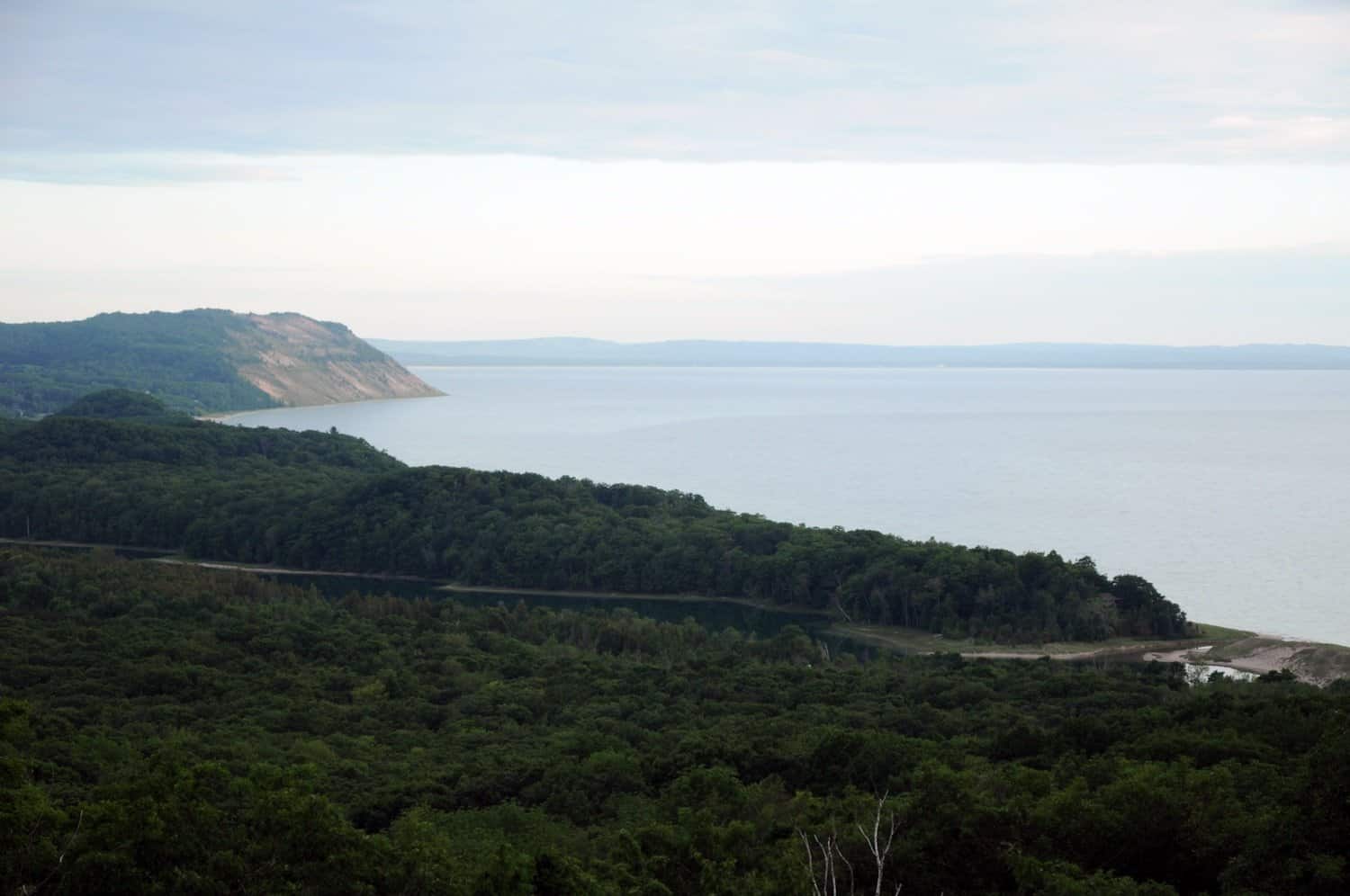 Notice that the pine trees at the side of the road are all about the same size and are not mixed with other kinds of trees. This is a pine plantation. You can estimate the age of the trees by counting the whorls of branches. These trees were planted before the land became part of the national lakeshore.

Logging and farming played an important role in Michigan’s history but left many tracts of land depleted. Property owners planted pine trees in an effort to improve their land. They serve a number of purposes: they prevent soil erosion, provide a windbreak, yield a timber crop and provide some wildlife habitat. Yet, for all their benefits, pine plantations are out of place in the national lakeshore. The park was set aside to preserve the natural environment. Therefore, native forest growth is more desirable here than pine plantations. In some parts of the park, portions of pine plantations have been cut selectively to encourage a mingling of natural growth among the trees.