Get to Know Earl Young, the Man Behind Charlevoix’s Quirky-Cool Mushroom Houses 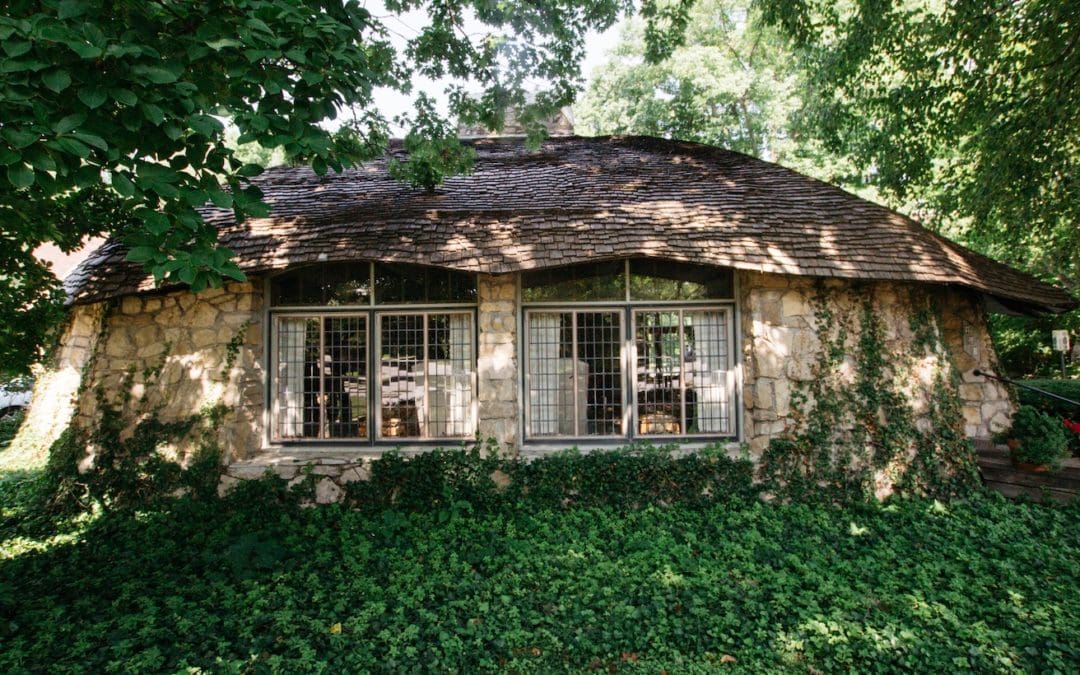 Almost 50 years after his death, Charlevoix’s Earl Young and his stone masterpieces are getting fresh, new recognition. Learn more about Young’s inspiration behind these quirky homes and how you can tour them for yourself by foot, boat or bus.

From his childhood home, a pretty little Victorian on Charlevoix’s State Street that still stands, Earl Young could walk to the Lake Michigan shore in a hop-skip. After heading west on Park Avenue, he turned his back on the booming turn-of-the-last-century downtown and quickly covered the short block to the cobalt water and sandy beach littered with wet, glistening stones. Those stones were magic to him. From his youth and throughout his lifetime, Young connected with rocks—from the shores, the fields and the quarries of Northern Michigan—in an almost supernatural way. It was as if they spoke to him of what they could become; how one could fit into another to construct a building, chimney or fence. They whispered of their connection to the earth, the water and the landscape; of giving a family shelter; of becoming a part of magnificent fireplaces that would draw families to them—and thus together. 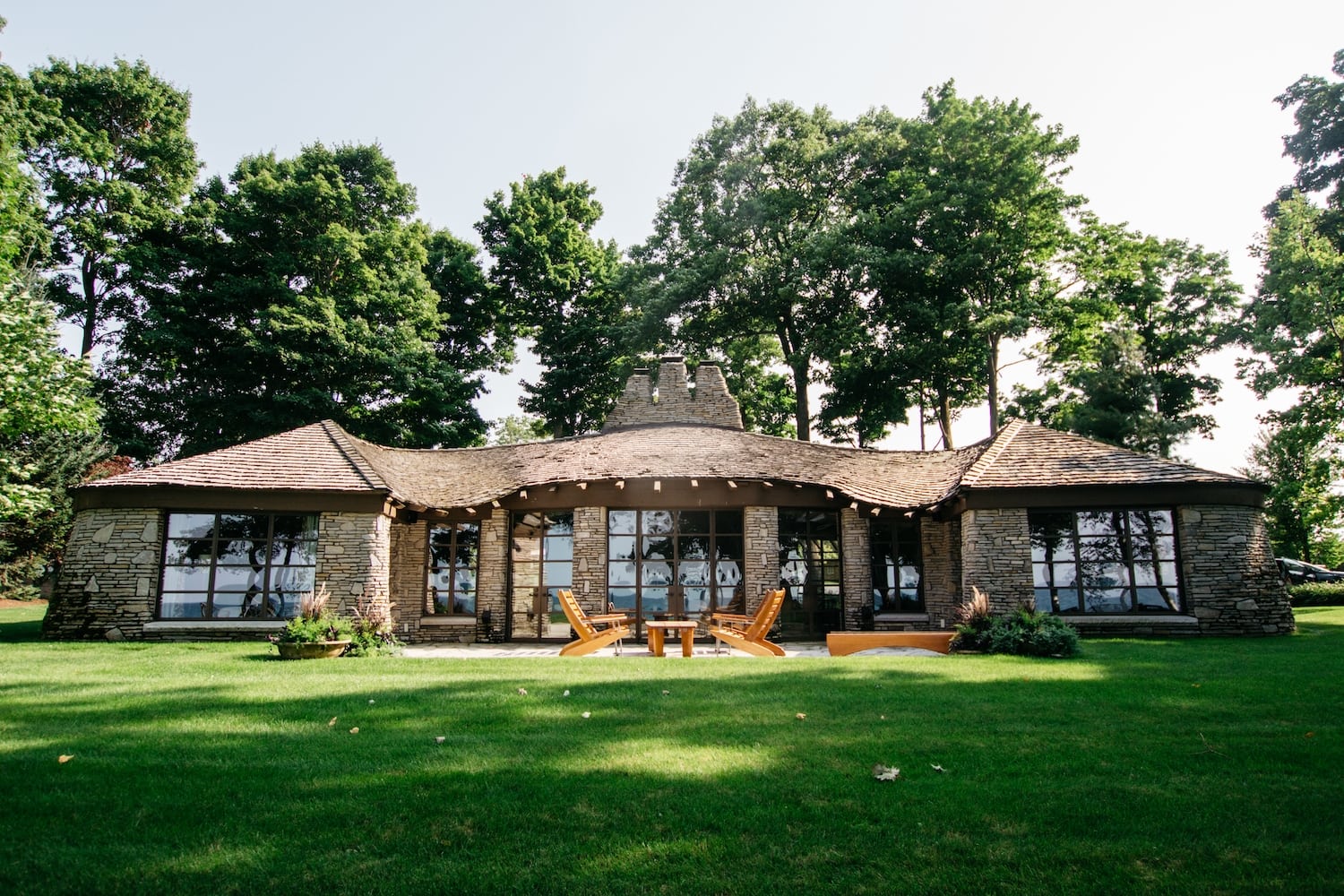 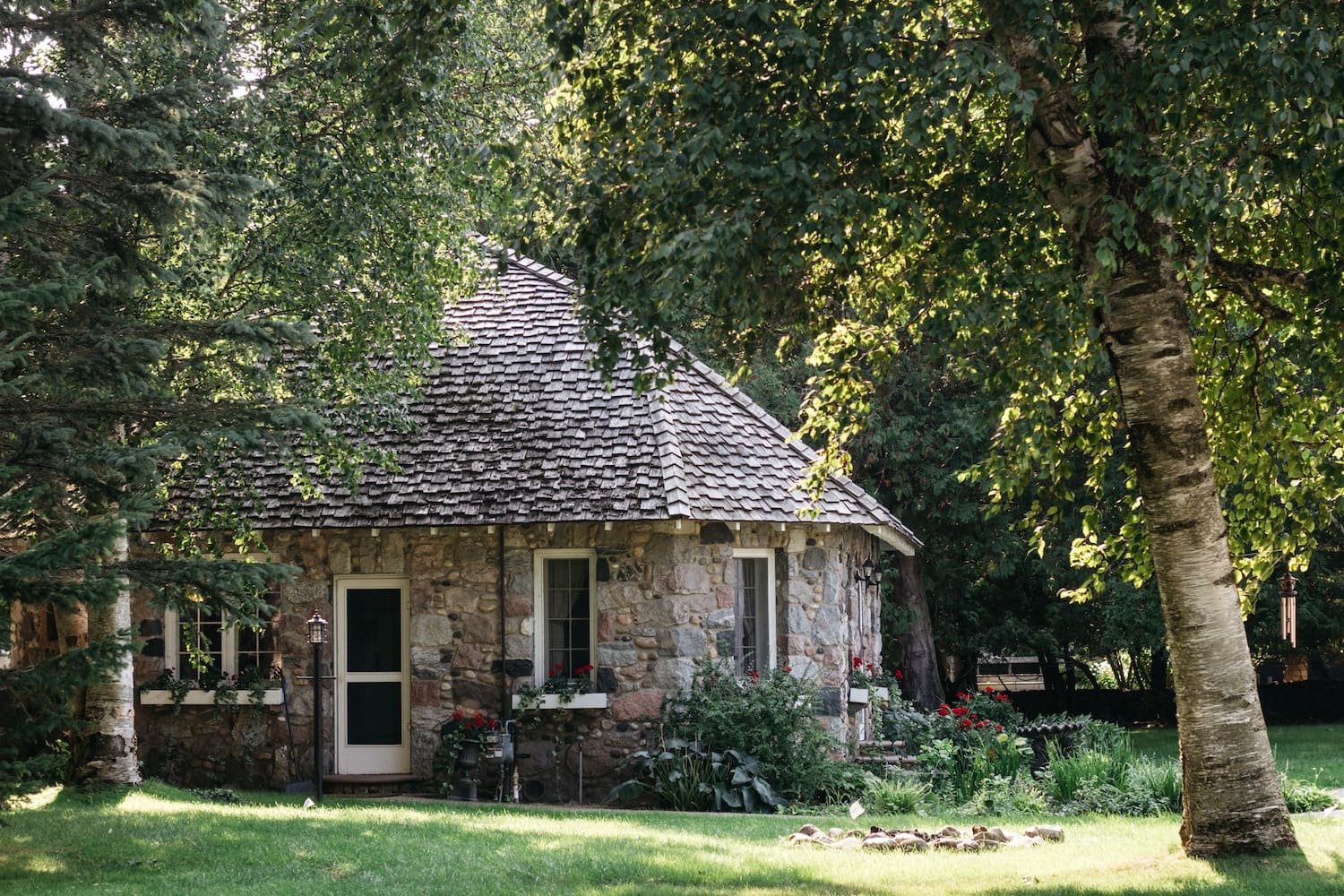 The Rose Cottage on the grounds of the Panama House

Many years after those hikes, when he’d become a designer and builder, Earl Young was known to bury or sometimes sink rocks and boulders that he found and hoped to use in a building one day. “Stones have their own personalities,” Young told a reporter for the Detroit Free Press in 1973. “People say I’m crazy when I say so, but they really do. Why, I found a stone that weighed 160 tons. It was formed 350 million years ago at the bottom of a warm sea and was carried here 10,000 years ago by glaciers.”

Young was 84 at the time of that interview and his posterity was already scattered around Charlevoix in 31 structures of his design that are marked by whimsical chimneys, wavy roofs clad in shake shingles, arched doorways, enchanted fireplaces, low ceilings, turrets and genius use of stone that can run the gamut to jewel-colored boulders to stacked limestone. They’ve been called Hobbit houses, mushroom houses, Hansel and Gretel houses, Flintstone houses, Harry Potter houses and many other names. Look at them closely and you find hints of a Swiss chalet, a Cotswold cottage, an Asian pagoda, European castles and Frank Lloyd Wright’s Prairie Style. The truth is, each building is so different and unique that they defy any one descriptor. 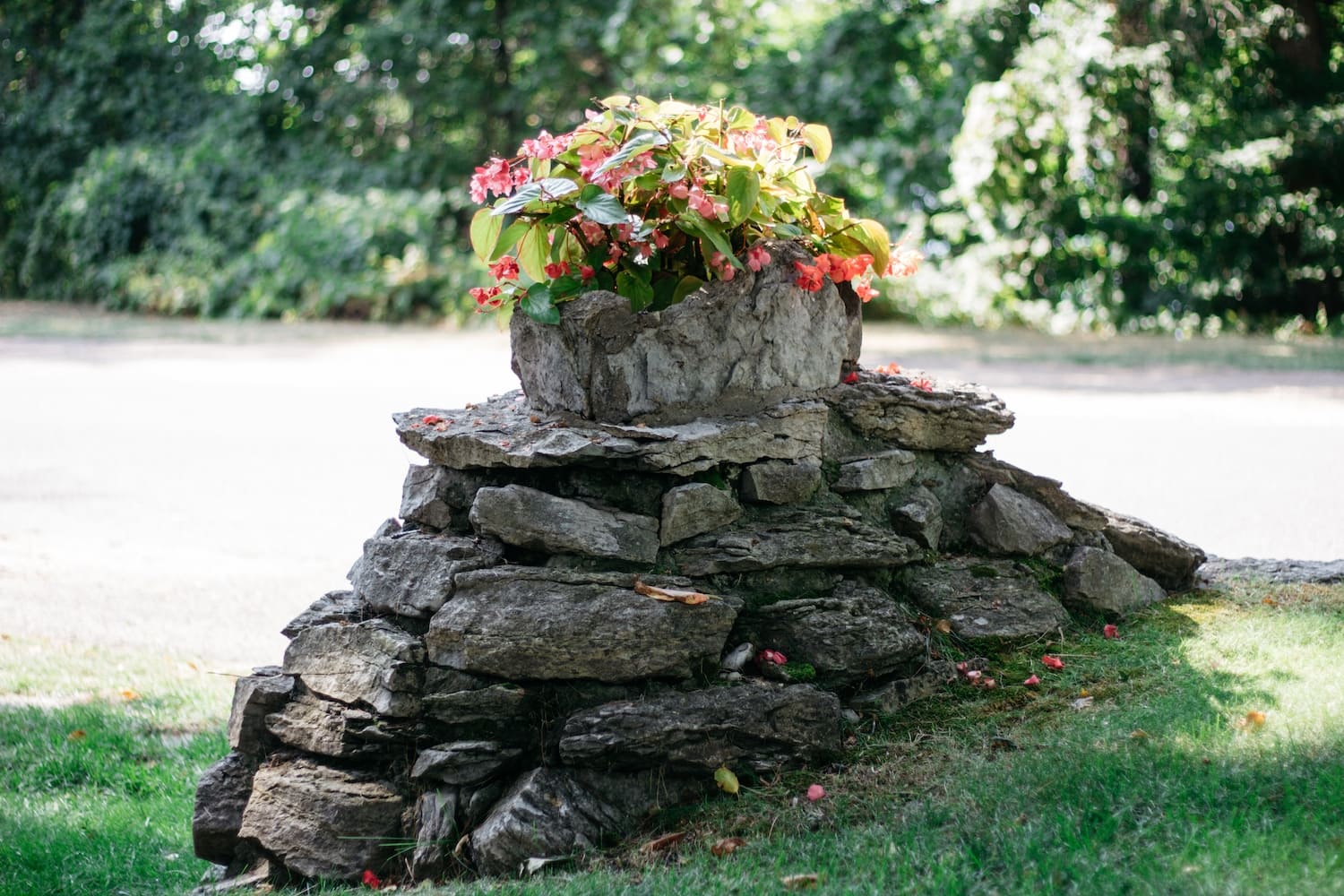 A Realtor by trade, Young was a self-taught photographer, architect, builder and mason. He read voraciously and in later years, he and his wife, Irene, who shared his artist’s soul, were enthusiastic world travelers. He took inspiration mostly from the earth and landscape, but he wasn’t afraid to lift cues from the emerging architectural styles of the era. He worked without blueprints, drawing pictures in the dirt to show his workmen what he wanted built—unless Irene figured out what was in his brain in time to sketch it out for the workmen.

After building one home on Park Avenue, across the road from the shoreline he walked as a youth, Young was ready for what David Miles, curator of the Charlevoix Historical Society, refers to as an “explosion of creativity.” It would be a development called Boulder Park and it would be located a half-mile west of the Park Avenue homes. The crown jewel would be, and still is, a home called Boulder Manor. 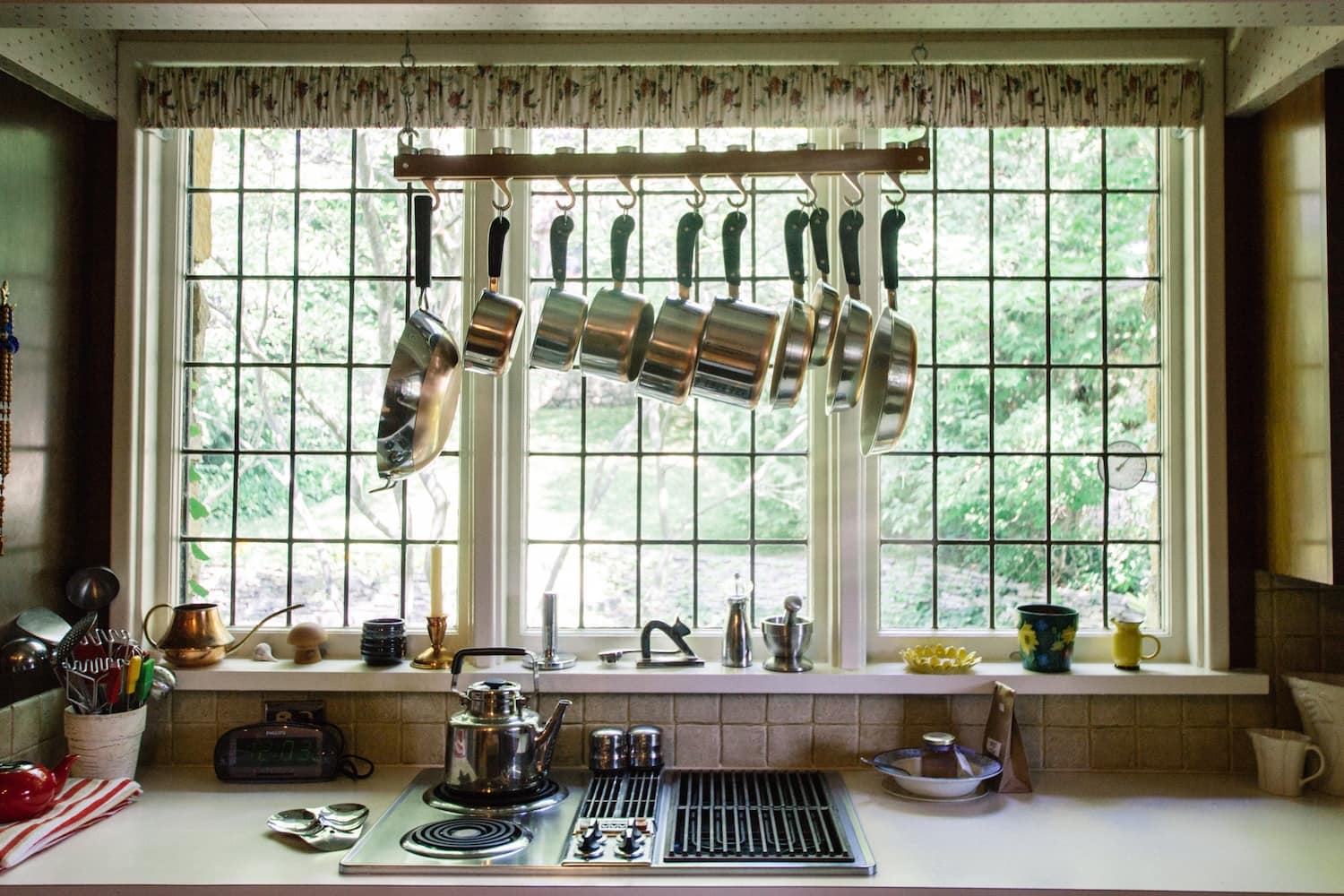 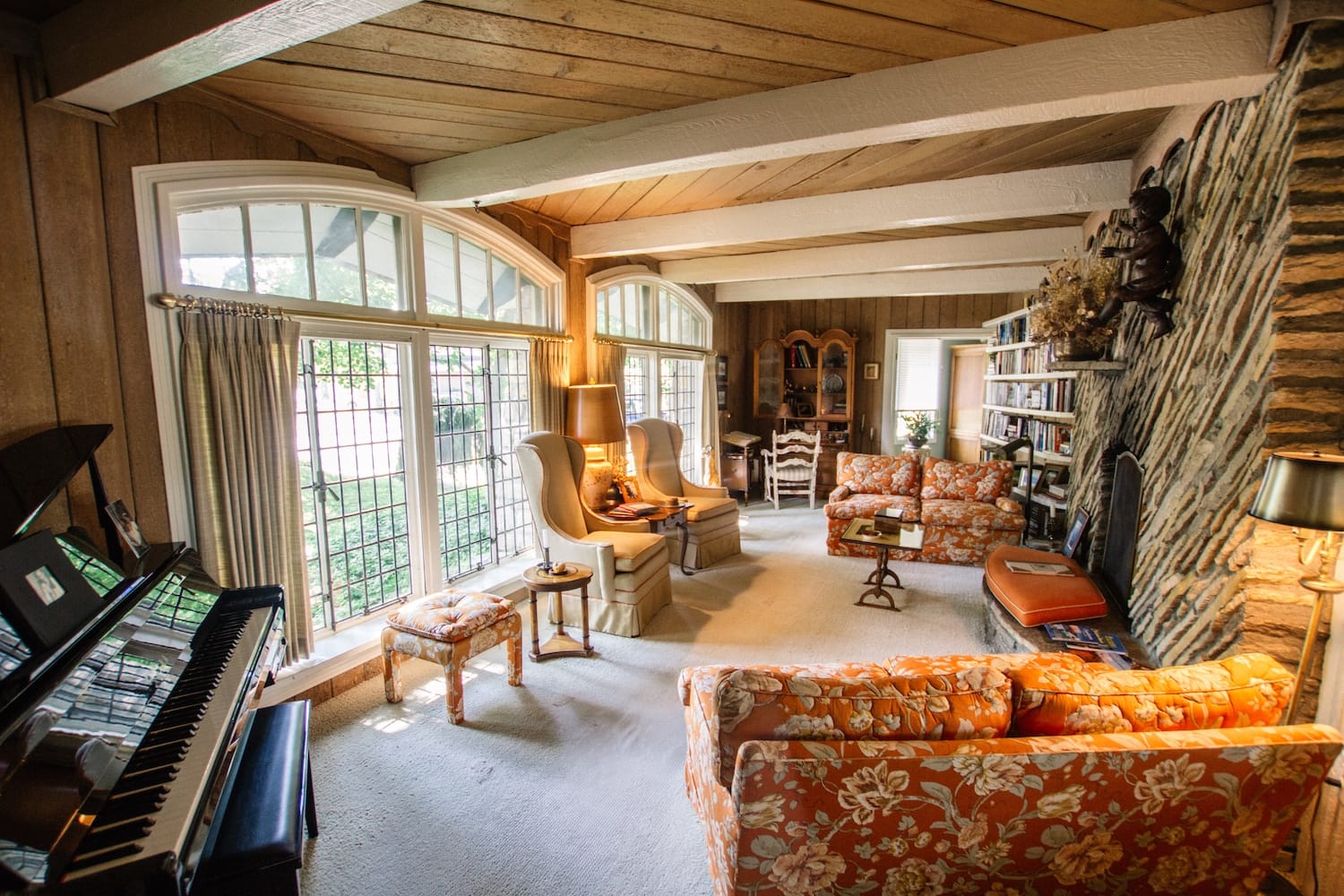 “Townspeople were saying, ‘What in God’s name is that man up to out there,’” says Miles. Boulder Manor’s walls and chimney are clad in fabulously large boulders that Miles explains as looking like they landed together in a kind of “reverse Big Bang Theory.”

Creativity aside, the structure is a feat of construction, especially given hydraulic front loaders weren’t even invented yet. “I was driving by just the other day and noticed some of those boulders,” says Bob Drost, a Charlevoix landscaper who regularly deals in moving massive rocks. “One of them must have weighed two tons plus. It blows my mind. I would give a lot to have spent a day with him before he died.” 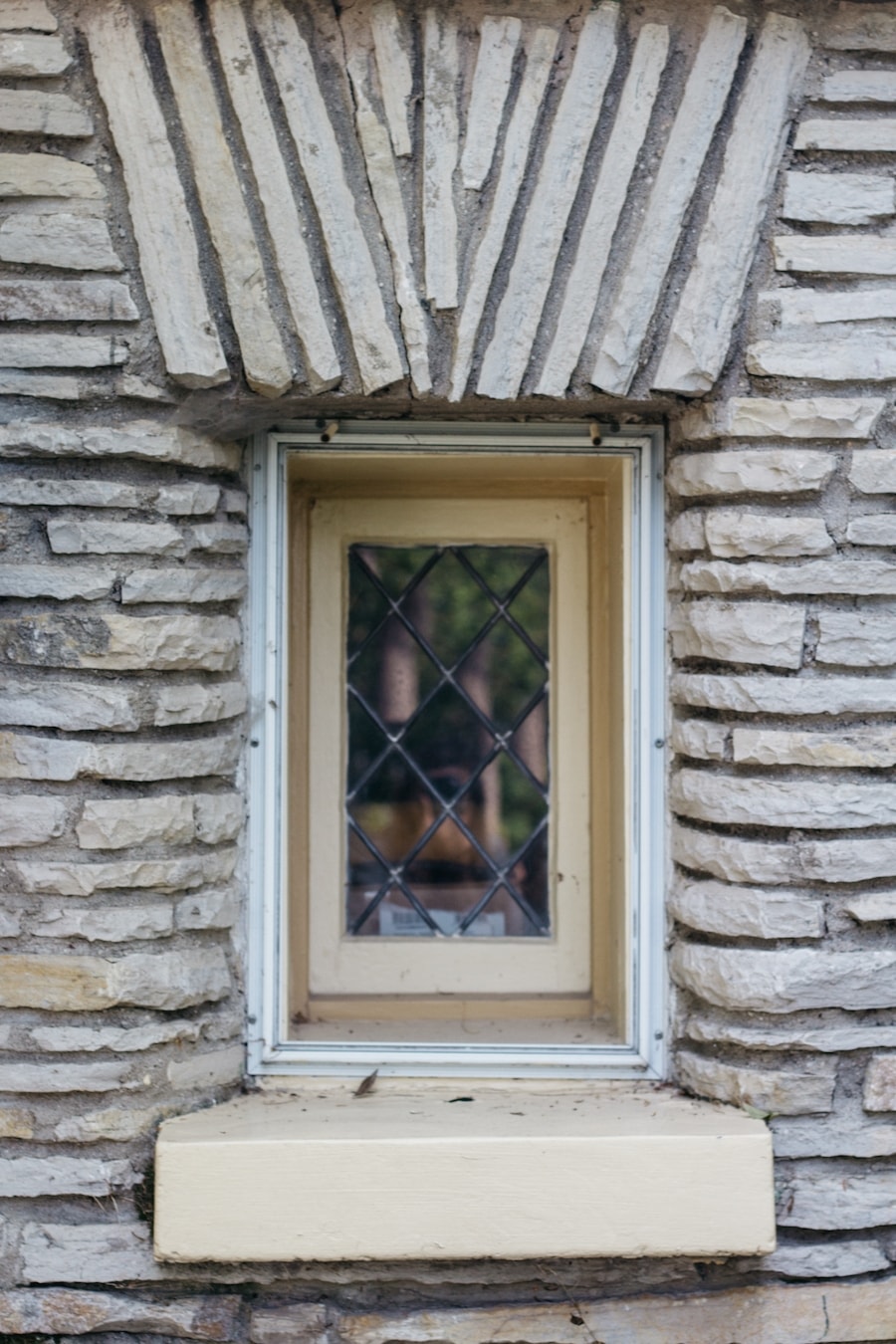 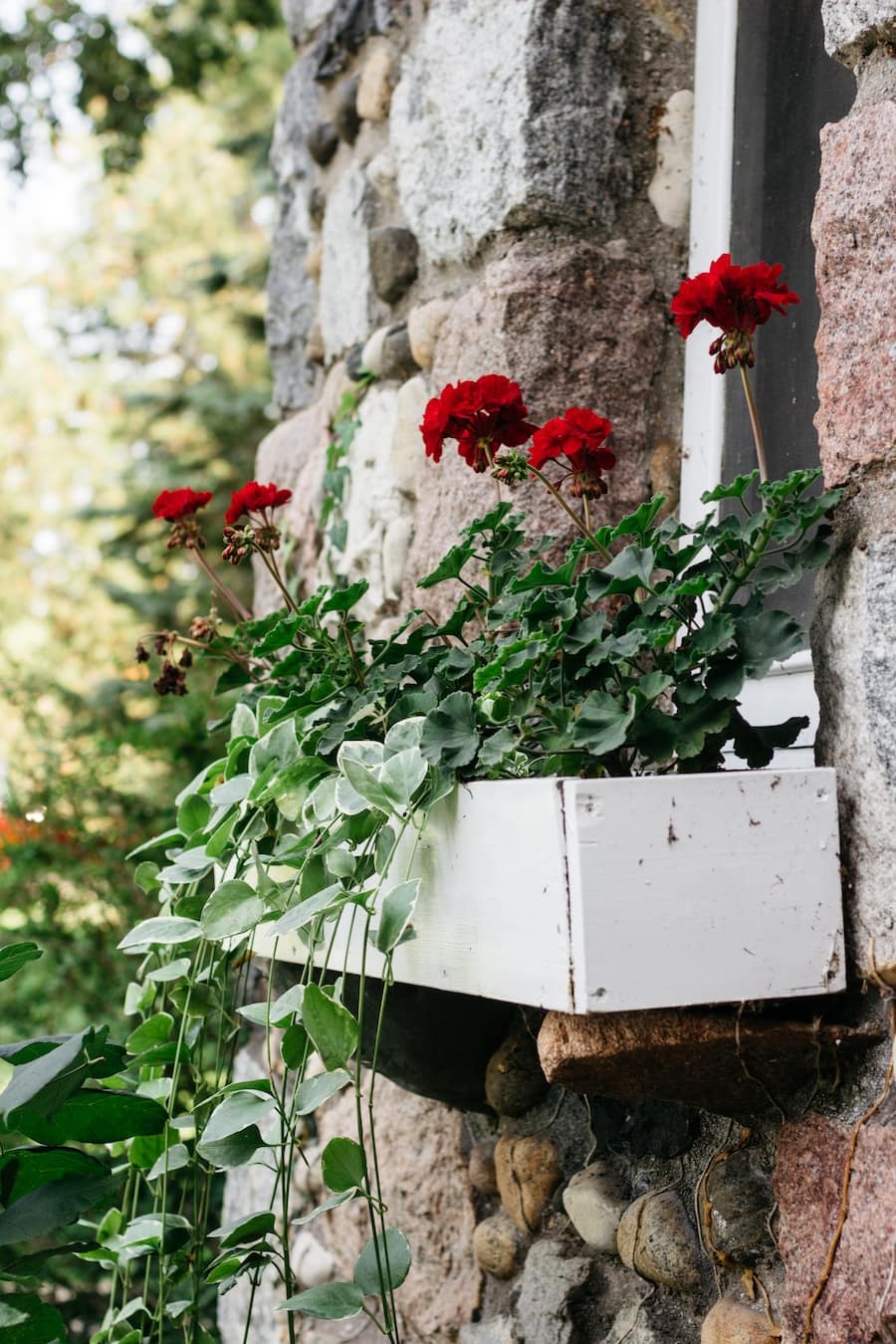 The buildings are a gift indeed to this beautiful little town. Young’s pièce de résistance, the stone and turreted Stafford’s Weathervane Restaurant (finished in 1954) sprawls regally on the north shore of the channel that connects Round Lake with Lake Michigan. The drawbridge that opens to let boats pass from lake to lake sits in its shadow. Young knew how to play to the dramatic.

As the decades passed, Young and his work became Charlevoix institutions. Until his death in 1975 he kept an office in the Weathervane. He walked there almost daily—leaning on a walking stick for support, a beret on his head, a scarf around his neck and his poodle, Pamper, on a leash.

While Charlevoix has always appreciated Young and his work, for decades after his death the buildings got little national or even regional recognition. There were reasons for that—Young was self-taught (he dropped out of University of Michigan’s school of architecture after a year because it was too stifling), most of his clients weren’t terribly wealthy and he worked exclusively in small-town Charlevoix, all factors that made it difficult for him to build a wide-ranging reputation. In addition, many of his homes were defined by low ceilings, almost nonexistent kitchens (cooking wasn’t a priority to Young) and small rooms. It took people who really understood Young’s vision for buildings that hugged their landscape to buy in. 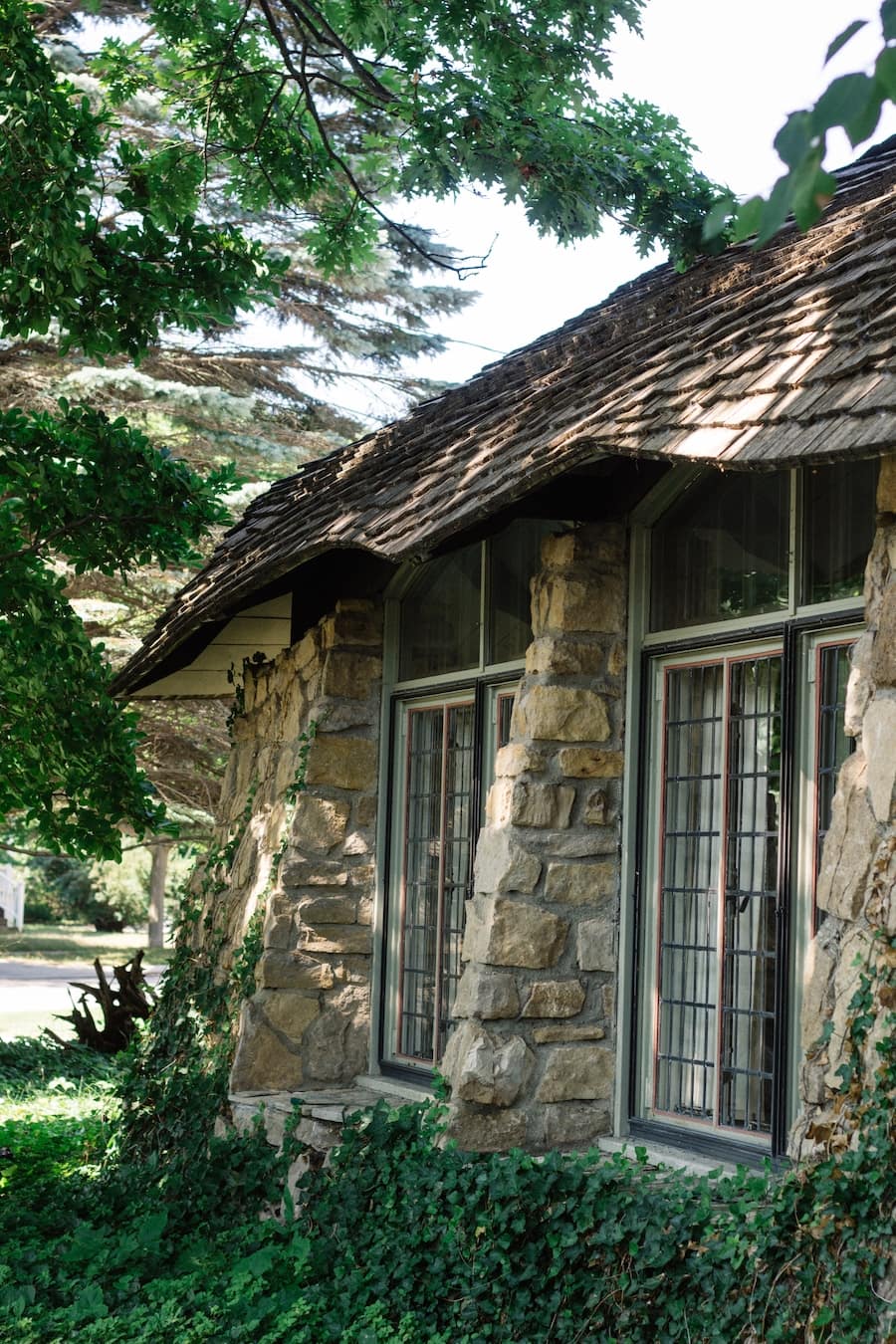 Fast forward to a summer day in 2004, when Miles received a mildly panicked call from the Charlevoix Chamber of Commerce. It seems there was a bus tour in town and none of the tourists aboard wanted to shop. Could Miles find something for them to do? He was aboard the bus 25 minutes later, directing the driver to cruise past Young’s buildings while he narrated. His script came naturally. Young had been a friend of Miles’s father and Miles had grown up with the houses as a neighborhood fixture. It wasn’t until, taking a walk one day soon after Young’s death, that Miles decided to pause and look, really look, at the buildings. “It was like being hit on the head with a 2-by-4,” he says. “They just came alive.”

The bus tour was a huge hit and led to regularly scheduled tours, plus guided and self-guided walking tours, all sponsored by the historical society. Last summer, some 3,000 people took the tours. Add to that another 1,000 pairs of eyes on Young’s buildings, courtesy of Edith Pair and her delightful GEM car tours that run morning to night from May through October. An artist who once had a gallery in Young’s former office in the Weathervane, Pair decided to launch her tour business after fielding question after question about him. 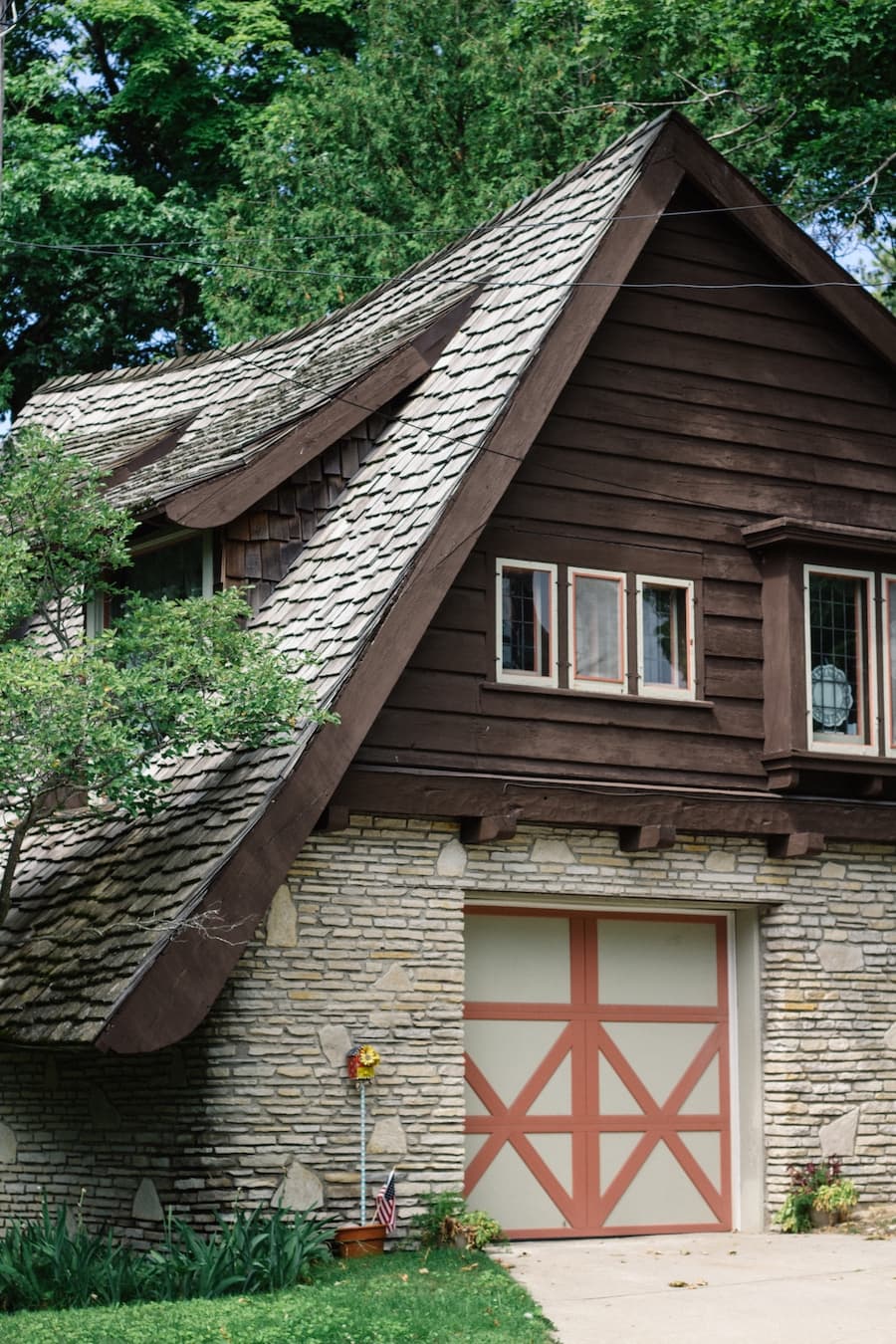 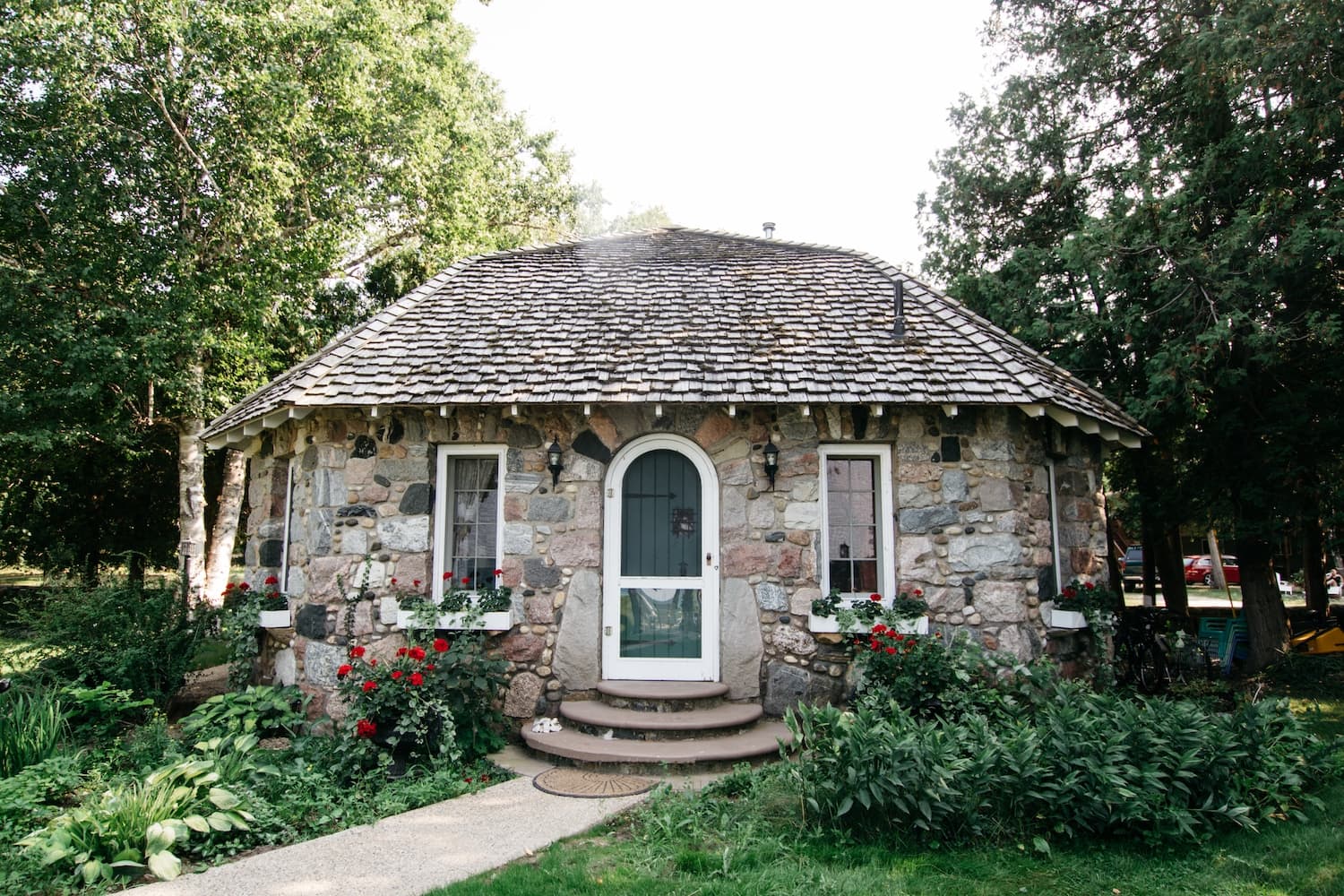 “Word has gotten out about Earl Young and people—including architects—are coming from all over the country now,” Miles says. The comparison to Frank Lloyd Wright and his designs that hugged the landscape and use of organic materials is as common now as it is inevitable. (Although Young, who always insisted his only influence was Mother Nature, would have bristled at it!)

Recently, the Charlevoix City Council designated a historic district for the Young homes in the Park Avenue/Clinton Street block, meaning that the exterior of the homes can’t be altered, only historically preserved. On the heels of that came a Michigan Regional Emmy for a documentary about Young called The Wizard of Boulder Park. This year too, an Earl Young-designed hotel across from the Weathervane, long called The Lodge, is being renovated and rechristened as Hotel Earl.

Finally, due out at the end of this year is a book published by the Charlevoix Historical Society Press, authored by Miles, that details, building by building, Young’s evolution as an artist, builder and designer—from his first Craftsman-esque home finished in 1921, through the mid-century modern Sucher home constructed of stacked Onaway ledgestone, and beyond.

At long last, anyone who cares to listen can learn what the rocks whispered to the boy.

Elizabeth Edwards is managing editor at Traverse. // Rachel Haggerty is a student at Northern Michigan University and was a photography intern with Traverse. She is a South Lyon native whose favorite Michigan spot is Echo Lake Nature Preserve in the U.P.

How to View the Earl Young Homes: Boat, Bus or Walking Tours

Earl Young built and designed 26 homes and four businesses in Charlevoix between 1918 and the early 1950s, all from boulders he collected while exploring the shoreline and forests in the area. Allowing the shape of the rocks to determine each building’s style, the homes are reminiscent of Tolkien’s Middle Earth, with touches like wavy roofs and chimneys that look like snow is melting from them. The homes are sometimes known as “Hobbit Houses,” while others refer to them as the “Mushroom Houses” for their squat, organic appearance. Check out these two ways to get acquainted with Earl Young’s homes.

To set up your walking, bus or private vehicle tour, contact the Charlevoix Historical Society. The photo book, Mushroom Houses of Charlevoix, also available from the society, is a great place to start your Earl Young tour. 231.547.0373.

To take the Mushroom House Tour aboard a GEM car with Edith Pair go to mushroomhousetours.com. Join your tour guide Edith Pair (or one of her employees) for a relaxing cruise through the Charlevoix neighborhoods where Young built his homes. Pair’s commentary is lively and informative.