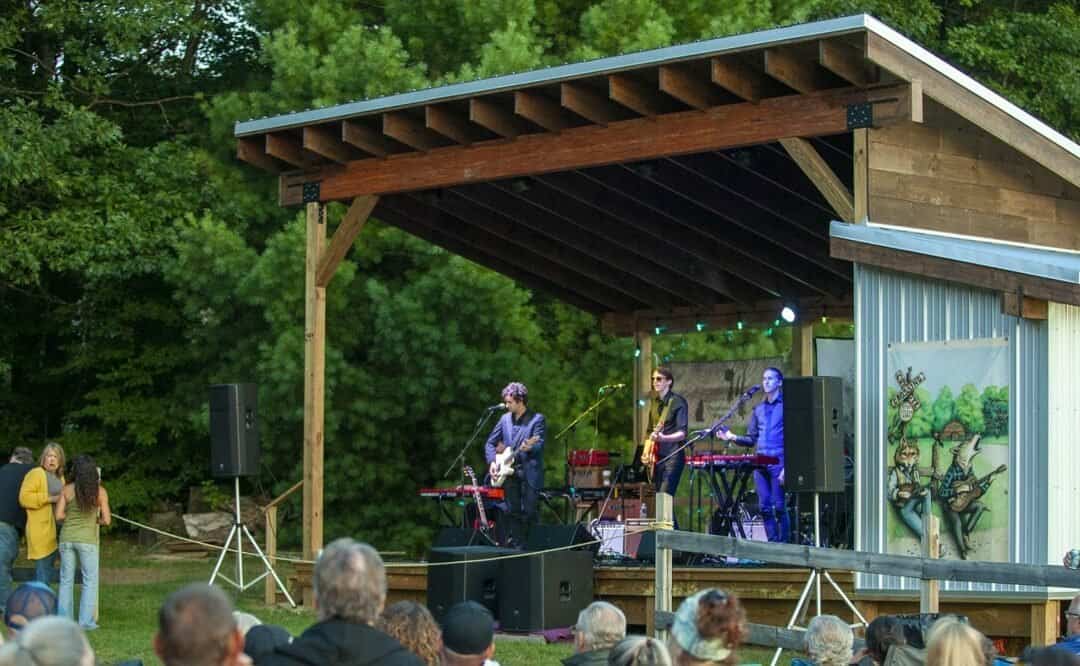 Summer events are making a comeback for 2021. From a Parallel 45 Benefête to Beatles vs. The Four Seasons, there’s an event for everyone in Northern Michigan this summer. View the wide variety and buy tickets below.

Don’t miss this one-night-only celebration and fundraiser in Traverse City to support P45 Theatre’s cultural comeback. Join artists from the P45 Theatre Company and your fellow theatre lovers for a safe and socially-distanced evening outdoors with delicious appetizers, bubbly drinks and a live cabaret of musical selections co-directed by Kit McKay and Nick Viox, and featuring the first look at the 2021 summer company.

See Roosevelt Diggs live at Coyote Crossing Resort’s outdoor music venue in Cadillac. The band brings an energetic blend of folk, country, blues, bluegrass and rock-n-roll. At its base: two brothers, Levi and Logan Duddles, who have spent a lifetime creating and writing music together. With the addition of the musical backbone of Jon Shears on the upright bass and John Ellsworth on percussion, they transformed from two brothers picking on stringed instruments to a band with a fire inside. Since its beginning in 2008, Roosevelt Diggs has made its way around Michigan performing in some of the finest concert venues, breweries and festivals.

Sojourn Lakeside Resort in Gaylord announces its third annual Sojourn Summer Concert Series. The bands will perform live outdoors in a lakeside setting. Influenced by Texas roots and artists such as Reckless Kelly and Eric Church, the Drew Hale Band’s music pays homage to the red dirt country and southern rock scenes, as well as paints a picture of their love for the people and culture of Michigan, where the band calls home.

A vibrant, boiled-down unearthing of the 1958 classic The Sound of Music directed by P45’s Artistic Director Kit McKay. More than 60 years after The Sound of Music blazed onto the American stage, this intimate production offers the opportunity to experience Rodgers and Hammerstein’s unabashedly romantic masterpiece as though for the first time. Catch a performance at the P45 Amphitheatre at Civic Center Park in Traverse City.

Dust off your bell-bottoms, dress up and be ready to party! Toppermost is an authentic Beatles tribute that recreates the energy and youthfulness of the iconic band. Their shows are spontaneous, infectious, funny and great for all ages. Celebrate the ’60s and ’70s at Rudbeckia Winery and Burnt Marshmallow Brewing in Petoskey.

Drew and the boys are returning to Coyote Crossing Resort in Cadillac! Throughout Michigan, the name Drew Hale is synonymous with powerful vocals, compelling lyrics and haunting melodies.

Peter’s mission for two decades has been to celebrate life through music and stories, and he especially loves sharing the rhythms and history of America’s original music, ragtime piano. See him at the brand new Pine Performance Center in Curtis.

Head to Coyote Crossing Resort in Cadillac for this two-in-one show. Luke Winslow-King’s latest album is an example of craftsmanship at the highest level, radiating warmth and timeless elegance. Adept at mixing country, blues, R&B, rock ‘n’ roll and folk influences intuitively and masterfully, Luke shapes a mood from many sources and shepherds it to a unifying place of acceptance and hope.

Canadian Brass trumpeter Brandon Ridenour, performing in concert with the Great Lakes Chamber Orchestra, will present a great selection of tunes by The Beatles. In addition, the Orchestra will perform Astor Piazzolla’s “The Four Seasons” in this entertaining mash-up in which old meets new at Great Lakes Center for the Arts in Bay Harbor.

Meet Charlie Brown and the entire Peanuts gang as they explore life’s great questions and celebrate the joy of being together. This Parallel 45 production is a great way to help the littlest audience members cope with big feelings and develop resilience in an increasingly challenging world. Catch a performance at the P45 Amphitheatre at Civic Center Park in Traverse City.

An edgy, original pop musical created and performed by P45’s all-new Youthquake Company of teen artists. This fresh spin on Hans Christen Anderson’s The Ugly Duckling is told through the lens of local teen performers with a soundtrack of Broadway and pop faves. Tickets are Pay What You Can with a suggested ticket price of $15. Held at the P45 Amphitheatre at Civic Center Park in Traverse City.

Each season, Parallel 45 Theatre in Traverse City invites audiences to a series of play-readings featuring the work of daring playwrights produced across the country and around the world. These plays allow us to include multiple voices in important, ongoing conversations around race, religion, gender identity and more.

Coyote Crossing Resort is welcoming Myron Elkins & The Dying Breed back to Cadillac! Their eclectic yet hillbilly-esque sound is hardly traditional and sure to get you groovin’.

Through an organic tethering of soulful singing, stellar guitar work, thoughtful songwriting and dynamic musical arrangement, Josh Martin creates a unique Appalachian listening experience. His acclaimed 2019 album, Nothing Holding Me, is an exploration of life’s ironies, as told and sung by a “modern mountain man.” See Josh live at Crooked Tree Arts Center in Petoskey.

Opening with Sam Morrow, creator of Gettin’ By on Gettin’ Down, reminds us that the things that set him apart are the very same things that help him stand out, and throughout Michigan, the name Drew Hale is synonymous with powerful vocals, compelling lyrics and haunting melodies. See them at Coyote Crossing Resort in Cadillac.

The Barbarossa Brothers are fantastic musicians and simply really good people. “We enjoyed their concert so much last time we invited them back so more of you can also experience a wonderful evening of music lakeside,” says the team at Sojourn Lakeside Resort in Gaylord. Bring your own snacks, drinks and chairs.

An accomplished songwriter, storyteller and performer with a deep interest in the history of American roots music, Sayles’s live performances evoke a modern interpretation of the coffee house shows of the 1950s and ’60s, while still keeping one foot grounded in the beer halls, honky-tonks and night clubs of the recent past and present. Experience his music at Coyote Crossing Resort in Cadillac.