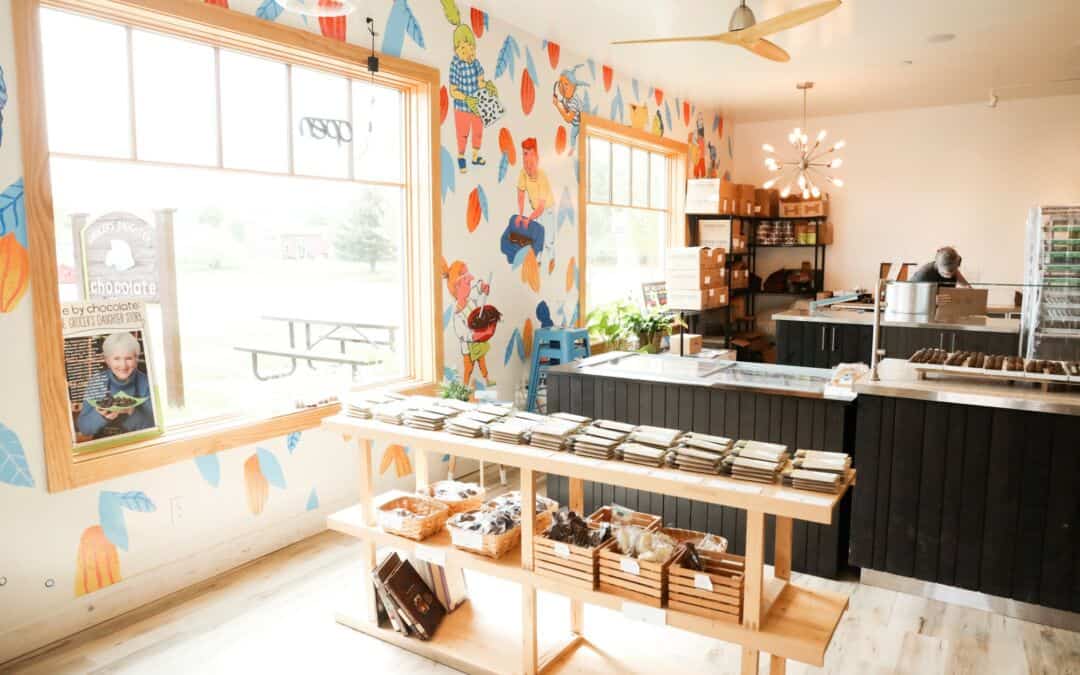 This local chocolate shop in Empire, MI is crafting chocolate treats made with only the most premium quality, traceable cocoa. With more than 26,000 pounds of organic direct trade chocolate from Ecuadorian farms, Grocer’s Daughter Chocolate is ready to take on the 2021 season. Learn how and why this business is producing high-quality chocolates in a small town on Lake Michigan.

Ecuador’s history seems shrouded in a foggy jungle tangle as confusing as the trails of their rain forests that are shouldered by the Andes Mountains. It is thought that Asian nomads reached the South American continent around 12,000 BC, joined thereafter by Polynesian colonization followed by a stable Duchicela lineage for 150 years, then Spaniards and Pizzaro and the spread of terror among the Indians. The history of this vibrant and beautiful country has been marked by fierce rivalry, occasional warfare and political instability. Today, though, Ecuador is peaceful and one of the safest countries to visit in South America.

Over 3,000 miles north of Ecuador, a fast-moving entrepreneurial business, nestled in Lake Michigan’s dune land in Empire, Michigan, is supported by a nonprofit lending institution to create an added slice of history-dependent upon one of Ecuador’s profound riches: extraordinary fine chocolate. So good, in fact, that it was common practice in Mayan communities for people to exchange a cacao-based beverage as they cemented an engagement between man or woman. Pure chocolate for pure love.

With $144,500 in lending support from Venture North Funding and Development in April 2021, the Empire enterprise, Grocer’s Daughter Chocolate, purchased 12 metric tons or over 26,000 pounds of organic direct trade chocolate from Ecuadorian farms. The inventory purchase was made through Jenny Samaniego of Conexion Chocolate who sources the premium chocolate, also known as couventure. The inventory provides 24 months of production for Grocer’s Daughter and two tons to sell to chocolatiers and chefs nationwide. Properly stored bulk chocolate holds for up to three years.

“We are one of the few chocolate businesses in the nation that offers delectable treats made only from premium quality, traceable cocoa,” said Jody Hayden who has owned Grocer’s Daughter Chocolates since 2013 along with spouse DC Hayden. “Ecuador is the top producer of fine cocoa in the world.”

“A great company. One we’re proud to serve,” says Laura Galbraith, President of Venture North. “Between 2019 and 2021, Grocer’s Daughter Chocolate revenues jumped 100 percent. By buying chocolate in this volume, they have a savings of around $10,000. The project will enable the retention of five jobs with family-sustaining wages and benefits, the creation of two new full-time positions within the next year and 8-10 part-time positions in the Empire area. Much to their credit, they plow cash back into the business, strengthening their employee base through wage increases, wellness stipends, paid holidays, and training. They want their employees to build their careers at Grocer’s Daughter. They set a high bar for stewardship – of their company, employees and, of course, their drop-dead great chocolates.” Galbraith said that profits and savings will also support a new building to accommodate new business, additional production, and warehouse facilities.

Hayden talks glowingly about budding new products like chocolate gelato, “frooky and wooky” (frozen and warm) chocolate laced cookies, ice cream bars and more, all with healthy doses of Ecuadorian fine chocolate. She extolls the value of partners and the opportunities to learn from the best, including colleagues from iconic Zingermann’s in Ann Arbor. Grocer’s Daughter sources products from local suppliers, supports dozens of local producers in Michigan such as the Farmer’s Creamery in Mio and Sleeping Bear Apiary Farm in Beulah.

But the best chocolate product and global partnerships could not outflank one foe: COVID-19.

“In addition to pervasive safety concerns, COVID devastated supply chains worldwide,” Hayden says. “What once took a day now takes at least three, and the cost of waterborne shipments has more than doubled. The only silver lining was that the despair and anxiety of COVID seemed to drive people to want to pamper themselves in ways that were safe and a bit extravagant. We were proud that, for some, this meant a self-serving moment to enjoy our products.” Chocolate, especially the best of its kind, makes everything seem a bit rosier.

As does talking with Hayden about Grocer’s Daughter, her travels and adventures, her foray into coffee and a very successful enterprise and her excitement about the future. Her path traverses from Iowa to Ohio, around the Atlantic Ocean and immersing herself in water at every pass. Always hands on, she has built relations like an Ambassador, with businesses in Mexico for supply of coffee to her present relationships and supplier in Ecuador. She approaches her work with vigor and discipline, including courses and training on overseas trade, fermenting and roasting, mastering flavors and more. She and the company also do what they can to help preserve and support the Ecuadorian chocolate base, threatened at times by short-sighted plans to produce higher yield but far lower quality product. She also has plans closer to home, including a “Chocolate Garden” on a next-door lot.

The Village of Empire is a wonderful place with warm, caring people and a commitment to the betterment of their community. It is the jumping-off point for millions making the endless pilgrimage to one of the most stunning places in the nation: Sleeping Bear National Lakeshore. It is also home base for Jody Hayden and family, career-minded chocolate lovers and a surprising connection with old-fashioned affection and love.

All brought to us by Grocer’s Daughter and the finest chocolate that the Ecuadorian rain forests can provide.