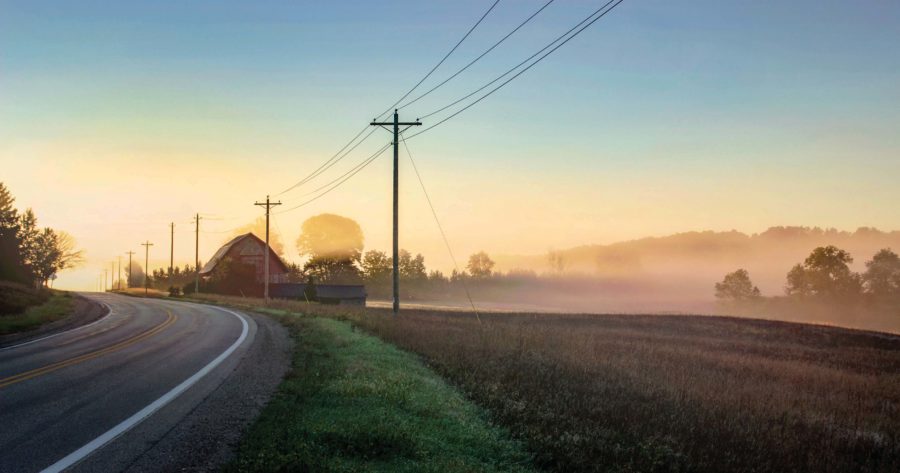 Two teenage boys agree to accompany their parents *gasp* on a 26-mile road trip and scavenger hunt along one of Northern Michigan’s most beautiful rural routes. Learn where they stopped, what they found and why you should do it this weekend.

Featured in the April 2021 issue of Traverse Magazine.

For more information on the Breezeway, visit the official website. We always recommend calling or checking online before visiting area businesses to ask about current offerings, hours and COVID-19 regulations.

Forced family fun is the name of the game when you have two teenage boys. So, when I heard about cruising “The Breezeway” through Antrim and Charlevoix counties for a day trip, I began my campaign. It was every mother’s dream: beautiful scenery, small adventures along the way assured by my homemade scavenger hunt and bonding time inside the confines of a car whether they liked it or not.

“It’ll be gorgeous!” I told them as they groaned. “There’s a corn maze… and donuts and apples… and a steam engine!” (Really, there is, and the youngest one perked up at this despite himself.) “And, get this,” I said, going over the Breezeway brochure, “there’s even a labyrinth!” “A labyrinth!?” my husband, Tim, chimed in. “We’re going!” I shot him a look. Finally, I pulled out my trump card, used for all negotiations with my family of boys: “There’s a great burger joint!” “I’m in!” the eldest said. 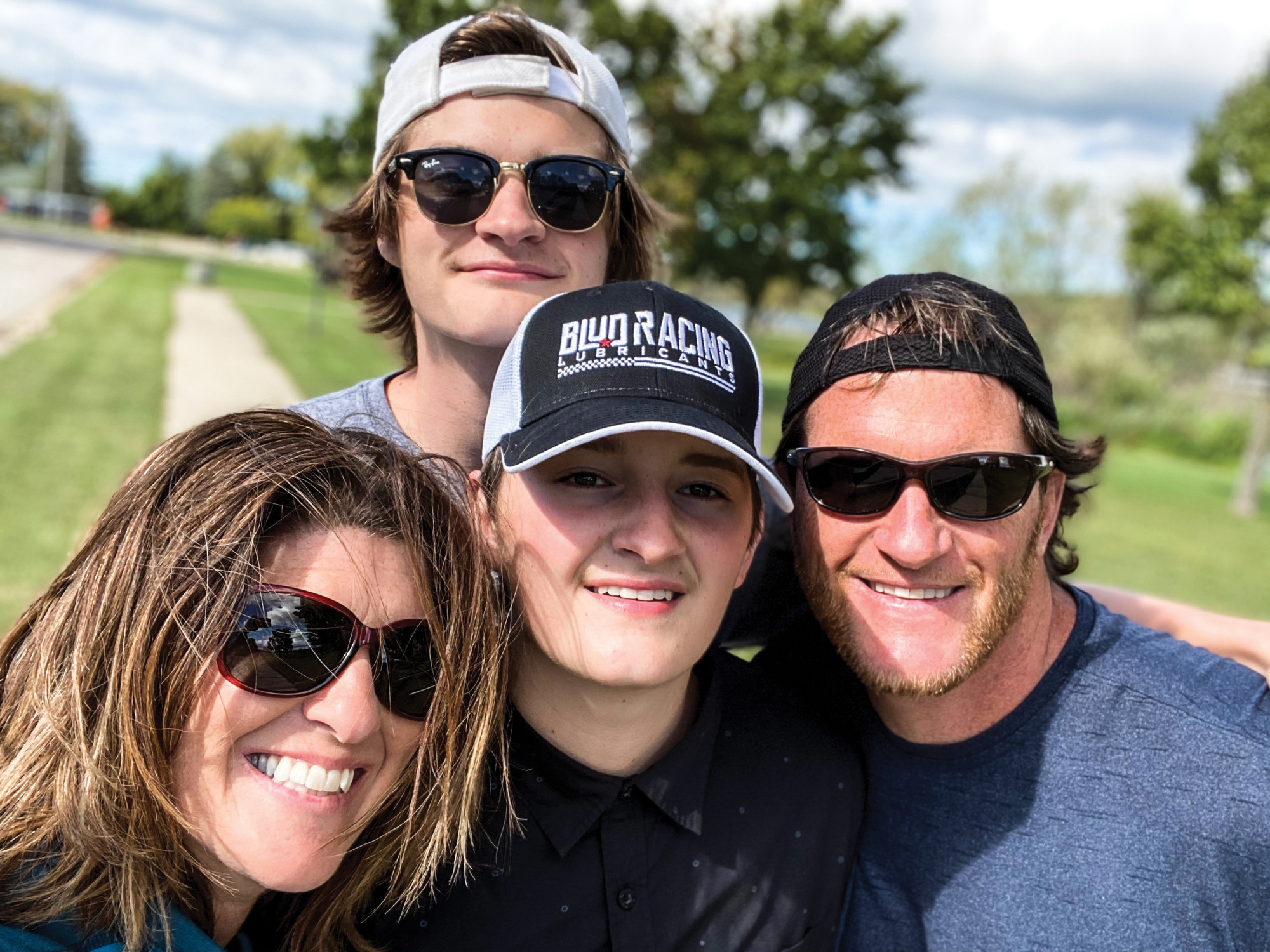 This photo and the rest of the photos in this story are by Kandace Chapple.

About the Nothern Michigan Breezeway

The Breezeway is a 26-mile rural ride along C-48 from Atwood (tucked on us-31) to Ellsworth, through east Jordan and ending in Boyne Falls (at US-131). The road cuts through a part of Michigan that is mostly untouched. Rolling hills, working farms and country homes set the scene, while the four breezeway towns offer the rest: antique stores, artists’ galleries, shopping, restaurants, lodging and growing downtowns with historical buildings to explore. Plus, along the way: the chain of lakes, nature preserves and drumlins (more on that later!).

The start of the Breezeway is in Atwood (dubbed “Atwood the Adorable” by locals) and Royal Farms Farm Market and Winery holds down the intersection of US-31 and C-48. I want apples and cider and… look, the corn maze! But I’m no fool. A corn maze is no way to start a day with teenagers. I’m gonna need to deliver on those burgers first. (Note: Royal Farms opens for the 2021 season in May.) “Keep going,” I say to Tim, my eyes straight ahead. I’ll march them through it later.

“I know, let’s find the drumlins!” I say. Small problem: None of us know what drumlins are. After online research, it turns out they are low, teardrop-shaped hills of sand, gravel and “glacial till.” They were shaped under glaciers, and as the ice melted away some 4,000 years ago, left behind to form a series of low hills. Kind of like “eggs in a basket,” according to Wikipedia. There are very few drumlin fields in the United States and two of them are in Michigan.

As I research, I discover another catch to the drumlins: They are best seen from above. I don’t tell the family this. This scavenger hunt is fun. I’m not giving up easily. We turn down C-48 and head east to look for the drumlins. “There!” One of the boys shouts as he points to a hill. I have no idea if it’s the drumlins. That looks like a hill to me, maybe even an “egg hill.” In the distance, I see a series of rolling hills spread out around us. It has to be! “We found them!” I declare. In satisfaction, the boys check it off our list. 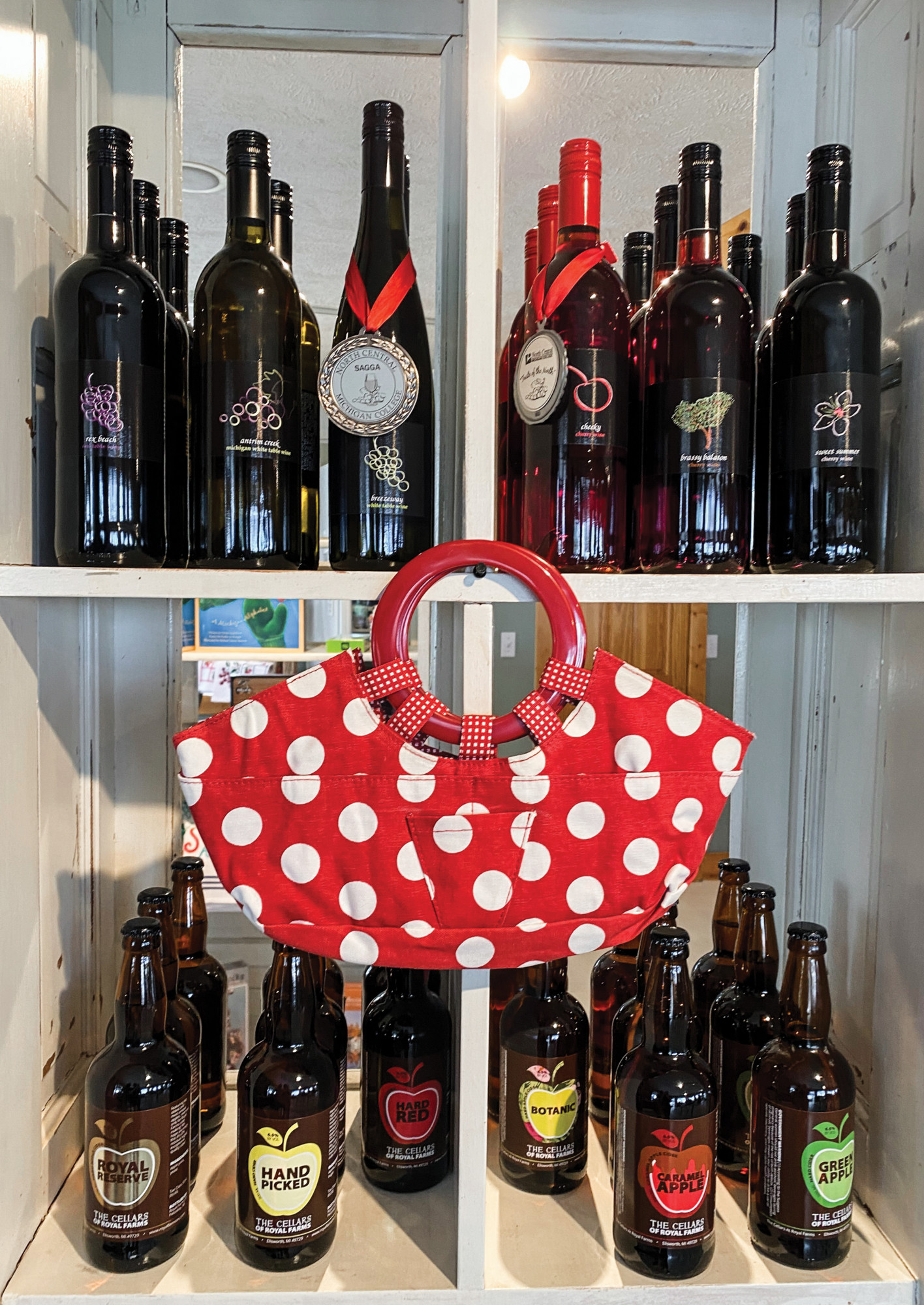 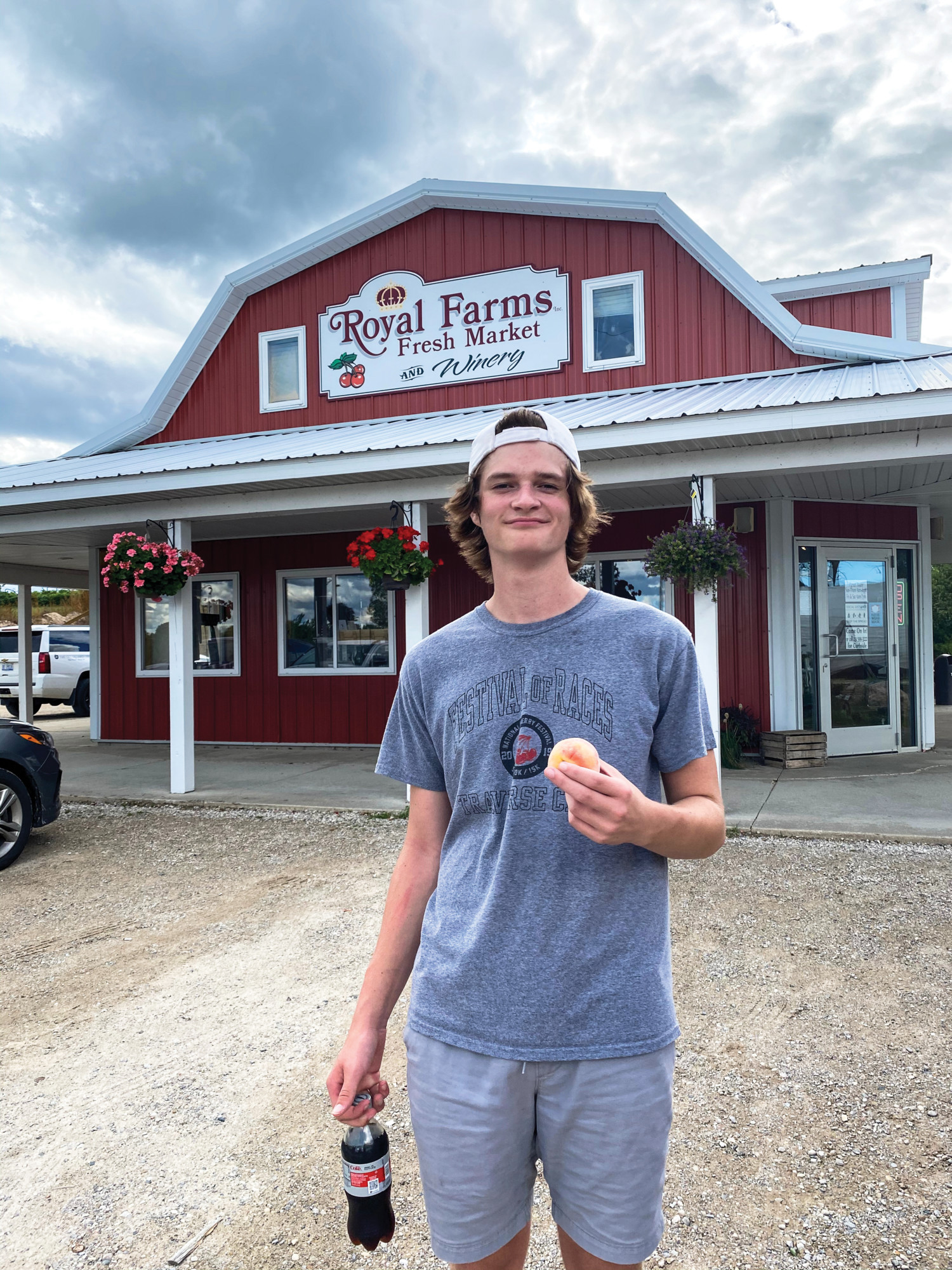 I’m looking for the grain elevator, next on the list. I’d have to be blind not to see it, but I’m looking so hard everyone else sees it first. It’s looming above the Ellsworth Farmers Exchange just inside the curve into town. I’m impressed. I get out and walk backward across the two-lane road to get a picture. The locals give me a look. I’m not exactly a tourist, having lived just 90 minutes from here all my life. But I feel a little thrill. Exploring “home” can feel just as new as anywhere else. The bonus is that I feel ownership. I told you Michigan was great!

The Farmers Exchange has been a farmer-owned cooperative since 1918, serving surrounding counties. A quick step inside, and I find everything from rakes to tires to birdseed. The guy behind the counter waves at me and goes back to talking to a man in overalls. He’s covered in dust. I feel like I’m in my grandpa’s garage. I walk out with a wave and a lightness to my step. It’s official: I’m on vacation. 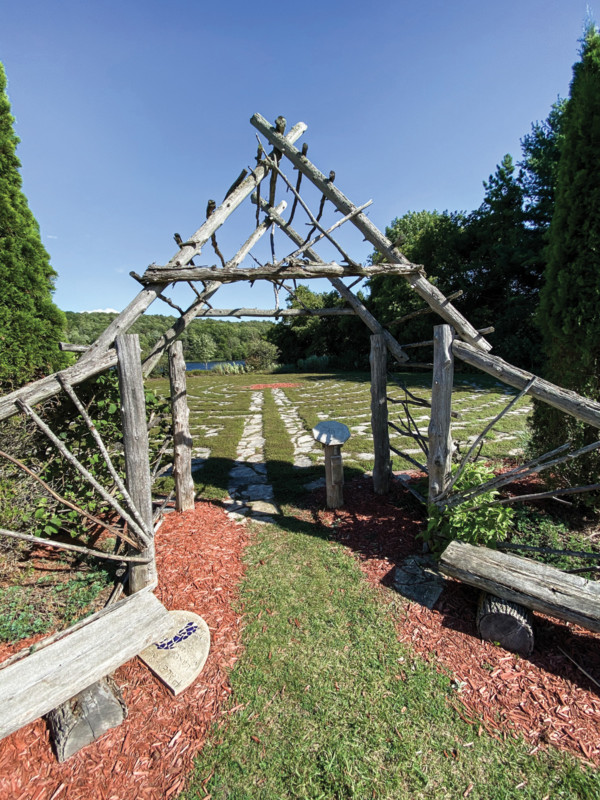 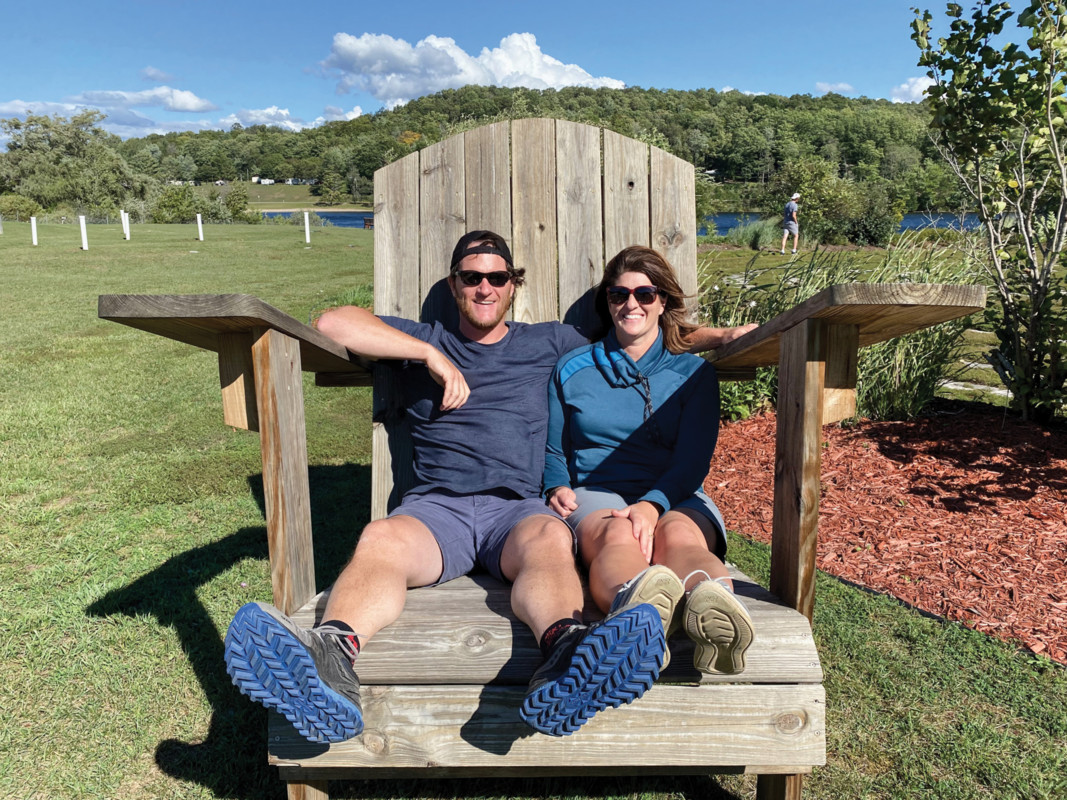 Which can mean only one thing—time for the labyrinth. It’s tucked down in the Ellsworth Community Park. I wonder, have I ever taken my grown children through a labyrinth? I had let them run wild in a small one once as children, but now—insert Mom Moment of Joy—this one we can actually do! We will share the ancient practice of quieting our minds as we walk the path together.

It starts out well, at the giant Adirondack chair at the entrance. There’s a butterfly-winged chair, too. Then all of us scatter. I’m taken by climbing into that huge chair. Tim and Nelson are, for whatever reason, wrestling in the grass. Kendall, 17, is the only one finding peace and serenity in the labyrinth.

When the Ellsworth Labyrinth Garden was unveiled in 2004, it was the largest labyrinth in Michigan at 90 feet wide. It is striking, overlooking Ellsworth Lake, one of 12 connected lakes and rivers making up Michigan’s 99-mile- long Chain of Lakes Water Trail that empties into Lake Michigan.

I make the boys pose for a picture because the sky is so blue and the chair is so big. There’s a small uprising, but I still have the burgers as leverage and they smile, laughing.

East Jordan feels like the centerpiece of this trip, because, well, that’s where the burgers are. Rolling into town, we see the Foundry Bar and Grill. It’s the promised land. The place is quiet—we are here late for lunch hour, early for dinner. We perch on tall rustic stools and look out the rolling garage doors that overlook a marina on Lake Charlevoix.

Our waitress arrives with a shirt sporting their logo: “Dammm. Good. Food.” It’s accurate. Tim gets the Cowboy Chicken—a buttermilk-marinated fried chicken breast tossed in sweet BBQ sauce, topped with crispy onions, applewood smoked bacon, cheddar cheese and housemade BBQ ranch. Nelson and I split a small pizza with his one and only favorite, cheese. Kendall orders a giant burger, and we all fight over the fries. 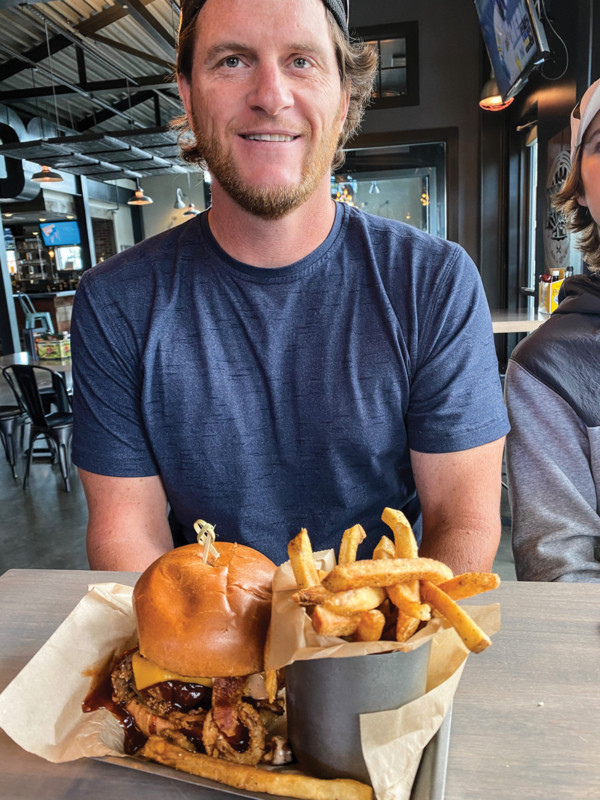 I try Cheboygan Brewing Company’s “Blood Orange Honey” beer. It’s an American-style wheat ale with the addition of wildflower honey and blood orange puree. It’s perfect for a wine gal who only drinks beer when on the hunt for local (in this case, citrus!) flavor.

Next, it’s a walk downtown. There’s an antique shop, Busy Bridge, that I beg the rest of them to go inside with me. It’s full of awesome trinkets. I purchase a jigsaw puzzle of the steam engine on display in East Jordan, photographed by Michigan native Phil Stagg. It’s only 300 pieces, and I’m certain I can wring additional bonding time out of them later as we rehash our Breezeway day.

The jigsaw puzzle inspires a trip to the No. 6 Locomotive Steam Engine on display at the Sportman’s Park. The East Jordan & Southern Railroad operated from 1901–1961 and the engine is a historic landmark. While we get a pic, a fisherman walks by carrying a bow and a long arrow with a barbed tip. Tim gets the scoop: The guy bowfishes the Jordan River, which runs next to town. His catch? Usually carp. We’ve never seen a real, live bowfisherman. I should have had it on my scavenger list. 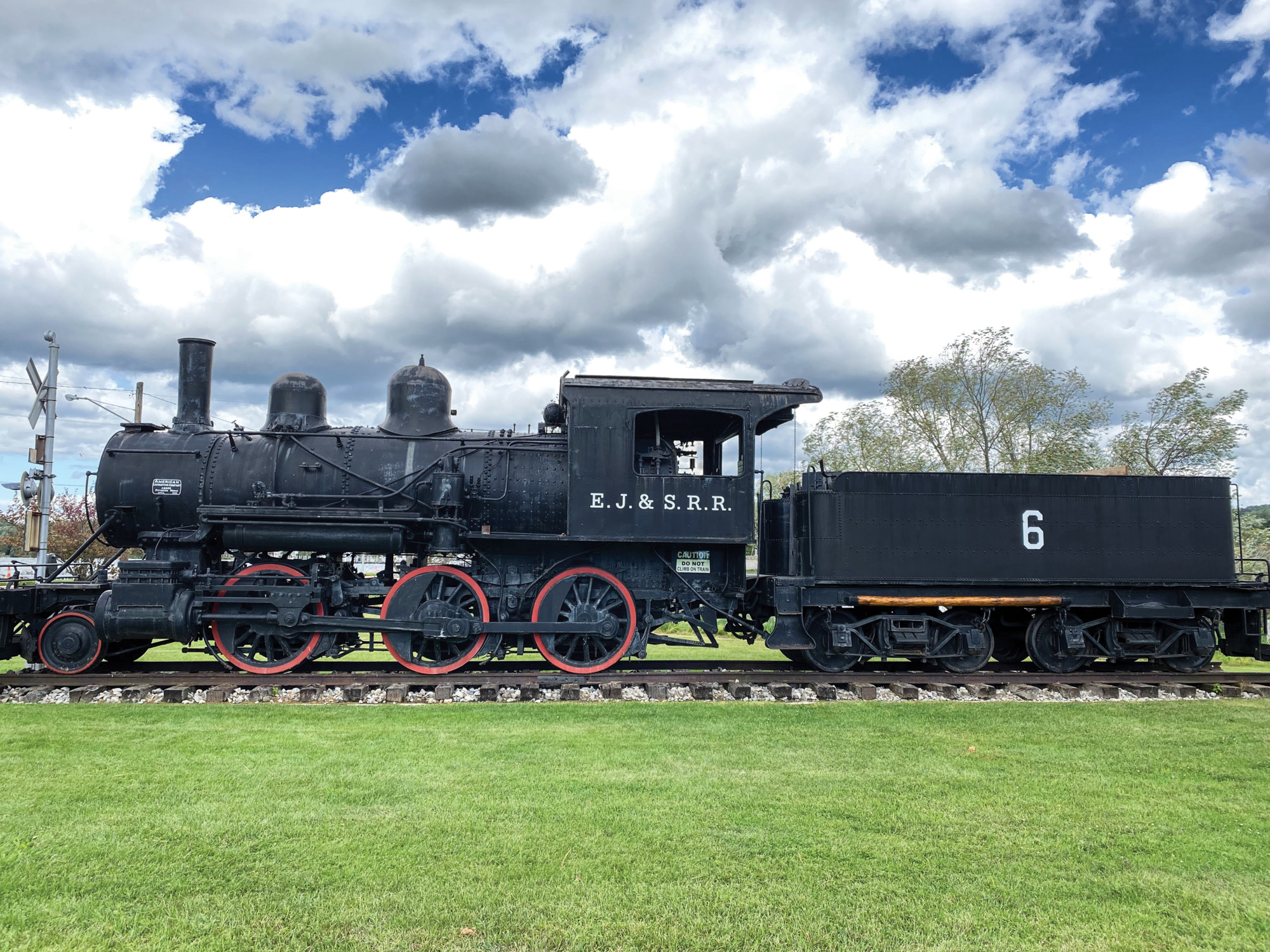 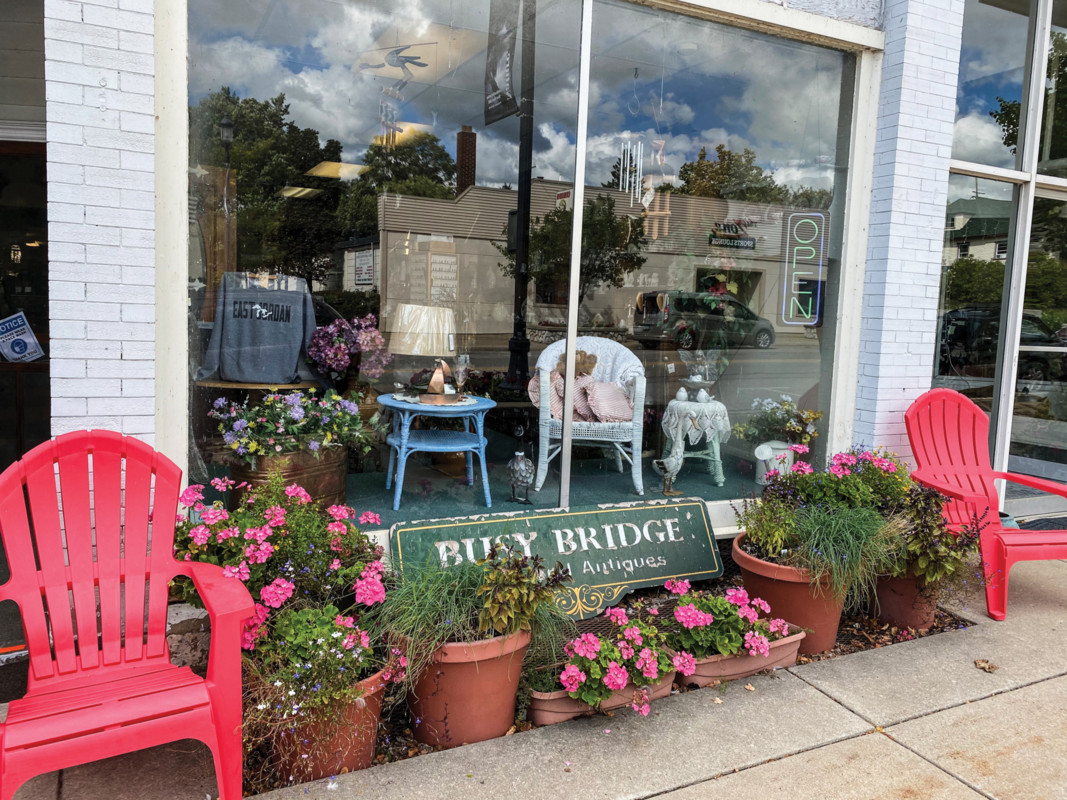 This summer, watch for the new Jordan art walk in the East Jordan area. The art walk will consist of eight sculptures by Michigan artists.

The sculptures will be placed throughout the community in city parks for three years at a time and will be for sale, says Mary Faculak, president of the East Jordan Area Chamber of Commerce. “the art walk will always be evolving and be a beautiful way to showcase artists in the area,” she says.

The call to artists is underway and a Jury will select the first eight sculptures that will be placed on display by June 1, 2021. For more information, contact the East Jordan Area Chamber of Commerce at [email protected]

Boyne Falls is next—and this place is a day in itself. I make a list of things I want to come back to: Boyne Mountain Resort, which includes lodging … and Avalanche Bay Indoor Water Park. Also, we will come back for a day exploring the Raven Hill Discovery Center (boardwalks and nature center!).

At last, we head back to Atwood. The corn maze awaits at Royal Farms. There’s a prize if we reach all eight spots in the maze in under 30 minutes. We tackle it. By “we,” I mean Kendall ditches us all and gets it hammered out, running all over the maze, sweating and sprinting. The rest of us fumble around and find two. We all meet back at the farm market and Kend- all gets his prize: a fresh, juicy peach. We buy a bottle of Cheeky Cherry Wine, apples and donuts to finish the day.

As we head home, it’s almost 6 p.m. and I’m happy. We spent an entire day together and had only one dust-up over too many “groupies” (selfies of the family). We did good. I have a couple of cool souvenirs, and we “found” the drumlins. But more importantly, I have a day I will remember with my family, right here in Michigan. The day we did the Breezeway! 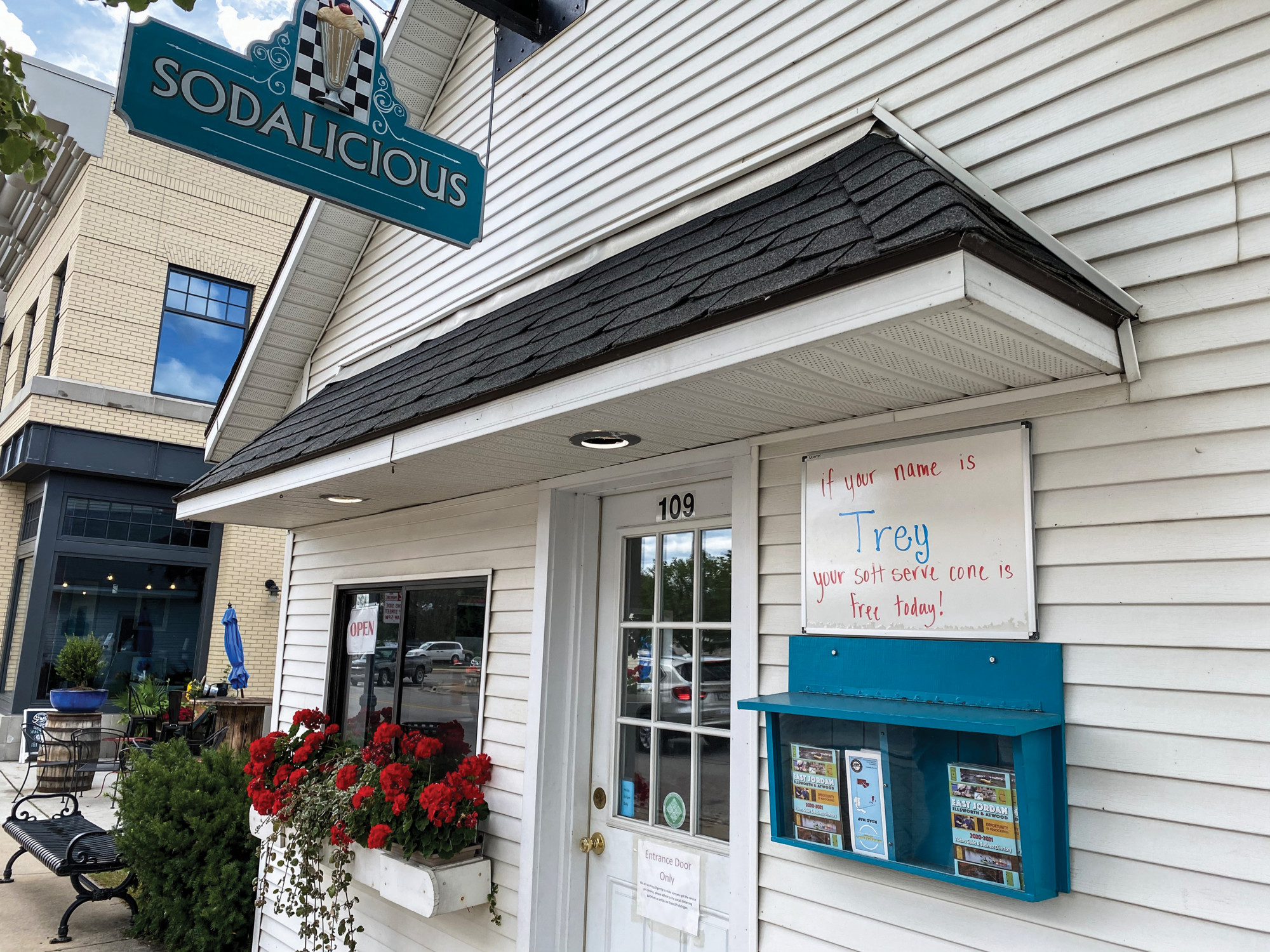 A History of the Breezeway

The Breezeway started 15 years ago when a group of like-minded people decided to piece together their quiet, little towns and give them a shared identity. The idea truly took off after their task force secured a $25,000 state grant to make an official map, mile markers and signage.

One of the task force’s first events was a cruise down C-48 through each town.“We did a Breezeway Cruise and a cookout, and that still continues to this day,” says Mary Faculak, president of the East Jordan Area Chamber of Commerce. “At first, everyone said, ‘What is the Breezeway?’ Now, residents and businesses have a sense of place and say, ‘I live on the Breezeway!” Mary says.

Annual Fall Color Cruises have been held each year since the inception of the Breezeway and are still a huge success, she adds. Boyne Mountain Resort color-tour chairlift tickets and goodie bags were handed out each Saturday of the three- weekend event beginning the last Saturday in September and con- tinuing through the first two Saturdays in October.

From Atwood to Boyne Falls, the Breezeway is a great day trip for the entire family to enjoy. Pair it with this ultimate Breezeway scavenger hunt to enjoy everything from Cheeky Cherry Wine to a chairlift at the end of the trip. Download the entire scavenger hunt and map to take on your Breezeway adventure.

Kandace Chapple is the editor and publisher of Grand Traverse Woman Magazine. Her essays have been published in Writer’s Digest, “Chicken Soup for the Soul,” Literary Mama, Motherwell and more. She loves to mountain bike on Northern Michigan trails, hike with her dog, Cookie, and spend time with her husband and two sons.

Find this article and more in the April 2021 issue of Traverse, Northern Michigan’s Magazine; or subscribe and get Traverse delivered to your door each month.