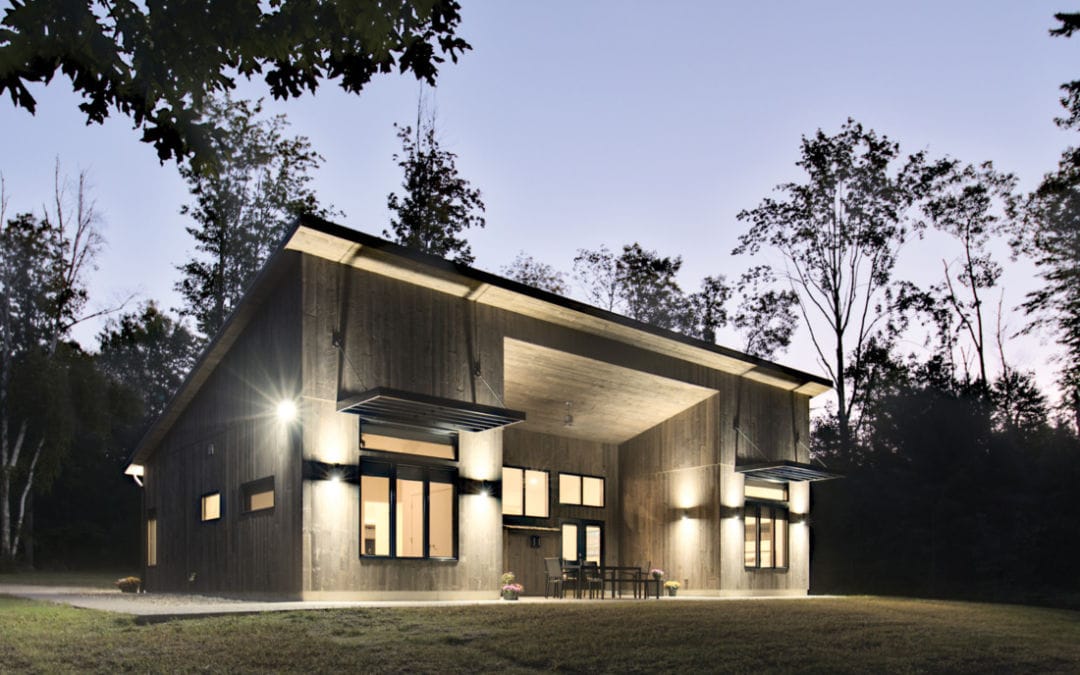 Well-designed homes don’t need to be big according to Jena Matzen and Gregg Trahey. Learn how this duo didn’t compromise on design after decades of dreaming up their modern-rustic Betsie River cabin.

Featured in the April issue of Northern Home & Cottage in Traverse Magazine.

Finding their piece of up North took husband-and-wife Jena Matzen and Gregg Trahey decades. While they make their home in North Carolina, Gregg has summered in Northern Michigan his entire life—and after he met and married Jena, she joined him. In the beginning, the couple dreamed of Lake Michigan property, but that always seemed a bit out of reach. Nevertheless, they never stopped searching for their piece of the North, trying out rental properties in various locations on their vacations. For several summers, the couple rented a cabin on Green Lake in Interlochen, near the headwaters of the Betsie River—a beautiful river that they enjoyed canoeing.

Then one day in 2018, while they were at home in North Carolina, 12 acres on the Betsie River popped up for sale on Zillow. They could hardly believe their eyes. They recognized the property in the listing—they’d canoed past it. Unable to reach the listing Realtor, they reached out to Laurie Bouwman of Bouwman Realty Group in Interlochen “She jumped on it—called us back within the hour and got the ball rolling,” Jena says. With Bouwman’s help, the couple purchased the land in September of 2018. 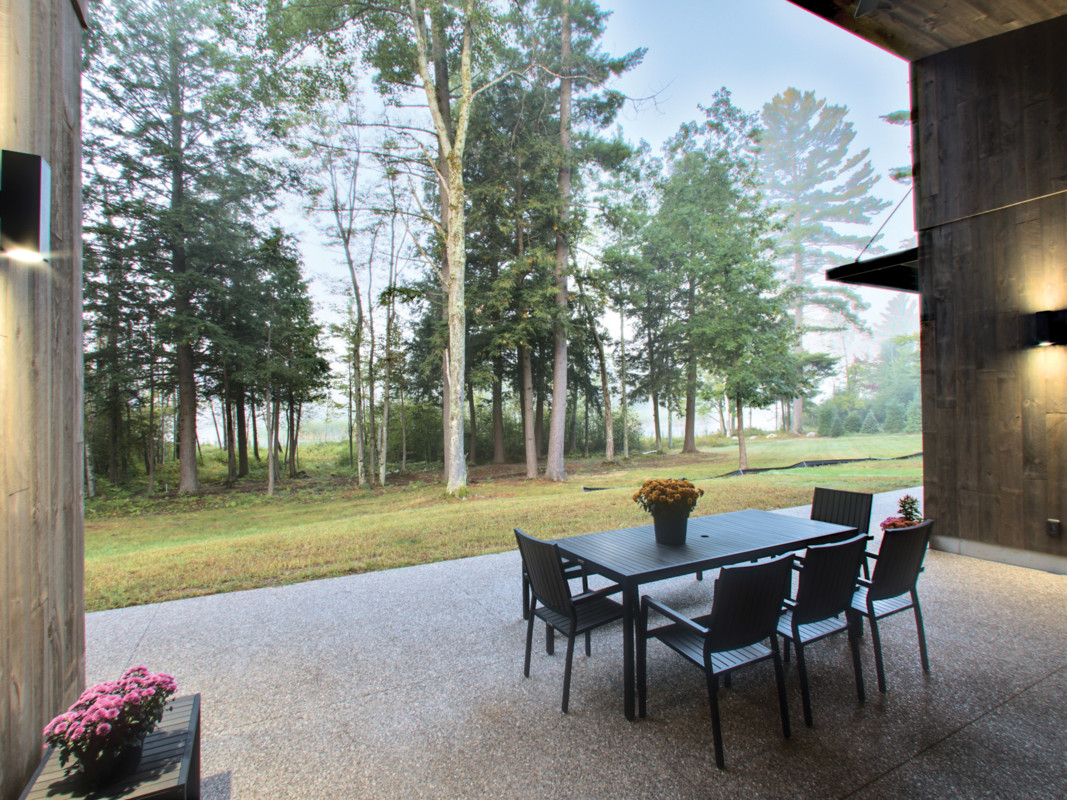 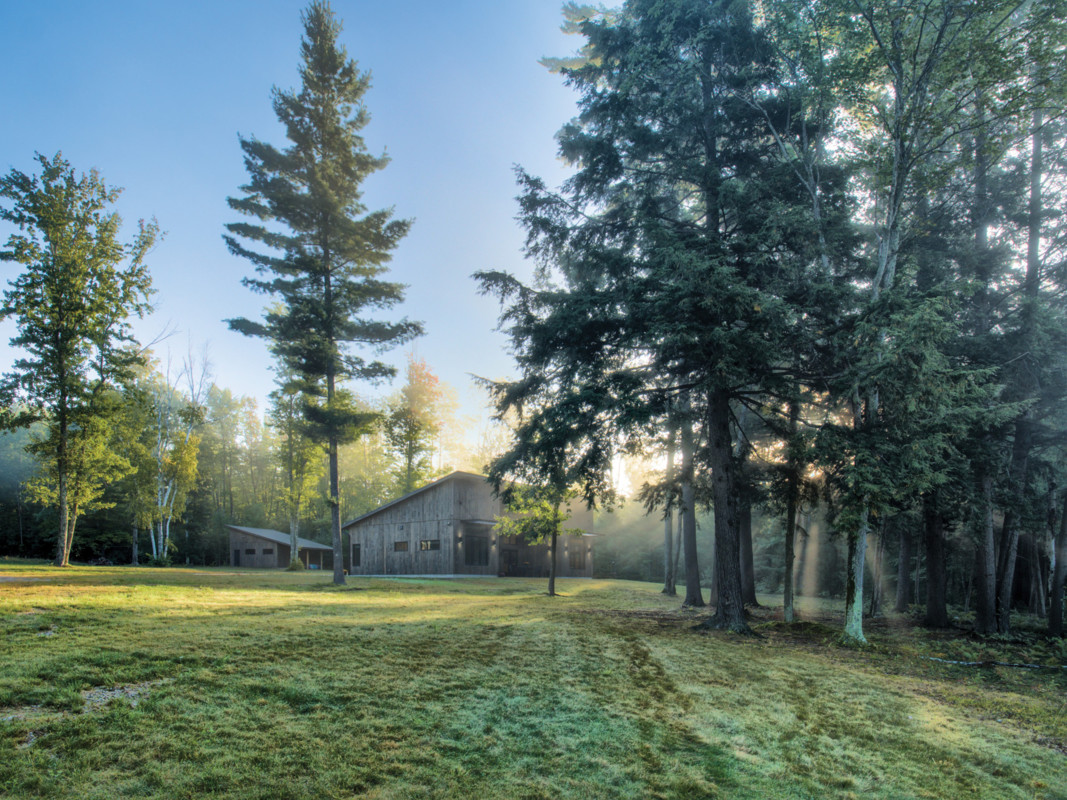 Their search for a contractor went much the same way. The first contractor they met with basically turned them down after they told him they didn’t want a big house—just a well-designed house. Then they interviewed Colin Bushong of CMB Construction, whom Gregg had found on the internet. “When we met with him the stars aligned; we just adore him,” Jena says. “Colin is the king of collaboration. I had a total vision and at every turn Colin and his team helped me create that vision.” 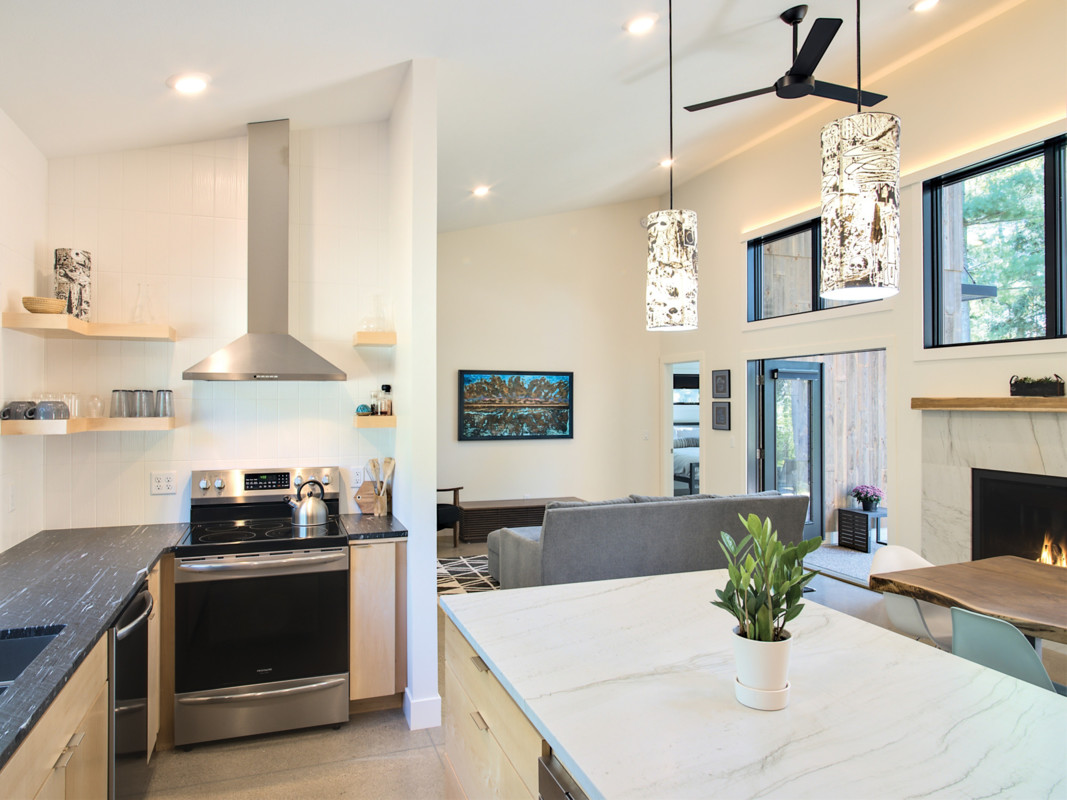 The couple began the design process by giving Bushong plans they found on the internet that had many of the elements they were looking for. Bushong then worked with Jen Markey of Thomas Building Design to refine the plans for the couple. The basic floor plan is a U-shape with a great room facing the river. A covered patio and the high riverside ceilings associated with the monoplane roof allows the 1,376-square-foot home to live much larger than it is.

Jena’s precise vision for her small but well-designed house included a modern-rustic aesthetic—describing her tastes as “Champagne on a beer budget.” At all stages of the project, she credits Bushong and his team, including interior consultant Mary Kynkor-Bird, with figuring out a way to achieve the home style she wanted while sticking to the couple’s budget. When Jena wanted a cement master bath sink but found it was too pricey, for example, Bushong suggested he build a custom vanity with a quartz top. She loves it. For granite kitchen countertops, he sent Jena and Gregg to Cadillac Cut Stone to look through remnants where they found a pattern they are enamored with. To give the home a high-end, custom touch, Bushong purchased a teak butcher block online and had his carpenters use it to build kitchen shelving, a fireplace mantel and that stunning, grain-matched master bathroom vanity. Beyond the aesthetics that the teak brings to the home, all parties involved love the fact that the butcher block is manufactured from scrap wood, so it’s essentially a green product. 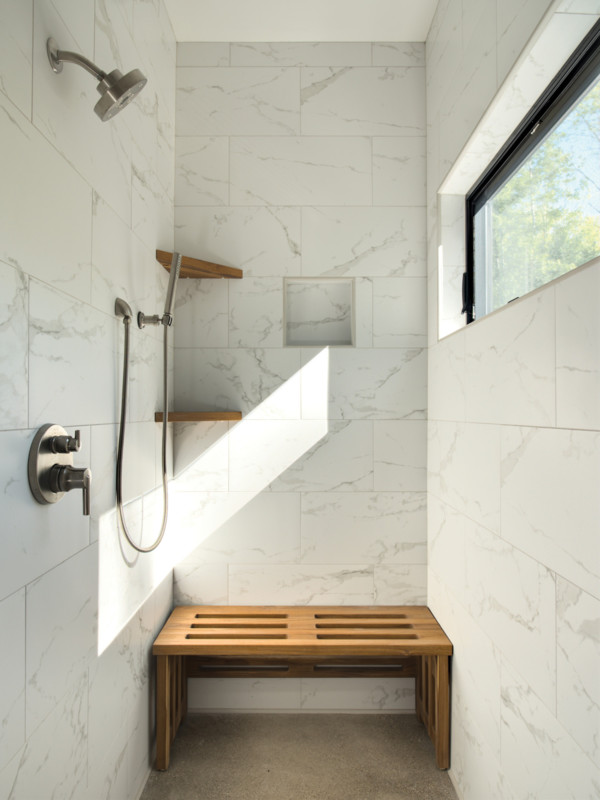 Because of Bushong’s resourcefulness, the couple was able to splurge on luxuries including a polished concrete floor, a curbless and doorless shower, hidden LED trim lighting in the great room that adds drama and steel louvers (fabricated by Wheelock & Sons Welding) on the exterior that offer shade from direct sun while giving the home an industrial vibe.

But Bushong’s greatest sleight of hand for the home was probably the exterior cladding. 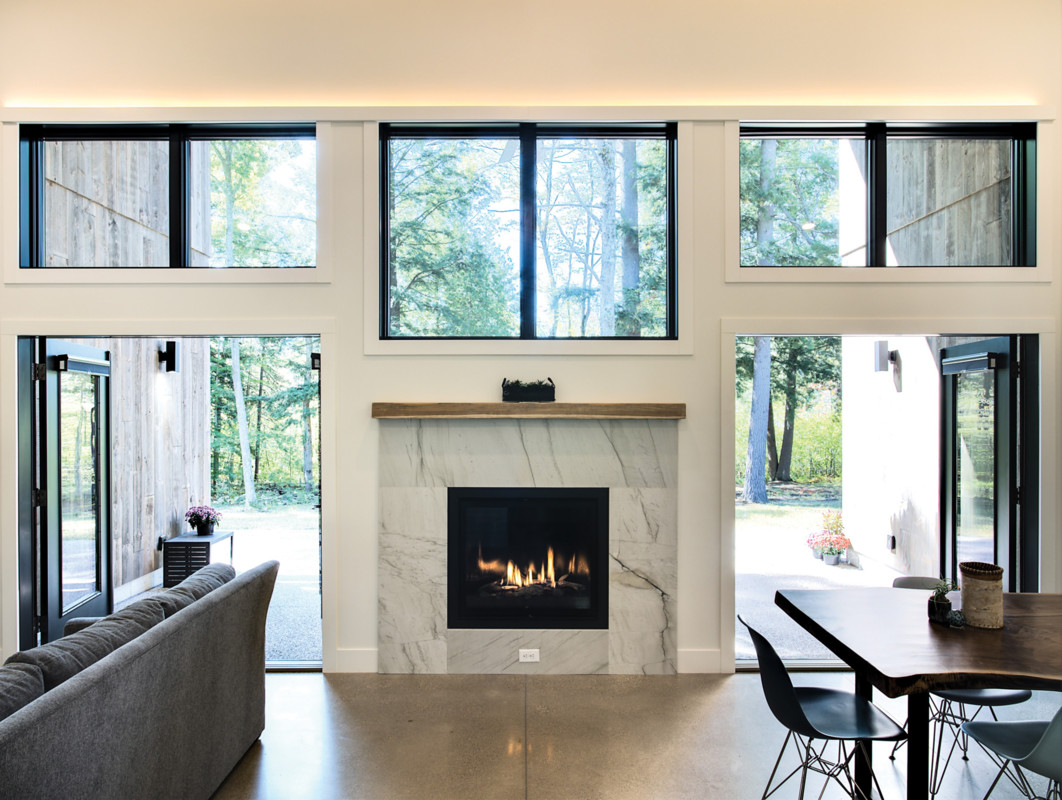 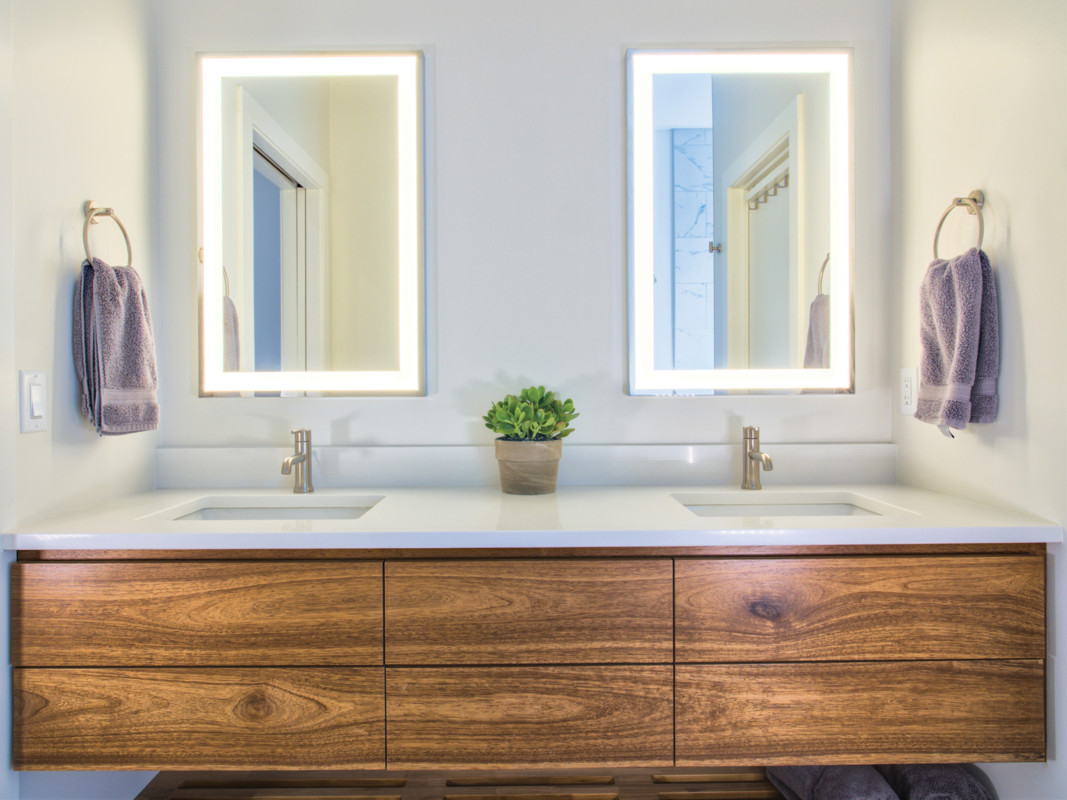 “We really wanted to honor the property and build something that was going to blend in and not be obnoxious,” Jena says. “A lot of people float the Betsie and I didn’t want it to stand out more than it had to.” While weathered barnwood siding was the couple’s first choice, they knew it was beyond their budget. Initially, Bushong worked on several board-and-batten concepts to try to recreate the barnwood look, but nothing seemed quite right. Then he discovered WoodHaven Log & Lumber, based in Mio. The company manufactures a wood siding that mimics weathered barnwood. “Colin said, ‘I think this will work,’ and that’s how we ended up with a house that blends in and has drama to it,” Jena says.

Jena and Gregg aren’t the only ones who love their new home. The house won five out of six Judge’s Awards, as well as the People’s Choice Award, on the 2020 Home Builders Association of Grand Traverse Home Tour.

Find this and more Northern Home & Cottage articles in the April 2021 issue of Traverse, Northern Michigan’s Magazine; or subscribe and get Traverse delivered to your door each month.