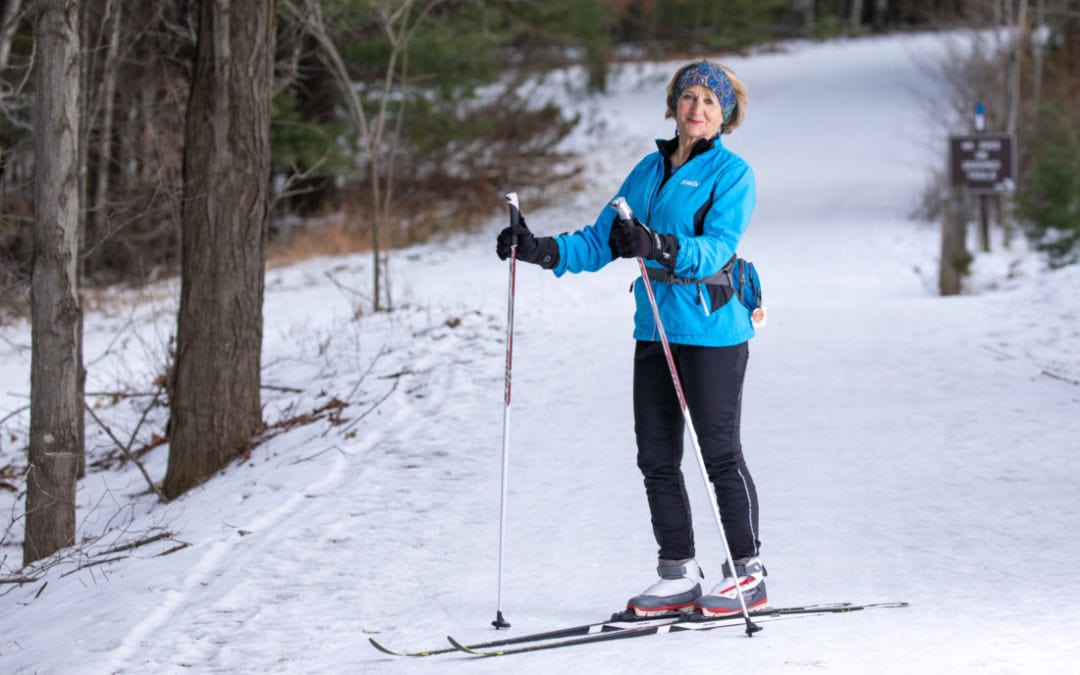 Individually, Baby Boomers are redefining what retirement looks like for them. For Fran Alfs, retiring in Northern Michigan meant meeting new people, trying new things and nurturing her love of outdoor recreation (and winning races!) Here’s Fran’s path to her own retirement and tips to making your own.

When Fran Alfs moved to Traverse City in 2008, she didn’t have many friends to call on locally. So, she set about meeting new people with joy and determination. She started a journal with ideas on how to meet people, she joined groups, she printed up 250 flyers and put one in every mailbox in her subdivision: Would anyone like to get together for a walk or be in a book club?

Featured in Inspired Life: Living Your Best Life at 55+. Check it out for free!

It was months later before a neighbor found the flyer blown into the shrubs, and Fran got a call. More calls followed and, before long, “Wine, Women and Books” was underway.

Fran also went to Horizon Books and learned that the “Don’t Bother Me I’m Reading” Book Club was meeting that very night at Amical. She walked in, introduced herself and met people like fifth-generation cherry farmers and local business owners.

“Meeting all these people when I first moved here gave me a historical perspective into this region, my new home,” she says. That was 13 years ago. Since then, you might say, Fran has made a few friends.

At age 69, her social life sounds more active than most 29-year-olds. On the day we are chatting, she is off to a morning ski with the “Retired Not Tired” ski group at Crystal Mountain in Thompsonville, then heading off at noon to lead a class for SheSkis at Hickory Hills in Traverse City.

“My friends say I’m the poster child for how to retire actively!” she says with a laugh.

Fran moved here after a 34-year teaching career in Southfield, Michigan. After arriving in Traverse City with her husband, Ed, she worked another two years as a part-time special education consultant for TBAISD. She then “retired” and worked at the Michigan Artists Gallery for Sue Ann Round, and later for Michigan Works as a literacy specialist, before finally retiring from paid work and spending more time volunteering and pursuing her love of the outdoors.

All in all, Fran has found the beauty of working and dabbling in a number of ventures can provide a rich stew of possibilities in retirement.

Fran is a part of a tribe in the area that is centered mostly around the beauty of the outdoors. She is a member of many groups including SheSkis, SheBikes, The Sisterhood, The Vasa Ski Club, Cherry Capital Cycling Club and more—all based on the love of movement and being outdoors. She now finds herself training 12–15 hours a week in many different sports, depending on the season.

The other important world for Fran has been being a docent at The Dennos Museum for 13 years. This community of docents—made up of people who enjoy art, are willing to go through training and love working with children—has been a mainstay for Fran. When the COVID-19 shutdown began, Fran started painting every single day and sharing her paintings online with an artist, friend and mentor, Nancy Crisp, who she knew from volunteering at The Dennos. They would send a daily painting, back and forth. The mentoring online has helped Fran develop an area of her life that had not been realized and further developed a friendship with a kindred soul.

“I feel so lucky to have friends made outdoors and in,” she says. “I tried new things until I found my tribe. I now have three to four people I can call on any day, at the spur of the moment, to just get outside with. Conversely, I have friends I can Zoom for book clubs or share art with.”

Fran offers this advice for those looking to build an active and varied friend circle later in life: Don’t be shy. When she knew no one, she tried many groups and activities, choosing whatever she wanted to try next without hesitation. “Living up here is like being a kid in a candy shop,” she says. “You can try things you’ve never done before.”

Fran also set fitness goals that pushed her to find people who would help her meet them. “You don’t have to commit to a group forever,” she says, “but it’s good to have a goal that gets you out there and connected to people.”

The very first goal Fran had after moving to Traverse City was to swim across the bay. She joined the Northcoast Masters Swimming club, where she met Kathy Coffin-Sheard, a coach who directs teams at the YMCA. Every summer, Fran still gets a group together to cross the bay. Fran’s second big goal after moving here was to run the Bayshore Marathon at age 60.

“I’d never done a marathon, but Running Fit (a local running store) had a group and offered a six-month program,” she says. Allison Gross, a coach for TCAPS cross-country teams and Running Fit employee, trained her from point zero in running to completing the Bayshore!

Next, she wanted to try biking. She got involved with Cherry Capital Cycling Club (CCCC) and later with SheBikes, a local women’s biking group.

“I hadn’t ridden a bike in many years because I was always working,” says Fran. “But I met Linda Deneen at the Subway parking lot with the CCCC, and we rode up to Suttons Bay, which is 15 miles. I was sure I could not do it. Linda encouraged me, and now I can go on 40- to 60-mile bike tours.”

From there, Fran met more and more outdoorsy, active people—finding many connected together, like a “Venn diagram” she says, in a place as “small” as Traverse City.

“You join a group, and you might know a couple of them peripherally,” she says. “But then, you go, and you get to know them. It becomes a real connection to your community.”

Also, she admits—sometimes friendships come from competition.“You meet someone who teaches you about a new sport, and it’s contagious,” says Fran. “I tell friends, ‘My goal is to beat you someday!’ We laugh about it!

Fran says the motivation also comes from things as pedestrian as swag from completing a race or a new hiking patch for walking 100 miles on the North Country Trail.

“But, seriously,” she says with a smile, “the gift of sharing talents and passions is such a part of the culture up here that it is refreshing.”And the best part, she says, is that you can hit the podium when you’re older, when there are not as many people your age competing. When Fran did the Iceman Cometh Challenge mountain bike race seven years ago, it was a challenge to get to the finish line.

“Afterward, my husband was pushing my bike, I was about to puke and someone says, ‘Hey! You got second place in your age group!’” recalls Fran. “I was like, ‘What!?’ I got $35 or something!”

Her enthusiasm is infectious to anyone who is thinking about getting their old bike out of the garage this spring. Fran’s advice? Give it a go.

“Follow your activity … and if you don’t like it, ditch it,” she says. “That’s the beauty of it—we are of the age to pick and choose. It’s okay to realize, ‘no, that’s not my group’ or decide that they don’t fit with who you are.”

A lot has changed since Fran arrived in Traverse City, but her advice to newcomers and new retirees comes back to those 250 flyers she first put out 13 years ago.

“All it takes is one person to put it out there, through a friend, a flyer, a Facebook post,” she says. “People are hungry for making pods in the community right now. Do it! There’s no bad weather—just wear the right clothes.”