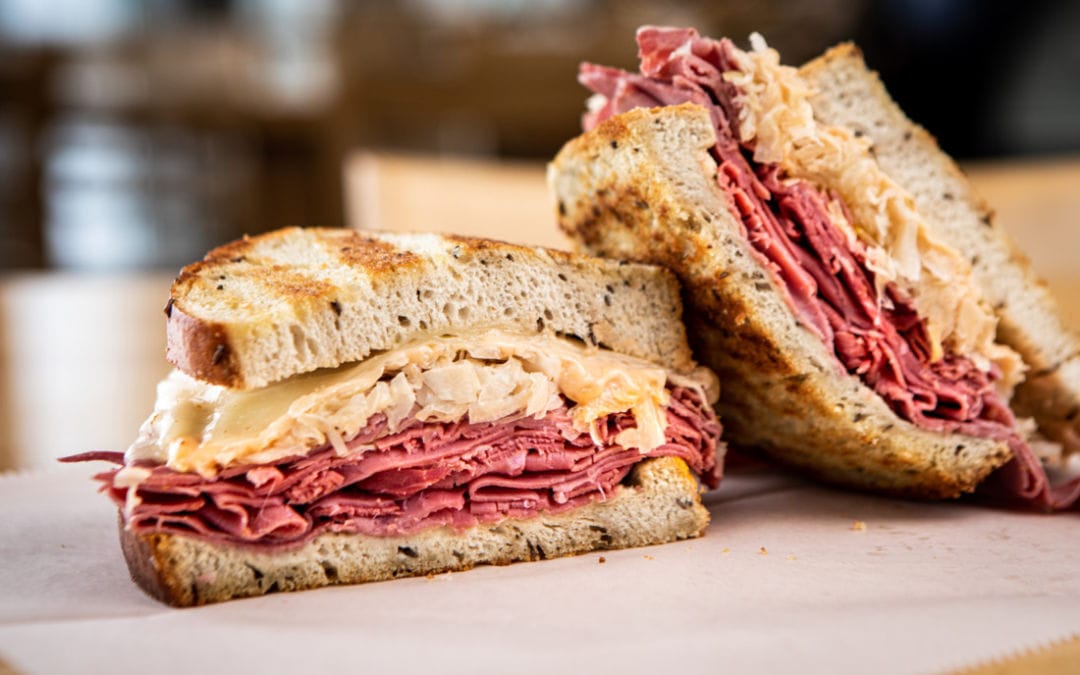 Itching to get real Irish this St. Patrick’s Day? Corned beef from Northern Michigan’s Louie’s Meats in Traverse City is well worth its salt.

Featured in the March 2021 annual food and drink issue of Traverse, Northern Michigan’s Magazine. Check it out!

Trevor Alpers, president of Louie’s Meats, is adamant that good corned beef starts with top-of-the-line briskets. “A lot of people say it doesn’t make a ton of difference, but it makes a huge difference,” says Trevor. “For a long time, corned beef was just a salted piece of meat. Ours is full of flavor.”

Each week, 10,000–20,000 pounds of Louie’s popular O’Brien Corned Beef are delivered to delis, restaurants and stores across the state, many in Detroit, where the Traverse City company has a devoted customer base. In addition to corned beef, Louie’s produces pastrami, ground beef, hot dogs, sausage and bacon.

In the North, Cormack’s Deli in Petoskey has been a longtime customer. “Louie’s Meats is a great Northern Michigan family business that we have been purchasing from for years,” says deli owner Brad Cormack. The deli’s massive menu of 50+ sandwiches features several with Louie’s corned beef, including a classic Reuben with a generous stack of meat, sauerkraut, Swiss cheese and Thousand Island dressing between grilled slices of freshly baked rye bread. Further down the lineup, the “John Holec” keeps it simple—a half-pound of corned beef and mustard—and “The Brooklyn” swaps in cream cheese and a French roll. Go wild.

Mid-January marks the start of the busy season at Louie’s, as the team prepares for a St. Patrick’s Day surge of corned beef orders. “When my grandpa Louie started the business in 1962, he wasn’t making corned beef,” Trevor says. “Years later in 1980, a Polish man showed up one day and wanted to work. He shared his recipes and connected us with retailers in Detroit, and we now have a long list of loyal customers. It’s pretty stressful, but afterward, we’re always thankful and feel very blessed.”

Cooking Tip: If you’re preparing a corned beef feast for St. Patrick’s Day, Trevor recommends roasting it. “I put it in a roaster and let it cook at 275 for 10–12 hours with cabbage, carrots and potatoes. When you boil it, it’s not nearly as salty.”

Find this and more food and drink articles in the March 2021 annual food issue of Traverse, Northern Michigan’s Magazine below; or subscribe and get Traverse delivered to your door each month.