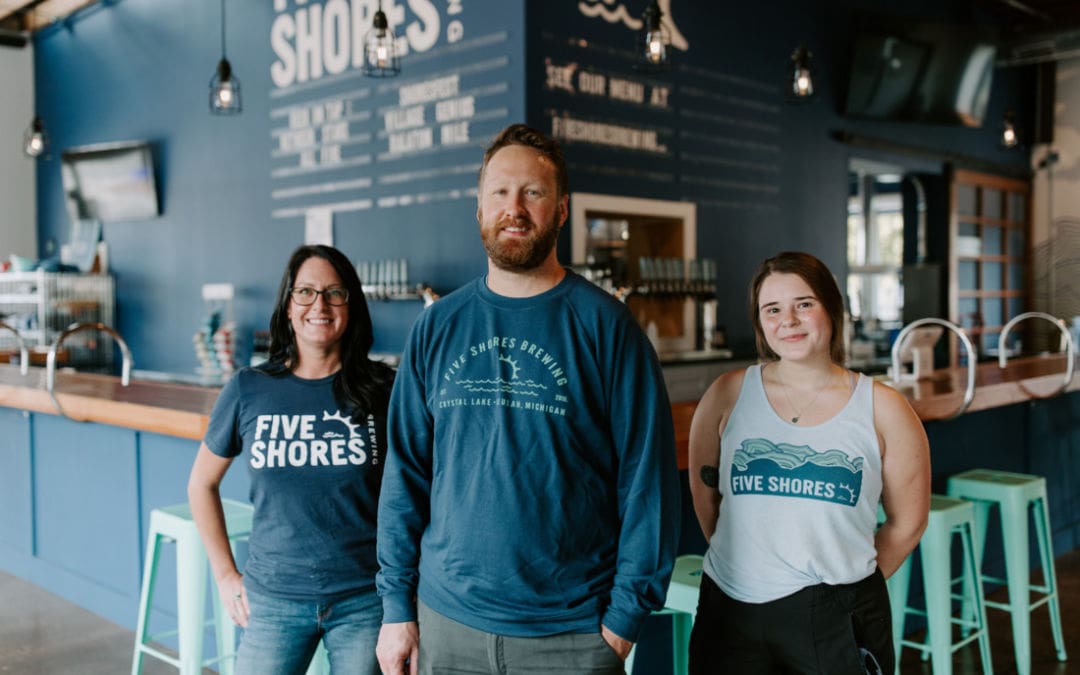 Featured in the March 2021 issue of Traverse, Northern Michigan’s Magazine. Check it out! 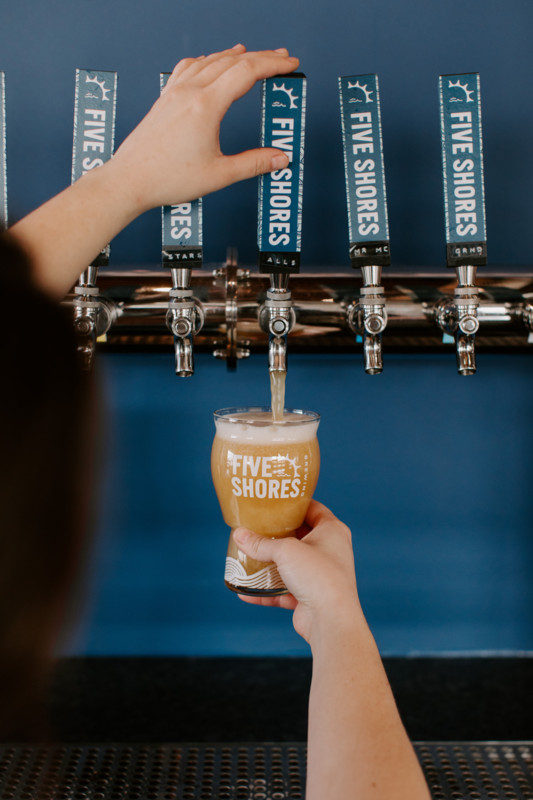 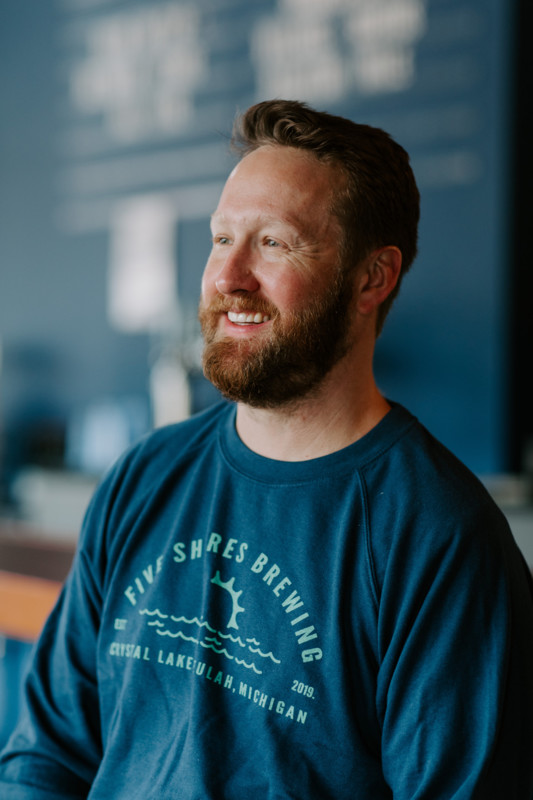 Hiding out on Crystal Lake’s eastern end, in the heart of Benzie County, the village of Beulah is a deeply Northern Michigan town, in a deeply Northern Michigan county. The classic downtown’s sustained look benefits from just enough of a buffered bypass from the main road (U.S. 31). And like all towns, Beulah has stories to tell, most famously, an attempt to build a canal that caused the unintentional drainage of Crystal Lake in the late 1800s. Flat, treeless land was exposed in the process, perfect for a railroad, and a village grew upon land once a part of the lake.

The stories expanded over the decades to include farmers who sought the fertile soil, merchants who set up shop and vacationers who came in search of fresh air and cool waters. Through it all, the town has stayed small, with charming shops and creative entrepreneurs. And now, the story of Beulah includes that of award-winning brewmaster Oliver Roberts, his business partner Matt Demorest and Five Shores Brewing. 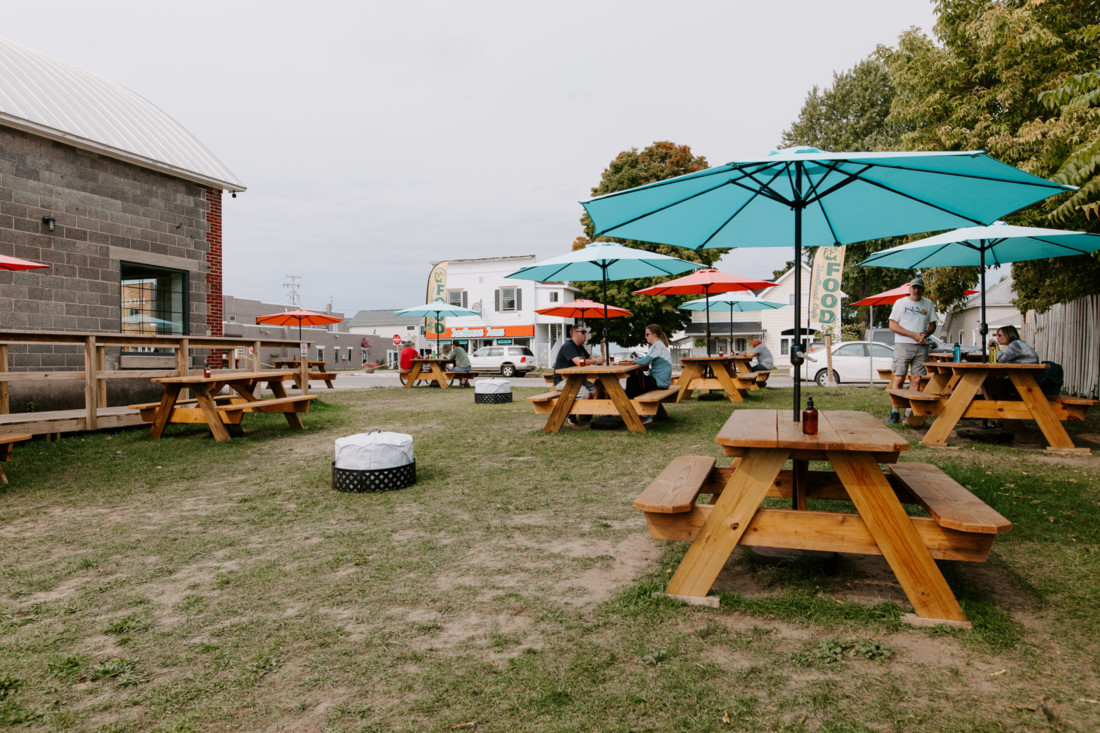 For Roberts and Demorest, it’s all about getting the story to the people. Everything is intentional at Five Shores, and their mission is to do more than sell great beer; it’s also to provide a community center for Beulah, where people can come together, enjoy and support each other, and share stories of their own.

Sitting at the long, L-shaped bar inside Five Shores Brewing, the decidedly coastal vibe at first seems out of place; Beulah is inland from the big waters of Lake Michigan. However, people stopping in are often coming to and from the large Lake Michigan beaches in nearby Frankfort, Arcadia to the south, or Empire to the north. Plus, the waves of Crystal Lake, Michigan’s ninth-largest inland lake, can be seen lapping onshore just across the street. Through the garage door that slides up for a more open-air feel at the bar, you’re just waiting for someone carrying a SUP board to saunter in, tracking sand onto the polished concrete floors. The vibe starts to make perfect sense.

Everything is Intentional at Five Shores, and their mission is to do more than sell great beer. 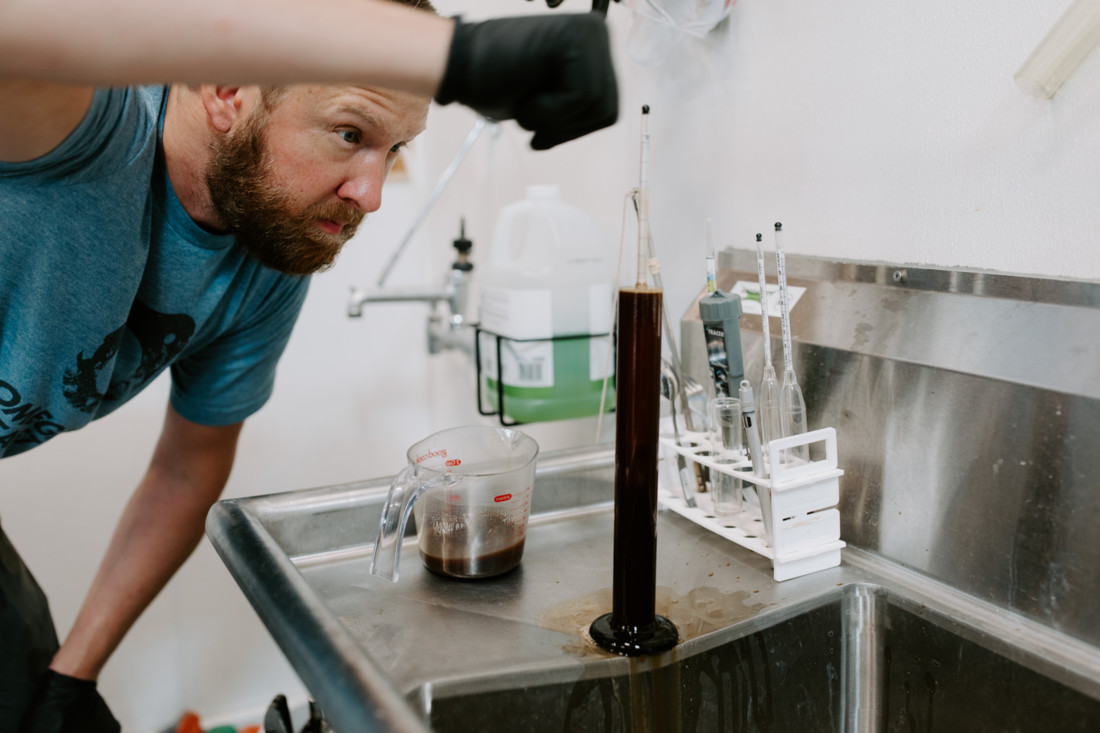 The space breathes easily in a renovated, 1950s Quonset-style building, with tall ceilings and exposed rafters reaching up to the arched roof, a signature of the Quonset. Outside, you can enjoy a drink on the side deck, out on the large lawn set with picnic tables or at a table on the sidewalk in front. There’s plenty of room to settle down and sample the eclectic beer selection, or indulge in shareable eats. Five Shores also has a nice selection of locally produced ciders, wines and mead. It’s comfortable, modern and the branding is so on point it feels like the business has been around forever, despite having only opened in January 2020.

This well-established feeling didn’t happen by chance, though Roberts’ and Demorest’s first meeting was a bit random. “Five Shores began at a Michigan/Michigan State tailgate three years ago,” Roberts remembers. “I was introduced to Matt, my good friend’s brother-in-law, and we got to talking craft beer. We had a meeting a week or so later and the business that would become Five Shores Brewing was born. We really dug into what it meant to be a craft beer and brewery fan when we designed Five Shores as a space, as well as our approach to customer service and the types of beer we brew.”

The partners make for a perfect pairing. Demorest heads the operations and brand development. In 2014, he built his startup mortgage business from the ground up, and before long became a nationally recognized business leader. But, in addition to being the proud father of five, he’s a beer guy, make no mistake.

Roberts had spent a decade brewing beer for Wolverine State Brewing Co., Michigan’s first all-lager craft brewery, in Ann Arbor. While brewmaster at WSBC, he won gold, silver and bronze medals at the Great American Beer Festival, the largest beer competition in the U.S., and a bronze medal at the 2016 World Beer Cup, the world’s largest and most reputable beer competition. In addition to many local and regional awards, Roberts’ Gulo Gulo India Pale Lager was named a Top 25 Beer in the U.S. by DRAFT magazine. In short, this isn’t his first rodeo.

Seeing all the people in the beer garden in the summer, being able to be outside and feel safe about visiting a brewery, that was one of the most memorable experiences. 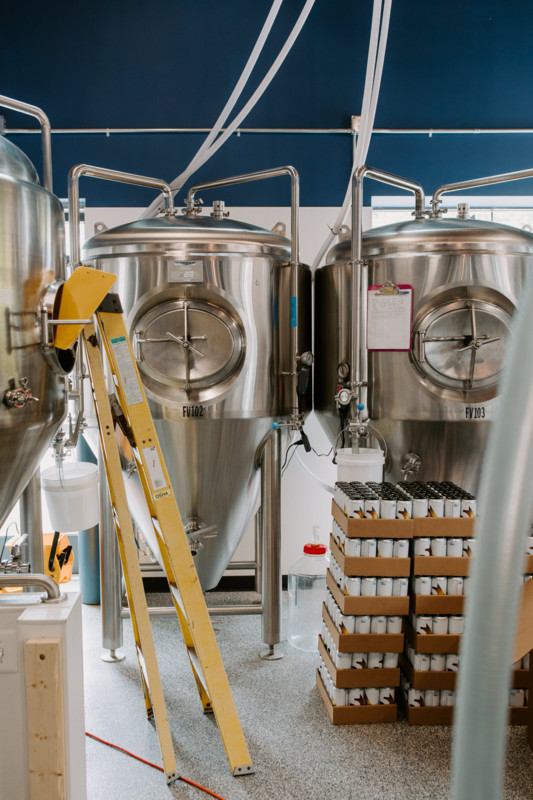 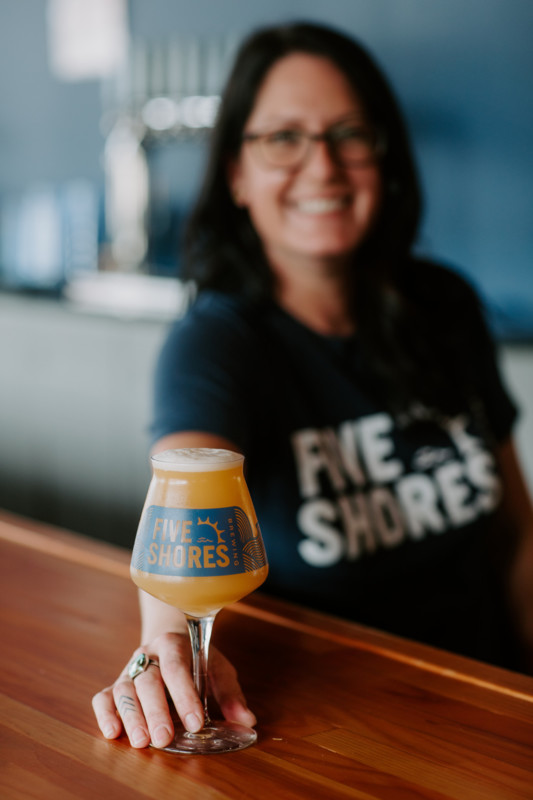 So, as you can imagine, tasting beers from an award-winning brewmaster was the top priority on my visit. Two flights, delivered in wooden accessory bin-style boxes, and one bonus glass-covered all the beers on the menu that day. The ingredients in Five Shores’ beers are sourced locally whenever possible, with some components coming from just a few miles away. “We use as many local ingredients as we can including malt from the two local malt-houses in Traverse City and the other in Empire,” Roberts says. “As well as sourcing the majority of our hops from MI Local Hops in Williamsburg.”

All the beers have short phrase-like names. Roberts says his development process can be unique because he often starts with a story or even just a name. So, rather than brew a beer, taste it and find a name, he structures the beer toward the story, or name, allowing for a more intentional process. “We do put a lot of focus on hop-forward, modern IPAs, fruited beers and lagers,” Roberts says. “The library of classic styles of beer is great to work with, but the definition of what beer is has changed so much in the past five to 10 years. We are able to really look to other breweries and taste trends from all over the food and beverage industry.”

Beyond offering an eclectic selection of beers brewed onsite, Five Shores is also a community hub—a place where people can meet and share stories.

It was more than appropriate for my tasting to start with the lager, after learning about Roberts and his all-lager brewery days with WSBC. The Local Legend, as it’s called, says a lot right off the bat about how they are approaching their business. It’s a classic American Lager, meant for those who don’t necessarily dive deep into craft beer, but just want to enjoy a familiar beer in their local pub, or grab easy drinks and food as they pass through town. The description on the menu literally says, “I don’t drink craft beer, got anything like a_____.” So instead of responding with, “No, we don’t, but try this super intense IPA,” they say, “Here’s our take on it, enjoy.” It’s a clear sign of their commitment to being a community hub and finding something for everyone. Oh yeah, and it’s good. It’s everything you want in an American Lager, and it’s now available in cans.

Another beer that struck me was the Every Five – v2, a dry-hopped IPA. It’s very smooth despite a 7.2% ABV and packs a citrusy punch without overwhelming. It’s a well-balanced IPA that’s worthy of a six-pack takeaway. The sour, Between Stars, was also impressive. As somewhat of a sour beer hater, I actually really liked it. The bartender expressed similar sourness on sours, but she also concurred on this one’s ability to surprise even the most sour-hating haters. The lactic sour notes are mild, with forward berry aromas and flavors. Hot summer days would love a Between Stars. 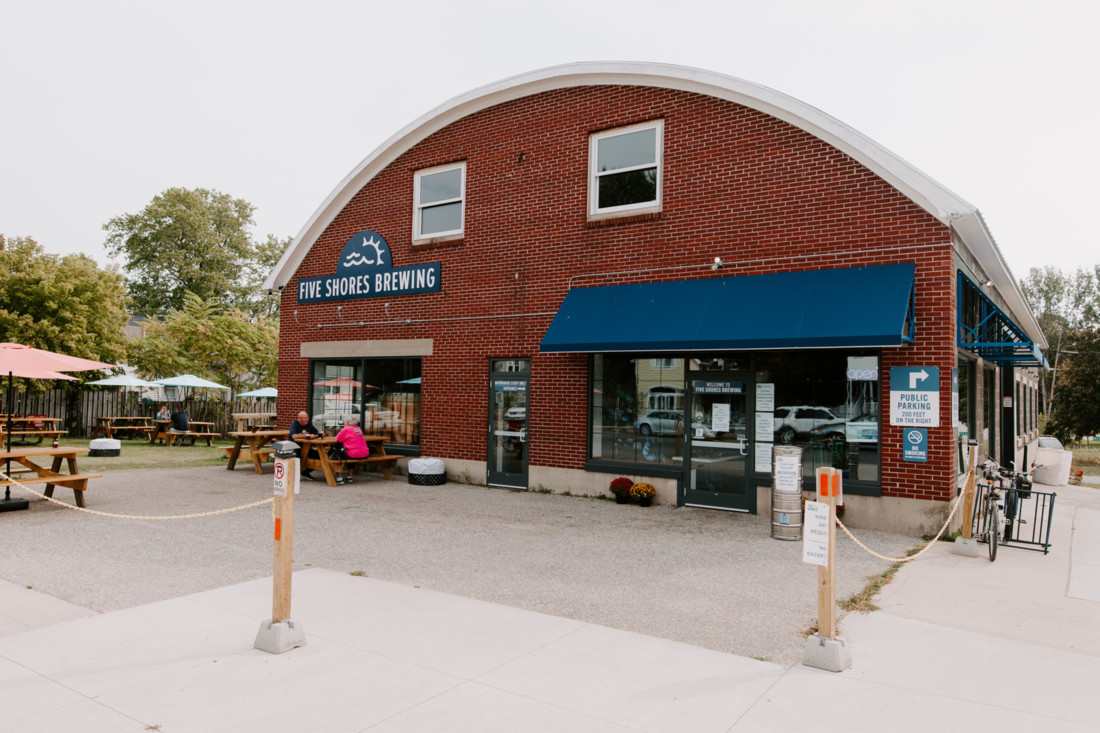 The Balaton Mile is the dark cherry ale. It’s not technically a stout but acts like a stout. What I loved was the dark cherry aspect. In Northern Michigan, cherries are synonymous with summer, but this stout-like dark cherry ale drinks for a cold and cozy happy hour, with winds off the shore and maybe even a few inches of the white stuff outside. Also, don’t forget to flip the menu for even more seasonally appropriate drinks including ciders, meads and wines.

Speaking of the menu, the food is all about togetherness, with shareables like large plates of chips and dip, mac and cheese and a killer German-style pretzel about the size of this magazine you’re reading. They also have soups for the colder days and an easy kids’ menu.

If you’re not familiar with Beulah as the tucked-away oasis that it is, you might be asking, “Ok, they know how to run a great brewery, but why did they choose Beulah?” It’s a fair question, especially coming from Ann Arbor to the slower paces of South Benzie Boulevard. It’s a much simpler answer than you might think.

“We chose Beulah for a number of reasons,” Roberts says. “A big one was the building we purchased. It had been sitting vacant for over 30 years and the consensus was that it ‘just needed to be a brewery!’ Also, Benzie County is a hidden gem. Between the other breweries, wineries and distilleries in the county, Beulah was a little gap in a great craft beverage landscape. With that opportunity, along with the building, the proximity to Crystal Lake and the incredible support from the community, we knew we had something special to build a great brewery and business on.” 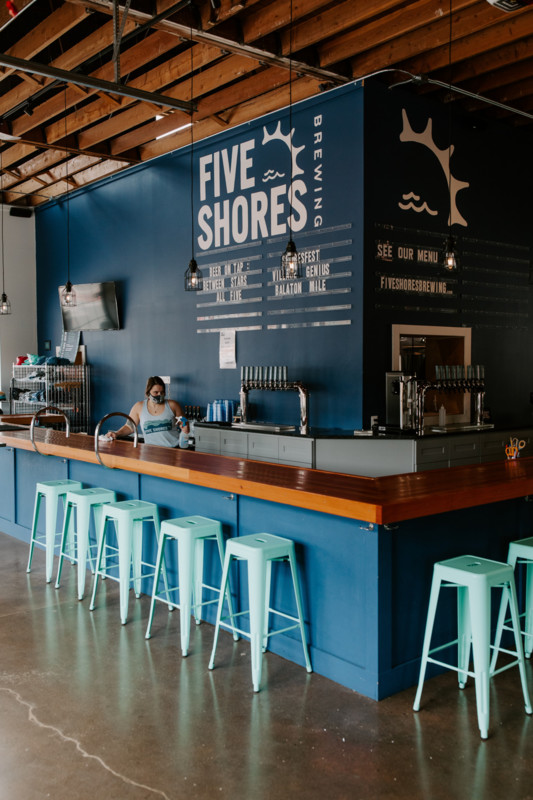 “The community in Beulah, and really all over Michigan, that knows Five Shores has been the best part of this time,” Roberts says. “Customers and fans have stuck with us through the changes and challenges we’ve faced. They’ve continued to be positive and understanding of the restrictions, and stuck with us as we reinvented our model for that summer, and leading into the end of fall, winter and spring. Seeing all the people in the beer garden in the summer, being able to be outside and feel safe about visiting a brewery, that was one of the most memorable experiences.” For the future, Five Shores is starting small with self-distribution, and they hope to do special can releases as well. Like any brewery, they’re always looking to keep things fresh, but with a focus on their roots in the community that supported them through an incredibly challenging first year. I’m sure Five Shores will continue to pay it forward to their loyal customers for many years, providing a place for locals and passersby to sit, drink and share stories.

Chris Loud is the co-founder of The Boardman Review and writes from Traverse City. Follow him @cfloud on Instagram. Jesse David Green is a photographer based in West Village Detroit. He shoots commercial, wedding and lifestyle photography. handcar.co.

Find this and more food and drink articles in the March 2021 annual food and drink issue of Traverse, Northern Michigan’s Magazine; or subscribe and get Traverse delivered to your door each month.