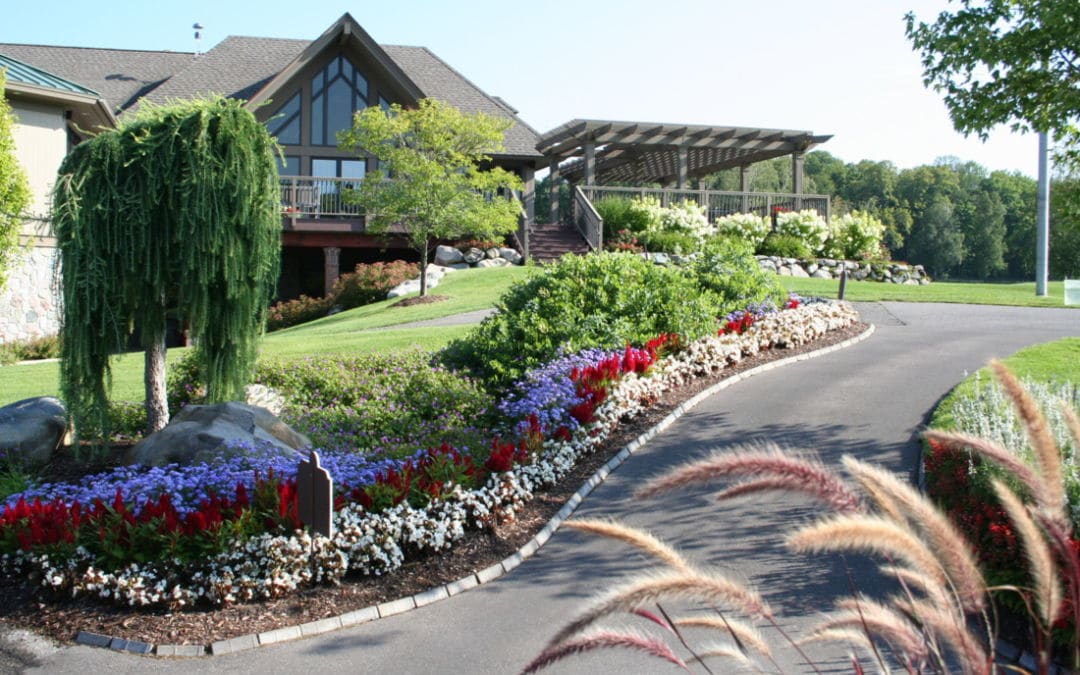 If you’re looking for Northern Michigan golf, community, activities and beauty, Birchwood Farms Golf and Country Club in Harbor Springs is the answer.

This club, long known for its championship golf courses, is opening membership to non-residents for the first time. Anyone—regardless of where they live—can enjoy some of the best amenities and scenery in Michigan’s north, as well as its thriving community of lifelong friends.

Just don’t come looking for total alone time at this complex near the famous Tunnel of Trees in Harbor Springs—unless you want it. Head to the clubhouse, comment on a euchre game that’s underway amid a lot of laughter, and you’ll likely be invited to pull up a chair. Then round the corner and find yourself asked to join a group for drinks at the social hour following an impromptu women’s golf scramble on one of the three courses.

“From the time we moved up, there were game nights, potluck dinners, wine tastings,” says Neil Loney, a board member who, this day, is lounging in the sunshine with his wife, Pat, on a patio overlooking the scenic golf course. Neil explains that they actually ‘upsized’ upon retirement to a larger five-bedroom Birchwood home because the grandchildren loved coming so much to play in the pool and the woods. “Activities give you the chance to meet other people, and everyone is very welcoming.” 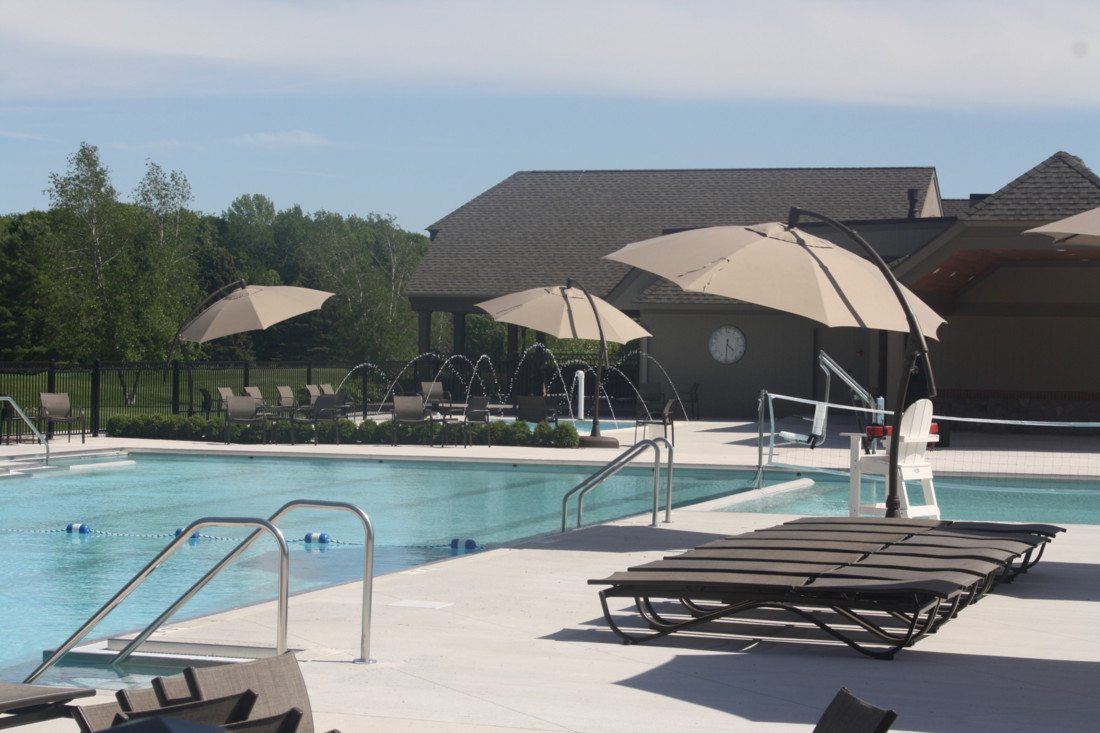 The option for beauty, activities and community is now open to people who don’t own property on-site for the first time since Birchwood opened officially in 1975 to an 8 ½ page spread in Town & Country magazine billing it as the “riviera of the Midwest resort area.”

The new general membership option offers all club amenities including golf. This club membership allows for unlimited play on three courses designed by Jerry Matthews, notable not just for design and dramatic elevation changes but also for the way the club has embraced the “tee it forward initiative” first championed by Jack Nicklaus. Each hole has eight tees, allowing players to select the one that best fits their skill level at the time.

“If you discover Birchwood, you will fall in love with Birchwood. That I can almost guarantee,” he says. “The relationships, the camaraderie, the friendships in the club are absolutely unmatched. It’s an extraordinarily safe, tranquil and gorgeous club.” 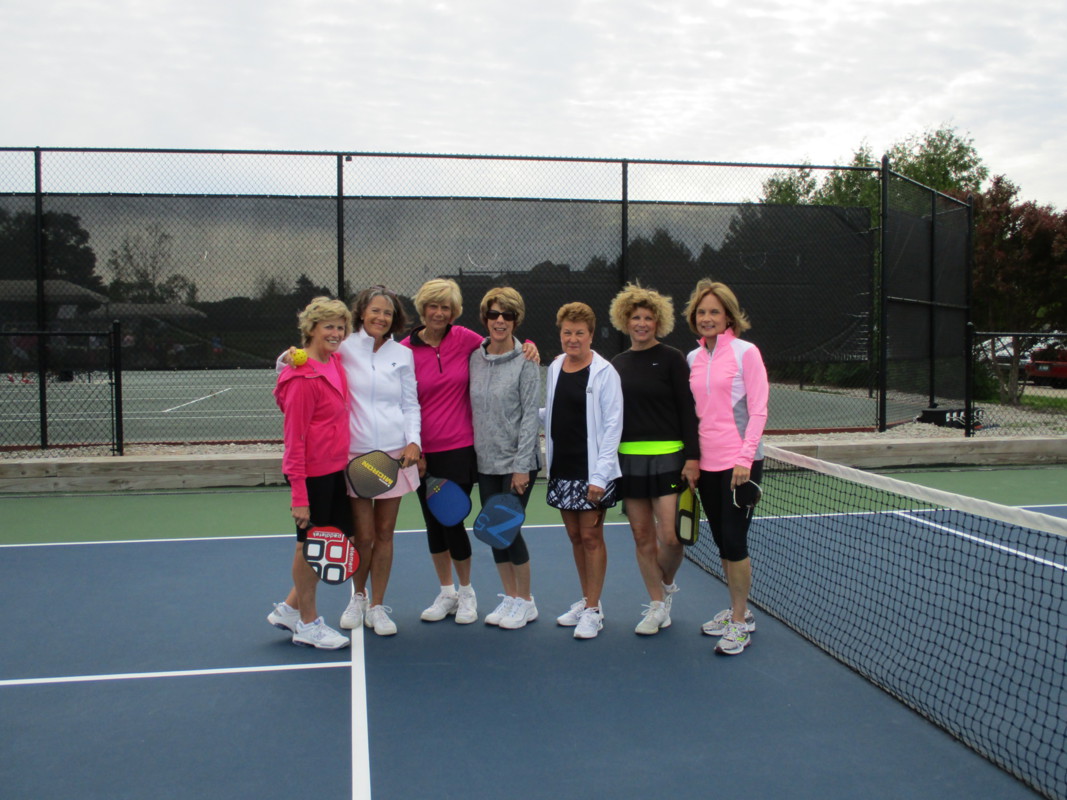 A certified sommelier with a background in food, beverage and experience at the Detroit Athletic Club among other places, Marazzo focused some early energy on elevating the club’s dining program. He selected Culinary Institute of America-trained chef Michael Starkey from a national field of 400 applicants.

Chef Starkey’s known for his kindness, warmth and motto, “failure is not an option,” Marazzo says. “I’ve never seen him say ‘No,’ he couldn’t do something for a member.”

That the membership “thinks he walks on water” is evident as you stroll with him to the dining room and see how he’s greeted like a rock star. His reverence for food is just as evident if you ask for a “sampler” and watch the beautifully plated courses appear, starting with a poke bowl featuring salmon he sourced from the brothers of a former girlfriend in Maui—fish straight from the Malokai channel to Birchwood. Members and their guests can opt for items from the regular menu or the week’s culinary features; this particular week’s options include Wyoming elk, a wild mushroom leek strudel and a fall farmer’s salad of vegetables locally sourced down to the apple cider cream dressing. Special requests are his specialty; if a member can’t decide between two styles of fresh, black grouper or Chilean sea bass, he’s known to offer them a side-by-side tasting. Buying fresh and local, as he does with Amish raised chickens, is his specialty, but so are special treats like truffles sent by a forager friend in France.

“We really try to work with seasons, availability. That’s what’s key to me,” Starkey says. “You’re looking at the very best of the best for that growing period. I’ve always believed that when you’re plucking a tomato from literally down the street—yellow tomatoes, heirloom tomatoes, red tomatoes, cherry tomatoes—it is amazing. If they have a lot, we’ll make a bisque or do a salad or use them on a margarita flatbread. But we get them at the peak of taste and texture. When you can offer that to your clientele, your membership, they really appreciate that.” 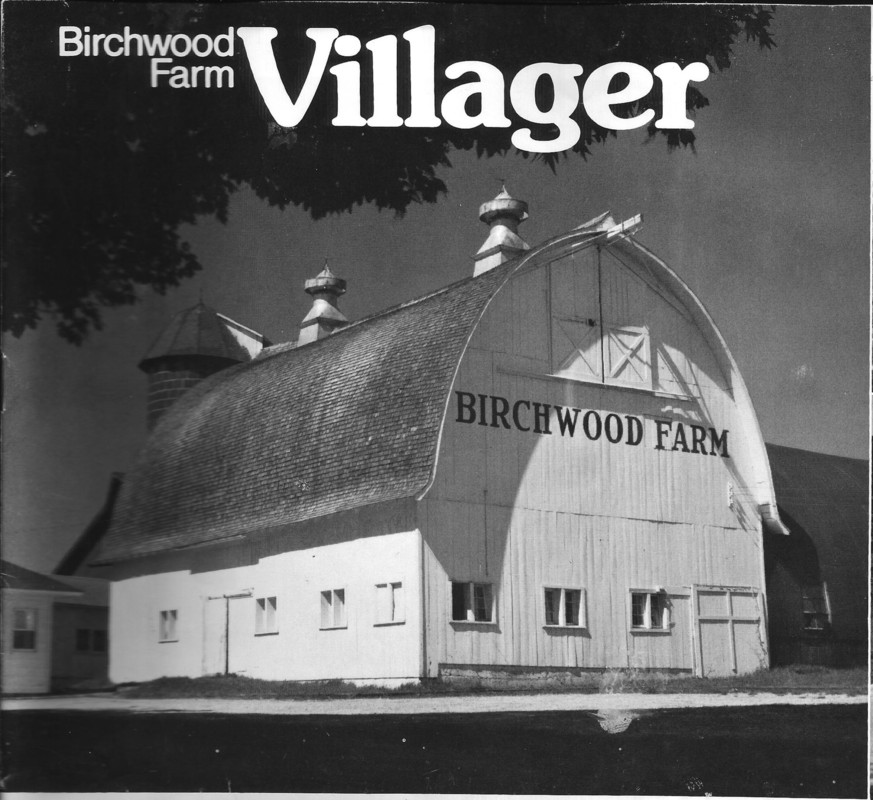 A Club with a Tasteful Past

Fine dining has a strong history at Birchwood; there’s even a fun link to the local food movement of the past, too.

The land upon which Birchwood now sits was homesteaded in the mid-1800s but sold in 1913 to Chicago banker Joseph E. Otis who named the estate Birchwood Farm and set out to create a model dairy farm. By all accounts, he succeeded. His chickens produced the largest eggs in Emmett County, his strawberries were perhaps the largest and the cream from the cows extra heavy, the milk extra rich. His purebred Jersey cows took first place every year at the local fair until he sold the farm for the production of beef cattle.

In 1959, the farm took on new life as a potato seed farm for the New Era potato chip company and also a place for employee recreation. The course of Birchwood took a dramatic new direction when the farm was purchased in 1971 by Bill E. Cottrill, a land developer from the Flint/Grand Blanc area, who transformed the property into one of the most desirable residential/resort communities in the Midwest.

Pamphlets at the time billed Birchwood as a place where “the most desirable modern aspects of luxurious leisure living are added to the most sought-after heritages of a peaceful American past.” It was a place, then and perhaps now, where “interesting and appealing individuals can share common sports and social interests; where there is peace of mind and security in feeling confident that almost certainly will nothing more tempting appear on the horizon; where it is genuinely possible to enjoy a second life of leisure away from the crowds and tensions of workaday metropolitan areas without sacrificing one whit the comforts, convenience and luxuries we all have come to take for granted.”

Lou Zako, a retired physician and Birchwood member, is often jokingly referred to as the mayor of Harbor Springs: He does hold the honor of being the oldest member in terms of longevity. He bought a lot in 1973, two years before the big grand opening. He was a vacationer but eventually wanted to be up so often that he moved his practice from the Detroit area. He calls it the “best-kept secret” in Michigan for natural beauty, activities and practical things, such as Birchwood is like a mini city, with its own water system, 24-hour EMS and security staff (providing 911 response for the rest of West Traverse township). He sees this as a great selling point for a retirement community. There’s the fun too, including a new pool that doubled the size of the old one, a gradual-entry kids pool, an on-site fitness center and plans for additional amenities like a potential game room for children and young families. 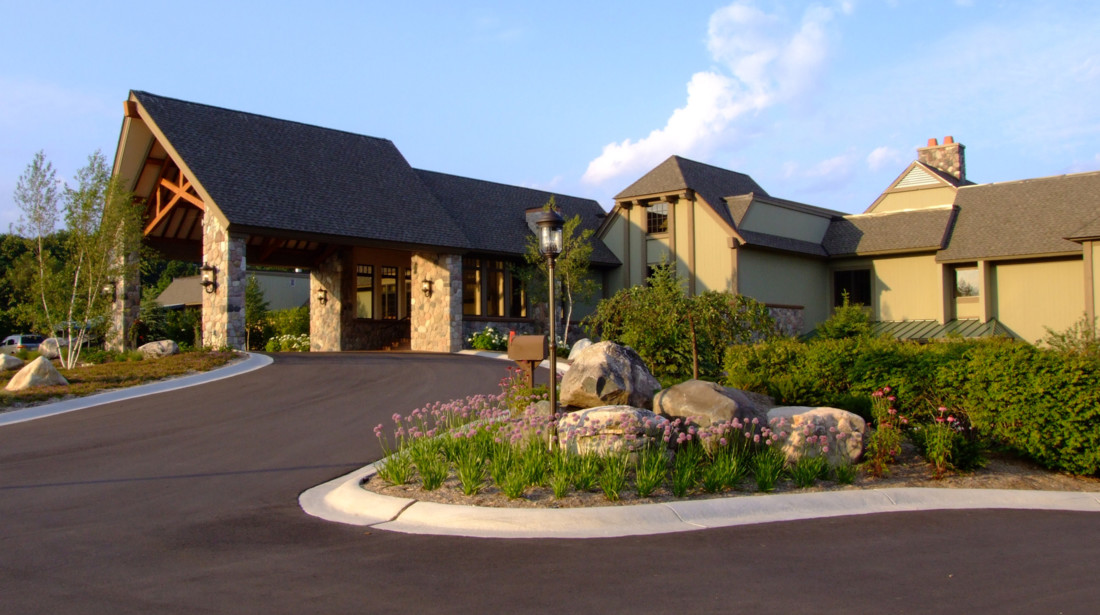 A Dink and a Drink

Whether it’s the beer and bocce league or “dink and a drink” night (themed around a pickleball move involving a tap over the net), existing activities almost always come with a clever twist. But there’s serious play, too, on the championship golf courses, clay tennis courts and four designated pickleball courts.

Last summer, the club played host to pro pickleball player and ambassador Deb Mascarin. She brought visibility to the sport, taught lessons and taught participants in an already popular on-site sport “the proper way to play” with strategies and techniques, says club member and avid player Laurie Glissman. “Our game has elevated much higher than it would have, and she’s grown the program. A lot of people were playing every day, and people would stop and watch and say, ‘I could probably do that.’ It’s just a lot of fun.”

Golf with a Twist

Laurie and her husband, Terry, host an annual couple’s scramble, one that last year played on an “around the world” theme by serving saki at the Japan hole, margaritas in Mexico and so on. But Terry brings a serious passion for golf, as well. In addition to his role as a board member and liaison to the golf committee, he plays five to seven days a week, getting in about 100 rounds a summer.

“People say, ‘You play the same course every day,’” says Terry, whose in-laws also lived in Birchwood. “‘Don’t you get tired of it?’ You don’t. It’s not the most difficult course, but it’s a course that’s very playable. You enjoy playing it.”

A third set of nine holes was added to the original 18 in 1999, and that brought added variety and accessibility. Members never have to wait for a tee time, Terry explains, and there are so many activities “you can’t do everything.” He lists men’s leagues, ladies, couples, the nine and dine, tournaments and more. “It’s so full, but there’s plenty of room.”

Director of Golf Cris Cavitt came to the club in 1998 and says he “never left” and never plans to, for reasons from beauty to community to the uniqueness of the course. Says Cavitt: “It’s challenging but friendly, there’s not a lot of water and not a lot of carries. It’s competitive but playable.”

The first hole showcases a distant Lake Michigan view so beautiful that it doubles as a popular wedding venue. As he shows a visitor around the course, he stops at nearly every hole to greet a member, to make a note about their play or ask about family. He knows every member, without exception, and says most are equally devoted to one another.

“There are lifelong friendships here,” he says. “They know each other outside of Birchwood now, share family celebrations. I’ve seen so many acts of kindness in times of need.”