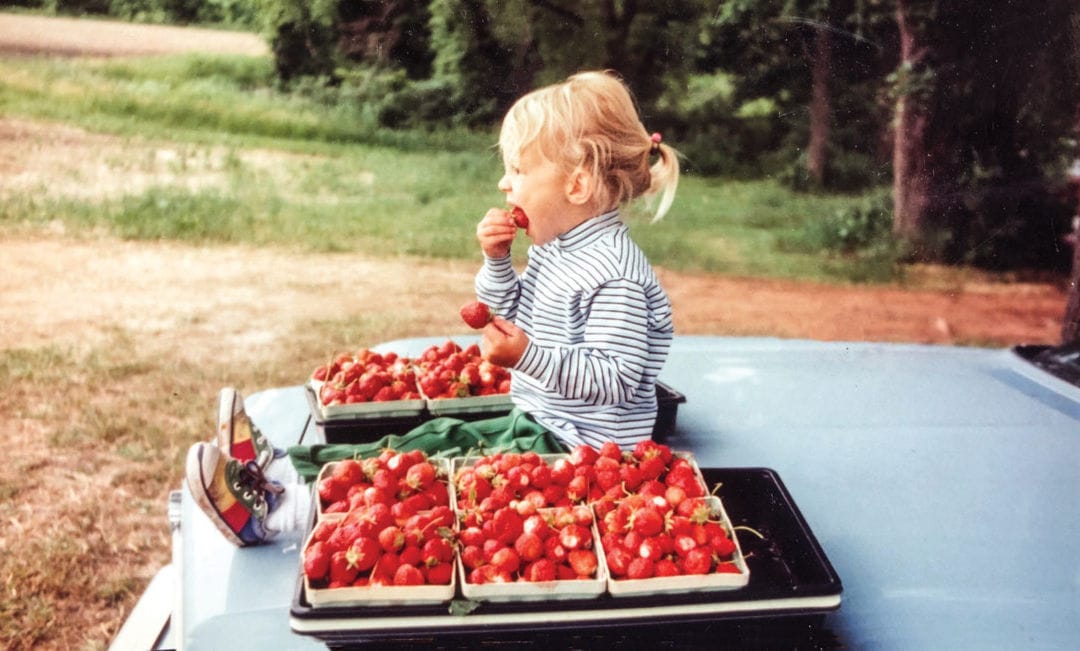 “The Best is Yet to Come” essay featured in the March 2021 annual food and drink issue of Traverse, Northern Michigan’s Magazine. Check it out!

My husband and I were recently standing around a winter bonfire at Hop Lot in Suttons Bay. Our kids were with my parents for the night and we had settled in with a few (masked) strangers. At one point, the conversation turned to what everyone did for work. I was hesitant.

Being a food journalist is a joy, but talking about it can be tricky. When people hear what I do, many ask questions that don’t have absolute answers. “What do you like to cook?” “What’s your favorite restaurant?” The query that really throws me is “What was your most memorable meal?” The question sends me on a trip down memory lane that is too complicated to distill into a polite round of bonfire banter.

I grew up downstate, near Detroit. My dad planted a vegetable garden in our suburban lawn and my mom had a scratch-cooked supper ready by six. When it was time to unplug, we’d head North. I learned how to roast marshmallows while camping on Burt Lake and how to live out of a small cooler during a two-night canoe trip down the Au Sable. Eventually, we traded sleeping on the ground for sleeping in bunks, and became regulars at Camp Michigania—where my brother and I would run our cups under all the different Kool-Aid nozzles to create our own special recipe. In the winter months, we would wake before dawn and bomb up to Boyne Highlands for a few ski runs, eating donuts for breakfast on the way. Ultimately, my parents bought a log cabin near Petoskey. I was introduced to the Jelly Roll Blues Band at the Legs Inn, dined at the late great Tapawingo, reeled in my first lake trout and learned how to make Hummers long before I turned 21.

When we weren’t sitting around a Northern Michigan campfire, however, my childhood vacations looked different than most. My dad made a machine that was used by egg farmers around the world. In an era where telegrams gave way to fax machines, he traversed the globe making sales calls to remote agricultural villages throughout six of the seven continents. Sometimes, I was lucky enough to tag along. I spent my 15th birthday drinking retsina with townspeople on the streets of Delphi, Greece. The first time I was invited to the back of the house for a kitchen tour, I was in a Sicilian mountain town where an old stable had been converted into a restaurant. I learned to twist my wrist to prevent a bottle of wine from dripping in Stellenbosch, South Africa. Whether I was 45 degrees below the equator or right here 45 degrees above it, I understood at an early age that food tells us so much about a region’s history, traditions, climate, religion and customs. When people ask about my most memorable meal, I certainly think of cooking with my grandparents and of the Michelin-starred menus I’ve been lucky enough to hold, but it is the meals we ate during these childhood business trips that inspired my career.

Likely because of these trips, I was thirsty for more adventures and left Michigan after I graduated from high school. I spent four years in Charlottesville, Virginia; 10 years in New York City; and another 12 in Denver. Across all of those zip codes, however, I never lost sight of my Midwestern roots. An annual trip Up North was always my most cherished week of the year. In fact, thanks to one such visit, I ultimately married my childhood crush. During our Colorado chapter, despite the extra mileage, Dan and I spent summer vacations exactly as we had as kids—driving around Northern Michigan introducing our own children to Sleeping Bear Dunes, the Soo Locks, the Keweenaw Peninsula and the Petoskey church where we were married. We always found so much peace along the shoreline of our shared home state. In 2016, we bought a fixer-upper farmhouse south of Leland and spent as much time here as possible; and in late 2019, the dream of moving here year-round became a reality.

Our return to the Great Lakes State after decades of urban living has been an adjustment, for sure. There is no Instacart grocery delivery in Leelanau County. I cannot ping Uber Eats to bring sushi whenever a craving strikes. We miss Lyft on date night. I’m still figuring out which markets carry what and just how early they close. But we’ve gained so very much. There is a forest of ramps out our back door that will make a blanket of wet leaves bulge later this month. There are herbs in the garden that will reawaken thereafter. Our neighbors to the west farm wine grapes. Our neighbors to the east grow cherries. An older gentleman down the hill drove his three-wheeler over last summer with a bag of cucumbers he couldn’t put by. Dear friends down the way raise pigs and drop off pork chops. Our 9-year-old twin sons brought home a 22-inch spawning Coho they caught in Fishtown this fall. And this cook is loving every minute of it. Just as I’d done at my parents’ cabin, we pickle those ramps. Our 4-year-old daughter helped me make tzatziki with the neighbor’s cukes. I sautéed those pork chops with onions, local apples and a smidge of area riesling. We harvested the roe from that salmon and salted our own caviar. After decades of roaming the globe, it tastes so very good to be home.

When Traverse Magazine asked me to take a few pages for them, it felt like the assignment of a lifetime. Bringing my passion for all things food and beverage to the ingredients and people of this special place is a great honor. In the months to come, I’m excited to celebrate the incredible fish, fruits, vegetables, cheeses, wines and beers that we are lucky to call our own. In time, I hope that when cherries come into season we will think not only of cherry pie, but also of the famed French dessert cherry clafoutis; or of a chilled cherry soup that is beloved in Hungary; or maybe even albalu polow, a Persian rice dish with sour cherries. I hope you’ll join me in making homemade cocktail cherries some summer, which can adorn drinks like the Hemingway Daiquiri, featured in our new Last Call layout. In our On the Table column, I’m excited to share fresh things to do with old favorites, like oversized croutons that are topped with whitefish pâté for a spring salad this month.

With these recipes and the many that will follow, I encourage readers to think of our ingredient lists as a starting point. If you actually enjoy “the great grocery hunt,” like I do, go for it; but if we suggest Champagne vinegar and all you’ve got is apple cider vinegar, by all means use what you have. Food is meant to be fun. It is meant to encourage conversation. As part of that conversation, I hope we learn—together—that my most memorable meal is yet to come … right here in this gorgeous part of the world I am grateful to call home.

Stacey Brugeman is a Leelanau County-based food and beverage writer and editor. Her work has appeared in Food & Wine, Saveur, Travel + Leisure, Eater and Denver’s 5280, where she served as Restaurant Critic. These days, Brugeman is busy feeding her three young kids. Join their dinner conversation on Instagram @staceybrugeman.

Find Stacey Brugeman’s celebration of Northern Michigan food and drink in the March 2021 issue of Traverse, Northern Michigan’s Magazine; or subscribe and get Traverse and Stacey’s recipes, recommendations and stories delivered to your door each month.