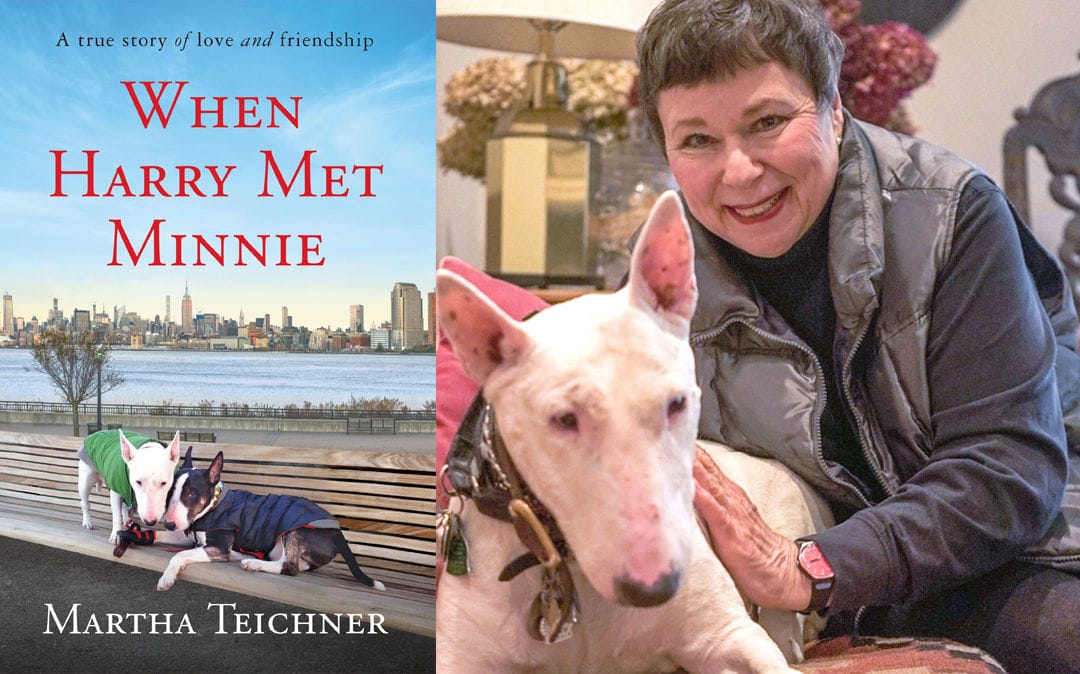 Author, journalist, CBS Sunday Morning correspondent and Traverse City native Martha Teichner joins the National Writers Series to discuss her new (and first) book, “When Harry Met Minnie,” Thursday, February 4 at 7 p.m. A purchase of Teichner’s book is required to attend the virtual discussion, and copies can be ordered at registration with a 20% discount at Horizon Books (register online at NWS website). The guest host for this event is reporter, news anchor and Michigan Radio host Cynthia Canty.

For journalist, author, CBS Sunday Morning correspondent and Traverse City native Martha Teichner, her decision to say “yes” has opened her up to many fateful events. Her new book, “When Harry Met Minnie,” wouldn’t exist without saying “yes” to an acquaintance at a New York City park years ago.

Teichner, a lifelong lover of bull terriers and owner of one named Minnie, agreed to meet a woman named Carol, who was looking for someone to take care of her bull terrier, Harry. Carol was in the late stages of cancer, brought on by breathing toxins from Ground Zero, which wasn’t far from the apartment where she lived.

The book goes well beyond the boy-dog-meets-girl-dog story of these two quirky pets. The story of Teichner’s fast friendship with Carol and her circle of compatriots is a deeply moving display of how people can affect your life if you only just let them in … which only gets harder as we get older.

It was all those things that factored into exactly why this story became Teichner’s first book. “[It was] the chance encounter that set it all in motion, the closeness of the people around Carol … the dogs and how they really became inseparable. And the deep emotion that I felt being part of all,” Teichner says. “All of those things told me that something special was happening and that … it needed preserving. Carol needed a legacy. And in a way, the dogs needed a legacy.”

“When Harry Met Minnie” is also a story about what it’s like learning to love someone who you know is going to leave you someday, and someday soon. It’s a story about end-of-life issues, about watching someone you know and care for slip away, while mourning a friendship that could have been (and should have been) much longer.

“There’s a sort of an everyman quality about the story in the sense that things happen to people over time, and they can say yes, or they can say no to what comes their way,” Teichner says. “And as a result of this chance encounter and everybody around Carol saying yes for a very intense period of time, there was a great deal of emotion and a great deal of love and friendship and caring.”

Saying “yes” also helped pave the way for the creation of the Teichner Preserve in Leelanau County (which Teichner describes as “probably the most important thing I’ve ever done in my life”). Teichner remains very much a Michigander at heart, down to a deep and abiding love for nature as well as how to raise your hand and point precisely to your fingers or palm to show people where you come from—“Only Michiganders know how to do that ‘point’ right,” she says.

The full tale of how Teichner helped set aside the preserve with the help of the Leelanau Conservatory is one best experienced in the book, but it involved being in just the right place for the universe to open up once again and offer a choice. If Teichner hadn’t been waiting for just the right cherry bratwurst, it wouldn’t have happened.

“It was just an incredible chance encounter. Fate, serendipity, whatever you want to call it … I’ve often said to people that it’s like my parents rose up from the grave and guided me to the right place at the right time,” Teichner explains.

Clearly, the answer was once again “yes” to fate, and generations of Michiganders will get to benefit from those seemingly-random steps that allowed her and the Conservatory to intervene.

All of this adds up to what Teichner hopes people take away from “When Harry Met Minnie” (other than how particular bull terriers owners are about their pets—readers will learn plenty about that). Teichner believes the rewards of saying “yes” to the universe are worth the risk. “There are opportunities in the world to embrace chance encounters and friendship. And even though you risk pain and loss, it’s worth having the experiences because they’re rich and full of joy and laughter and love,” she says.

“At any time in your life, you can be given a gift of a set of experiences like mine that will enrich you forever.”