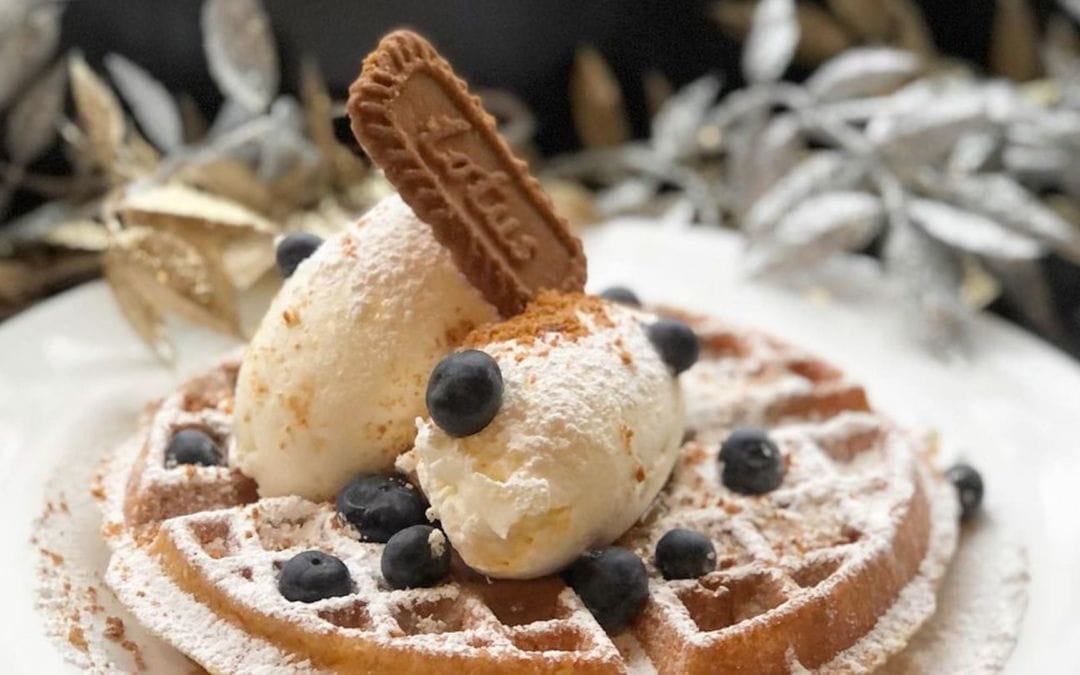 A Parisian-inspired sign hangs above Front Street in Traverse City. It looks like something from a time past—la belle époque, perhaps. It draws people off the sidewalk, huddling underneath with hands cupped around the frosty glass of the windows, stealing glances inside. It belongs to Brasserie Amie, the newest restaurant in downtown Traverse City.

The brasserie (which means brewery in French) was opened by the owners of The Parlor and Patisserie Amie. The latter has been closed since the start of the pandemic, making way for Brasserie Amie to open. In fact, the beloved brunch menu is exactly the same, albeit for a few additions—namely pizzas and signature plats. “The crowd favorites have all made the transition,” says Laine Ayre, general manager of Brasserie Amie.

The restaurant’s wine, beer, and custom cocktail offerings are also new, and they’re as alluring as they are unique. Try Un Petit Noir, which is a chocolate-y creation made with vodka, chilled espresso, Godiva liqueur, and cocoa and perfected with a sea salt rim. Or, opt for the Voiture de Détroit, which is a combination of Hennessy, Cointreau, cardamom syrup, lemon, and ginger beer. Maybe you’re looking for something you can take to-go? Try the brasserie’s mimosa kits, which include a bottle of bubbly and orange juice for a DIY drink.

“Aside from rolling with the punches of shutdowns and unknown end dates, we have been enjoying the time to put systems in place and use curbside service as a trial run,” Ayre says. “We do miss the friendly faces of the community and look forward to a bustling space for friends and family to gather.”

Bustling sounds like the perfect word for the future of Brasserie Amie, which houses a full-service dining room, a rooftop, which will be home to its own concept, and an upstairs space for private events. “We are anxiously waiting to hear the opening date, which will likely have guidelines and a possible curfew. We will open and follow all guidelines, as the health and wellness of our community is very important.”

Until the ban on indoor dining lifts, the restaurant will continue offering its brunch menu for carryout and curbside service. From savory to sweet, there is a menu item for everyone. Try, for example, the blueberry and cookie butter Belgian waffle, which comes served with a fresh snowfall of powdered sugar. Or, choose the Florentine Benedict, which is a delectable dish made with poached eggs, creamed spinach, and hollandaise.

Stop in or call the restaurant at 231.753.3161 to place an order. The restaurant is open for carryout and curbside service Friday through Saturday from 9 a.m. to 1 p.m.