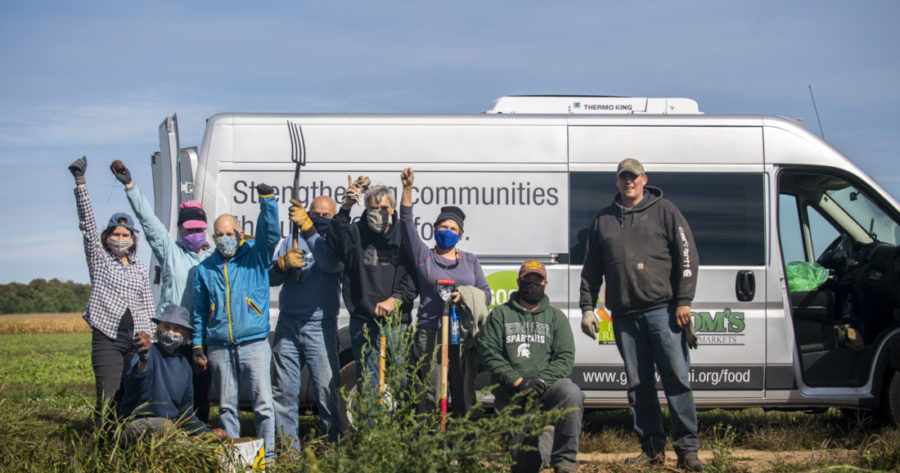 Every morning, a small fleet of Food Rescue trucks makes the rounds to dozens of stores, farms and bakeries. Their mission? To rescue soon-to-expire, fresh and nutritious foods as part of Goodwill Northern Michigan’s Food Rescue program dedicated to not just helping feed people in need in northwest Michigan, but also doing so with healthy food.

The food—everything from prepared dishes to fresh produce—is delivered on the same day, free of charge, to more than 70 food pantries and community meal sites in Grand Traverse, Antrim, Benzie, Kalkaska, and Leelanau counties, where people can access the food for free. About 18,000 residents in the five counties—an area twice the size of Rhode Island—benefit from Goodwill Northern Michigan’s Food Rescue program each year.

Food Rescue has been rescuing food since 2008, when Traverse City community members Homer Nye, Becky Mang, George Powell and Bruce Byl, and Cecil McNally of Goodwill Northern Michigan, came together to found the program. Inspired by Forgotten Harvest’s food rescue program in the Detroit area, the founders realized the extent of the need to provide food in the northwest Michigan region and reached out to the community to raise the resources needed to get the effort off the ground.

The main goal then, as now, is to pick up and deliver fresh food the same day. It’s a feat Food Rescue has mastered logistically with its vehicle fleet, warehouse and packing operations, scheduled pickup and delivery routes, and the dedication of its staff and volunteers. 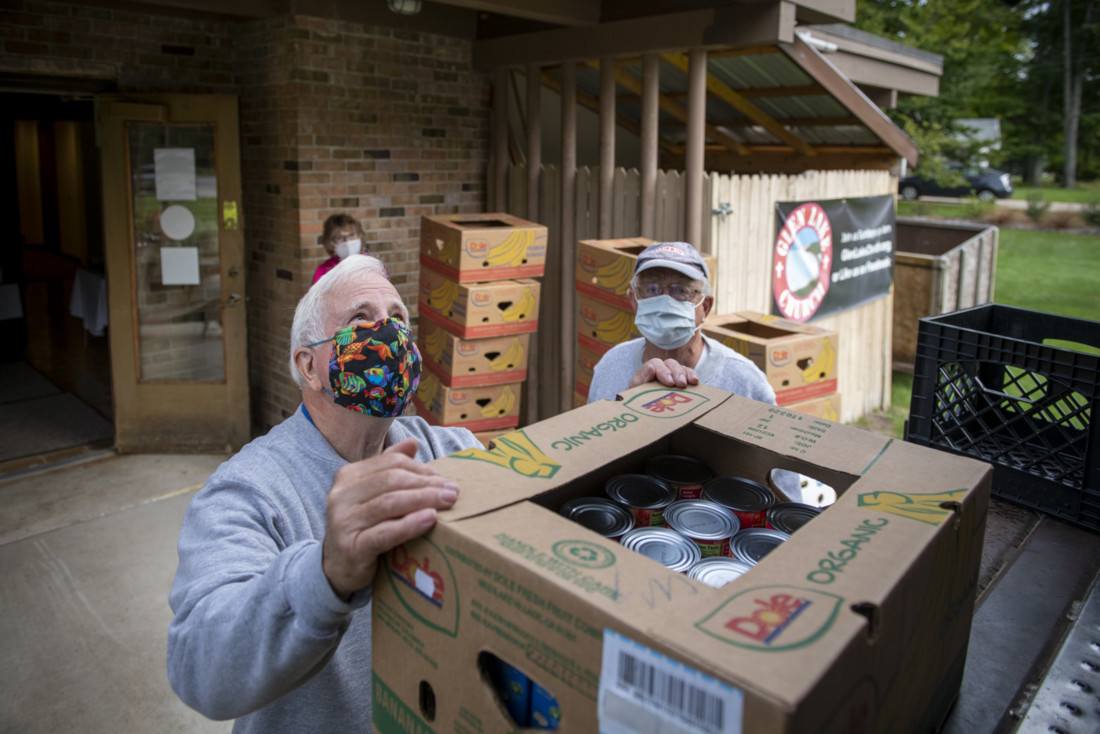 “In just the past year, we have rescued, harvested, repacked and distributed nearly 2 million pounds of food into the regional emergency food system,” says Taylor Moore, Food Rescue Manager for Goodwill Northern Michigan. According to the USDA, that’s enough food to make more than 1.6 million meals.

Goodwill Northern Michigan’s program works with more than 150 grocery stores, bakeries, farms, food processors and restaurants to collect soon-to-expire food. Every week, Food Rescue picks up and delivers $70,000 worth of food to its Northwest Food Coalition partner food pantries and community meal sites. Efforts to deliver healthier foods—fruits, vegetables and protein—have intensified over the years in order to better meet the nutritional needs of families and individuals in need.

“Everyone deserves to have access to fresh, healthy food,” Moore says. “I hear too many stories of kids having never tried a blueberry or a lot of different produce. It’s something we’re working hard to change.” 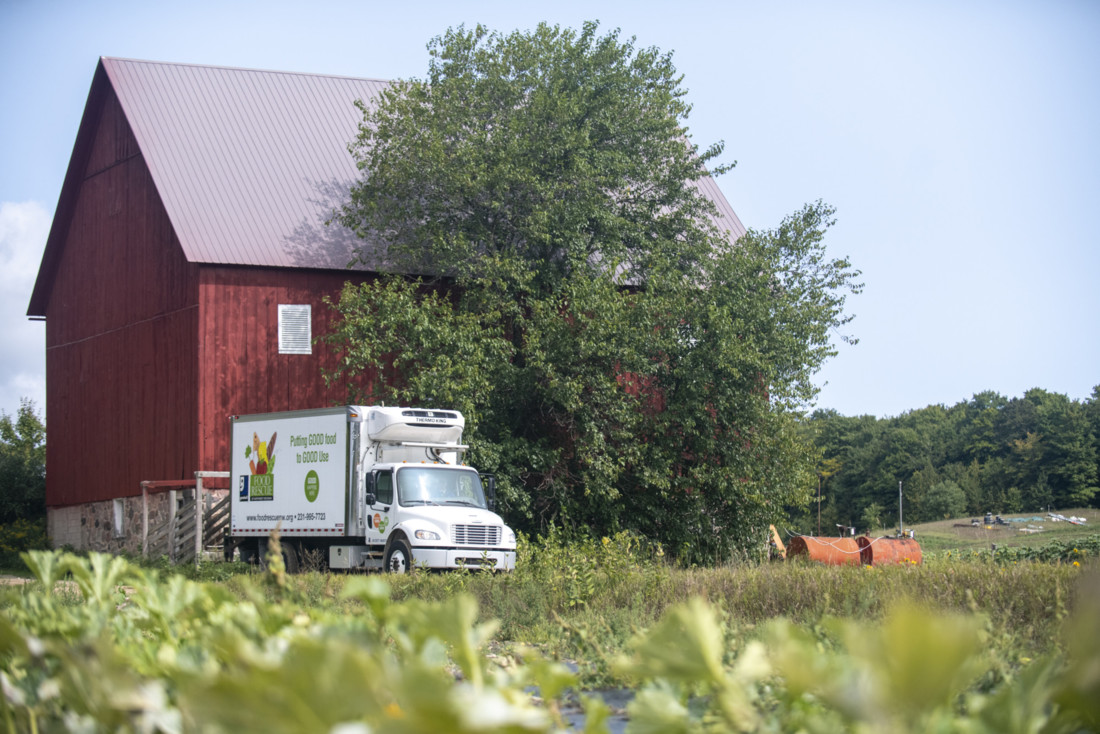 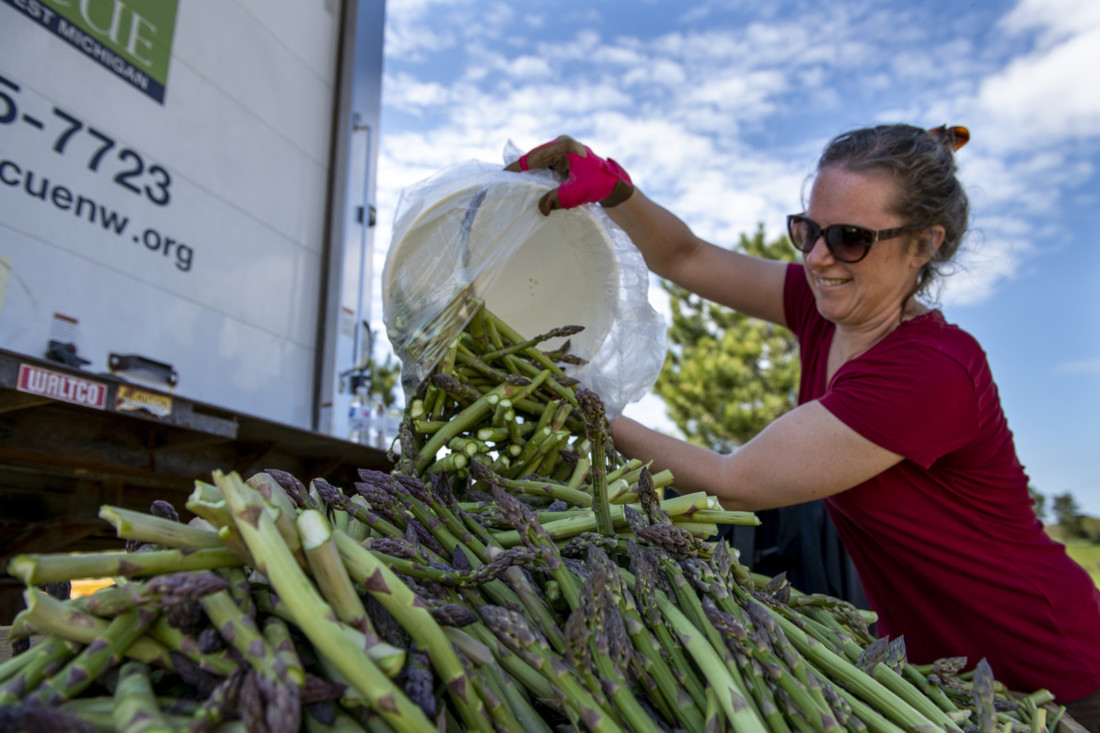 Over the past five years, Food Rescue’s reach has grown, rescuing and delivering more food to pantries and community meal sites. That amount of food delivered has increased by 60 percent, Moore says, attributing a third of the spike to Costco’s participation in the Goodwill Northern Michigan program. Food Rescue also picks up food donations from a host of regional partners, including Oleson’s Food Stores, Oryana Community Co-Op, Meijer, Tom’s Food Markets and Village Markets.

“Food Rescue is successful because it is a collaborative community program,” says Goodwill Northern Michigan Executive Director Dan Buron. “By collaborating with the Northwest Food Coalition, we’re able to multiply the impact of our collective efforts.”

Moore agrees that collaboration is at the core of Food Rescue’s impact. “We work with over 200 businesses and nonprofits,” Moore says. “From grocery store associates, farmers, educators, clergy, cooks and volunteers, it takes thousands of people working together to make sure thousands more do not go hungry.”

Oryana has been a partner since the program began. Food Rescue’s efforts align with Oryana’s mission of providing the community with good, healthy food produced in ecologically-sound ways, and reducing the amount of food waste dumped in landfills.

“The biggest amount of food we donate is produce, fruits and vegetables,” says Steve Nance, general manager of Oryana. “Food Rescue has become an integral part of reducing Oryana’s food waste to as minimal as possible. We don’t have much of anything going into the landfill.”

Food waste is a national issue; an estimated 40% of food grown, processed and transported in the United States will never be consumed.

“While we have all this food waste, one in eight people in the country are hungry and don’t have an adequate amount of food,” Moore says. “This is an injustice. There’s no reason why. We have to find the will to address this. There is no reason we should be wasting 40 percent of our food while people are going hungry.” 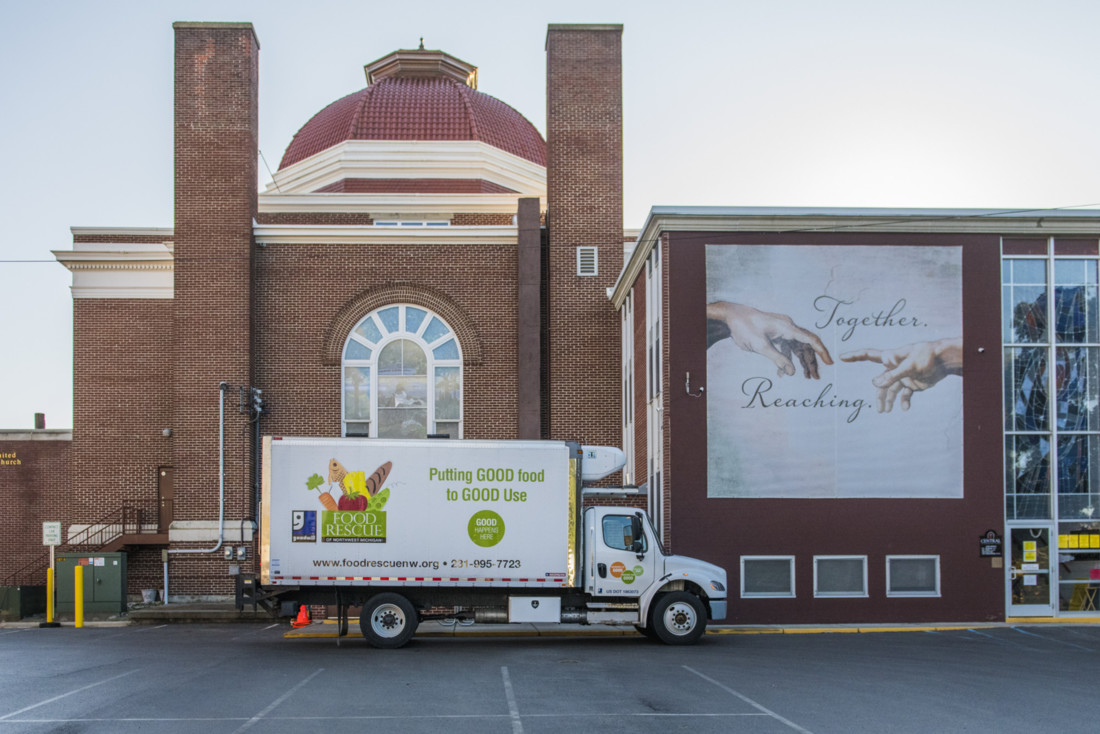 Before Food Rescue came along, many of the program’s donors did not have an accurate picture of how much food was just being tossed in the dumpster.

“Now, everything we pick up is weighed from every donor,” says Becky Mang, one of the founders of Food Rescue and an active volunteer. “Stores and donors have a much better idea of how much food is being wasted. Every year the percentage of healthy food we deliver increases. A lot of places have come to depend on us. They don’t want to throw food away.”

The donations amount to 1.9 million pounds of food each year.

Robert “Izzy” Isble, a Food Rescue driver, was unaware of how much food is saved from being tossed until he began picking up food from donors and delivering it to Coalition members two-and-a-half years ago.

“It amazes me every day,” says Isble, a former math and social studies teacher. “It makes you stop and think about how much food, particularly produce, would be thrown in the dumpster if it wasn’t for Food Rescue. You really have no idea until you start seeing it.”

The availability of fresh fruits and vegetables and protein has been a game-changer at meal programs run by churches and charitable organizations.

“Goodwill’s Food Rescue has allowed me to use fresh veggies and fruits and a variety of meats to prepare meals with,” says Jane Lippert, community outreach coordinator at Central United Methodist Church in Traverse City, which has run a meal program for about 20 years. Before Food Rescue came along, community meal sites like Central United’s served more prepared foods, more rice-, noodle- or bread-based meals, less dairy products and more desserts.

“They’ve allowed me to stretch my food budget. Food Rescue has increased the nutritional value of meals served free in the community,” she adds. “That leads to better health, more energy, helps people hold down a job and gives them more strength to overcome hurdles.”

Goodwill Northern Michigan’s Food Rescue operates at no cost to the food pantries, which is unusual in the industry, Moore says. Because the founders of Food Rescue were committed to providing the service at no cost, the program is able to save the region’s food pantries $300,000 a year, money that can be used in other areas of need in the community. Monetary donations from individual donors and foundations make this possible.

How You Can Help

Donations to help with Food Rescue operations are always needed. To donate, go to goodwillnmi.org/donate. 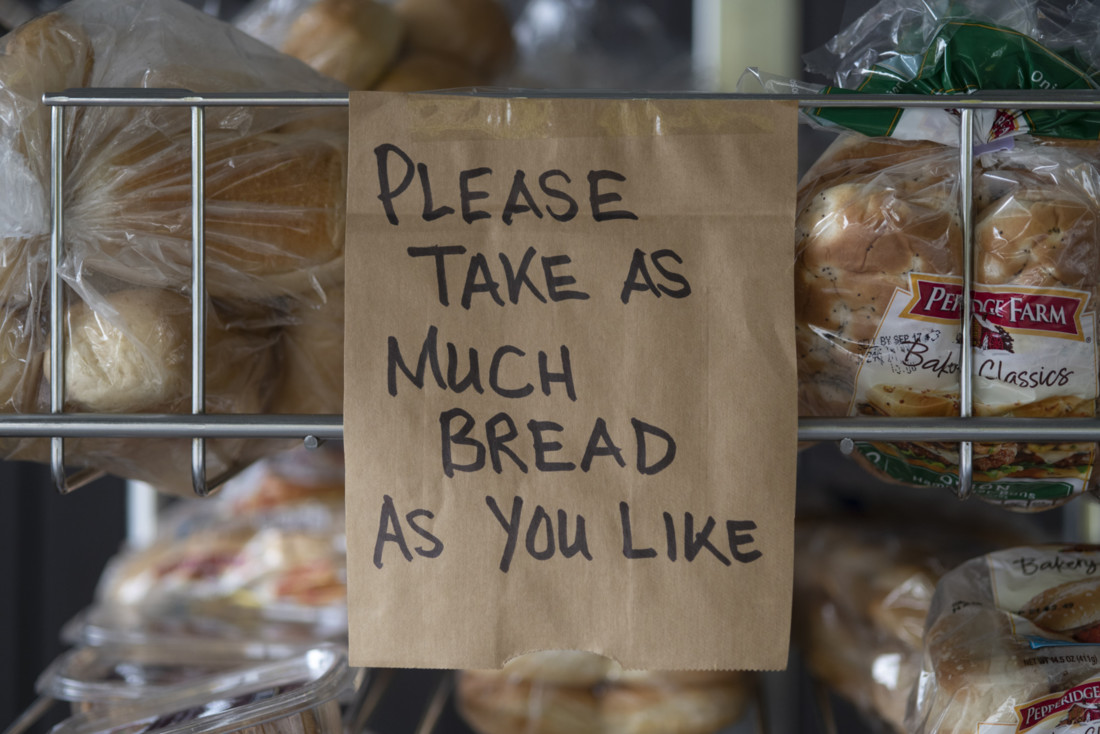 The Need for Food Rescue

The need for fresh, healthy food is pervasive across the five-county region. It’s not just people living in poverty who go to food pantries or show up for community meals. Many times, it’s people who find themselves with an unexpected bill who then are forced to cut their food budget. The high cost of housing in the region also plays a factor, with families curtailing money spent on groceries to make the rent or mortgage.

“It’s the working poor,” Moore says. “At any given moment, a third of all households might be in need of food assistance. It’s a massive, systemic problem that’s only been exacerbated by COVID-19.”

In northwest Michigan, 49,000 households are food insecure, living on the cusp of not having enough nutritious food to feed their families. They spend a large part of each day trying to get enough food. In many cases, people have to weigh the price of gas, utilities, medical bills and childcare with the price of nutritious food like fresh produce. Often, they opt for convenient foods that are less expensive, but also less healthy. Some towns have lost full-service grocery stores.

“Food security means having choice and control over what you eat,” says Northwest Food Coalition Coordinator Val Stone. “It means you can get the right food at the right time so that the food you eat meets your nutritional and dietary needs and your life situation. Too many households have little to no experience with what food security is like. One emergency car repair or losing work while you care for a sick child can mean the difference between buying enough food or paying your light bill. Our pantries rely on the generosity of donors and Food Rescue and our partnership is the lifeblood of feeding hungry people.”

As the groundwork was being laid for Food Rescue all those years ago, one founder, Bruce Byl, had his eye on the future—with the hope that Food Rescue would be out of business in five years, the burning need extinguished, with no need to rescue food any longer.

“The need continues to increase. There are big issues here, big challenges. There are so many people who don’t have access to healthy, nutritional food—protein, eggs, meat, any type of vegetable—all important to get into people’s diets,” Byl says. “It’s very sad to think how many people in the area we serve are food insecure.”