Experience a Snowy Sleigh Ride at Fantail Farm in Benzonia 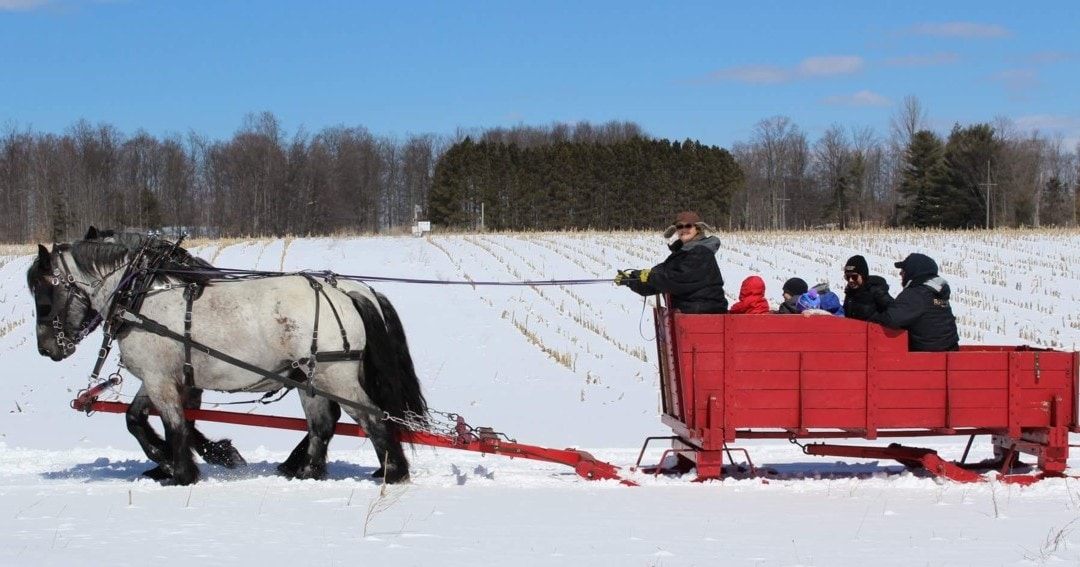 A sleigh ride in Northern Michigan turns a winter’s day into an unforgettable memory.

Does a sleigh ride sound like the perfect winter activity for you? Enter our giveaway for a chance to win a private family sleigh ride at Fantail Farm!

On a calendar-perfect day this past fall, I stand next to Susan Zenker and watch as she begins to whistle in the eight horses she owns with her husband, Craig Fitzhugh. The horses—most of them, anyhow—pull the wagons and sleighs at the couple’s Fantail Farm, set on 120 hardwood-covered acres in Benzie County. When they aren’t working, the free-range horses mill in and out of a magnificent century-old barn filled with hay on land owned by Zenker’s mother, where we are this morning, several miles away from Fantail Farm. Free-ranging, Zenker tells me between whistles, is much healthier for the horses than keeping them cooped up in stalls.

Zenker’s whistles float down a two-track that leads into the forest. But there is no sign of those horses. Then she calls, “C’mon you guys!” Mildly exasperated, she turns to me smiling and says, “It’s the middle of the morning—they are saying to each other, ‘What does she want? She might have a snack …'”

Sure enough, a few moments later, the horses emerge from the trees, a magnificent mass of muscle, waving manes and iridescent coats. Haylee, an American Brabant and the herd boss, leads the way, while Levi, a North American Spotted Draft, tries to pass her. Close behind are Haylee’s sister, Hannah, and half-brothers Finn, Fergus and Shaymus—all American Brabants. Chuckles, the sole Percheron, takes up the rear while tiny Roscoe, a pony horse (and the farm’s mascot), is lost somewhere in the milieu of his nearly 2,000-pound herd mates.

Zenker greets each horse joyfully—that emotion, coupled with well-earned pride at what she and Fitzhugh have accomplished, reverberates through Fantail Farm. A life- long horsewoman, Zenker didn’t realize how much she loved driving—rather than riding—horses until she bought Levi, her first draft horse. She tumbled off the massive creature several times before heading to the Northwest Michigan Draft Horse and Mule Association for help. She soon found she “had a knack for driving,” and also a circle of like-minded friends and mentors who helped her learn to drive the huge horses.

Before she knew it, she was searching online for other draft horses and came across Haylee. Next came friends asking for sleigh rides … The couple’s property, which has been in Zenker’s family since her grandfather purchased it in the 1960s, was tailor-made for sleigh rides.

Zenker and Fitzhugh went to work, turning her grandfather’s old lumber mill into a barn—a place where gleaming halters and sleigh bells now hang from the wall—and opened for rides in 2015. They named their new business Fantail Farm, both for the way their horses’ tails fan out in the wind and because a fantail is a part of a freighter— Fitzhugh spends his summers working on the Great Lakes as a Merchant Marine.

The couple has accumulated sleighs along the way, including a couple of two-seat sleighs that Zenker says have turned into a custom-niche for the farm. “I found our first one for sale in Minnesota and we thought, ‘Why not drive out and buy it?’” Zenker says. “Along the way, we started to wonder if it was a good decision … then my phone rang and the woman calling asked me if we had two-seater sleighs,” she says laughing.

Fantail’s fleet of sleighs also includes three conversion wagons that convert to sleighs and an old-fashioned bobsled. Last winter, Zenker and Fitzhugh outfitted the bobsled so they could safely take a young girl in a wheelchair for a ride. “We locked her in with hay bales and her father stood behind her and her mother in front. Every time I looked back she was just smiling away,” Zenker says.

No doubt, smiles are infectious at Fantail Farm, where the lyrics from “Jingle Bells,” seem to come alive: The proud, beautiful horses; old-fashioned sleigh; snowy, tree-lined trails; the jingle of sleigh-bells (including a set that Zenker’s grandfather, a logger who used horses, gave her) and, of course, hot cocoa at the end of the ride.

“Our goal is to help people make memories with this country tradition,” Zenker says. “It’s also about grandma and grandpa, who remember having a winter sleigh ride with their family when they were children. They love passing on those memories to their grandkids.” Zenker pauses a moment and adds: “It really is about family time together in this day when there are so many other distractions.”

Find this article and many others in the December 2020 issue of Traverse, Northern Michigan’s Magazine; or subscribe to get Traverse delivered to your door all year round.