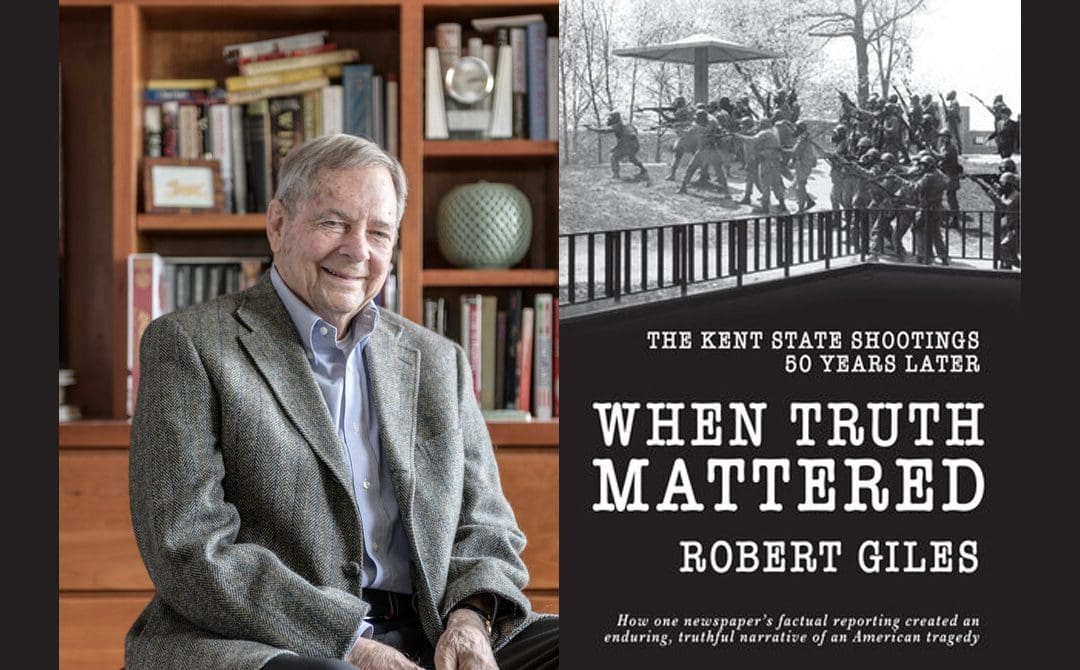 This free, virtual event is a partnership of the International Affairs Forum and the National Writers Series. Register here. Guest host for the Traverse City event is Cynthia Canty, an Emmy award-winning radio and television journalist and former host of Michigan Radio’s “Stateside.”

The year was 1970. Unrest surrounding the Vietnam War had already been simmering for several years and President Nixon’s introduction of the Cambodian Campaign that April had only added fuel to fire. In response, protest rallies were erupting nationwide—and the city of Kent, Ohio, was no exception. On the afternoon of May 4, students at Kent State University were swiftly assembling, but, so was the National Guard. By twelve o’clock, 28 Guardsmen had stormed the campus, blasting an otherwise-peaceful protest with bullets. When the dust finally settled, four students were dead, and nine others had been critically injured.

While the story would eventually make national headlines, reporters from a local news entity, the Akron Beacon Journal, were first on the scene. Led by Robert Giles, then the “number two” newsroom editor, the Akron Beacon Journal’s exacting analysis of the “May 4th Massacre” would stand the test of time—50 years, in fact—as a testament to true and honest storytelling. But for Giles, the story’s significance hits closer to home. “I wanted to honor the Beacon Journal staff, who told that truthful story,” he says. “In my mind, they were heroic in their dedication to the story, and I want the public to recognize the great journalism they did.”

At the time of the Journal’s Kent State coverage, Giles had been left to pilot the paper alone, while his executive editor was away on business. His parting words to Giles? “You’re in charge—don’t screw it up!” Suffice to say, Giles didn’t disappoint; and now he’s finally telling his story. In his debut memoir, “When Truth Mattered,” Giles offers a firsthand look at the circumstances surrounding the Kent State shootings and the small-town paper where it all started.

Though much of media has changed since the story’s original release, the rules of good reporting haven’t. This means that any story worth its salt must be as impartial as possible. “A story well-reported does not have a point of view,” Giles says. “It is based on facts and written in a way that is going to inform people about what’s going on in their communities or around the country.” It’s exactly this standard of relentless reporting to which the Akron Beacon Journal held its writing—and to which reputable papers continue to hold theirs.

But, Giles’s best-kept secret for superior press is trust. “In 1970 at the Akron Beacon Journal, we had, over many years, built trust with our readers,” Giles says. “They were willing to believe that what we published every day was the best available version of the truth.” As such, commitment to content is a reporter’s first priority. “Keep in mind that the most important thing you do is the story,” says Giles. “If you’re truthful, and you gather all the facts, and your values are those that were in place in 1970 and before, you will have success.”

Of course, finding truth in contemporary accounts is another task entirely. “I think truth in media has been under attack,” Giles says, “and some people believe that what’s being alleged against news media is truthful.” So, how can a modern audience discern fact from fallacy? “When you’re reporting, you rely on the experts,” Giles says. “When more and more of our stories are based on solid, scientific information, that’s really an example of good reporting. I’m asking readers to be careful as they read their papers—to identify misinformation, bad information, disinformation—and then to use that to help judge whether the story that’s before them is truthful or not.”