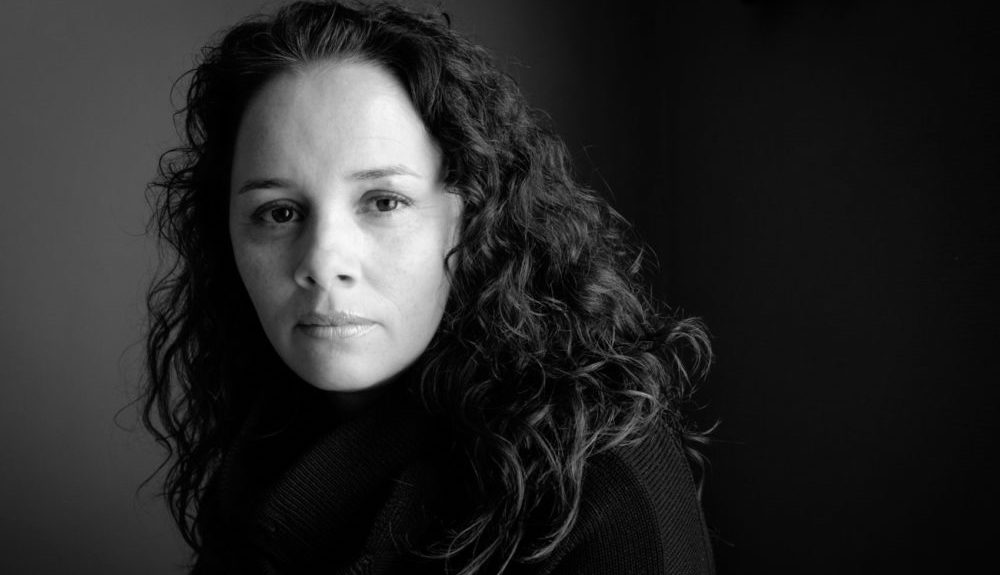 Award-winning writer and playwright Larissa FastHorse will join the National Writers Series on Tuesday, November 17, for a virtual Traverse City event to discuss her contemporary satire, “The Thanksgiving Play.” The play was originally published in 2015 and is available for preorder at Horizon Books with a 20% NWS discount.

This virtual event is a partnership between Parallel 45 and the National Writers Series. Parallel 45 is performing a virtual staged reading of the award-winning play—tickets cost $8–12—followed by a National Writers Series interview with Larissa Fasthorse. Guest host for the event is Cynthia Canty, an Emmy award-winning radio and television journalist, and former host of Michigan Radio’s “Stateside.”

The journey has only just begun for indigenous playwright Larissa FastHorse. A member of the Sicangu Lakota Nation, FastHorse lived her first life as a professional ballet dancer and choreographer before injuries forced her into early retirement. So, she followed a long-held love of writing all the way to Universal Pictures and Paramount, where she worked as a creative executive, before being commissioned for her first play, “Average Family” (2007). She hasn’t stopped writing since. Now an award-winning playwright and performing arts advocate, FastHorse’s litany of credits include “What Would Crazy-Horse Do?,” “Urban Rez” and the inspired satire “The Thanksgiving Play.”

In addition to her writing endeavors, FastHorse has also served as a delegate to the United Nations in Geneva and is the co-founder of Indigenous Direction, an organization that advises performance projects on Native issues. She’s been distinguished by both the National Endowment for the Arts and The Sundance Institute and is a 2019 recipient of the PEN/USA Literary Award for Drama. Last year, her New York debut, “The Thanksgiving Play” (2015), made headlines as one of the 2019 season’s top 10 most-produced plays in America; and FastHorse made history as the first Native playwright on the list. FastHorse was also recently awarded a MacArthur Foundation “genius” grant.

“The Thanksgiving Play” surrounds four ‘woke’ teachers, who’ve been given a nearly impossible task: Create an elementary-appropriate Thanksgiving play, that is both seasonal and historically sensitive. The only catch? All four of them are white. To keep their cultural biases in check, they hire an indigenous actor, hoping her firsthand experience with Native customs will keep their text from toeing the line. But, the joke’s on them when they discover their guide is keeping a game-changing secret: She’s no more a native than they are.

Propelled by FastHorse’s comedic mastery, “The Thanksgiving Play” dives head-on into the misleading myth of the Pilgrims and Native Americans bonding over a shared meal. For FastHorse, however, misrepresentation in contemporary culture is simply the name of the game. A child of rural South Dakota, FastHorse didn’t hear the typical Thanksgiving tale until she was already knee-deep in writing research. Instead, her holiday was more about harvest, gratitude and giving thanks for family. Consequently, much of her writing undertakes to “translate” the traditions and experiences of indigenous people for an audience that’s often predominantly white.

“The Thanksgiving Play” in particular, is the product of FastHorse’s own frustration with the longstanding—and arguably, outdated—infrastructure of American theater. The author of several other Native-centric screenplays, much of her previous work has included roles intended for indigenous actors; a challenge most casting directors simply can’t meet. In response, FastHorse flipped the script—literally—and cast a stark-white company for “The Thanksgiving Play.”

The irony isn’t lost on her audience, either. Instead, FastHorse’s role-reversal casts a conspicuous spotlight on the continued struggles of indigenous people, and the steps that making real progress requires. But, don’t be fooled by the theatrics: This is exactly the outcome that she intended. As FastHorse herself has been quick to point out, while theater itself won’t change the world, if there are people behind it, maybe it could.