The Ever-Evolving Story of the National Writers Series 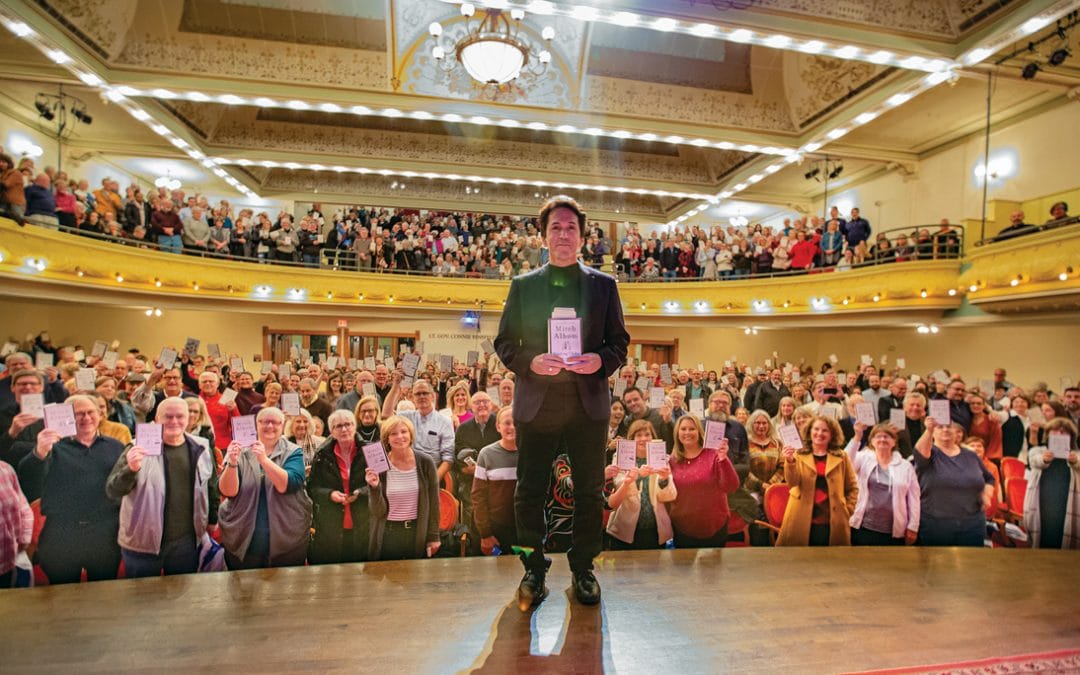 All this started back in 2009, when my husband, Doug Stanton, was on a national tour for Horse Soldiers, a book about a dozen soldiers riding into Afghanistan shortly after 9/11. They joined forces with Afghan soldiers and defeated the Taliban, although the victory was short-lived. The book was a hard one to write, and took both of us to finish it. We decided to throw a big party to celebrate.

I was working at Northern Express at the time, but with the help of my friend Paulette Parsons, we pulled together an event at the City Opera House in Traverse City. We persuaded a friend to design a poster, and Doug’s mom put them up all over town (which she ended up doing for years in all kinds of weather). We talked area wineries and the amazing Cooks’ House and others into donating wine and excellent food. And on May 28, 2009, we packed the house—nearly 700 people showed up.

Doug invited someone he’d written about in the book, Mark Mitchell, a US Army major, who’d fought in a 2001 battle. I remember Mark standing onstage and talking about what he was feeling and thinking during this intense period. He and a small group were fighting Taliban soldiers inside an ancient Afghan fort; a bomb exploded and nearly killed some of Mark’s friends. Mark choked up, and suddenly Doug’s book seemed more real than it ever had. The emotion in the auditorium was palpable. We all seemed to feel the dust, the anxiety, the heat, the fear. No longer did the Afghan war seem like a faraway story. You were there, in it, aware of the humanity and inhumanity of war.

Doug proposed doing an event like this again, to bring nationally renowned authors on tour to Traverse City to discuss their new books. (Ten years later, the National Writers Series has brought more than 100 writers to TC, creating one of the most unique and consistent author and audience experiences in the country.) Grant Parsons, our good friend and the third NWS co-founder, agreed. But he wanted to make it something more—to use event proceeds for scholarships and youth literacy. And so, we have. Each year, we give $4,000 in college scholarships, engage hundreds of kids in Battle of the Books (a reading competition), teach poetry workshops at Traverse Heights and Blair Elementary schools, hire a teaching fellow for Front Street Writers (a magnet program at the Career-Tech Center), bring our mainstage authors to speak to students and partner with NMC in offering creative writing workshops. We also publish the NWS Literary Journal that showcases student work and is available at Horizon Books.

This past school year brought a serendipitous surprise. Horse Soldiers included an account of CIA intelligence officer Mike Spann interrogating pro-Taliban prisoners in Afghanistan. Unbeknownst to him, some of the prisoners had hidden weapons underneath their clothing. In the space of a few minutes, the men attacked and killed him. Mike left behind his wife, Shannon, and their five-month-old baby, Jake. Fast-forward to 2019. Shannon, who had since remarried, and Jake were living in Traverse City. Jake, a talented and passionate writer, heard about Front Street Writers and signed up—a decision that his mom called “life-changing.”

Simply put, the National Writers Series shares the power of storytelling. Each of the more than 165 conversations—whether Margaret Atwood, Ann Patchett, Alice Waters or Harlan Coben—has been unique. But with each event, there comes a deeper understanding of issues and each other. Our events have drawn thousands of people to downtown Traverse City throughout the year. Now with our virtual events, people from around the world Zoom in, and we’re still averaging some 400 people per event!

Along the way, Traverse City was officially named Book City in honor of the community’s love of books. NWS would never have made it this far were it not for our generous donors, sponsors and thousands of attendees. We at NWS are more than grateful. We’re astounded! It’s been quite a party.

This fall, NWS will continue to host virtual events due to COVID-19. View the full lineup and register for the free events at nationalwritersseries.org.