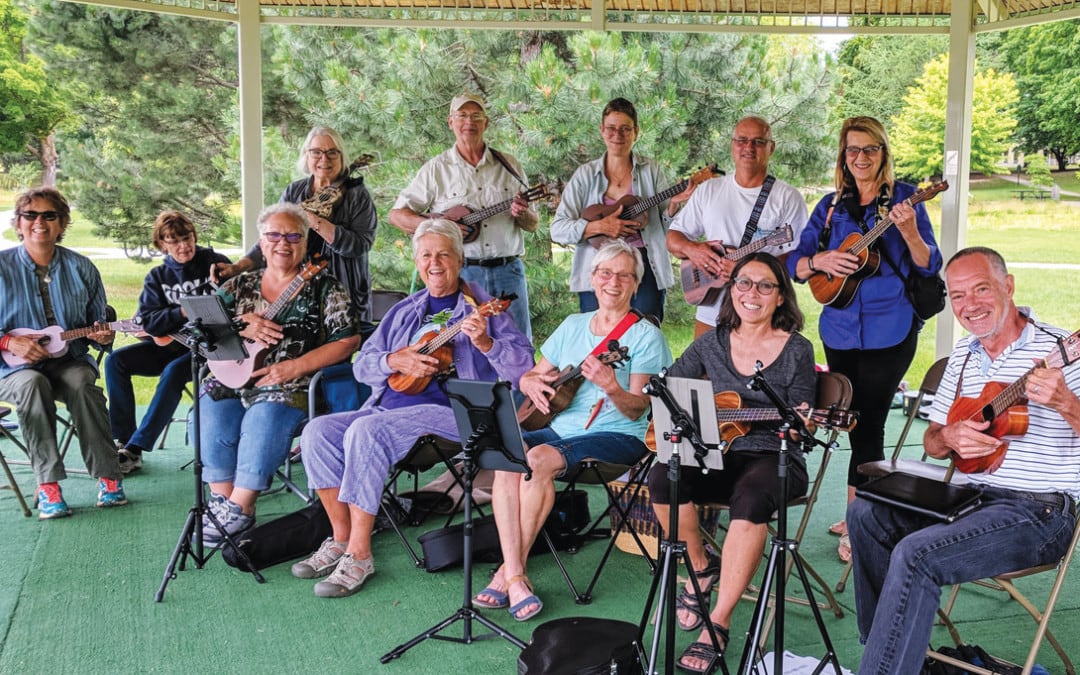 It doesn’t matter who you ask or how old you are: Playing the ukulele is F-U-N.

Elise Brooks, 71, from Thompsonville, can attest to that. She’s a member of the Society of Traverse Region Ukulele Musicians (STRUM) in Traverse City, and the local, home-grown group is about far more than learning how to play the instrument.

“No one in the group cares if you’re an accomplished musician or a beginner,” Elise says. “Everyone is learning more every week, regardless of their level. And the laughter … friendly people playing ukuleles—and even a few kazoos? You just gotta laugh!”

STRUM started in 2013 when Lake Ann resident Rachel Jones, 34, attended a music workshop in Michigan. She ran into a man who was trying to get ukulele groups started all over the state—enough so that people wouldn’t have to drive more than an hour to find one. He encouraged Rachel to start one in Northern Michigan.

“I had the summer off, and I liked to play, so I put up flyers,” says Rachel, a school psychologist for elementary schools in Benzie. “I met other people. And if you want to laugh, join a ukulele group!”

Typically, STRUM meets the third Wednesday of every month at 7 p.m. at The Grand Traverse Circuit in Traverse City, a cultural arts and education center. But since the pandemic, the group has been meeting online every Wednesday at 7 p.m.

“It’s been great fun online,” Rachel says, “as at least half a dozen of us have written parodies or songs about being in quarantine.”

After running the group for a few years, Rachel handed the reins over to Bryan Boettcher, dubbed the TC Uke Man. Bryan, 40, has organized the group since, helping transition the group online and getting sheet music up in shared Google Drives for all to see.

They are actually playing together more after Bryan created a 24/7 online meeting link, where they can jump on anytime, and often do. They have also added a special “Open Mic Night” at 7 p.m. on the third Wednesday of every month online, where folks can sign in and take turns sharing their own songs or leading ones they choose.

On regular Wednesdays, a member is chosen to pick and lead a song, or the group might learn and play a brand new song together. During play, one member has the “floor,” so to speak, while the others mute their mics. They are playing alone, together.

“Bryan organizes and leads most of our gatherings,” says Gwen Foor, 63, a long-time member who moved to Washington last year but has now been reunited with the group online. “He does a fantastic job helping those who need it and challenging us to learn new chords, songs and strum patterns.”

Bryan estimates there is a core group of 15 to 20 members but says attendance fluctuates, with more than 100 players attending over the years. Some come just once a year for the annual STRUM Anniversary party in August, while others try to make every meeting.

“We play popular songs or write funny parodies of popular songs,” Bryan says. “The ukulele is a very accessible instrument with soft nylon strings that are easier on your fingers than guitar strings. It’s portable and totable and lighter and brighter than a guitar.”

He says he leads STRUM from a position of, “You can pick up this instrument right now and start.” “I always treat it as if we are a group of beginners, always learning,” says Bryan. “Our mission is to share the joy of music and the ukulele.”

STRUM performs at events such as area festivals and local libraries. One of Rachel’s favorite stories is when a two-year-old boy checked out a ukulele from the Traverse City Area District Library and joined the group on the spot. “He was definitely our youngest member, and his parents ended up bringing him to more meetings!” Rachel says.

Oh. And there’s one more thing: The STRUM Sisters is a group of four women (two in their 60s, two in their 70s) who decided to meet outside the group and start their own little band. “The STRUM Sisters really warms my heart,” Rachel says. “I love that they have that relationship now because of the group.”

Both Gwen and Elise are part of the STRUM Sisters.

“We meet every week, learn new songs, share favorites and work on harmony singing as well,” Gwen says. “It has been an absolute joy!”

The STRUM Sisters have played at nursing homes, family reunions, barn dances and even for TC’s Veterans for Peace rallies several years ago around the International Peace Day celebrations, Gwen says.

Five years ago, Elise pulled her guitar out of the closet after about 30 years and was relearning how to play it via online videos. “But playing all alone in the guest bedroom isn’t as much fun as playing with others,” she says. “I bought a uke, joined STRUM, and am surprised at all the good people and experiences that have come my way since then, like the STRUM Sisters!”

The group hopes to meet again in person and resume performances soon. Until then, they are in harmony online.

For more information on the group, reach out to Bryan at [email protected]