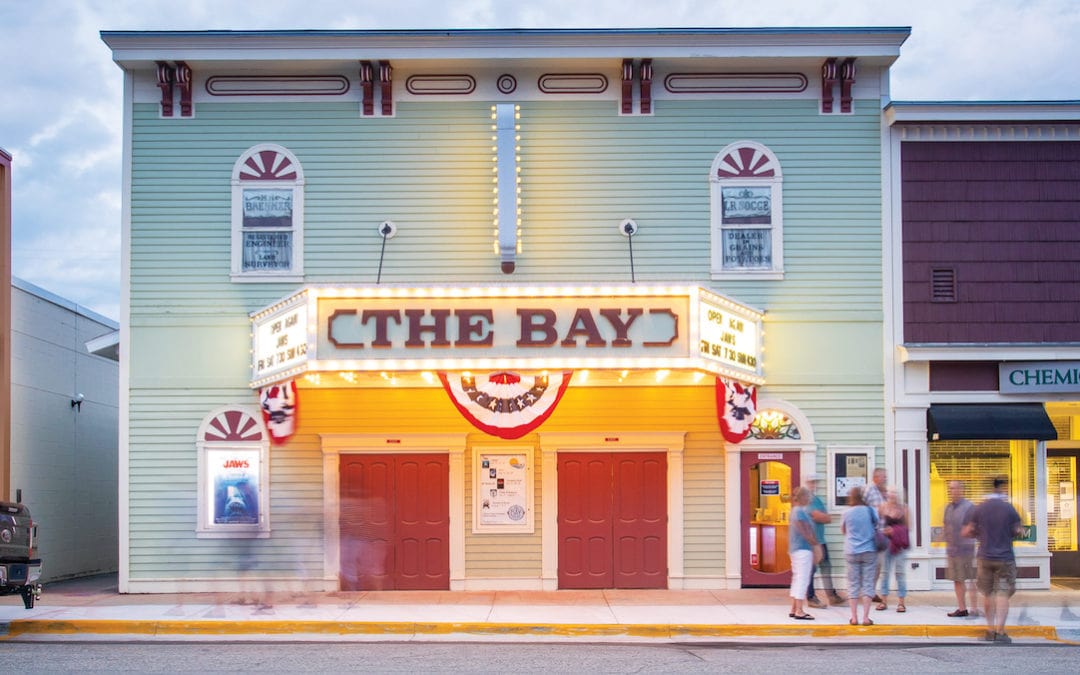 As other Up North communities have done, Suttons Bay residents recently rallied to keep their vintage theater from going dark, and the tradition of downtown movie-going has never held more promise.

A dancing frog was singing “Hello my honey, hello my ragtime gal,” Gloria Swanson was on the big screen and ladies were being asked to remove their tall feathered hats when The Bay Theatre first became a community gathering place in downtown Suttons Bay.

But an early ad that read, “You are missing part of your life if you don’t attend the movies,” is as timeless today as it was when the theater opened in its current location in 1946. That was made clear when the theater’s long-time owners announced in December 2018 they would be closing, and the community decided that couldn’t happen.

Today, in the circa-1946 building with its pastel-painted storefront and classic marquee, the nonprofit Bay Community Theatre is drawing full houses to its fun mix of first-run, summer blockbusters and indie flicks. The community donated enough money for the purchase of the theater, and volunteers help plan programming and serve up the popcorn, craft beer and welcoming smiles.

“When we got into this, our small group said, ‘This is a really important institution in our little town. It’s the only theater in the county. We don’t want to lose this,’” says Rick Andrews, president of the Bay Community Theatre Board of Directors. “Turns out a lot of people feel that it adds to their quality of life to be able to go into town, have dinner and see a movie. People are really happy.”

The Bay morphed from commercial theater to a nonprofit in 20 days, and the group made sure against all odds that the theater wouldn’t go dark in the transition time.

“It was Dec. 11, 2018. That was the day the Bahle family (the long-time owners) stood upon the stage of a packed theater and officially announced, ‘We’re closing.’ It was amazing—the turnout and excitement at the end of that meeting,” Andrews says. 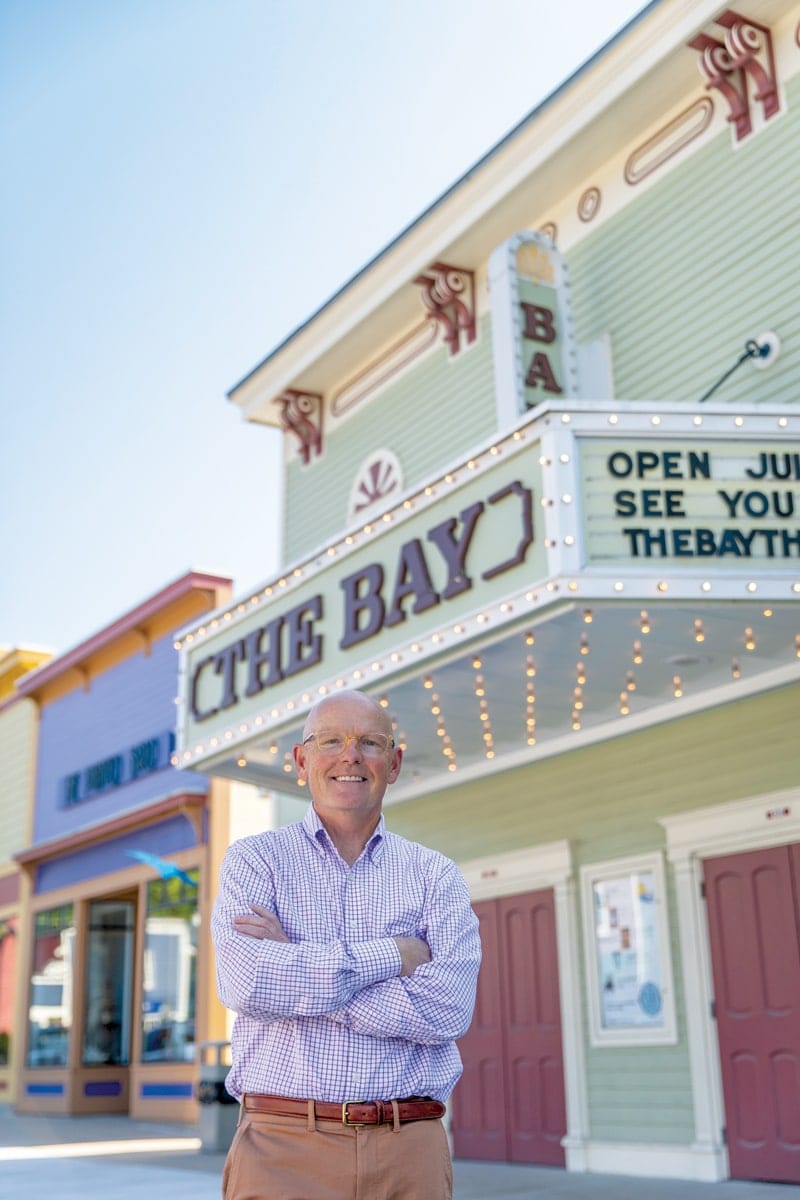 “A group of us gathered at the front of the stage. None of us knew one another, but we said, ‘Yeah, I’m willing to put in the time. By December 31, we had a lease, an operating agreement and a nonprofit,” Andrews continues.

“It was very fast, but we said we’d rather keep the lights on even though we don’t know what we’re doing, and stumble our way through.”

What they stumbled upon was a formula for success, with attendance that first year up 45 percent over the same time the previous year.

Finding the right mix of movies was key, Andrews says—something a programming committee now decides through a mix of “art and science” in conjunction with a professional company that selects movies for small independent theaters. In the warmer months, the theater’s target audience is vacationers—many of them families with children. In the tourism shoulder seasons, the target audience is an older, highly educated crowd accustomed to the type of cinema offered through the theater’s long-time Beyond the Bay film series of independent and foreign films.

The connections brought by the resort community’s full- and part-time residents have paid off, too, in a not-so-traditional theater experience.

When “Toy Story 4” premiered in town the day before its national release, star Tim Allen (a long-time Leelanau summer resident) was in the audience playing host. The showing of “Framing John Delorean” included a Q&A with one of the car company’s chief engineers and the editor of Car and Driver Magazine and the writer of a Hemingway film was in the audience to share the film’s backstory. And if those watching “A Beautiful Day in the Neighborhood” were wondering if Tom Hanks’ portrayal was true to Fred Rogers, they need only ask. A long-time friend of Rogers was on hand to speak.

“At the end of the day, you can see movies in all kinds of places, but having someone there to share the context adds so much more texture and value to the film you show,” Andrews says.

As it evolves, The Bay will continue to add concerts, lectures and other events to the movie lineup, but showing great films will remain a focus with speakers on hand if circumstances allow. Future expansion to the adjacent building now housing a branch of Chemical Bank is an option too, with rental income currently offering an important revenue stream.

This summer, the focus was on safe fun. The theater opened to a maximum of 50 people per movie (a quarter of its capacity) with a seating plan not unlike table reservations. A party of two got a “two-top,” if you will, or bundle of two seats together, a group of three a bundle of three seats, and so on. No theatergoer had anyone seated in front or back of them or to their left or right.

Since Hollywood delayed the release of its typical summer blockbusters to a later time, The Bay focused on offering classics along the line of “E.T.”, “Jaws” and the like, for $3 a ticket.

“We said ‘let’s be a point of fun and enjoyment of life at this point when it’s been a tough ride for a lot of people,’” Andrews says.

Catch a Flick at a Downtown Theater

Here, it almost doesn’t matter what’s on the screen, for there’s story enough in the purple (reclining) seats, 10,000 sheets of gold leafing and 11 large-scale murals representing stories told in Greek mythology. Go, too, for the over-the-top retro fun of the space and the creative cinematic lineup.

This theater’s Art Deco theme was a controversial contrast to the Victorian architecture of the rest of Manistee’s River Street when it was built in 1938. It was described as “ultra-modern” and “luxuriously fitted with every convenience.” A community initiative to restore the theater as a nonprofit and again light up the neon marquee has sparked a downtown renaissance of new businesses, cafes and restaurants in the Victorian Port City. Visit for first-run movies, 25-cent family matinees or Wednesday morning classics.

The interiors are as poetic as the name of this nonprofit with three theater spaces of varying sizes in one building—one focused on current films, another on classics and the third on foreign films and documentaries. Artists, architects and even an expert on the stars were enlisted in the restoration, and the result is that one theater captures the feel of being in a west-moving boat along a bluff and another mimics the ride in a railcar, the way vacationers reached Northern Michigan in the 1920s, the theater’s heyday.

At this 300-seat downtown theater, you might find an entire film festival lineup (they hold several) on one visit, at another, the film portion of a “dinner and movie” pairing with nearby Stormcloud Brewing Company. Beer and movie combos are popular, too; watch the website for dates when you get a beer token (for a beer paired with the film’s theme) with your already reasonably priced movie ticket. It’s also worth the visit to the theater, originally built in 1923, for the art deco touches and restored murals.

This theater was built to recall the style of the magnificent theaters of Detroit when it opened in 1920 with the film “Pollyanna,” complete with a trap door on stage and an elaborate system of ropes and pulleys that controlled the curtains for live performances. In front, an orchestra played along with the silent films of the day. Today, you see some of that magic in the restored front lobby.

Charismatic theater owner and former village president Joe Yuchasz is almost as much an institution as this downtown cinema that opened in 1940. Ask him the story of the restored Art Deco beauty, and also be sure to look up. This theater, with updated sound and projection systems, is also home to the largest “black light ceiling mural” in the world, the painting of a green forest of trees circling a sea of blue created by artist Robert Spinner for the theater’s opening. It’s still lit by six custom-built sconces.