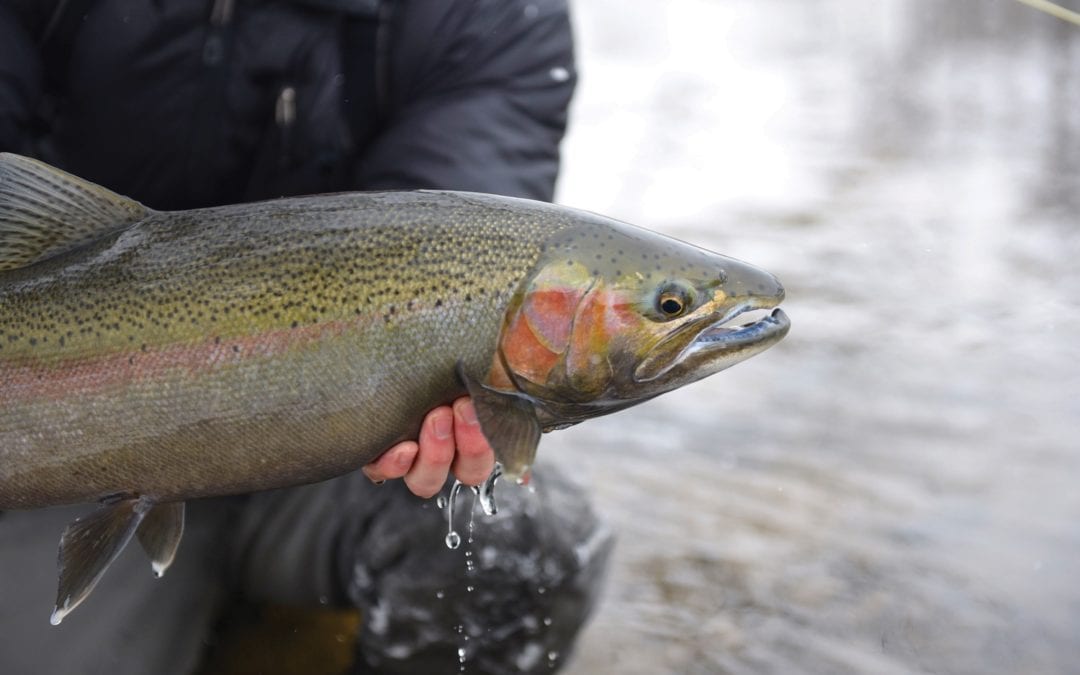 With the salmon runs done for the most part in Northern Michigan, steelhead fishing should be picking up, especially with any increase in water levels due to rain. Pier anglers and those surfcasting are getting a few. The fishery should continue until it gets too cold to fish.

Harbor Springs: Those targeting perch have found some fish.

Petoskey: Had no boats out. The dock at the city boat launch has been pulled for the season. A couple anglers were casting or fishing spawn from the piers, but effort has really dropped. A couple lake trout were caught, but the season is closed. The Bear River had higher water levels. A few anglers fishing at the dam caught small Chinook, a few coho or lake trout. To clarify, the lower boundary of the Bear River is the last footbridge. Above this footbridge, lake trout season is open.

Charlevoix: A couple boats fishing for perch just off the township launch near the cement plant caught a couple keepers when using minnows. Perch fishing should improve in the coming weeks. There was no activity in the channel. Medusa Creek has a few older salmon. The fence, which blocks the creek near the weir, was removed so it is open to fishing once again.

Traverse City: Cisco fishing was good for those jigging or trolling. Bass fishing has been very slow, with most anglers maybe getting one or two per trip. On the Elk River, the occasional steelhead and lake trout were starting to show up. In the West Bay, the dock at the Clinch Park launch has been pulled for the season. Perch fishing was good out of Northport. In Suttons Bay, catch rates for perch were poor.

Frankfort: This will be the last report for this area for the season. Steelhead fishing has been steady for pier and shore anglers. Those using spawn are reporting good days and slow days, as the waters were cloudy due to strong winds. Most say it is still worth the time to fish the area.

Onekama: Those fishing the north shoreline with fresh spawn are getting a couple steelhead when the weather permits.

Portage Lake: Had a few anglers venture out, and they did manage to catch a few perch on wigglers and worms.

Manistee: Fishing was generally slower, but some days were still decent. When pier and surf anglers could get out, steelhead and small coho were caught on fresh spawn. Some also caught a couple lake trout or whitefish.

Manistee River: As the salmon runs are winding down, steelhead fishing should pick up soon, especially with the increase in water levels.

Ludington: A couple steelhead and coho were caught on spawn by pier anglers and those surfcasting. At the state park, fishing was slow on the Sable River.

Pere Marquette River: Salmon fishing is winding down. A few fish are still being hooked, but most are in bad shape.

Keweenaw Bay: Mixed weather brought in mixed bags of fish, as those who got out were rewarded. No limits, but they did catch lake trout, steelhead, splake, coho and the occasional Chinook. A couple boats jigging for lake trout found fish on the bottom.

Marquette: Has seen a major cold front bringing snow to the area over the last few days, including some areas receiving over a foot of snow. Access points were ice- and snow-covered, but a few boats were still out and caught a couple lake trout at the end of the Lower Harbor breakwall and trolling to the green can. Those out for Menominee reported spotty catch rates. Pier anglers are targeting lake trout that are closer to shore for spawning. While some are getting no fish and others managed to get their limit, they are putting in a lot of time to do so. This is the time of year that many anglers continue to fish the breakwalls as well as the Carp and Chocolay rivers as they target lake trout through deer season. Some also fish late into November, targeting Menominee.

Little Bay de Noc: Angler participation has been low for several weeks. Most walleye anglers were targeting the reefs near Kipling when trolling a crawler harness or stick baits. Fish were found in and around 20 feet or deeper up to 35 feet. The “Black Bottom” was also producing fish when jigging crawlers or minnows along the weed beds by the east bank.

Manistique River: The Chinook run should be just about done. Any remaining fish were quite dark and in rough shape. The steelhead are there, and anglers have reported an increase in catches. Most are casting beads or flies near the rapids. The area closest to the dam is closed and posted “no trespassing” so most anglers have only gone as far up as the ORV bridge. Walleye catches tapered off a little, but fish were still being caught when casting crawlers and drifting the current.

Munising: The weather turned the past few days and was much colder, with highs in the 30s and snowfall. A few anglers fishing off the Anna River dock had no luck.

Detour: No anglers were fishing near the lighthouse or reef. Fair walleye catches were reported north of Detour around Sweets Point. Most were trolling crankbaits behind planer boards in 8 to 12 feet with baits 2 to 4 feet off the bottom. Chrome and blue or black and white were good colors. Bass anglers reported good smallmouth action around Sweets Point when jigging an orange and brown speckled tube jig in 4 to 6 feet off the rock piles and points.

Cedarville and Hessel: There were no reports of yellow perch being caught in Cedarville Bay or in and around the Les Cheneaux Islands. There has not been any effort for pike or walleye throughout the islands. Hessel had no fishing effort at the finger docks in the marina.