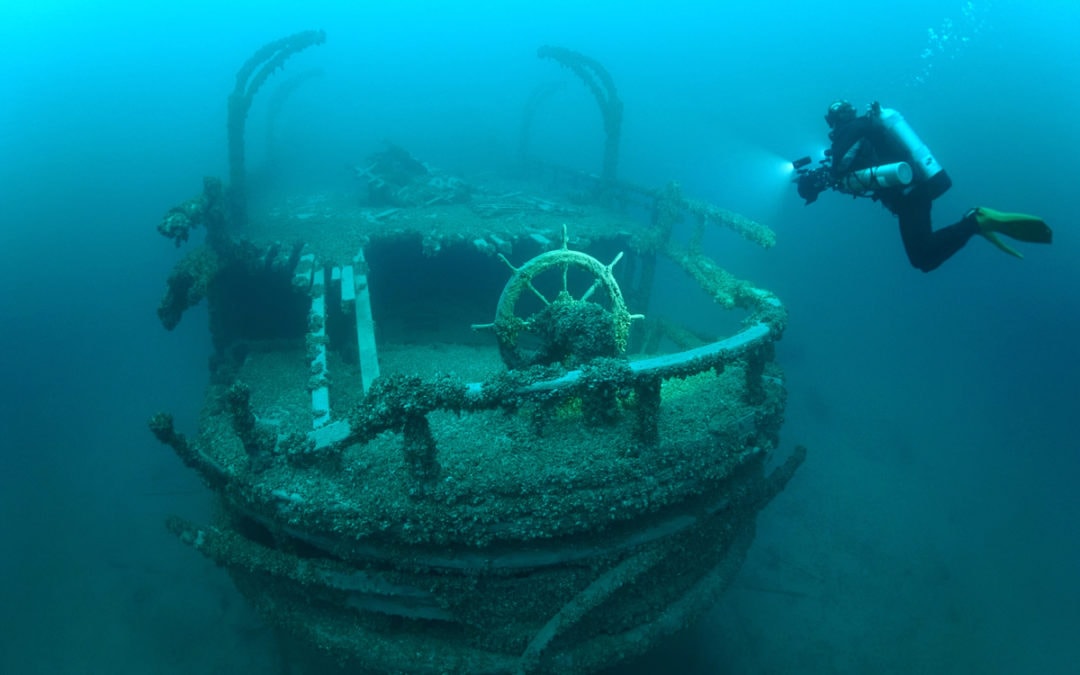 Traverse City resident Chris Roxburgh is an electrical contractor who owns First Class Wiring. He’s also a scuba diver and underwater photographer, known for the beautiful images and videos he takes of Great Lakes shipwrecks—and for diving in all four seasons, even under ice.

How many shipwrecks have you dived to in the Great Lakes?

I have dove on 68 shipwrecks so far and counting.

And how many more are on your bucket list?

I’m planning to dive every known wreck I can reach at a depth of 200 feet or less in the Great Lakes. So, a few hundred more. 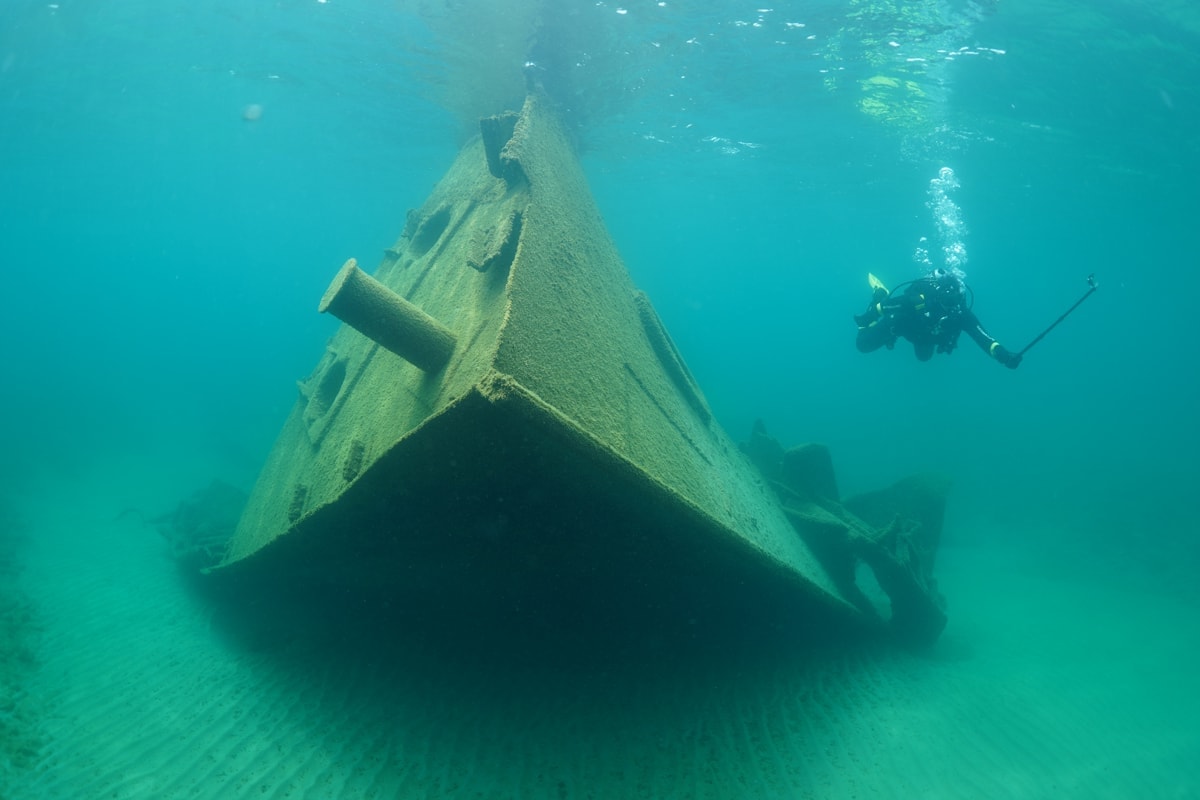 So far, what are your favorites?

Westmoreland, Frankfort, Lake Michigan, 200’: Westmoreland was amazing to see because of its story. [Legend has it she went down with a winter’s pay for the entire garrison stationed at Fort Mackinac—gold pieces that would be worth millions today. Read the full story of the Westmoreland.] The ship is intact—the wheel is in place, and the hogging arches are a sight to see.

Eber Ward, Straits of Mackinac, 142’: The Eber Ward is sitting upright and still intact with anchors on its deck. This ship is massive and you can see the giant hole from the ice chunk that went through her hull on the day she sank. There is a pair of boots in her bow and light illuminates her top floor through the windows.

Schooner Typo, Presque Isle, Lake Huron, 200’: The Typo is a ghost ship sitting proud 200’ down. With her masts standing tall, this schooner has its rigging in place and the bell can be seen on the deck. Her bowsprit is reaching out from the darkness with ropes attached, and the anchor is on her side.

Jane, Arcadia, Lake Michigan, 110’: The Jane is one of my favorite shipwrecks because it’s a mini freighter and only two ships like her were ever built. She sits upright and artifacts including the bell and anchor can still be seen. 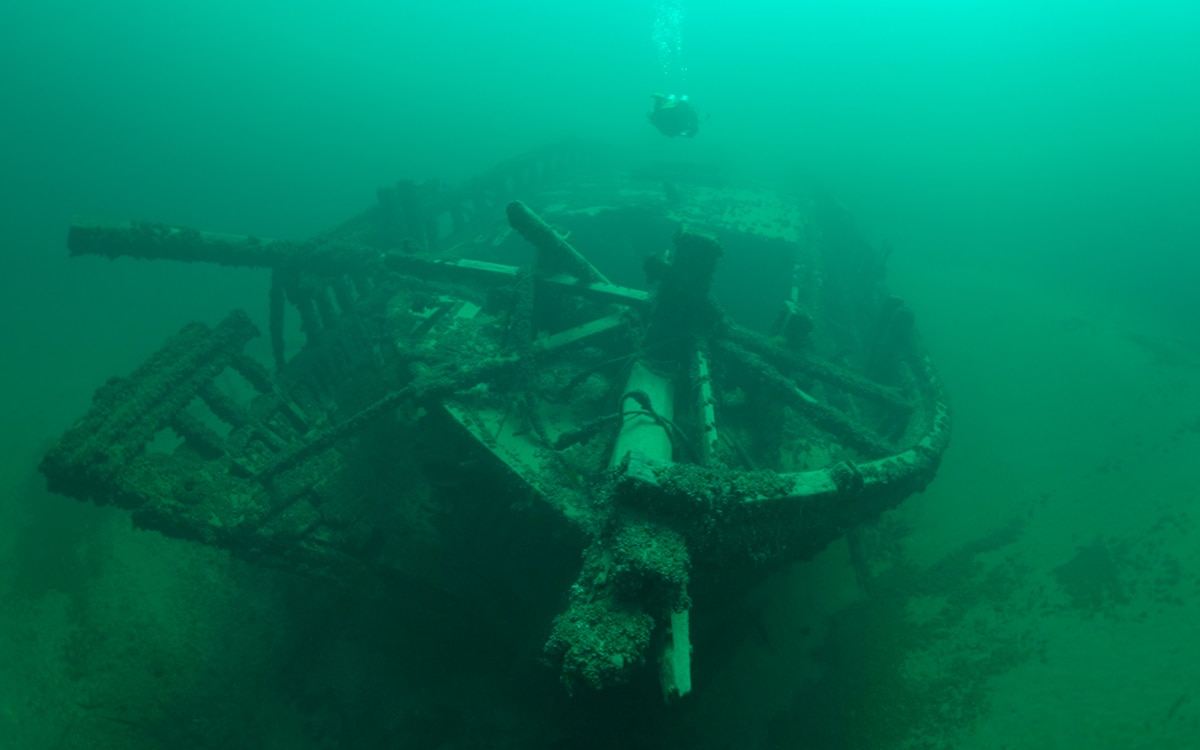 What’s it like down there, so far below the surface?

It’s almost surreal to see these ships deep underwater as they are frozen in time. I love to experience the history and see the wrecks as they looked before they went down. Sometimes it’s a bit eerie visiting an underwater wreck from the 1800s, knowing it was someone’s final resting place.

When diving a shipwreck, what rules should people be aware of?

The rules of wreck diving are to look and not touch or disturb anything; leave it as you found it. It’s illegal to remove things off wrecks.

Are you working with other divers or solo on any projects?

I’m working with my wife, Bea Roxburgh, on systematically documenting shipwrecks in the Great Lakes. I’m also currently writing a book called “Leelanau Underwater” that will feature shipwrecks around Leelanau County. [The book is now available for pre-sale. Follow Chris on Facebook for updates and awesome shipwreck photos.] 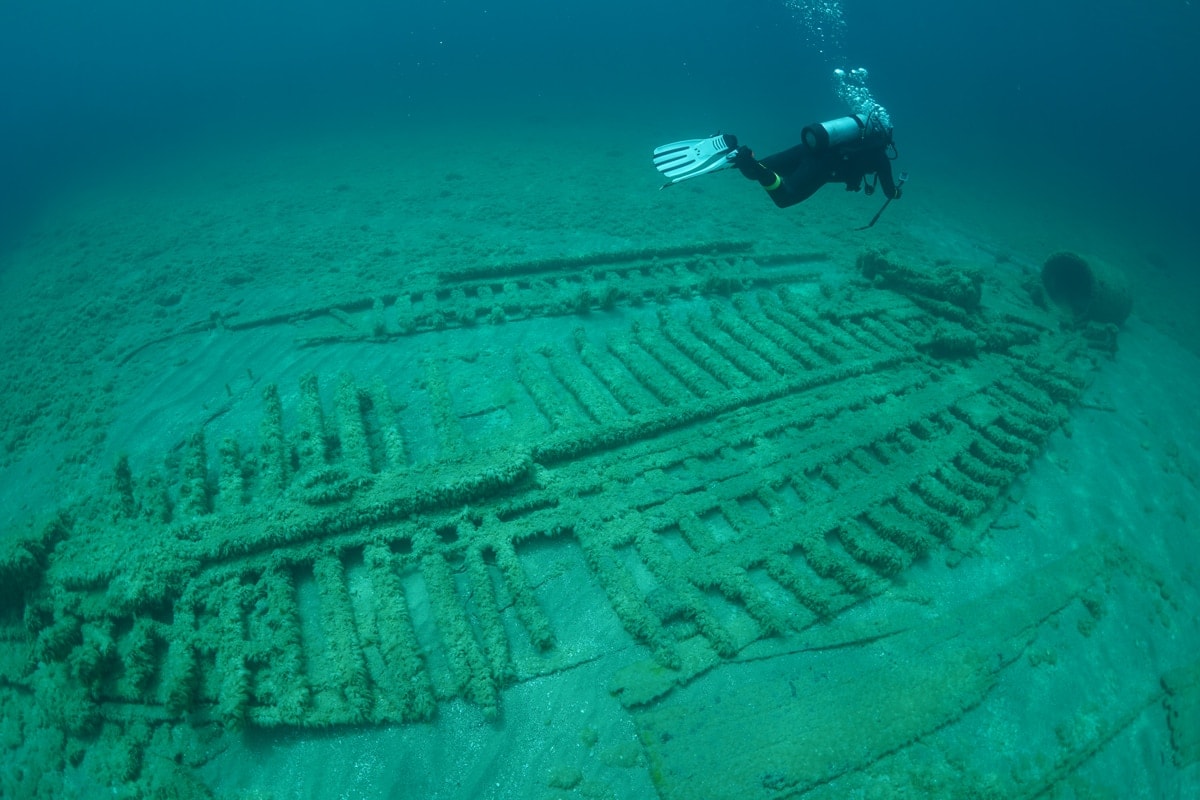 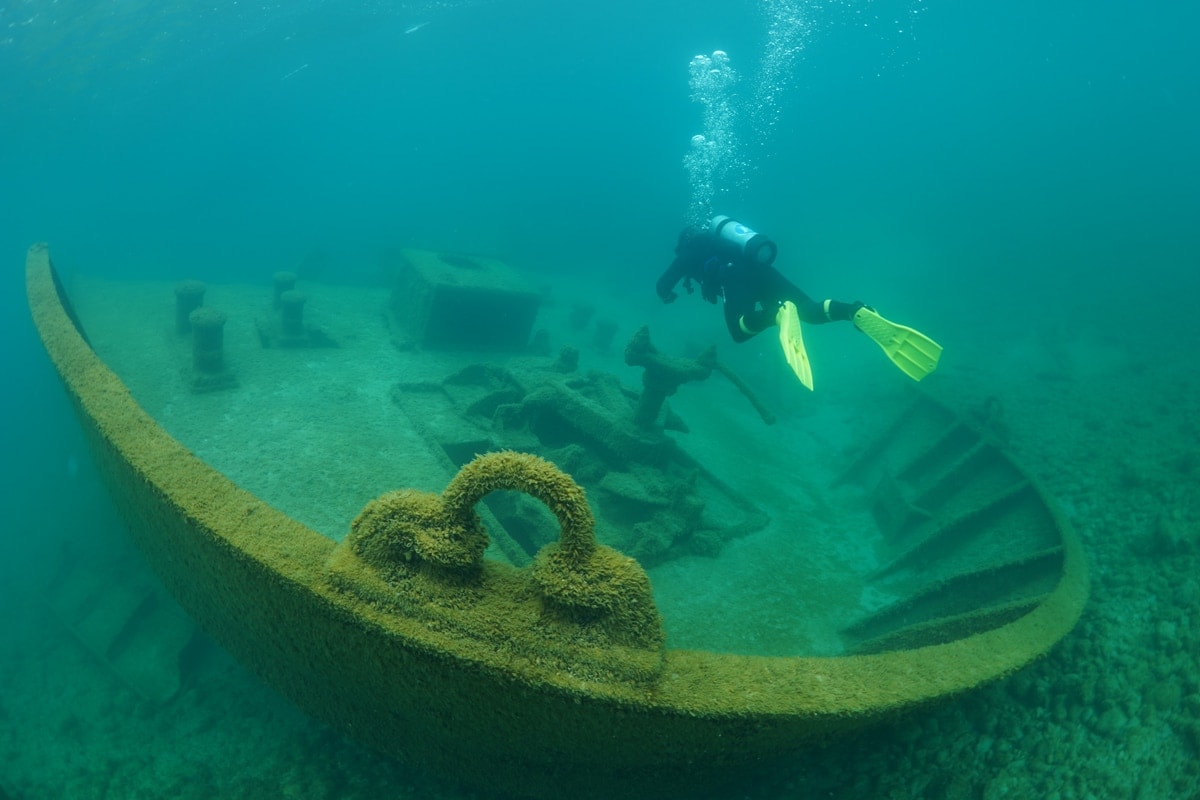 I read your article in Michigan Country Lines Magazine and you mentioned you’ve seen pollution, dumping and littering impacting the Great Lakes—what are some of the things you come across while you’re in the water?

I’m always finding garbage like plastics pollution, cups, wrappers, etc. and gather what I can during my dives. I was hired last year by the Detroit Free Press to work on a plastics pollution story that made national news.

Do you remember seeing trash and pollution when you were a kid, having grown up in this area?

When I was a kid there was not as much trash as there is now. We see thousands more people here in Traverse City now during our festivals and our busy summers, which makes for even more trash.

What’s one thing you wish everyone knew about the Great Lakes?

We have the best shipwreck diving in the world.

Anything else you want to share with our readers?

Let’s all enjoy our waters and do our part to help keep them clean by removing trash as we see it and do our best to leave no trace during beach and water activities.

Did You Know?: There are more than 6,000 shipwrecks in the Great Lakes, costing an estimated 30,000 mariners their lives, according to the Great Lakes Shipwreck Museum in Paradise. 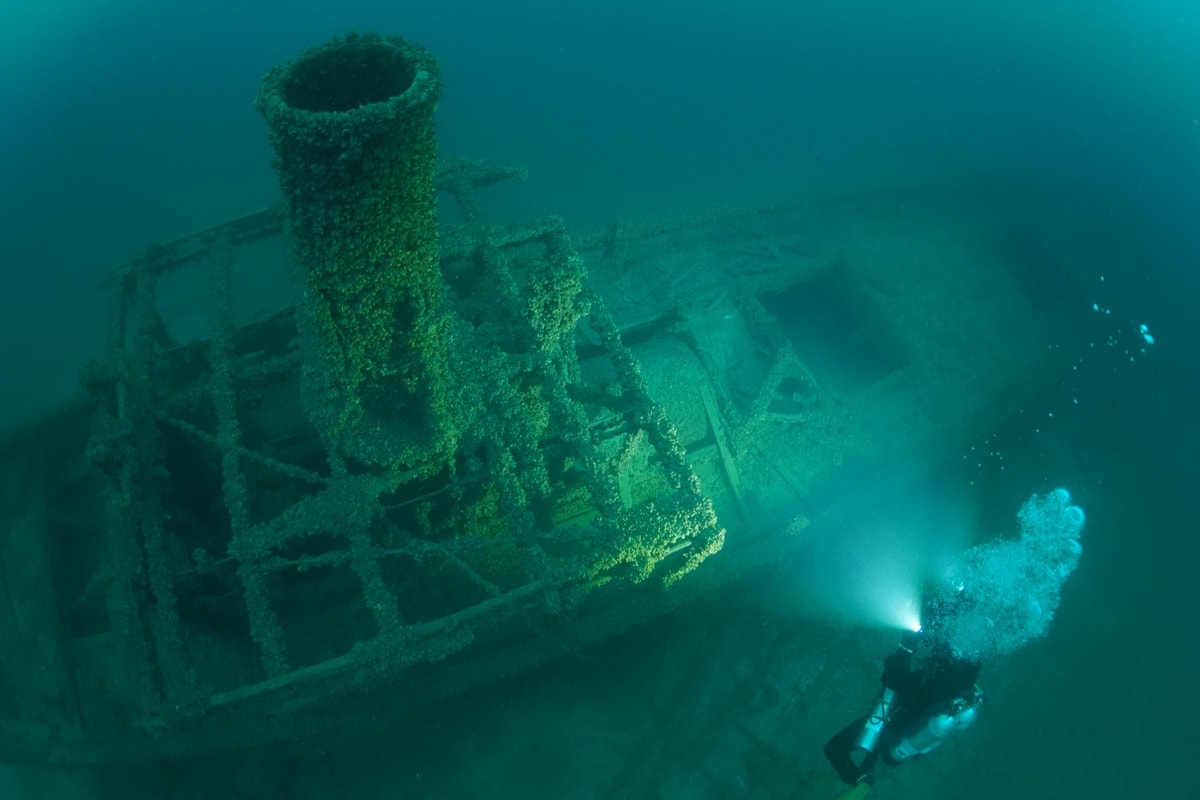