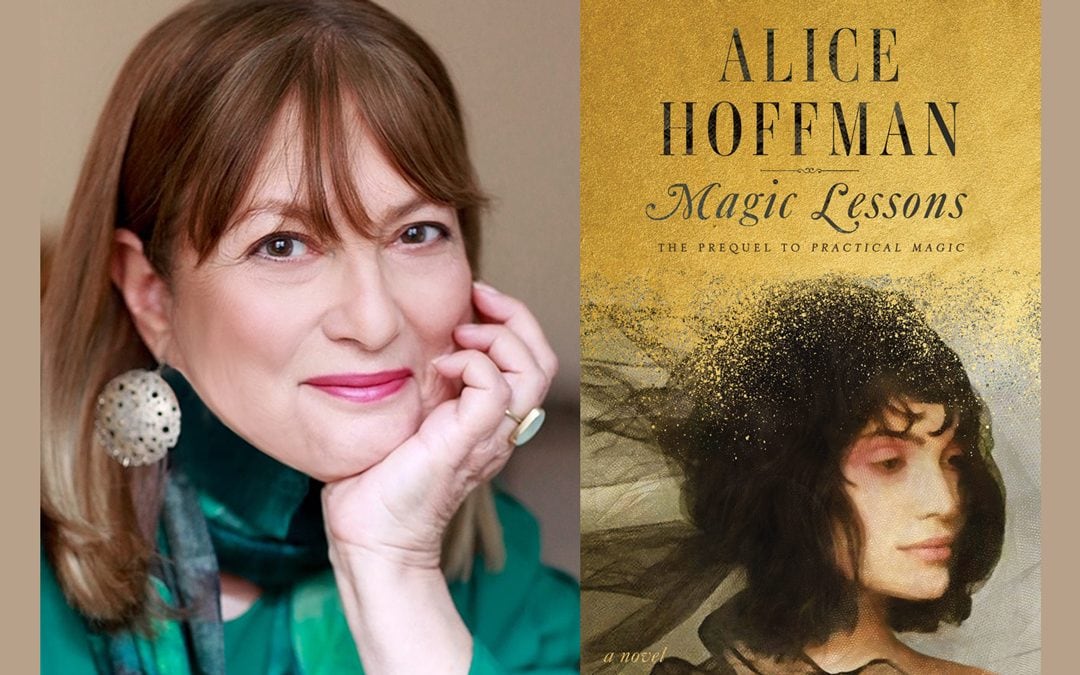 Master storyteller Alice Hoffman, author of “Here on Earth” and “Practical Magic” will join Traverse City’s National Writers Series on Thursday, October 29, beginning at 7 p.m. to discuss her newest novel, “Magic Lessons.” The book was published on October 6 and is available for preorder at Horizon Books with a 20% NWS discount.

This is a free, virtual event. Register here. Guest host for the event is Cynthia Canty, an Emmy award-winning radio and television journalist, and former host of Michigan Radio’s “Stateside.”

What’s the fastest route to female empowerment? If you ask award-winning author Alice Hoffman, it isn’t protest, or even politics; instead, power comes from the pen. “If you have words, you have power,” she says.” If you can read, if you can write, you have power.” And Alice Hoffman is power personified.

An alumna of Stanford University’s prestigious creative writing program, Hoffman finished her first novel at the age of 21. But it was really her love of literature that set the frame for her career—both as a writer and as a woman. “I was a reader,” she says, “but when I was growing up, we didn’t even read women writers in school unless they were British or dead, so I didn’t think it was an option for me. I think being a reader makes you want to also do it, so I started out as a secret writer.”

Fast forward a few decades, and Hoffman’s literary empire has grown to encompass more than 30 works of fiction. This includes the instant cult-classic “Practical Magic” (1995), which chronicles a coven of witches. “I grew up reading magic books and magic theories,” says Hoffman. “I also grew up really interested in witches. That’s partially because the witch is the only female mythic figure with power, and I think that’s really attractive to both little girls and big girls.” Now a stand-alone trilogy in its own right, the titular “Practical Magic” series also includes two prequential novels: “The Rules of Magic” (2017), and as of earlier this month, “Magic Lessons.”

The earliest prequel to “Practical Magic,” “Magic Lessons” traces the Owens family tree all the way back to its spectral start. Set in the early 1600s, the novel follows matriarch Maria from the fields of rural England to Salem, Massachusetts, where the curse that will haunt her family for generations ultimately takes hold. But, don’t let the fantasy tag fool you; Hoffman’s sprinkled plenty of realism—including actual historical events, like the Salem Witch Trials and the Black Death—throughout her plotline. “I was always interested in the Salem Witch Trials,” Hoffman says. “[Puritan culture] really believed that women were evil—that they created sin, as Eve created sin.” As a result, 17th-century women were often illiterate. “If you’re illiterate,” says Hoffman, “you don’t have power.”

But, even more surprising to Hoffman than the reality of her research were its parallels to modern society. “Unfortunately, there are a lot of things that haven’t changed [since the 17th century],” says Hoffman, “and that was a surprise to me. The treatment of women in Puritan society is not so different from some of the things that are going on in America; women not having rights, and strong women being looked at as kind of dangerous—there were a lot of similarities.”

Still, Hoffman’s own story is far from finished—as is her fight for feminine power. “There are so few stories about everyday women,” she says, “and it’s still hard for women to tell their own stories.” So, Hoffman’s made her voice a vehicle for those that might otherwise stay silent. “I’ve always thought that a writer’s voice is like a fingerprint,” she says. “But I’ve realized in the past few years that my work is about giving voices to women who couldn’t tell their own stories. That, for me, is a really important part of what I’m trying to do.”