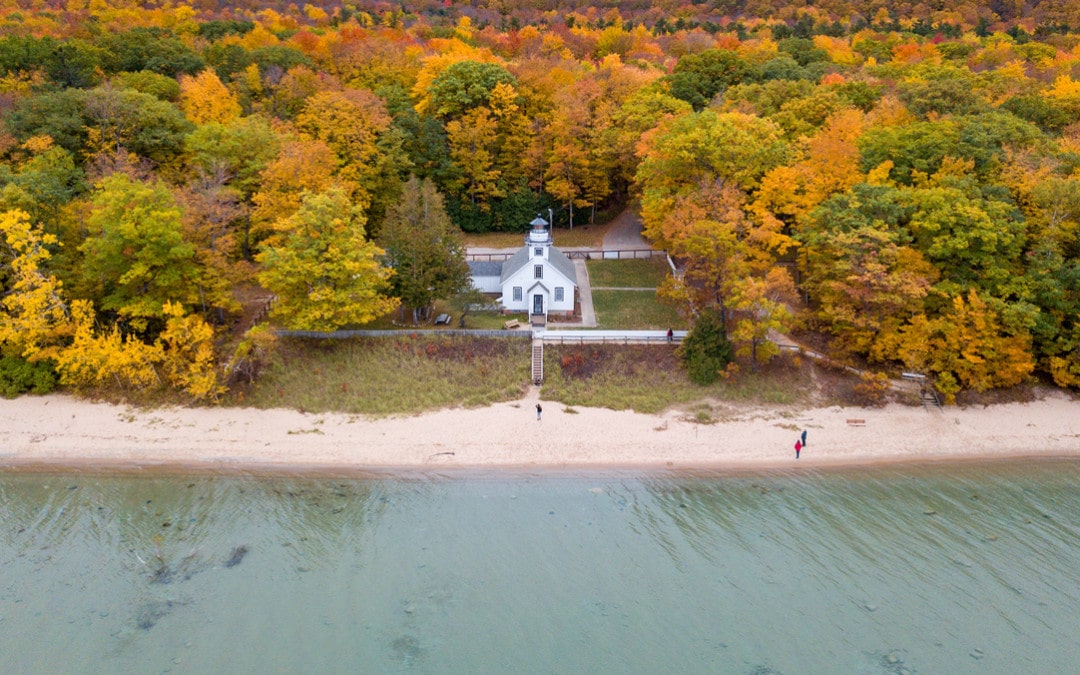 Three Great Lakes lighthouses. Three sweet shoreside towns. Pick one and make it a day trip, or spend a long weekend visiting them all on a Northern Michigan fall color tour.

Lighthouse Lore: McGulpin Point Lighthouse and its keepers helped ships navigate the treacherous waters in the Straits of Mackinac from 1869–1906. Emmet County purchased it from private owners in 2008 and extensively restored it, including replacing the light and its enclosed lantern room. The county also added a barn near the lighthouse with additional history displays inside.

One of the lighthouse’s most notable keepers, James Davenport, was transferred to McGulpin Point in September 1879, serving for 27 years until the station was discontinued. The following story was researched and written by Terry Pepper, a beloved lighthouse expert, author and former executive director of the Great Lakes Lighthouse Keepers Association, who passed away in 2019:

December 5, 1893, was a particularly eventful one at McGulpin Point when the wooden propeller Waldo A. Avery caught fire while passing through the Straits. By the time the vessel was off McGulpin Point, the fire was raging so badly that to save his crew, the captain steered the vessel toward the lighthouse at full steam. Keeper Davenport had left the station for Mackinaw City earlier in the day, and with the passing of his wife two years prior, his nine children were alone at the station. Accustomed to lighthouse life, the children were a resourceful group and prepared for the care of the survivors. Imagine the fear in the children’s hearts as they saw the crew members fighting for their lives on the approaching vessel.

Alerted to what was going on, Davenport rushed back to the station with a number of Mackinaw City residents. With the vessel’s lifeboat burned and unusable, numerous trips to the burning boat were made with the lighthouse station’s small skiff, until all 17 crew members had been brought to safety.

The Lighthouse Board officially authorized the discontinuance of McGulpin Point on November 12, 1906, and keeper Davenport climbed the stairs to exhibit his light for the last time on the closing of the navigation season on December 15 of that year. The station was boarded-up and the lantern and lens removed, with Davenport serving as caretaker for a few weeks until his transfer to Mission Point Lighthouse, where he continued to serve until his retirement in 1917.

View the Northern Michigan Fall Color Map to see when and where peak color will arrive.

Make it a Day at McGulpin Point

Visit: The lighthouse is open daily from May 15–October 31 (admission is $3 per person; children under 5 are free). There’s a view of the Mackinac Bridge from the tower, a gift shop, several picnic tables and a cottage next to the lighthouse that’s available for overnight rental. An approximately 0.1-mile Discovery Trail leads from the top of the bluff near the lighthouse down to the waterfront, with five stations along the way sharing the human history of the area, which dates back 9,000 years to when Native Americans lived near the water on what’s now called McGulpin Point.

Did You Know? Four hundred years ago, pilgrims arrived on the Mayflower in present-day Massachusetts, and Plymouth Rock became a symbol of American settlement. However, 405 years ago, when French explorers were traveling the Straits of Mackinac by canoe, they were using a rock at least five times the size of Plymouth’s as a navigational aid and also to gauge water levels. The little-known McGulpin Rock, which has a height of 9 feet and weighs 54 tons, has been used since at least 1615 by French explorers, and Native Americans observed it much earlier. Note: Due to high water levels in the Great Lakes, the massive rock is now nearly underwater. Only the top 10–12 inches are visible at this time from the beach at McGulpin Point.

Dine: Audie’s Restaurant has been serving guests since the Mighty Mac was built—desserts are always homemade and the whitefish is delivered fresh from the Great Lakes daily. Dine-in or place an order to go for a picnic with fall color views at Alexander Henry Park. The park has front-row views of the Mackinac Bridge, and at the beach, you can even walk underneath a portion of the 26,372-foot structure. Get There: Access the south pier from Lake Michigan Beach Park (95 Grant St.) in Charlevoix, or follow the sidewalk along Round Lake channel, located off downtown’s Bridge Street, where the Charlevoix Memorial Bridge crosses the channel.

Lighthouse Lore: The Charlevoix South Pier Lighthouse is thought to be one of the most photographed on the Great Lakes, for the simple reason it’s so easy to get to. “Seen against our million-dollar sunsets, it has to have been caught on camera millions of times over the past century,” says Charlevoix Historical Society Curator David L. Miles.

Today, three groups work together to care for the iconic lighthouse: it’s owned by the City of Charlevoix, maintained and preserved by the Charlevoix Historical Society and operated by the United States Coast Guard (the light and fog signals are still actively used for navigation).

When the Historical Society came on board in 2006, major restorations began—re-glazing the black lantern (it’s the original, believe it or not, David says, from 1885), removing an enormous amount of rust, replacing rotted walls and fixing other structural deterioration.

The Historical Society is also responsible for painting the lighthouse its now well-known fire-engine red. But, the lighthouse hasn’t always been red or located on the south pier. It actually began life on the north pier, made of wood and painted white (today the 1948 structure is fabricated from steel). When the lighthouse was transferred across the channel to the south pier in August 1911, it was painted red.

In 1968, by order of the federal government, the structure was again painted white. “There was a great hue and cry against it from the townspeople and resorters, but there was nothing they could do about it,” David says. Nearly 40 years later, when it came time to apply a fresh coat of paint in 2006, the State Historic Preservation Office mandated that it be the historically correct color from 50 years ago (red), or restoration funds wouldn’t be provided. That, in turn, made many people who had only known it as white, equally furious. 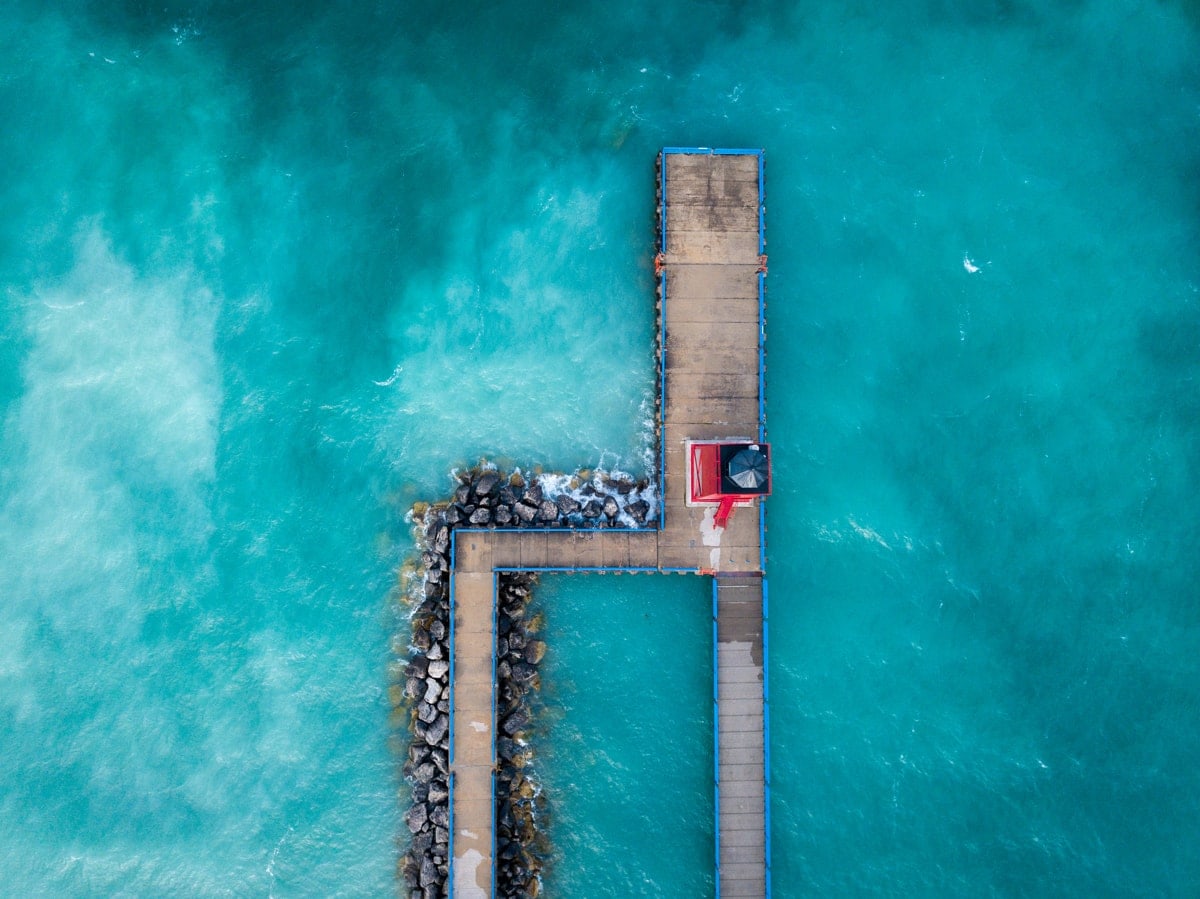 Make it a Day at Charlevoix South Pier Lighthouse

Visit: The lighthouse isn’t open to visitors, but the pier is. And, as we mentioned, sunsets here are incredible. Members of the U.S. Lighthouse Society Passport Program can get their passports stamped at the Charlevoix Historical Society Museum (103 State St.). Not a member yet? Join the club at uslhs.org and start collecting custom stamps when you visit lighthouses, museums and lightships across the U.S.

Did You Know? In the mid-1900s, one of the station’s foghorns was nicknamed Ferdinand, after the Walt Disney cartoon bull, because it’s rich BAAAAAAAH-boom reverberated across town and sounded like the bellowing of a bull. The current horn is “puny” in comparison, David says.

Dine: Cozy up to the bar at Bridge Street Taproom (202 Bridge St.). Comfort food reigns at this local pub with 32 taps: Melty mac ‘n’ cheese is served on sourdough sandwiches and hearty soups are made from scratch every day.

Hike: Soak in panoramic views steeped in red, yellow and orange atop Mt. McSauba, with mighty Lake Michigan as the backdrop. The four-season, 80-acre recreation area has a 0.7-mile trail loop that connects to more than half a mile of beach frontage and an 18-hole disc golf course (09223 McSauba Rd.). 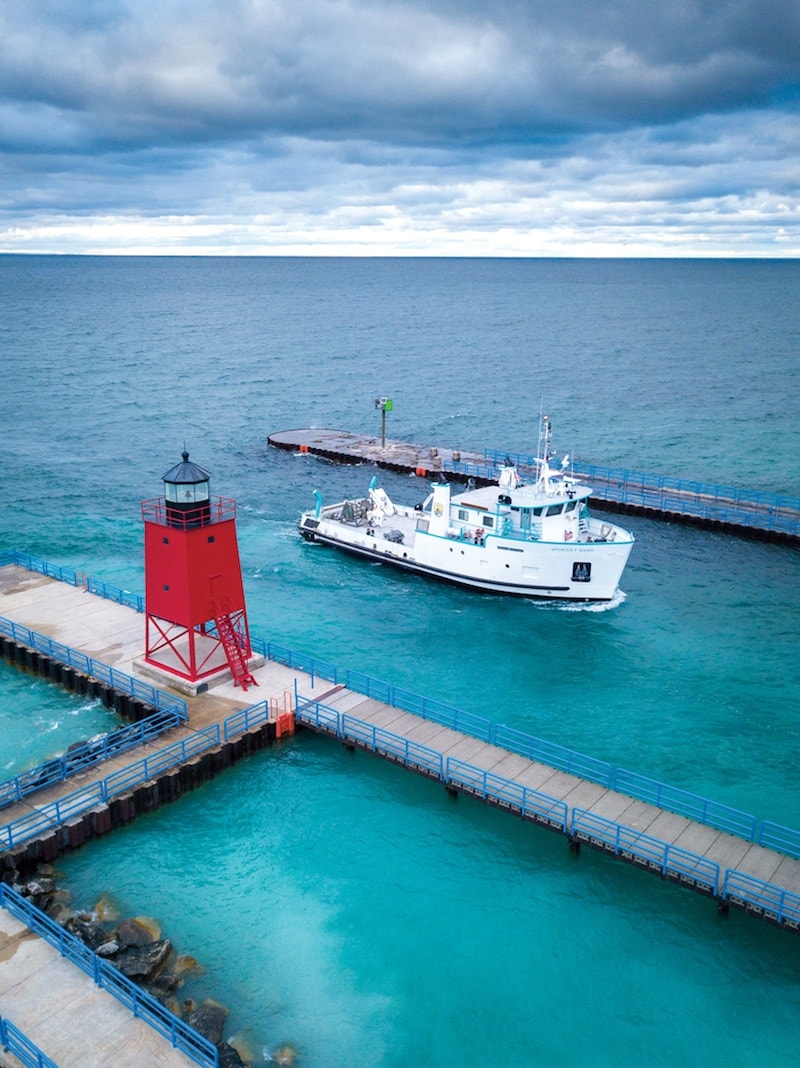 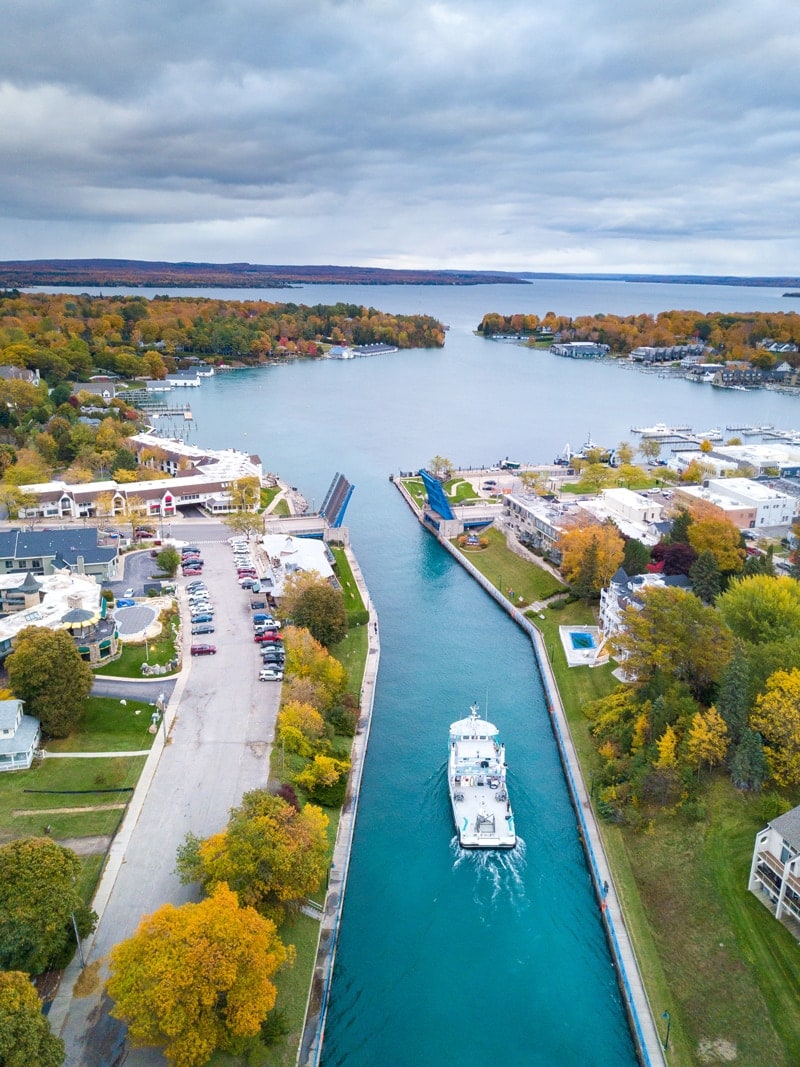 Get There: 20500 Center Rd., Traverse City // Mission Point Lighthouse is tucked on the tip of Old Mission Peninsula. Take M-37 until it ends at the light.

Lighthouse Lore: Mission Point Lighthouse is celebrating its 150th birthday this year. The lighthouse was first lit on September 10, 1870, and decommissioned in 1933 (a buoy with an automatic light sits offshore now).

Seven keepers tended to the light during those years, including Captain John Lane and his wife, Sarah. The Lanes worked together, watching ships, keeping the light burning and caring for the grounds until John died on December 12, 1906. Sarah then became the first and only female keeper in Mission Point’s history, continuing the duties for two years until James Davenport took over (after his post ended at McGulpin Point Lighthouse).

As a keeper, Sarah was expected to light the lamp every evening at sunset, and keep it continually burning until sunrise; trim the wicks every four hours to ensure the light was bright; keep an exact account of the quantity of oil used each night; do household chores and keep the light station in good condition; entertain visitors to the lighthouse; and, of course, rescue sailors in peril. She also had to care for her husband who had poor health for years before he passed away and raise her daughter, Minnie Lane, who lived at Mission Point Lighthouse with her parents for nine years before marrying, according to the Old Mission Peninsula Historical Society’s records.

During her two years as keeper, Sarah helped with 27 successful rescues. When she retired in December 1908, she had served as an assistant lightkeeper and head lightkeeper for nearly 25 years.

When Mission Point Lighthouse was decommissioned and abandoned by the coastguard in 1933, it was severely vandalized. In 1939, a retiring lighthouse keeper was offered the lighthouse for $1, but he wasn’t interested. Nearly 10 years later, in 1948, a group of 43 residents of Old Mission Peninsula started a collection, raising approximately $1,900 to purchase the lighthouse and adjacent grounds. The township then purchased it from them, and over the years it has been beautifully renovated. 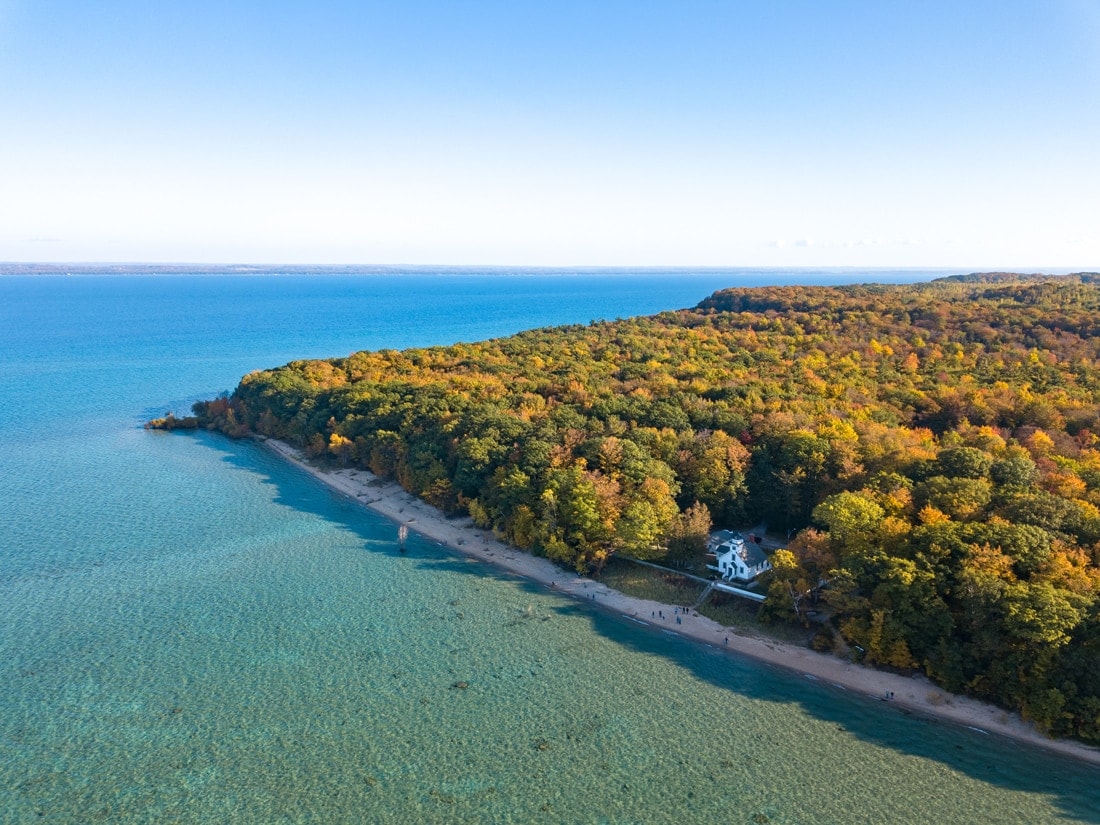 Make it a Day at Mission Point Lighthouse

Visit: Mission Point Lighthouse is closed to the public from December through April, but the park, beach and trails are open year-round. The lighthouse sits near a sandy beach and is surrounded by five acres of wooded township land and hundreds of acres of state land. Trail maps are posted in the park. There is an admission fee to tour the museum and lighthouse tower, all proceeds benefit the continued preservation of the light.

Dine: We love the rustic vibes, craft brews and artisan pizzas at Jolly Pumpkin (13512 Peninsula Dr.), and we’re definitely not alone in our adoration. Jolly Pumpkin’s Traverse City location was named one of the top 10 brewpubs in the U.S. in 2018 by USA Today.

Sip: Bowers Harbor Vineyards makes a lighthouse wine, and a portion of its sales are used for restoration projects at Mission Point (2896 Bowers Harbor Rd.). Buy a bottle for later and take a glass to enjoy on the patio. It’s a prime spot for sunsets with West Grand Traverse Bay twinkling behind vineyard rows, and neighboring trees lending bright pops of orange, red and yellow to the scene.

Drive: M-37 (also known as Center Road) makes for a fabulous fall color drive. On your way up to the lighthouse, stop at Pelizzari Natural Area (6852 Center Rd.) to hike some or all of the nearly 3 miles of trails through wide meadows and fields, former orchards and quiet forests (hunting isn’t allowed here, so don’t worry about wearing orange). Farther up the peninsula, pull over at the Center Road Scenic Overlook, located next to Chateau Grand Traverse Winery.

Carly Simpson is the editor of the wildly popular email newsletter The Daily Splash. Subscribe at MyNorth.com/Newsletters // David Weidner is a commercial and landscape photographer who resides in the Northwoods of Michigan.

Find this and more fall color ideas in the October 2020 issue of Traverse, Northern Michigan’s Magazine; or subscribe and get Traverse delivered to your door each month.