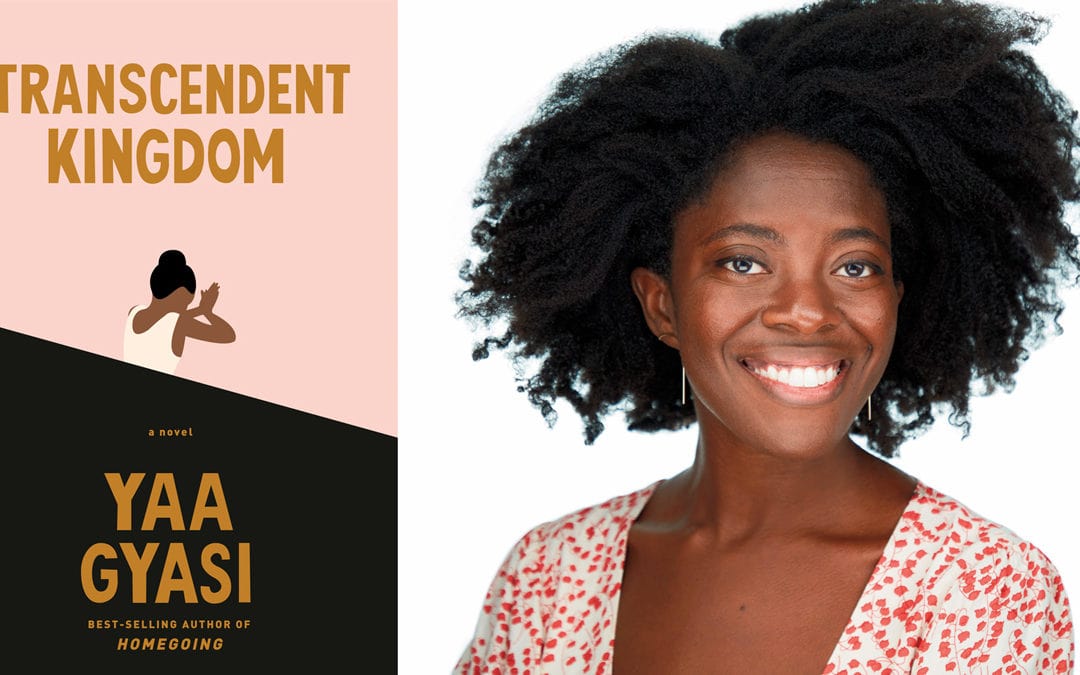 Critically acclaimed author and national bestseller Yaa Gyasi will be at Traverse City’s National Writers Series on Wednesday, September 23, beginning at 7 p.m., to discuss her stunning second novel, “Transcendent Kingdom.” The book is an instant New York Times bestseller, now #3 on the list, and was published on September 1. It’s available for preorder at Horizon Books with a 20% NWS discount.

This is a free, virtual event. Register for the event. Guest host for the evening is Rochelle Riley, a 20-year Free Press veteran, and current Director of Arts, Culture, and Entertainment for the City of Detroit.

For award-winning author Yaa Gyasi, writing is a medium through which to seek meaning. “For me, what it means to be human and what it means to be alive are questions that I’m trying to explore through my fiction,” she says. “These are the central questions of most of our lives, and [writing] is the thing that gives me solace.”

Born in Ghana, but raised principally in Huntsville, Alabama, Gyasi credits a childhood love of books as the catalyst for her subsequent writing career. “I started as an incredibly voracious reader,” she says. “I was obsessed with Reading Rainbow, and I started writing early on as a way of being in conversation with that love of reading.” In fact, Gyasi’s fate was sealed at the age of seven, when she submitted her very first story to the Reading Rainbow Young Writers and Illustrators competition. “It was called ‘Just Me and My Dog,’” she says, “And, I was kind of hooked after that.”

Gyasi first took the fiction world by storm in 2016 with her debut novel, “Homegoing,” a family saga spanning two continents and nearly 200 years. As of this month, she’s at it again, this time with the release of a long-awaited second novel, “Transcendent Kingdom.” But while Gyasi’s focus has always been fiction, this story also has roots in reality. “I was inspired to write this book because of the work of my friend, who is a neuroscientist, and whose research I borrowed in order to write [it],” says Gyasi. “The experiments that I talk about in the book are experiments that she actually did as her final thesis project. It was an attempt to create fiction around this very real research that my friend did, and to see if I could find a story that would layer in.”

Suffice to say, she found one. “Transcendent Kingdom” follows Gifty, a Stanford University doctoral student, studying the neural pathways of reward-seeking behavior in mice. “That basically just means she studies things like addiction and depression,” Gyasi explains. Whilst Gifty struggles to complete her project—charged, no less, with flash-backs to her brother’s heroin overdose years before—she is also tasked with caring for her severely depressed mother, who has recently come to stay with her. “She is a woman who is trying to make sense of her life and the traumas of her childhood,” says Gyasi, “both through her work, and also the upbringing she had.”

Though poles apart as far as plotline, both of Gyasi’s books overlap on the level of inheritance; in terms of bloodline, as well as the burdens that often accompany it. “That’s the through-line for my books,” she says, “How we make sense of the traumas we have inherited.” As Gyasi explores in “Transcendent Kingdom,” one trauma we all must inherit is that of the human condition. “Toward the beginning of the novel, [one of Gifty’s school teachers] says something along the lines of, ‘Humans are the only animal to believe that they have transcended their kingdom.’ She is talking about Kingdom Animalia,” says Gyasi, “but Gifty thinks about it in terms of meaning: life, and why it matters that we’re here. There are so many human elements to this type of work, that it made it easy to want to write about it.”

So how do we make our own meaning? That remains to be seen. But, if Gyasi’s taught us anything, stories are often a good place to start. “Read as much as possible, and never stop reading,” she says. “These are unanswerable questions we’re asking, but, if you start with a curiosity about the world around you—if you start with a lens of compassion toward the people around you—then, I think you’ll get closer to answering those questions.”