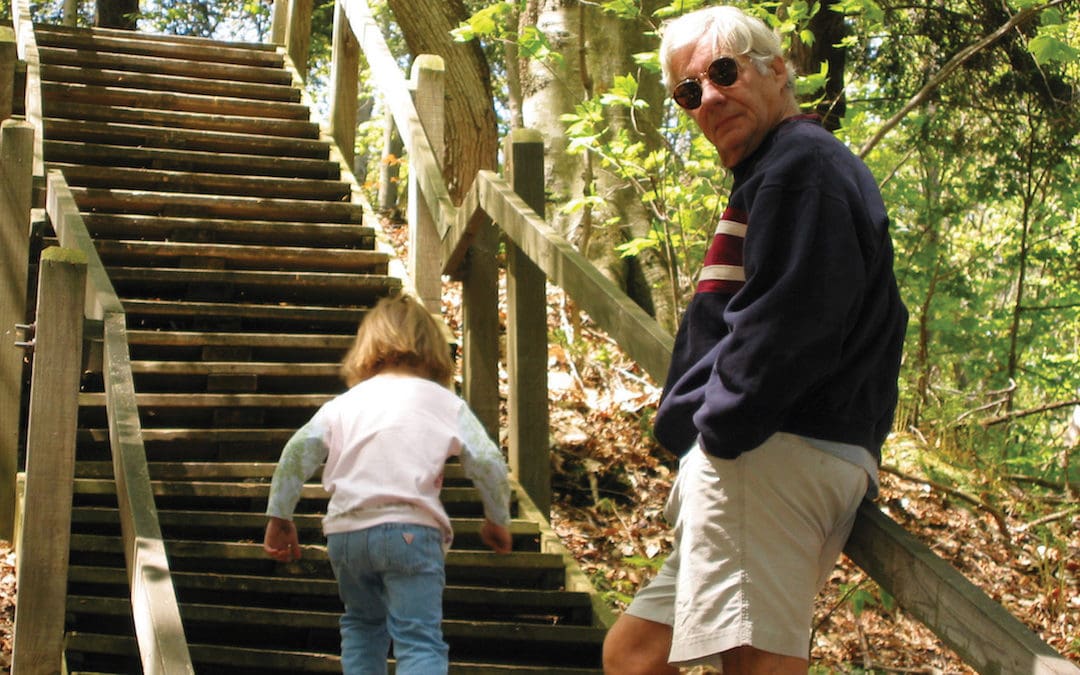 I lost a dear friend last month. It wasn’t COVID-19—but rather the winding down of a long and remarkable life. People all over, particularly Eleanor, his wife of many decades, are adjusting to a world without Kurt. I’m certainly one of them.

I would not try to write about Kurt’s life, or the loss of him, if it weren’t for profound impact on this dream of a magazine for more than 37 years. I met Kurt Luedtke when I was 26 years old and in way over my head, having started Traverse on a song and a prayer, and neither seemed to be helping. I owed more than $180,000 in active payables, and any one of 10 things could shut us down on any given day. I was working two jobs, and still, I was a believer in the truest sense.

As such, I’d taken to calling all kinds of experienced people around the country to ask one question: “Should I quit?” People were remarkably kind to look at and talk about our situation. And they were equally kind when they all answered my question with, “Yes.” Most did not believe Northern Michigan could support a four-color magazine. I believed differently, knowing our passionate entrepreneurs and the readers who dearly love this place.

One of the people I called suggested I reach out to Kurt, who spent time in Glen Arbor. He was a Pulitzer Prize winner, Executive Editor of the Detroit Free Press at the age of 33 and nominated for an Oscar for Best Original Screenplay for “Absence of Malice.” Daunting, but I didn’t miss a beat. They had told me he was incredibly smart. And I needed smart.

I called Kurt in Glen Arbor on a blustery Monday in October. He answered the way he did every time his phone rang: “Kurt Luedtke.” He was absolutely silent as I babbled a bit, and then he finally said, in his notoriously clipped manner, “Come out at 5. And bring three issues.” And he hung up.

I arrived at 5 p.m., sat down on the couch and began my passionate story of why this magazine should survive. Kurt was a chain smoker. And he liked to move around. After about 15 minutes, having been through many of these sorts of meetings, I figured I had about 15 more minutes and I’d be back in the car. I talked faster. He smoked and walked more, asking the occasional question. At one point I looked at the clock and saw it was 7 p.m. I apologized that I’d taken so much of his time. He said, “I don’t have anywhere to be. Do you?” I said, “No,” and he did his thing with his hand that meant keep going. Then he stopped and said, “But, Deb, you probably want to take off your coat.”

At around 10:30 p.m., after the most engaging conversation I’d ever had about the magazine’s reason for being and the obvious challenges, Kurt said, “You have two options. If you want to quit, I’ll get you a job anywhere in the country. If you want to keep going, I’ll help you figure this out. Let’s get something to eat.” I stood up to follow him, feeling for the first time since I’d started that, just maybe, I wasn’t a failure.

We went out to a local tavern, and I got my first taste of his storytelling prowess, and of a life filled with remarkable stories. I also got my first glimpse of Kurt’s brain, his very dry humor, his intolerance of feckless thought and his insatiable curiosity. We closed down the bar. When I got back in my car, I was so wound up that I drove to Empire Bluffs, parked away from the entrance (because, of course, you can’t be in the dunes at 2:30 in the morning), and walked to the top of the dune. I looked out at the enormous expanse of black and stars, the sound of the waves far below and trees creaking behind me, and I thought, if it all ended that night, I’d be left with a profound sense of gratitude. Even though Kurt, too, had said he didn’t think the region could support a magazine, he didn’t tell me to quit.

After that first night, Kurt met with the staff. He helped us hone our mission. He even went to plead my case with someone at the state tax agency when I had a tax problem. That first year, Kurt was in Glen Arbor doing the last rewrites on “Out of Africa” and was always happy to have someone to grab a burger with, as well as many, many Bourbon Manhattans—no fruit, the color of tobacco. I was the lucky recipient of Kurt Up North. Through weekly drinks and dinner over the next three decades, I spent time with him in a place he loved, outside the wider world. And I saw yet another example of how Northern Michigan embraces creative and accomplished people: For the most part, he was just Kurt. And that was how he liked it.

Kurt gave praise, not just because he thought it was well deserved, but because he knew you knew it was. And the same with criticism. Anyone who has worked for Kurt or asked for his input knows he could skewer you brilliantly and often. During the four decades of our friendship, I’d occasionally get an email from him, after an issue came out that said things like, “I thought you were a writer. After reading this column, maybe not.” As I said, he didn’t suffer fools lightly. But, the thing about Kurt was, he took the time, if he wanted to, to truly know you, know what you dreamed of, know what you were capable of, know the standards you set for yourself. His input, no matter how harshly put, always came when he saw you dropping the ball on those very things. So, once the sting subsided, a sense of possibility emerged because Kurt believed you could do better.

I met Kurt when it was just me and my dog, Sara. I knew him my entire adult life, and he was a part of it all. He didn’t quite get why I would have four kids but from our first, he poured over the stories I would tell, finding joy in their antics and such compassion in their struggles. Kurt and Eleanor always treated our kids with warmth, humor and a respect often reserved for adults.

Kurt was brilliant. He was the person you wanted in the face of challenge. He had the most wonderful laugh, and when you made him laugh, it was like winning the lottery. He was a student of the lives of those he cared about, making each of us feel as though there was nothing too small to share with him—and nothing too big.

And so, we start learning how to live in a world without Kurt. What I wouldn’t give to dial the phone one more time and hear: “Kurt Luedtke.”