Marquette, Michigan Needs to Be on Your Travel Bucket List 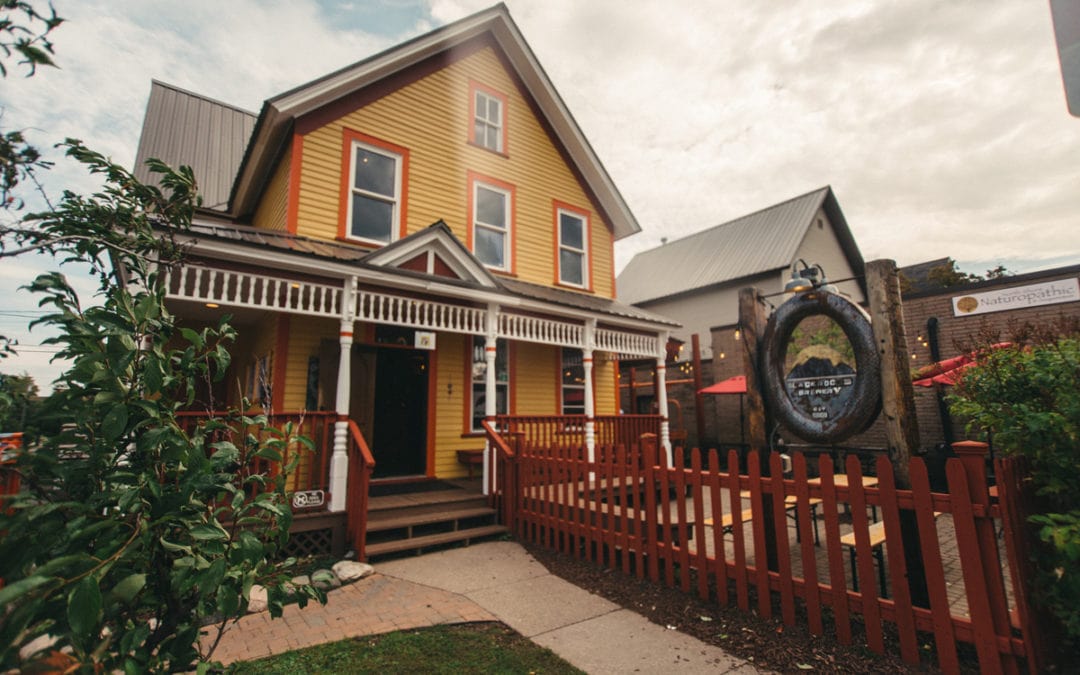 Buzzing with an organically hip craft brew scene and naturally blessed with terrain tailored for adventure, Marquette is basking in national attention for its four seasons of distinctly Yooper-style fun. This Northern Michigan town is seriously worthy of your travel bucket list.

On Tuesday, December 28, 2010, Dave Manson and his partner, Andy Langlois, opened Blackrocks Brewery in a circa 1920s clapboard house on Third Street in Marquette. They’d brewed four barrels of beer for the occasion—enough, they thought, for two weeks. The barrels were empty by the weekend, drained by Marquette’s largely untapped legions of craft beer lovers (one of which I have become on my many visits to Marquette in the last decade).

After taking the biggest risk of their careers (they had both recently been laid off from their jobs as pharmaceutical reps), the duo allowed themselves to hope that they were on to something. “Until then, the beer scene in Marquette was pretty naive,” says Manson. Although he is quick to point out The Vierling, a much-loved downtown restaurant, had been brewing beer since the 1970s. Blackrocks, however, with its funky mustard-and-orange exterior, furniture made out of bike parts and fencing built from “wayward skis,” had ignited a craft beer/adventure-sport culture in a city once known mostly as a Plain Jane, home to an industrial waterfront and Northern Michigan University. 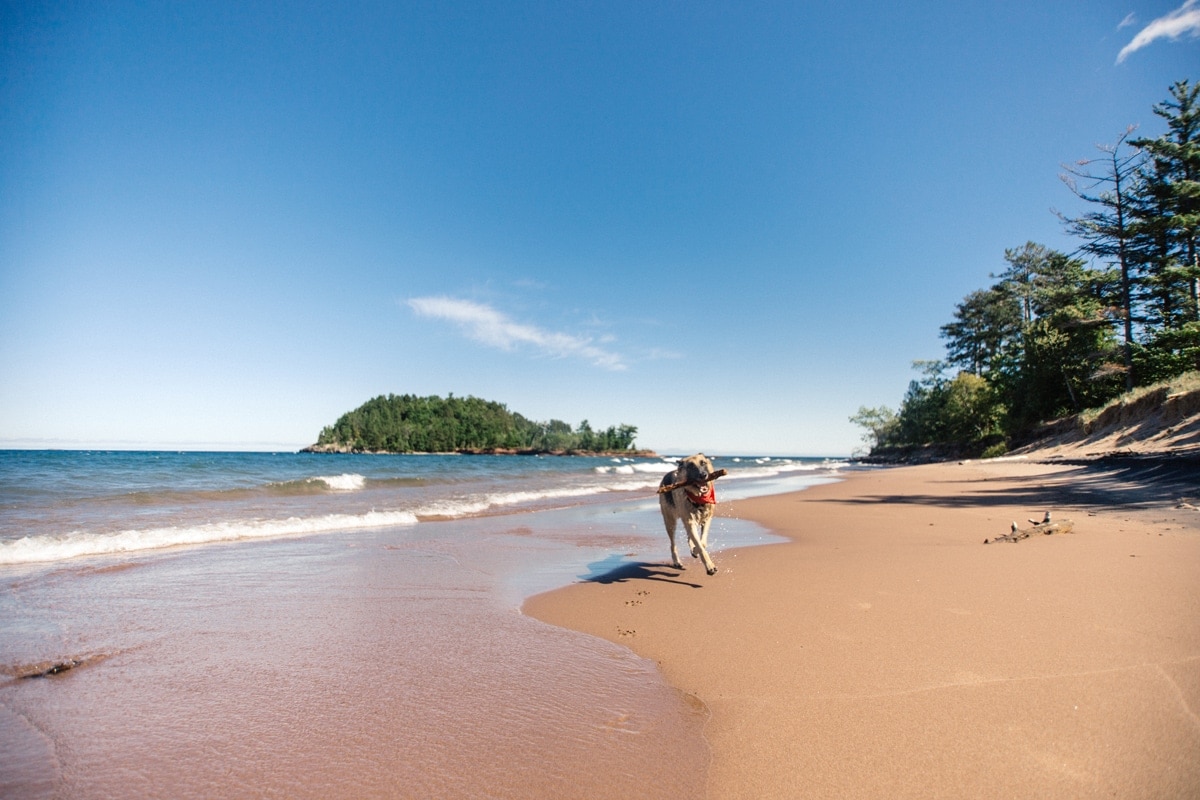 Blackrocks brought the beer to this new party and Marquette brought the spectacular landscape. Set on the Lake Superior shore of Michigan’s Upper Peninsula (if you are from the U.P., you are a Yooper), the city is awash in stunning shoreline studded with cliffs, small explorable islands and rivers pocked with cascading waterfalls—77 of them all together. I have not seen them all, but I have hiked along the Dead River Falls in spring when the torrent of snowmelt rushing over rocks washed away my winter blues.

Tucked as it also is in the foothills of the Huron Mountains, summits like Sugarloaf Mountain define infinity with expansive views of cobalt Lake Superior that blend into the sky. One autumn day several years back, I climbed the short trail up and exhaled at the sight of the oranges of hardwood leaves, shadowed in the deep greens of conifers, rolling down to the water. The city’s ski area, Marquette Mountain, has (by Midwestern standards) a respectable 460-foot vertical. And everywhere in and around this city, there are trails: miles and miles and more miles of them for skiing, snowshoeing, hiking, mountain biking and snow biking.

Marquette’s natural terrain and beauty are, of course, ageless. But a number of factors allowed it to come of age. Yooper photographer and filmmaker Aaron Peterson credits the city’s foresight in creating green spaces on the waterfront, like Mattson Lower Harbor Park—an area that had once been strictly industrial—that “gave the downtown waterfront a focal point and a space for the festivals and events that have come to define Marquette.” He also points to the development of the vast mountain bike trails in the Noquemanon Network. “As our trails became legitimized, legal, signed and mapped, they could then be promoted directly and indirectly and this helped give the region its outdoor identity,” he says.

Given Peterson’s Yooper modesty, he isn’t one to point out his own contributions to Marquette’s new-found fame. In 2014, after his movie “Cold Rolled” about snow biking in Marquette drew acclaim at the Mountainfilm Festival in Telluride, CO, he wondered why his was the only film featuring the Midwest’s adventure scene. So, in 2016, to help promote Midwest films and filmmakers, he founded Marquette’s Fresh Coast Film Festival held annually in October at venues around town as eclectic as Blackrocks to the Delft Bistro—a converted, last-century movie theater. 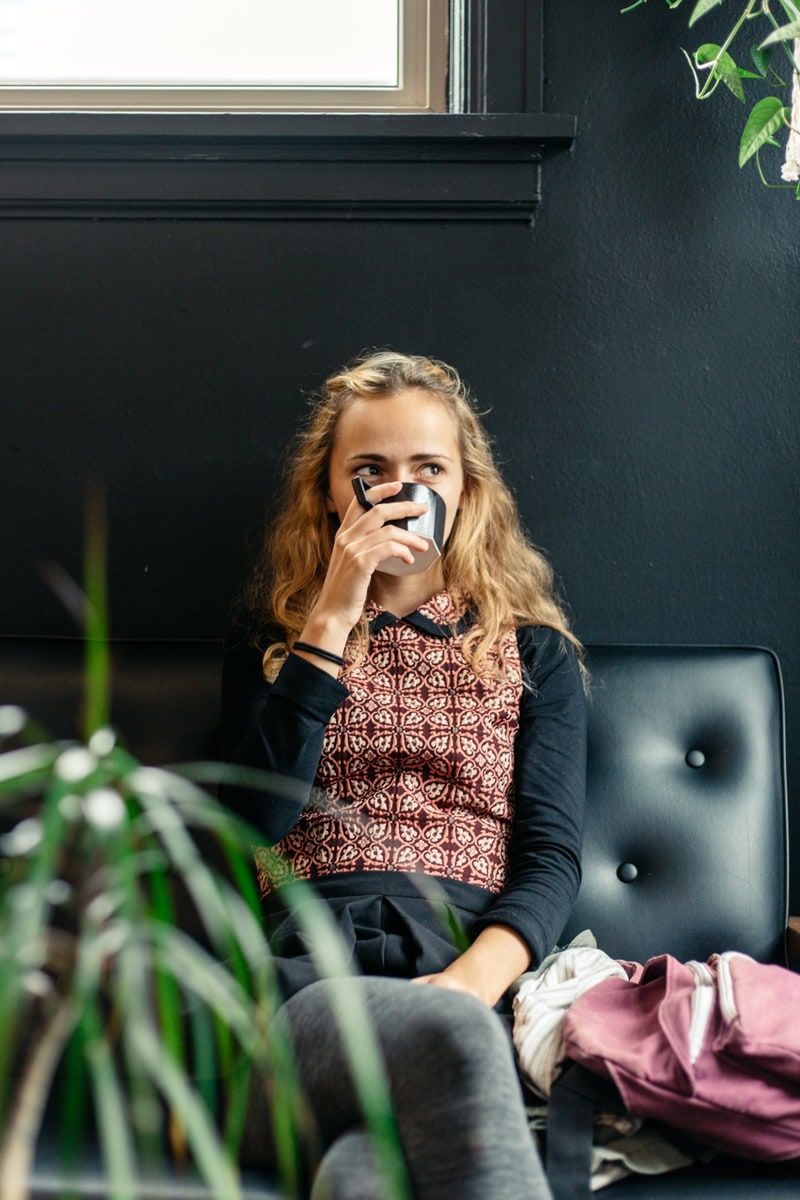 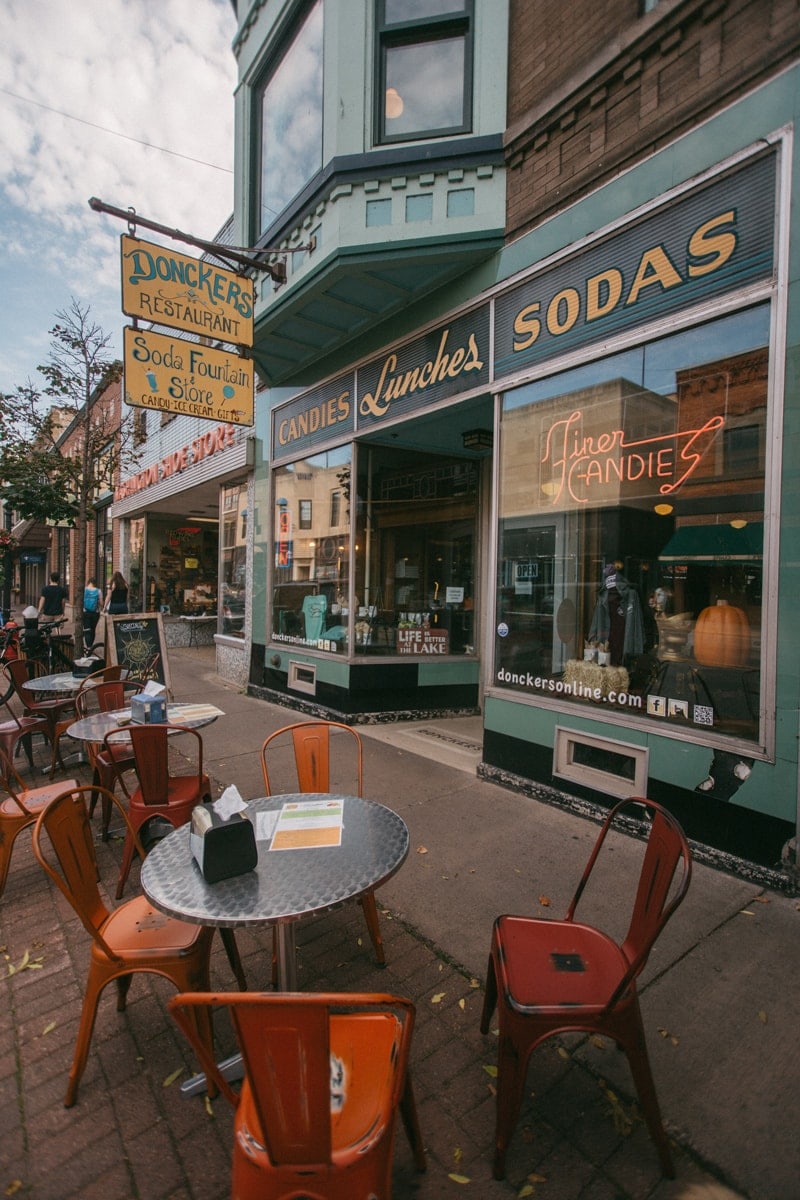 And, as it turns out, if you build a craft brewery like Blackrocks, more will come. Ore Dock Brewing Company, set a couple of blocks off the downtown waterfront, opened on the heels of Blackrocks, followed by Drifa Brewing. Add to that six more taprooms, including Superior Culture, where they serve up nano-brewed beer alongside kombucha. There are also eight coffee shops and the Zephyr Wine Bar and Cafe. It all adds up to a well-rounded beverage per capita in this city of 22,000.

Not surprisingly, the food scene, which for the better part of a century centered on pasties—meat pies that immigrant Cornish miners introduced to the U.P.—is on fire with new bistros and gastro pubs like the Delft and Iron Bay Restaurant & Drinkery that feature farm-to-fork and regional cuisine dishes. (The Delft’s poutine, a traditional Canadian dish of French fries smothered in gravy and cheese curds, will lay you happily low for hours.) Meanwhile, iconic establishments like The Vierling have updated their menus.

​Read Next: Where to Pull Over for Pasties in Northern Michigan 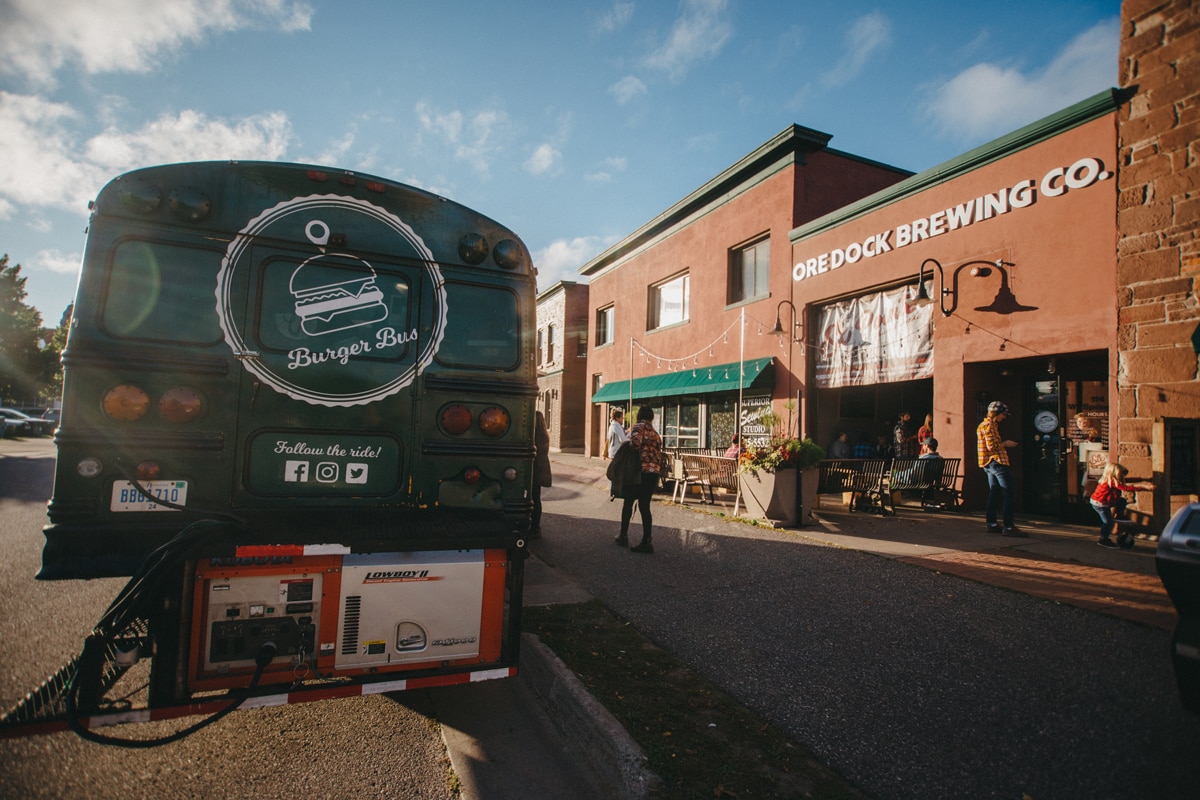 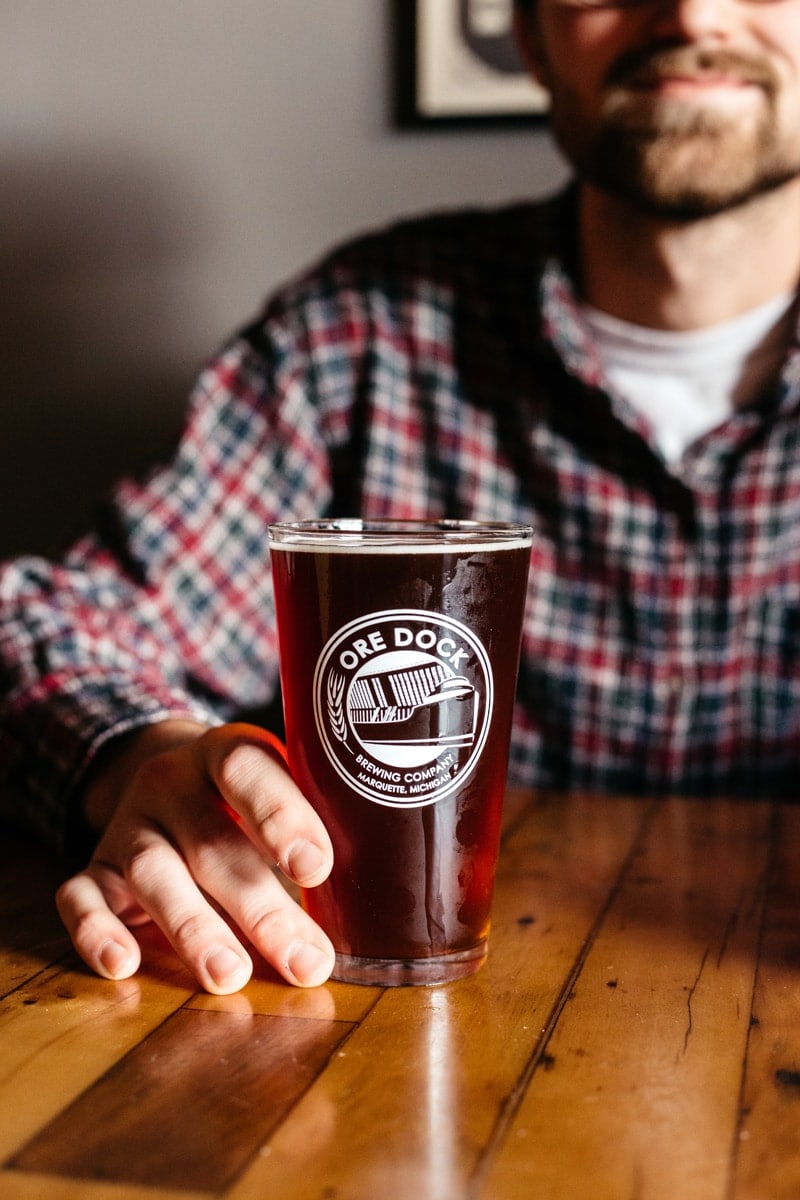 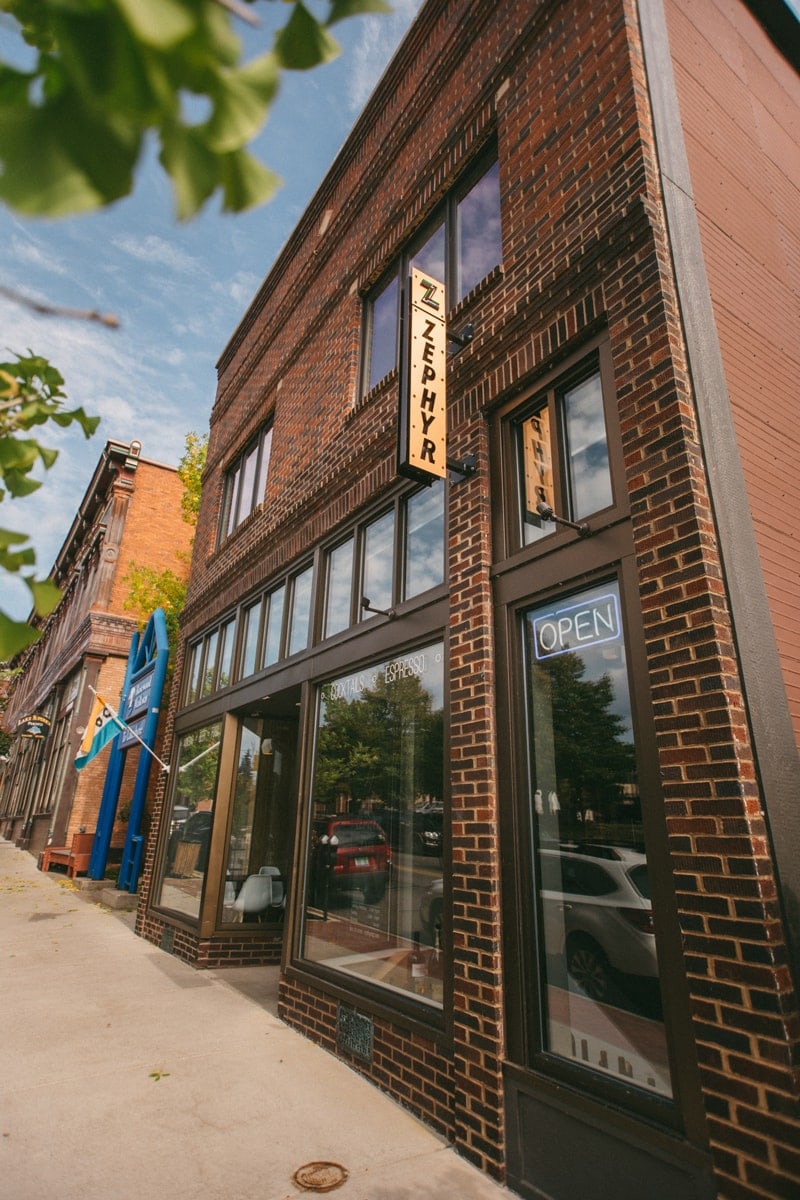 Anyone who craves an old-fashioned, laid-back hippy vibe is in heaven here, including millennials. The percentage of the city’s population under 30 years old has risen 5 percent in the last decade—a figure that doesn’t account for all the 20-something renters crammed into the city’s turn-of-the-last-century clapboard homes who either attend NMU or are sticking around for a couple of years longer because they just can’t quit their Marquette habit. For all of their joy that Marquette not only has great mountain bike trails, craft beer and organic veggies, the younger set is also fond of this city’s homely roots. They love the way Yoopers say “hi” to everyone they pass, the way they say “yah” instead of “yes,” and the way they tend to end sentences with “‘eh,” like that foreign country across Lake Superior. And no, these youngsters haven’t foregone pasties. As Liam Kaiser, a senior at NMU tells me: “Eating a pastie from Jean Kay’s [a pastie shop by the university] is still a rite of passage for freshmen at NMU.”

The city is fresh fodder for the press, too. Outside Magazine regularly loves up Marquette, and in 2018 and 2019 the city made USA Today’s 10 Best Readers’ Choice list for Best Small Town for Adventure. Just this year, Orbitz name it among 12 of America’s most charming lake towns.

If the statistics and accolades glaze you over, try this: bring up the subject of Marquette to anyone who has lived or gone to school in the city. Each time I’ve done it, the person I’ve asked has burst out in an all-caps verbal, “I LOVE MARQUETTE.” 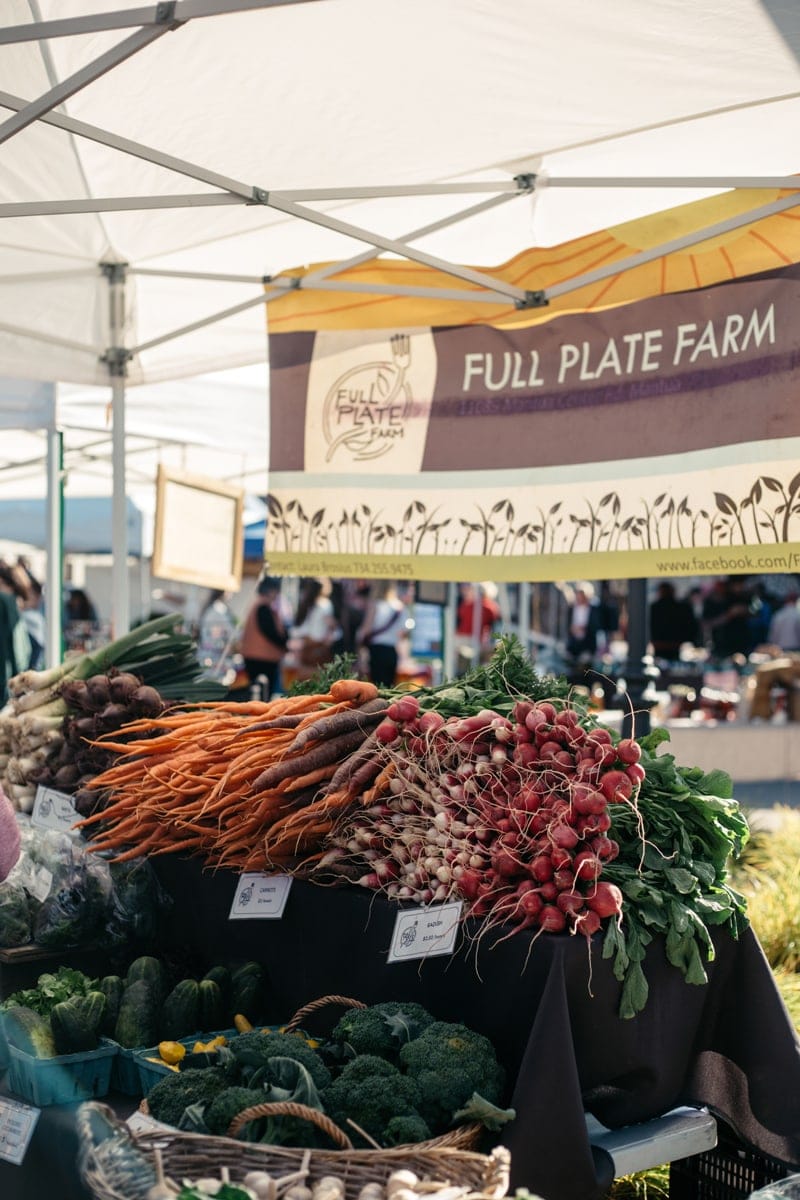 MARQUETTE IN THE WINTER, YAH!

“I LOVE MARQUETTE!” I am thinking this as my partner, Steve, and I step gingerly through a veil of fine snow falling into knee-high drifts relentlessly as flour through an old-fashioned sifter. It isn’t even officially winter yet. At the corner of Third Street and Michigan Avenue (where our sweet, Victorian-era Airbnb is located) we are greeted like long-lost acquaintances by a guy shoveling his driveway. “Great weather, huh?” he says, grinning and leaning on his shovel.

Steve’s quip, “Perfect day for an ice-cold beer!” is muted by the snow. But the guy catches what he says—the beer part, anyway—and grins again as he resumes his shoveling. This down-to-earth, straight-up friendliness is as part of the Marquette mystique as pasties.

“One draw here is the people and how we all manage to get along with each other,” City Manager Mike Angeli says. “I’ve often joked (but half-seriously) that if the rest of the world got along like we do, the world would be a better place.”

But as we turn to walk up the steep hill on Third Street, I think: they (those people who proclaim their love in all caps) never mention that Marquette is the third snowiest city in the contiguous United States. And—as we watch a woman in a small SUV spinning her tires up the busy street, only to give up and back down the opposing-traffic lane (to avoid the log-jam of cars behind her), just a few seconds before a city commuter bus pops over the brink of the hill—Marquette’s ardent fans never mention these icy kamikaze runs up and down the hill that the city is built on. Or, if they do, it’s with a chuckle permeated with sisu. (Sisu is a Finnish word for grit and stoic determination. Finns are another immigrant group that put their cultural stamp on the U.P.)

But as Finns know, a red-hot sauna cleanses away sisu-induced stress. Likewise, a couple of craft brews and a sauna after fighting your way up 1,200 rugged feet of elevation on a mountain bike are just what the doctor ordered. Saunas are still a loved part of Marquette’s lifestyle. However, while public saunas were frequent around the U.P. not too long ago, now you’ll mostly find saunas in hotels and private homes.

The only public sauna left, in fact, is the Second Street Sauna founded in 1929. The new owner of this old business happens to be owned by a childhood friend of my daughter’s, Sarah Jane Adler. SJ, as she is known, was one of those Lower Peninsula Michigan kids who headed over the bridge to NMU, where she studied opera and fell in love with Marquette. During her college years, SJ became a regular at the Second Street Sauna, as she says, “to keep her pipes in good shape.” On one of her first dates with her husband-to-be, Claes, SJ took him there. He was hooked—on her and on the sauna.

When they got pregnant, the Adlers moved back downstate to be near SJ’s family, but it didn’t take the couple long to miss Marquette—specifically its friendly sidewalks and its saunas. When the Adlers found out the Second Street Sauna was for sale they pinched themselves. It even came with a house attached. They bought the old building with its four sauna rooms heated by a natural gas boiler system, well knowing that they have a “lifetime of repairs, improvements and restorations ahead.”

Read Next: Winter is Better in Marquette: Pair a Local Brewery with an Outdoor Adventure

As Steve and I stomp into Second Street Sauna, peeling off snow-covered outerwear, we are greeted in the foyer by SJ and her two lively preschoolers. She ushers us down a hall and tours us through the sauna rooms. They are authentically, homespun U.P.—just the way Marquette’s new wave of pioneer-hippies would have them. I pick the sauna that has a loft with a claw foot tub below. How could I not? Can I just say that our 60 minutes ($20 an hour plus $5 for each additional person) sweating and soaking in this jungle-gym of a room was epic?

Apres-sauna we head down snowy Third Street to Main Street Pizza, pick up a cheese and sausage to-go and bring it to Blackrocks Brewery to eat (the brewery doesn’t serve food but you are free to bring it in). I order up a Classic Pilsner to go with, Steve a Tip of the Ship Oatmeal stout.

An hour or so later, on our way back to our Airbnb, we meet the shoveler, still hard at work battling the incessantly falling snow. He pauses long enough to greet us—now as old friends. As we walk away, Steve and I kick ourselves for not bringing him a beer. That would have capped our authentic Marquette day off perfectly. Next time.