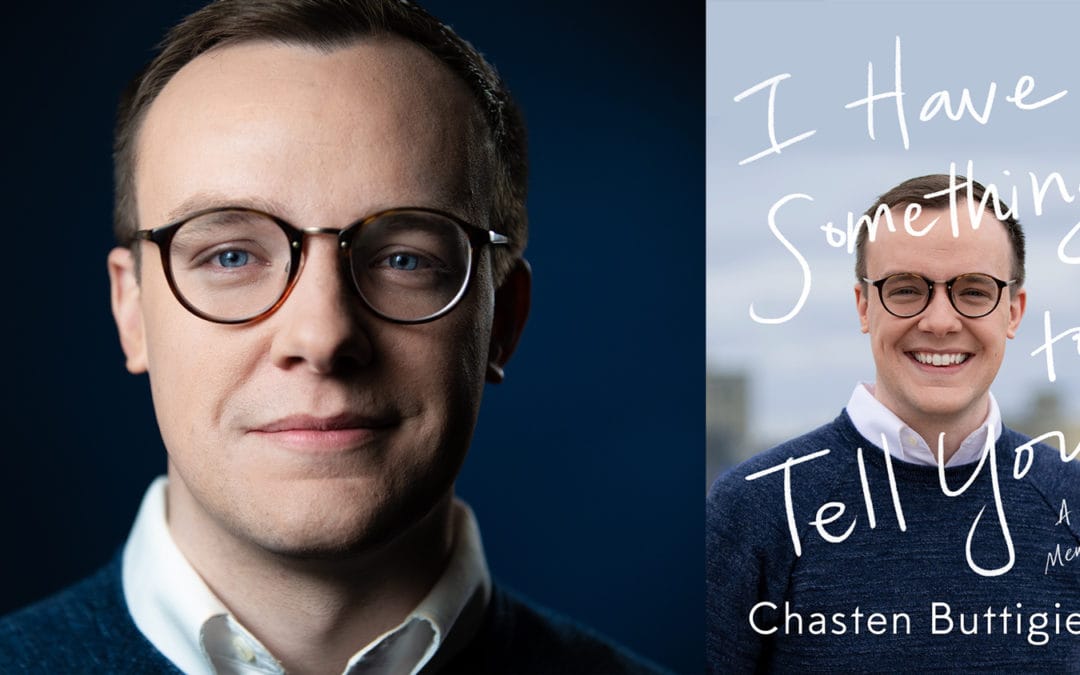 Chasten Buttigieg, a debut memoirist with Traverse City roots, will be at the National Writers Series on Thursday, September 10, beginning at 7 p.m. to discuss his memoir, “I Have Something to Tell You.” The book was released on September 1 and is available at Horizon Books.

This is a free, virtual event. Register for the NWS event here. Guest host for the evening is Elon Cameron; a local organizer, artist and co-founder of Up North Pride.

Chasten Buttigieg has played his fair share of parts since his arrival on the national stage this year. The husband of former Democratic presidential contestant, “Mayor Pete” Buttigieg, and Northern Michigan native, Buttigieg is a secondary educator, campaign trailblazer, and as of earlier this month, a first-time author. “I would not consider myself a writer,” says Buttigieg, “so, it is quite strange to hold the book, see my name on it, and think, ‘Wow! I actually did that!’”

Buttigieg’s debut memoir, “I Have Something to Tell You,” covers everything from the conventionalities of an “up-north” childhood, to queer identity, to the campaign trail. But make no mistake: Buttigieg isn’t here to play politician. “I feel that people who typically write books in politics are very dense,” he says, “and to me, that is scary. This is a world I haven’t been in very long. I’m not looking to comment on the 2020 race—I just want people to get to know me.”

As such, Buttigieg purposefully framed his first book to feel more like an intimate talk than a text. “I didn’t want the book to be this grand memoir or exposé; I just wanted it to be this thing you could pick up and feel like you were sitting across from me at a table, getting a coffee.” Still, there’s no room for contrivance in good conversation. “I really wanted it to feel authentically me,” he says. “Sometimes, you read a book, and you kind of feel like the reflections are far removed from the lived reality. My story is like, ‘This happened, it sucked, it was heart-breaking, moving on.’”

And move on he has—to one of the most ground-breaking presidential campaigns of the last century. So, how does politics come into play for Buttigieg? “I just talked about all of the things that shaped me, for good or for bad,” he says. “When we launched the campaign, I thought, this is a historic moment. We only get one chance, and I’m just going to do it being me. I [thought] that I could be most impactful by talking to teachers, and students, and artists, and I think that’s what helped me be successful on the campaign trail—at the end of the day, I was just talking to people who I had something in common with.”

For Buttigieg, that also includes the LGBTQ+ community; specifically, that of Traverse City. “I feel really protective of my hometown,” he says, “even though part of my story is how, growing up at that time, it wasn’t the easiest place to be. I remember being 18 here and feeling like I had to be so hidden and secretive. It felt dangerous, sometimes, just to be who you were.” But that was then; and the prospect of coming home to progress only pushes Team Buttigieg to participate further. “It means so much to me how Traverse City is pushing the needle so fast,” says Buttigieg, “and that [there are] people committed to making it happen. We, too, want to be part of that progress.”