Stand Up for Great Lakes Raises $12,000+ for Paddle Antrim 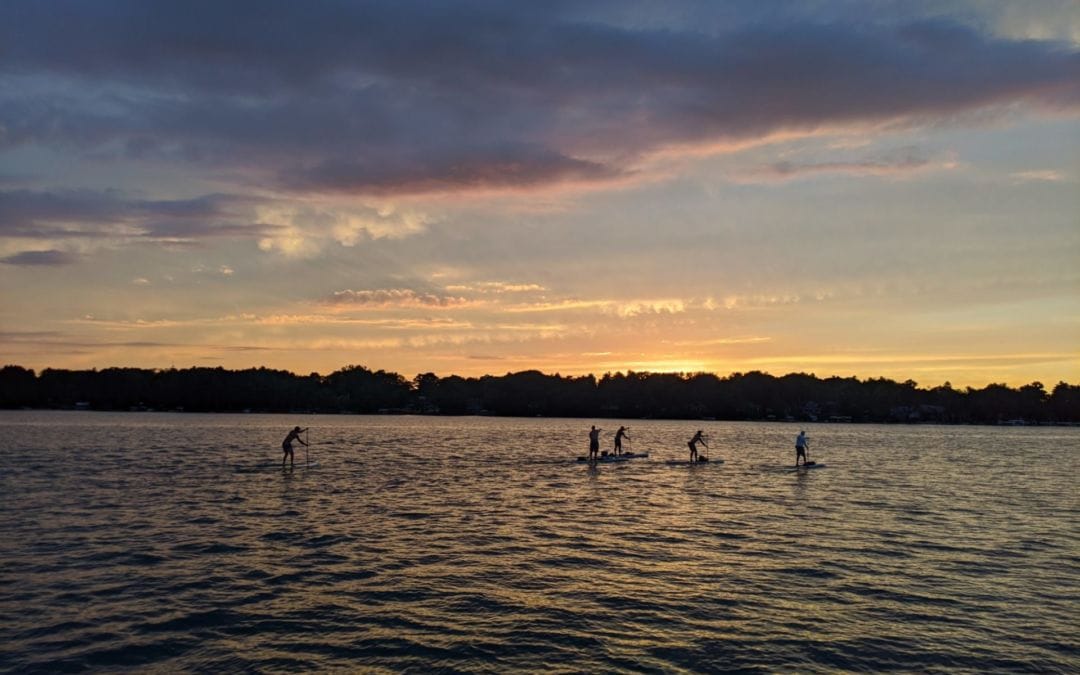 A Northern Michigan nonprofit raises more than $12,000 for Paddle Antrim and the Chain of Lakes Water Trail.

Stand Up for Great Lakes successfully paddled the Chain of Lakes on August 1 starting at Six Mile Lake, near Ellsworth, and ending at Elk Rapids Rotary Park. The journey began at 5:30 a.m. and ended at 9:30 p.m. and was 50 miles in length.

The guys were not alone on this paddle; they were joined by more than 50 paddlers for different sections along with numerous boats and hundreds of people cheering from shore. “This paddle was so unique,” says Kwin Morris of Elk Rapids. “Normally we are all alone out there but it was so awesome to have people join us for this one. It showed how much people care about the chain.”  Four paddlers—Jeff Guy, Kwin Morris, Joe Lorenz and Grant Piering—started from the beginning and made it all the way to the finish. Joe Short of Short’s Brewing started with the group and made it more than 40 miles before hanging up the towel.

Read Next: The Epic Journey of Stand Up for Great Lakes

The Chain of Lakes goes down as a challenging paddle. The morning started out glassy and they had some really gorgeous fog, as the day went on the wind picked up and they dealt with a headwind for about six hours. Skegemog and Elk Lake gave them three- to four-foot waves. Torch Lake was difficult too with boat traffic and congestion near the bridge. In Belaire, the river had a tree all the way across which caused a traffic jam with one board being punctured three times and a paddler being pinned to the tree.

“This was not our hardest paddle, but it was up there,” says Jeff guy, “but coming into Elk Rapids with an epic sunset and seeing all of the people cheering us in made it all worth it.”

The group has raised $12,000 and counting for Paddle Antrim so far.

Stand Up for Great Lakes is working to cross each of the five Great Lakes on paddleboards while raising funds for nonprofits that protect our waters. The nonprofit—represented and founded by Jeff Guy, Kwin Morris and Joe Lorenz—did its first paddleboard crossing on Lake Michigan in 2015—a 60-mile and just under 25-hour journey in 38-degree water. They raised $10,000 for the Great Lakes Alliance. In June 2017, they crossed Lake Huron and raised $7,000 for Thunder Bay National Marine Sanctuary. Their 90-mile paddle journey took 28 hours to complete. Last summer, they paddled across Lake Superior in 21 hours. The 60-mile trip began at Sinclair Cove, Ontario, and ended at Whitefish Point, Michigan, and raised $15,000 for the Great Lakes Shipwreck Museum. Their fourth journey was a 70-mile Lake Erie crossing that raised $17,000 for the Cooperative Institute for Great Lakes Research. The group had plans to cross Lake Ontario in June but had to postpone due to COVID-19 and having the Canadian borer closed.

Watch the award-winning documentary about their Lake Superior crossing.

Paddle Antrim is a nonprofit organization, founded in 2014, with a mission to protect water resources in the Chain of Lakes in Northern Michigan by using paddle sports to connect people to these waterways. Through stewardship, education, improved water trail access and promotion of our waterways we will increase water resource protection and enhance the economic vitality of the region.

The Stand Up for Great Lakes Team 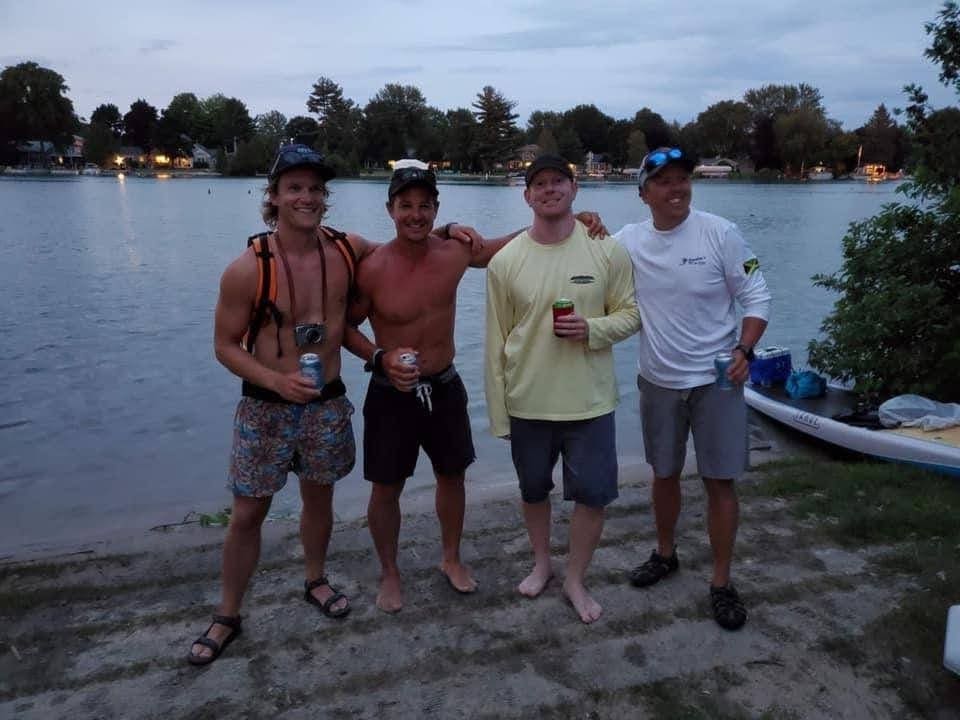 Jeff Guy: Guy, 33, is a financial advisor with Merrill Lynch. He also enjoys golf, hockey and fishing. He lives in downtown Traverse City.

Joe Lorenz: Lorenz, 33, is a personal trainer in Traverse City. When he’s not helping people achieve their fitness goals, he’s up for almost anything involving water, travel, adventure, fitness or beer.

Kwin Morris: Morris, 31, was born and raised in Northern Michigan, making him a keen waterman, traveler and adventurer. He is a middle school science teacher in the Elk Rapids School District.

Corey Adkins: Adkins is the Special Projects Executive Director for 9&10 News based in Cadillac, Michigan. A gifted storyteller, Adkins has won several awards for the “Crossing Superior” documentary which was recently nominated for two Emmys. In 2018, he won “Best Documentary” from the Associated Press and Best News Special and Special Interest Programming for his filming of the Huron crossing. He also won a 2015 award on a commemorative Edmund Fitzgerald production.