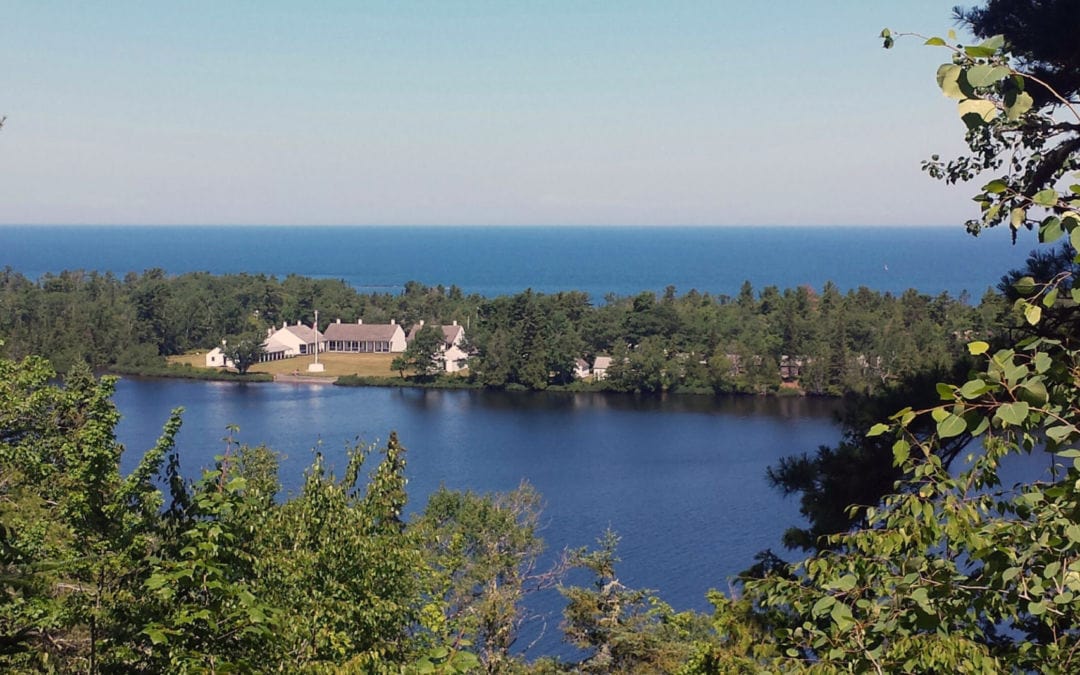 Michigan has a a treasure trove of preserved natural areas, but the state also boasts hundreds of preserved historic buildings. It’s the job of The Michigan Department of Natural Resources to protect it all.

If you own an older home, you know that maintenance and repairs are constant. Just imagine that same upkeep for the 19 original buildings at Fort Wilkins Historic State Park in Copper Harbor alone, some of them dating from the 1840s.

But the DNR’s job doesn’t stop at just keeping Michigan’s historic buildings well-maintained against the elements, it also means making sure that these valued structures survive sudden and unexpected disasters – one of the most dangerous of which is fire.

Fighting Fire with a Plan

Two instances of Michigan’s keepsakes uniquely preserved in state parks are the fort complex at Fort Wilkins in Keweenaw County and the Fayette Historic Townsite at Fayette Historic State Park, on the Garden Peninsula, in Delta County.

These Upper Peninsula parks feature original, historic, 19th-century wooden buildings that have stood for over 150 years. And all are particularly vulnerable to fire.

In the 1800s, fire was a constant threat in cities and military installations, with their wooden buildings, lack of central planning and heavy use of fire for heat and power.

The fact that the historic structures at these sites have lasted this long is a testament to the work of their caretakers, DNR employees and previous owners – as well as a good measure of luck.

In 2019 and early 2020, under the guidance of Eric Cadeau, the DNR Parks and Recreation Division’s western Upper Peninsula field planner, contractor U.P. Engineers and Architects of Houghton conducted a full assessment of the current fire prevention and suppression systems at the two parks.

The assessment recommended a number of possible upgrades to preserve the safety of staff, visitors, artifacts and the historic structures.

Between 1867 and 1891, what is now the Fayette Historic Townsite was a bustling, noisy and dirty industrial community. During that time, the primarily immigrant population of approximately 500 people produced nearly 230,000 tons of pig iron ingots at Fayette.

READ ABOUT A FIRE INTENTIONALLY SET AT FAYETTE

Most of the iron made there was shipped to steel producers on the lower Great Lakes and converted into railroad rails and steel for the growing nation. Fayette has an abundance of surviving structures from the 19th-century industrial community that was built to smelt iron ore.

The blast furnace, hotel, office, residences, town hall, machine shop and other structures offer a rare glimpse into the diverse community and its operations.

Fire posed an ominous threat for the industrial town.

“Kilns, sheds, the furnace and dock and blacksmith shop all had documented fires throughout the town’s history, so fire was pretty common,” said Troy Henderson, DNR site historian for the Fayette Historic Townsite.

Recommendations to help protect the Fayette townsite include new measures for prevention and safety, as well as installing an independent fire suppression system within the townsite.

“One of the big challenges is balancing the need for fire prevention and suppression and the need to maintain the historic atmosphere in the townsite,” said Fayette park supervisor Randy Brown. “We want visitors to be transported to the past of this busy community while also keeping people and buildings safe.”

To achieve the balance, prevention and safety measures include emergency lighting that is hidden behind doors in walls of the historic structures. In the event of a fire, the doors will spring open and the lighting will extend into the room.

Other protective measures include finding and removing all unnecessary fuel sources inside the structures and installing arc-fault circuit interrupters, which break the electrical circuit when they detect an electric arc.

These circuit breaks can happen when a device plugged into a wall outlet overheats or if an electric wire is damaged by, say, a nail or a nibbling rodent.

The recommended independent fire suppression system would be used in the event of a fire within the historic townsite. Water intake from Snail Shell Harbor would feed a sprinkler system that is triggered by smoke detection devices installed inconspicuously in buildings that house museum exhibits.

In addition, certain museum exhibits confined with limited air flow could house a non-toxic gaseous fire suppression system designed to smother a fire before it spreads to other portions of the historic buildings.

By 1846, the garrison was emptied as soldiers were sent to fight in the war with Mexico. The fort was occupied again briefly from 1869-70. This small garrison community contained separate living quarters for officers, enlisted men and married enlisted personnel as well as workshops, storehouses and other support buildings. Nineteen buildings survive, 12 of them original log-and-frame structures dating to the 1840s.

“The layout of the fort makes it very susceptible to fire spreading,” said Barry James, DNR Fort Wilkins site historian. “The officers’ quarters, barracks, mess halls and post hospital are all close to each other. Fire suppression improvements in each of these buildings will help limit that threat and protect the fort complex.”

Previous efforts to protect the fort from fire still survive. A 1970s pipe system underlays the parade grounds, with a pumping system to draw water from Lake Fanny Hooe hidden under the fort’s reconstructed bakery building.

Smaller pumps are hidden from visitors by wooden barrels. This pipe system may be upgraded and expanded, with an improved pump house available to draw water when needed.

These two treasured historic sites face a common challenge: the harsh wintry weather of the Upper Peninsula. Some fire suppression systems rely on pipes that will be filled with water – hard to maintain in the middle of winter in snowy Copper Harbor.

One way to avoid this problem would be to install a hidden heated water pump area in each building, but that would introduce a new source of combustion into buildings the DNR is trying to protect from fire, James said.

Many fires at historic homes and historic sites across the country are sparked by electrical means or occur while power tools are used during restoration work. Fire suppression systems that rely on gas or “dry pipes” are significantly more expensive.

“We are still debating the best way to protect these buildings in the winter,” James said.

Progress on planning and implementation of the new fire systems has slowed due to the COVID-19 pandemic but is still underway. It is expected to take several years to install all the assessment’s recommended safety systems.

Time is the other common enemy of historic sites and artifacts at Fayette, Fort Wilkins, and elsewhere across the state. Every year brings new opportunities for decay, degradation and disaster – but every year also brings the possibility of renewal, conservation and greater protection of these historic heirlooms into the future.