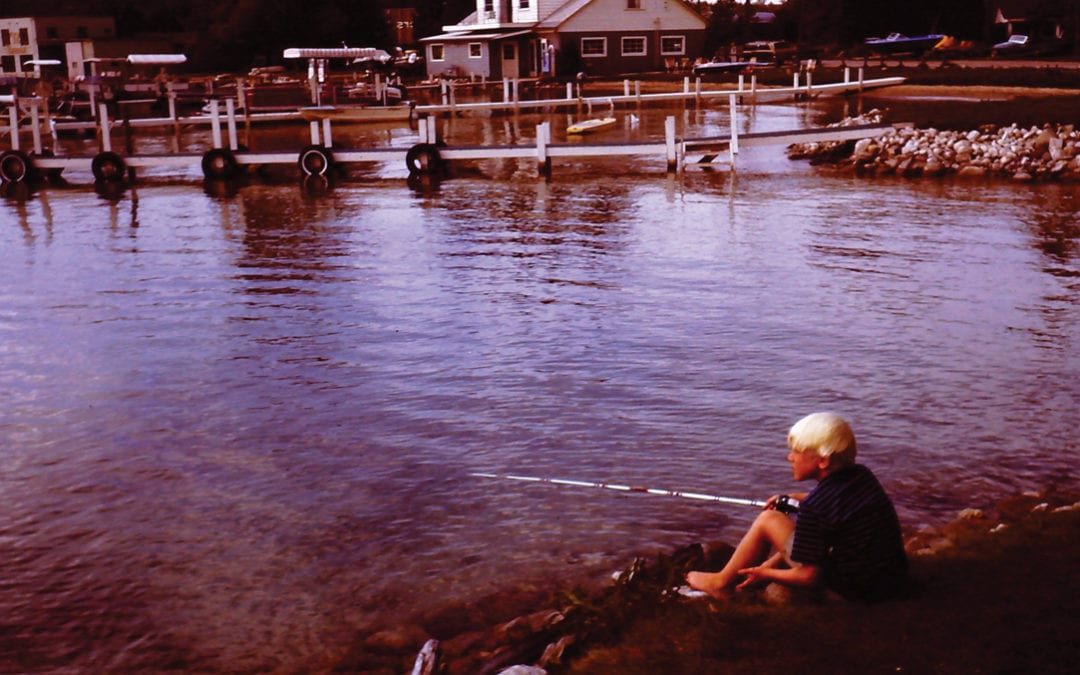 A collection of Northern Michigan fishing essays from James McCullough, author of “Echoes: Meditations on the Fly,” available at McLean & Eakin in Petoskey and Gates Au Sable Lodge.

It’s late April and I’ve just returned from camping deep in the jack pines of the Au Sable River basin with Layla, my English setter. We shared two sunny days and two cold, crystalline nights, waking to frozen water in her bowl. She is a fine companion for the opening weekend of trout season on the flies-only “Holy Waters.” Yet, to keep Layla from spring’s chilly waters, I did not fish. Instead, we rambled the many access points on that famed river from Conners Flats, Wakeley and Stephan Bridge, stopping for a sandwich at Gates Lodge, where I’ve seen three generations of ownership—Cal Gates, the founder, his son, Rusty, and now Josh Greenberg. We spent time at a picnic table at Guide’s Rest and stopped on the North Branch by Kellogg Bridge, Sheep Ranch and Dam Four. This was a weekend of reminiscence, a harkening back to the old places and stories, the old men and the resonances of my nascent years in what is now the Miller/Van Winkle Chapter of Trout Unlimited. My thoughts went to my father and the seasoned old men who gathered at Whippoorwill every summer, particularly “Rip” Van Winkle, whom I loved, and whose spirit remains with me.

With the influence of those men, and from these woods and waters, grew a consciousness that would shape my life into this 48th year of fly fishing, and a compulsion to share essays about those early days and pass them on. Many of them are compiled in the book, “Echoes,” by Deep Wood Press. The following are excerpts from that collection.

I’m maybe 7, fishing on a dock on Walloon for small rock bass with a long pole, dropping worms into crevices between the boulders, when an enormous bearded man pulls up in a powerboat, ties off and hops out with the largest bass I’d ever seen. He hands it to me and says, “Go tell your parents you caught this.” So, I do, and to their disbelief. Thus, I joined the fold of fish liars, a weakness I have long since abandoned. I know why men do it, and I have met those who all their lives will need a warning affixed to their caps: Truth = -10” / fish / tale.

When I was young, my family was invited to the north branch of the Au Sable to fish on opening day with some friends of my parents who owned a log cabin built in 1904. It has screened-in bedrooms with beds suspended on chains, a cherished spot that my own family visits most years, even now. You can hear the river below as the bed sways and slowly lulls you to sleep in the cool breeze.

But not that opening weekend. It snowed.

Only I wanted to fish. With no hatch and a cold wind, I walked upstream and fished back down to the cabin with a muddler minnow—a streamer fly with a cut deer-hair head, gold band on the hook and brown feathers that made it look like a sculpin. I caught nothing until just when I was ready to give up, I swam the fly along a log, letting it swing away at the end, and a lovely 8-inch brook trout struck.

Everyone asked if I’d caught a fish, but no one believed me when I said I did.

Most Augusts, my parents rented the river cabin at a place named for the evening call of the nocturnal bird, Whippoorwill. The river cabin was rather contemporary, but on the bluff above the river sat a historic turn-of-the-20th-century log lodge, a separate kitchen and dining cabin and another smaller, private cabin owned by Theodore “Rip” Van Winkle, whom I loved, and who understood me immediately. He instructed me with the fly rod, and later sent me a copy of The Old Au Sable, with a beautiful inscription, on my wedding day. The local chapter of Trout Unlimited, which met at the log lodge, was co-named after him when he passed away.

This is where I first learned to fly fish, in the trout-rich holy waters of the Au Sable River, a stretch of river where no trout can be killed, and only fly fishing is allowed.

Just past the old log lodge, down the stone stairs, past a trout pond and the sloping grass lawn, an old boathouse sagged on cedar posts, just upstream from the river cabin. The old men spoke to me of a mythically large “boathouse fish” that lived there—a lunker trout no one had ever caught, and at night as I lay in bed, a leviathan’s shadow moved in my imagination.

Read Next: A New Home on the Au Sable River Blends Seamlessly Into its Surroundings

Monsters in the Dark

“Watch for the muck monster,” my father said the first time he took me night fishing. Then he disappeared into the night, heading upstream, leaving me on the bank above a deep river bend. I was maybe 11, could barely make out a trace of the river’s reflection and I had no sense of distance across the opaque bend in the moonless, overcast twilight.

I shuffled my feet down to the bank, first ankle-deep, touching my toe in front of me with each inch to check the depth, and waited alone as my father had told me, for the Hex hatch to emerge—the giant Michigan mayfly.

I could not see a thing. The current made no sound, slow and flat. I scooched a bit deeper until the surface reached my anxious knees and my ankles tucked into muck.

I stopped. Certainly, the water would be over my head somewhere out there, the muck bottom slipping suddenly into the depths. I imagined water filling my rubber waders, floating me away.

A half-hour of solitude passed in the boredom, tinged with dark imaginings, when a burst of water shocked me to my groin—a giant trout chasing an emerging fly above the surface. I’d never seen such a monster. Then, a minute later, another ripped through the surface, violent and frightening, then others, beyond my longest cast. The fish were even farther out. I would have to move closer, deeper, and cast blindly upstream and across.

But the bottom dropped off out there.

Four or five times I tried to raise my courage—slide one foot, then the other, closer to the drop-off, the large, gaping mouths and teeth. Excuses began flowing as to why I couldn’t go farther: I could drown; I was not able to cast far enough; my fly dragged and didn’t float naturally; even if I could cast far enough, I’d snag on the other side, or hook my head. I found every excuse except the full admission that at the bottom of it all, I was terrified to catch one.

Read Next: Experience the Hex Hatch in Northern Michigan—It’s Epic

At 13, my father bought me a new fiberglass rod to replace the whippy Phillips I began with. By then I’d learned to fish upstream with dry flies, but had not yet hooked one of the big nocturnal brown trout the adults told stories about. I would try when Dad took me to a second camp at Ranch Rudolf on the Boardman River during the Brown Drake hatch.

I don’t remember who instructed, but I do remember clearly the last night when the conditions were muggy and still—an older man dropped me alone at sunset on my own stretch of deepening water. I sat on a log, breathing in the cedar-scented air, watching waxwings feeding above the river until the sunlight receded to the west and Brown Drake mayflies appeared. Smaller trout rose to them first. As the sun vanished over the horizon, a healthy rise popped by a log in front of me. I cast and caught a fine, foot-long brown trout, so I knew I had a good fly pattern.

No moon rose. As stars appeared, I waded in darkness upstream until a tremendous gulp resounded in the tight cedars. I followed the sound blindly until the current ran up to my chest at the back of a deep pool.

I heard the gulp again, about 20 feet upstream, and half afraid I’d catch it, I cast directly up the center of the run. I heard him rise, triggering me to set the hook and feel the line-halting heft of the fish that turned and ran directly at me. I stripped in slack line until I caught up with him as he shot back and forth violently at my feet, waving my heavily bent rod. In a panic, I reached out, grabbed the line and it snapped.

So many men spent time teaching me how to hook a big fish, but no one told me what to do if I did hook one. I’m still surprised no one came running, the way I had let out such a loud groan.

If we are fortunate, we can gaze down the vista of our lives with humor and humility, essential elements of the final phase of the fisherman’s philosophy—calling upon the wisdom of the elders who shaped our formative years, embracing the sum of our river blessings and passing our stories on to those who will listen.