Chasing the Northern Lights in Michigan 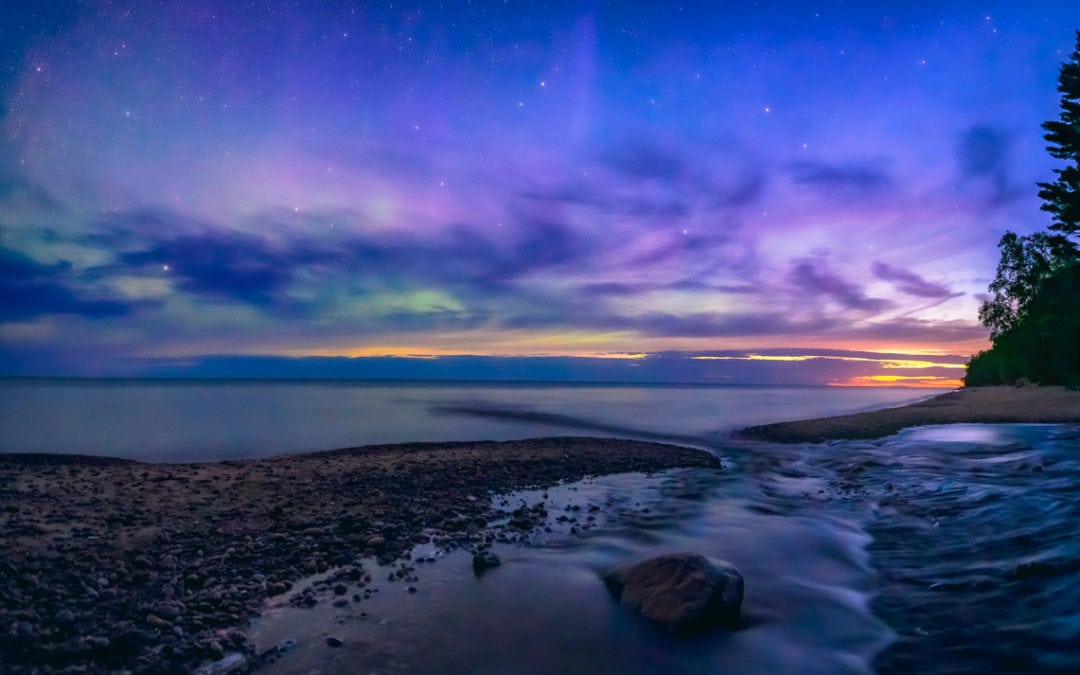 Capturing the celestial splendor of the northern lights in Michigan.

It’s no secret I love the aurora, known by many as the northern lights. Ever since I first saw them (accidentally) in July of 2018, I had been dying to see a “real” show—a good G1/G2 level event. So, when I saw there was a Labor Day aurora predicted, I had to chase it. (Wondering what G1/G2 stands for? Read on and we’ll answer the question.)

I’ve seen smaller shows numerous times—events where the aurora is barely visible along the horizon, at least in Northern Michigan. The camera can pick up the colors, but to the human eye, it looks like a whitish-gray band hugging the horizon and could easily be confused with light pollution if you’re not familiar with it. But, up until this point, I had missed out on every large aurora event. Whether it was my job that kept me from seeing it, or I was out of town, it never worked out.

This time, nothing was going to stop me. I hoped. 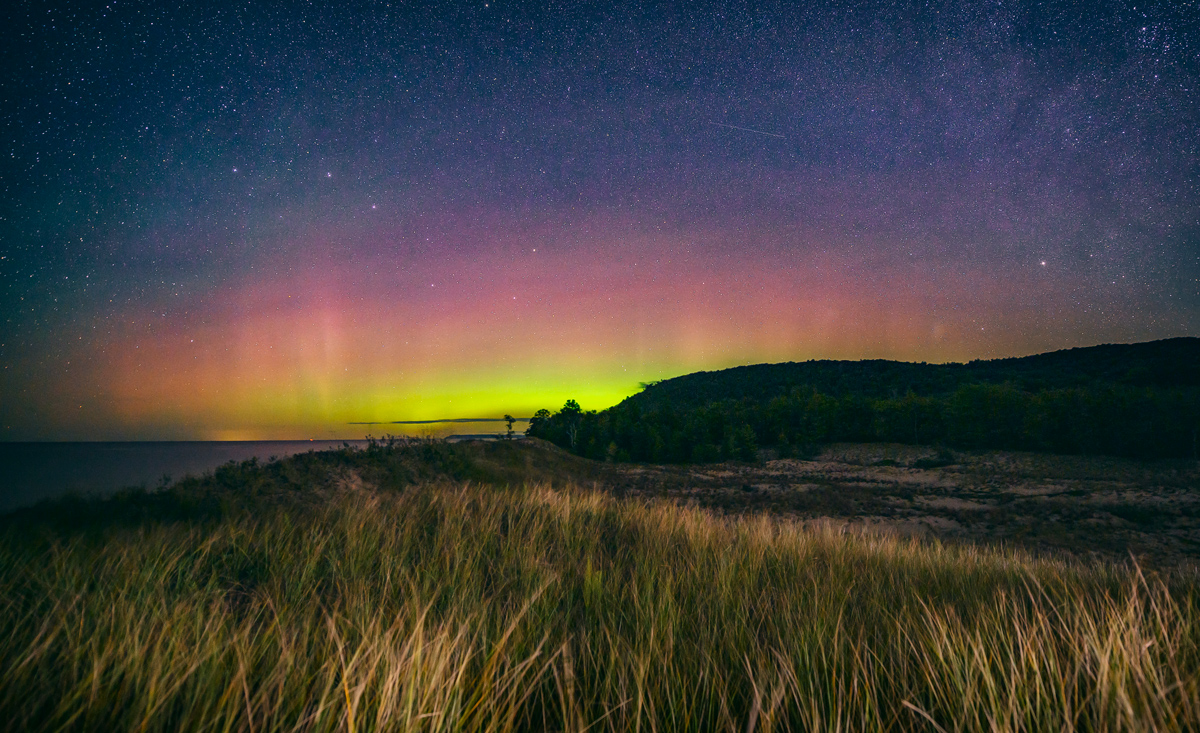 The start of an epic weekend. Little did I know that I’d be catching the aurora at both of Michigan’s national lakeshore. This Sleeping Bear Dunes shot overlooks the dune grass at the Lake Michigan shoreline.

The fun in aurora chasing, unlike looking for the Milky Way, is the unpredictability. Between the sun’s activity and the weather on Earth, planning becomes virtually impossible. We know the Milky Way will be there every night; we just need to pick a location based on light pollution and weather. Not so with aurora. Chasing the northern lights in Michigan requires planning, nimbleness and luck.

The whole week leading up to Labor Day, I was working in Decatur, Illinois. My downtime was spent looking at satellite images, light pollution maps and the long-term forecast. I wanted to get somewhere very dark for this. Based on the weather forecasts early on, I was targeting Copper Harbor, at the northernmost tip of the Upper Peninsula. Overlooking Lake Superior, it’s a solid Bortle 2—the scale used to measure light pollution—maybe even a Bortle 1 in spots.

Trying to book a hotel or campsite so close to Labor Day was virtually impossible, but I did manage to find one about an hour south of Copper Harbor. All good, right?

The forecast changed. On Thursday, my last day at the work event in Decatur, I canceled the hotel in Copper Harbor. I didn’t book anything else because, at this point, I had no idea where to go. Clouds were quickly becoming a significant issue and posed a serious threat to the aurora.

I arrived back home in Chicago around 11 p.m. on Thursday. I had a bunch of errands to run on Friday morning, thinking I had until Saturday to get everything done. But one thing every aurora hunter knows is to check space weather data. (I use the Space Weather app for real-time updates.) Around 12:30 p.m., I noticed the hemispheric power and the solar wind were both creeping upward—I knew I needed to go and I needed to go now. 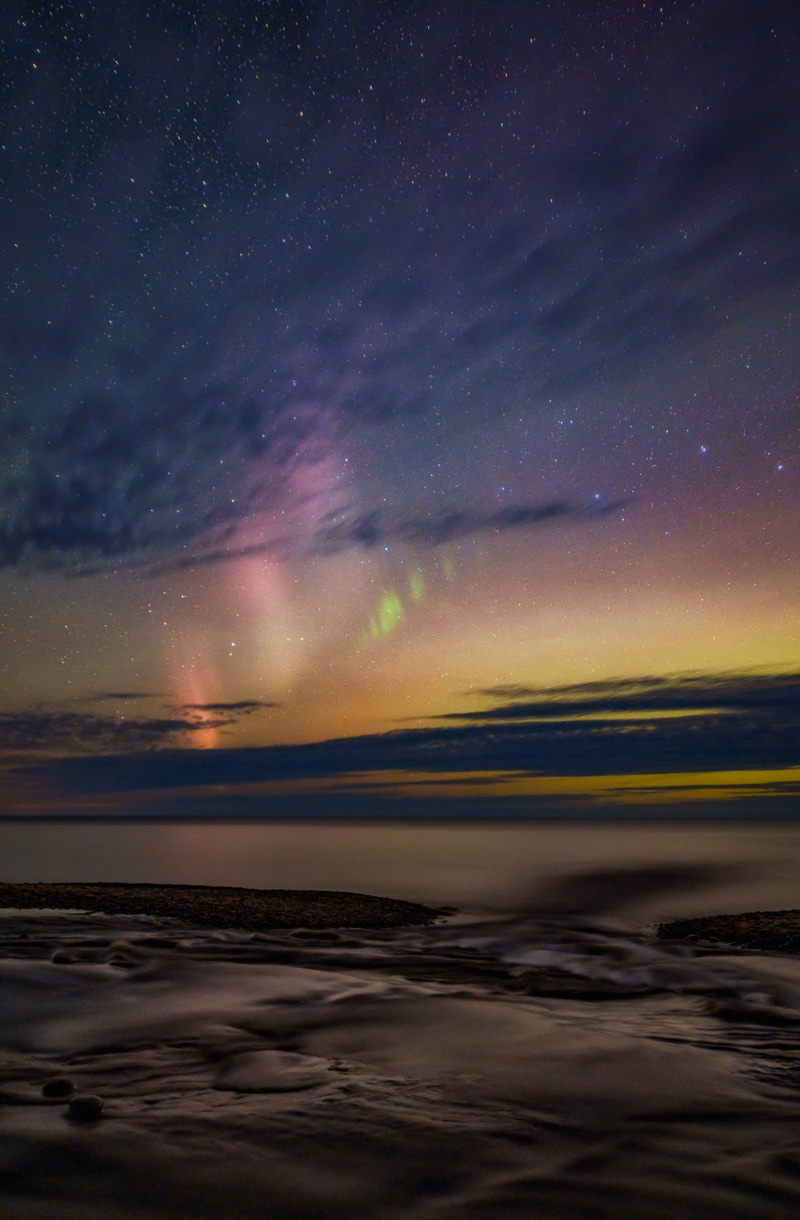 Checking the weather in various areas, I picked Sleeping Bear Dunes National Lakeshore for my first aurora stop. It’s about a six-hour drive from Chicago, which ended up being longer because, of course, Chicago traffic.

Read Next: When to Experience Northern Michigan’s Fall Color Season

Around 11 p.m., I arrived at North Bar Lake in Empire. To my surprise, I was the only one there. I have been to this location before; it was the spot where I got my first Milky Way reflection photo. What I didn’t realize was just how high the water level was—even on this inland lake. I wasn’t even sure if the Lake Michigan shoreline was accessible. So, I set up and took a Milky Way shot for old time’s sake. Then I looked for the northern lights. 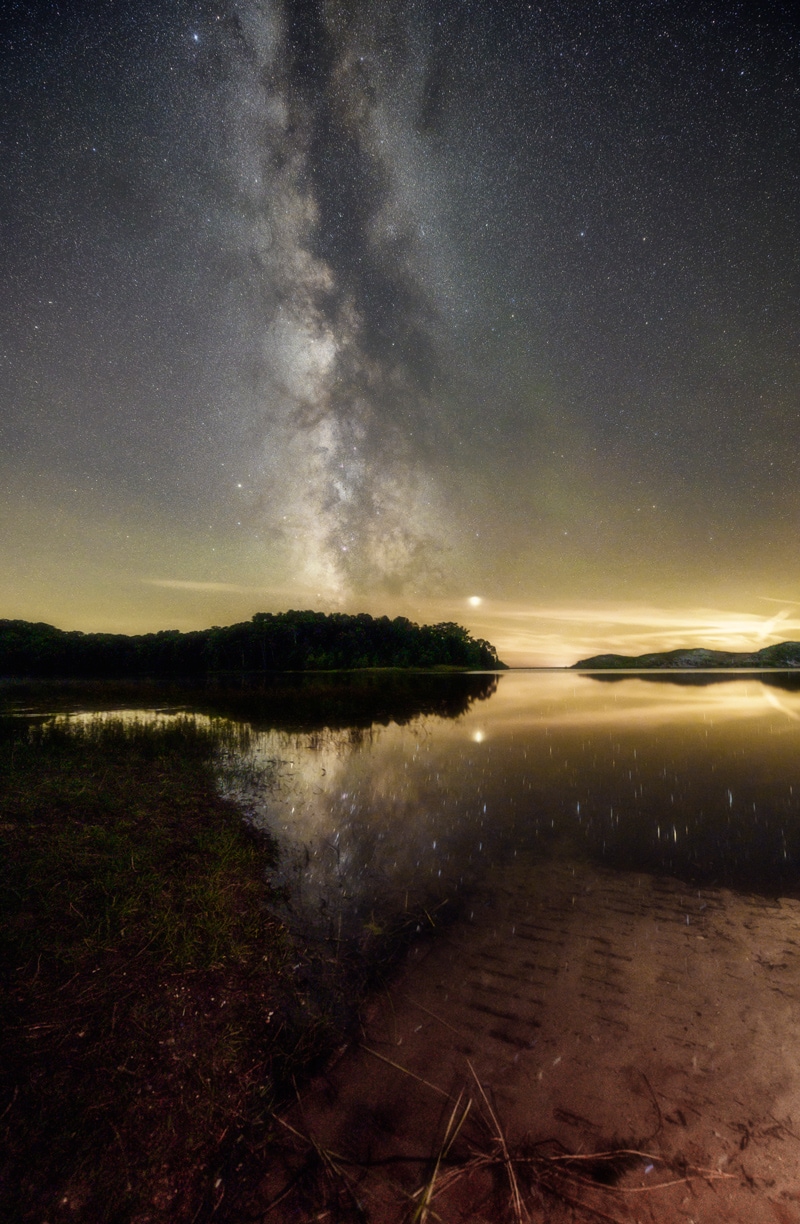 It wasn’t long until I was joined by a young family, armed with firewood. They asked me if I knew how to get to the lake, and I told them I wasn’t sure since the water was so high. I watched as they found a trail. I soon followed. However, I didn’t go all the way to the shore, as they had a pretty good fire going. I was content shooting from the trail.

Around 1 a.m., the family packed up and left. I took their place along Lake Michigan for a few shots. By this time, the northern lights started to show on the horizon and would gain strength as the night progressed.

I was beyond thrilled—August 30–31, 2019, ended up sparking a few G1-level events. It was the best show I’d seen so far, and I was glad to have made the drive since this display wasn’t predicted initially. (These predictions can be 24+ hours off.)

The following morning—actually, the same morning, the second day of my Labor Day aurora chase—I got a notice from the Space Weather app that the storm reached G2 level around 9 a.m. EST in the Empire area. “Oh, my word,” I muttered to myself. “It’s early!” This event was forecast to hit Sunday into Monday morning, and it was Saturday. Time to make a plan of attack.

After checking the weather and seeing that the forecast for the northern Lower Peninsula had changed to mostly cloudy, I decided to “mega rally” and drive the additional 6.5 hours to Pictured Rocks National Lakeshore in the Upper Peninsula. At this point, I had no idea what was going to happen. With the G2 level reached so early on, there was no guarantee this level of intensity would hold. But it was a risk I was willing to take.

With camera batteries charged and the car loaded up, I headed north. 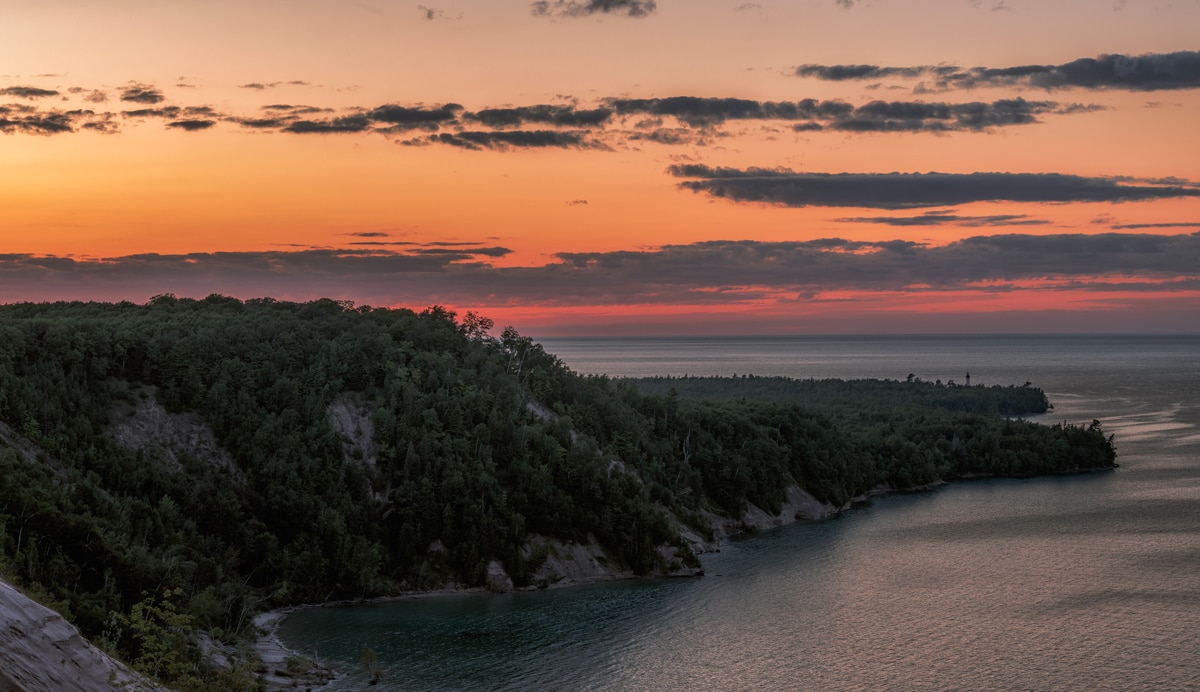 I arrived at Pictured Rocks right as the sun was starting to set. I attempted to snag a sunset shot from the Log Slide Overlook, but I was a bit too late. The view was stunning regardless.

There were two college-aged girls at the overlook. They asked about the northern lights—and I’m pretty sure they weren’t prepared for the amount of info they got. I showed them the Space Weather app and how it was still very active. By this time, the activity had dropped to the G1 level, but I told them if they hung out there, they would definitely see something once it got dark. Their faces lit up.

I contemplated staying at the Log Slide, too. But since I’d missed the perfect sunset shot, I had another image in mind, so I headed to Hurricane River. Back in May, I had tried to get a shot of the northern lights from here, but they never showed. I wanted redemption.

At this point, I no longer had cell service so I couldn’t monitor the data from the app. It was purely a wait-and-see game.

G1/G2 are values for rating geomagnetic storms—temporary disturbances of Earth’s magnetosphere. The solar wind stream or cloud(s) interact with Earth’s magnetic field, and the result is aurora. The higher the G number, the more severe the reaction. The current scale goes from G1 up to G5—a G5 event is pretty rare and is typically triggered by an Earth-facing coronal mass ejection from sunspots. We are currently in a solar minimum cycle, and sunspots are minimal to non-existent.

A coronal hole—a region in the corona that is less dense and colder than the surrounding areas. They can occur anytime but are most common during the declining phase of the cycle, or in a solar minimum. Coronal holes occur when the sun’s magnetic field is open to interplanetary space. What is nice about coronal holes is they typically last a few solar revolutions, which allows us to get the closest to accurately predicting an aurora event. The month prior to the Labor Day event, this same coronal hole sparked a G1-level event in early August. Granted, there is a margin of error of 24 hours or so, but this ability to predict is still quite amazing. 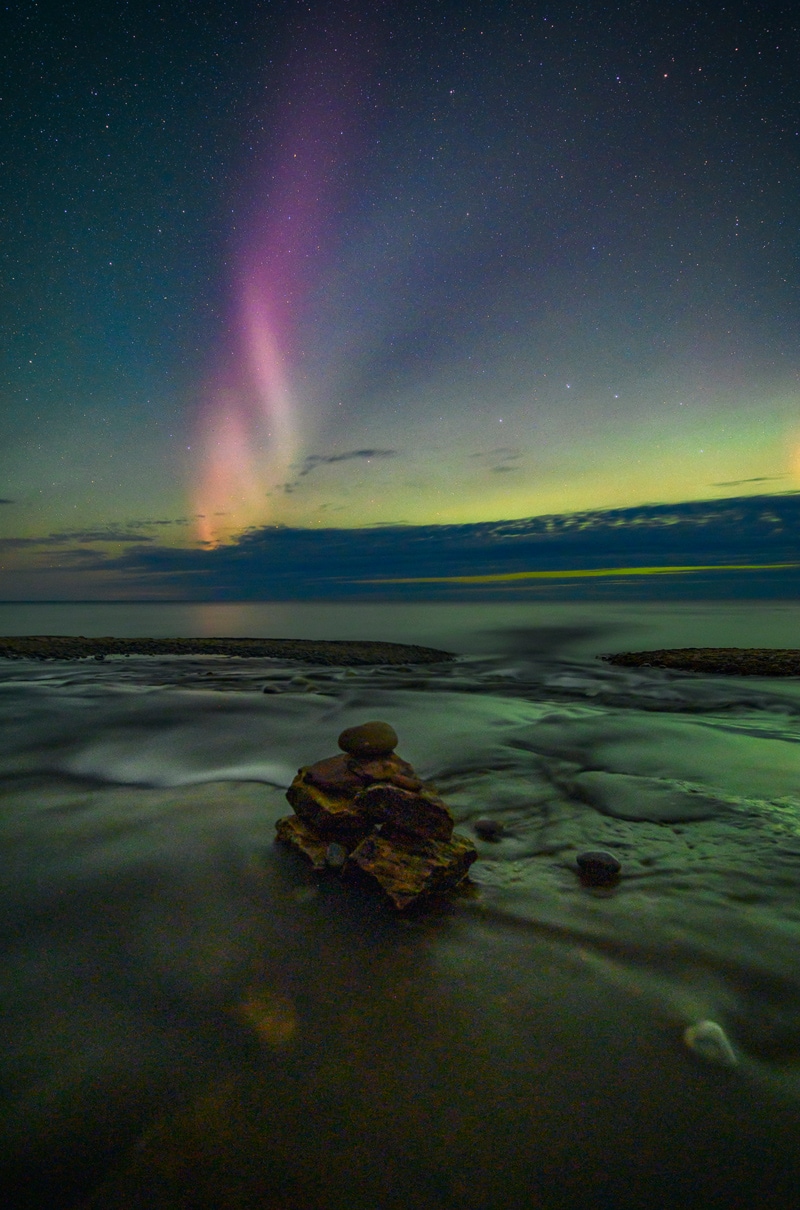 As the light faded, the aurora started to appear, and boy was it beautiful. Early on, the lights showed as auroral pillars. They moved gracefully on the horizon, ebbing and flowing. The pillars continued to dance for a good three to four hours before the intensity dropped off. During this time frame, I saw a few people come and go. (I figured there would be other spectators, as this event was hyped pretty well by the media.)

Once the intensity dropped off around 12:30 a.m., clouds started to roll in and most people packed up and left. I committed to the entire night, though, as I suffer from the world’s worst FOMO (Fear of Missing Out). It proves to be beneficial on occasion.

The clouds began to clear around 1:30 a.m. I was shooting from behind some trees when I noticed this purple band in the sky above the aurora. I had a hunch; this was a STEVE—a Strong Thermal Emissions Velocity Enhancement. A STEVE is an aurora-like phenomenon, but it’s not an aurora. Researchers at the University of Fairbanks in Alaska determined the wavelength that makes up a STEVE is different from the typical aurora, making it a separate phenomenon. The colors are mauve and occur at lower latitudes. 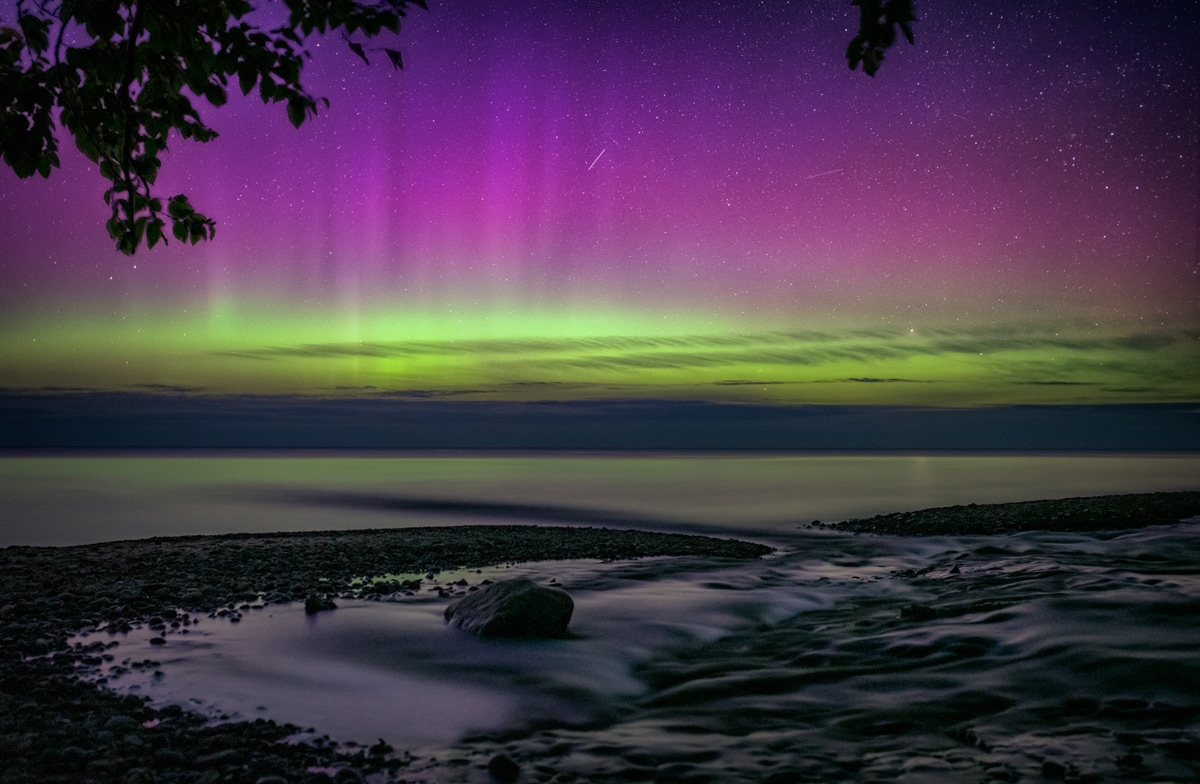 The aurora glows as the last light of day fades. I jumped for joy as the pillars danced along the shores of Lake Superior at Pictured Rocks National Lakeshore.

Once I hit the sand, I looked overhead and saw a flash of “picket fencing” light streak across the sky. Aurora chasers use this term to describe the way the light looks, differentiating a STEVE from a regular aurora. These lights form a line of dashes, which resemble the tops of a picket fence.

It really was a STEVE! I frantically tried to set the camera back up and managed to snag a few shots. Even though I missed most of the picket fencing, I took a few photos of the Milky Way with the STEVE—truly a bucket-list shot.

The show was not over yet. Another bank of clouds rolled into view and covered up the lights for another hour, give or take. Then the night sky revealed one of the most incredible sights I’ve ever seen. 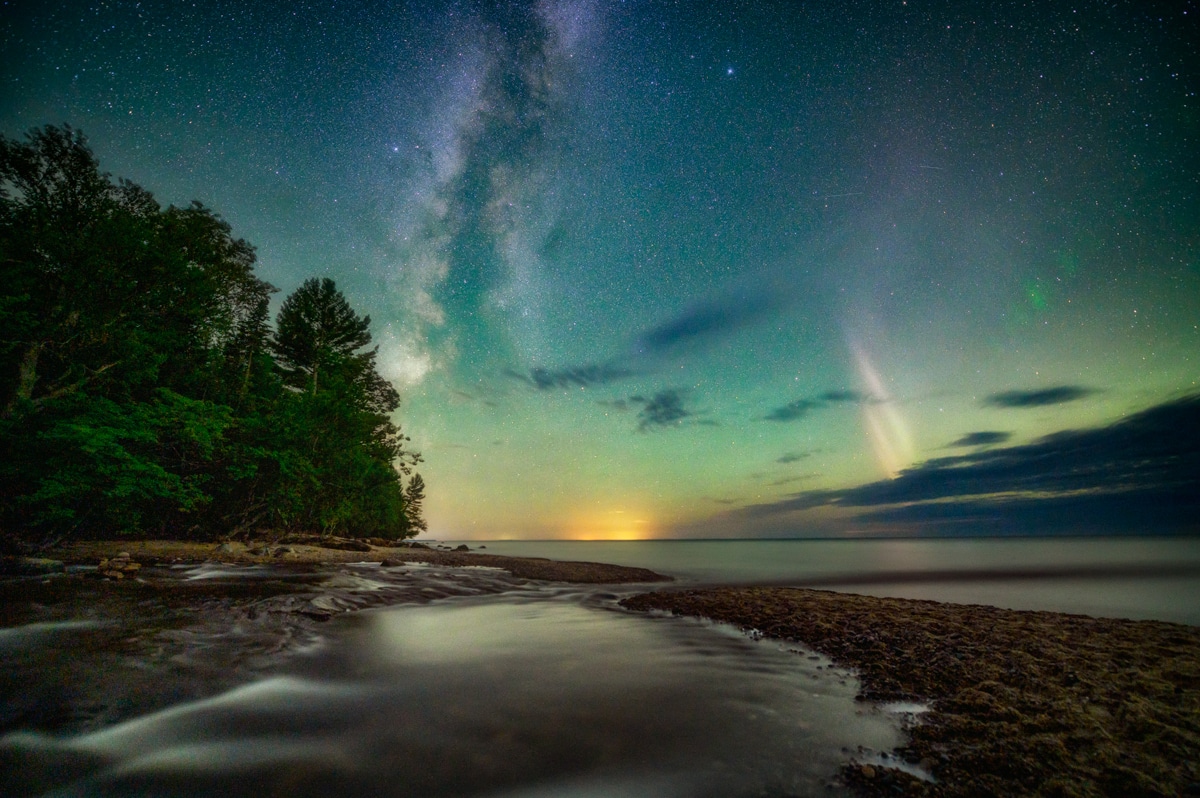 Milky Way and Steve. Bucket list shot right here. Steve’s are relatively rare, so my excitement at this development was off the charts. Hurricane River (Pictured Rocks) redemption shot complete—and then some.

There have only been a handful of times where I’ve been left speechless. This was one of them. The aurora extended almost overhead, and it was pulsating. For a minute or two, I just stared at the sky above—thoroughly lost in the moment. I completely forgot about the camera.

The pulsating eventually calmed back down into pillars. As the night faded into day, the show continued. The blue hues from twilight created a rather dreamy color cast, which is fitting since the entire night felt like a dream.

Despite having to drive back to Chicago, I can say that my whirlwind Labor Day aurora trip was 100 percent worth the 1,300+ miles of chasing light and dodging clouds. Even as I write this, it’s hard not to get emotional. The aurora has always captivated the human spirit and imagination and serves as a beautiful reminder of the forces at work that keep us safe from a chaotic and violent universe and bring wonder and awe to our lives.

Marybeth Kiczenski is a night sky-obsessed freelance photographer/writer based out of Chicago. As a Michigan native, she enjoys traveling to and documenting the beauty of her home state. Follow along at shelbydiamondstar.com or @shelbydiamondstar on Instagram and Facebook. 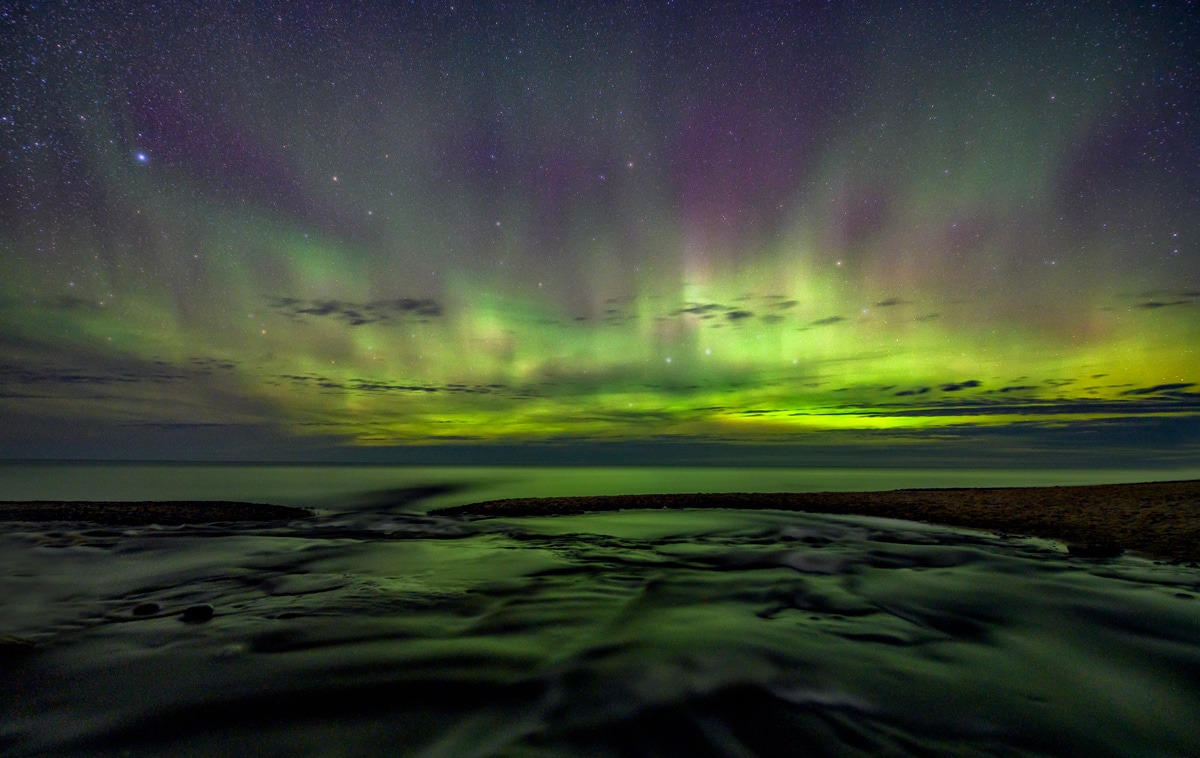