When Baseball Was the Only Game in Town 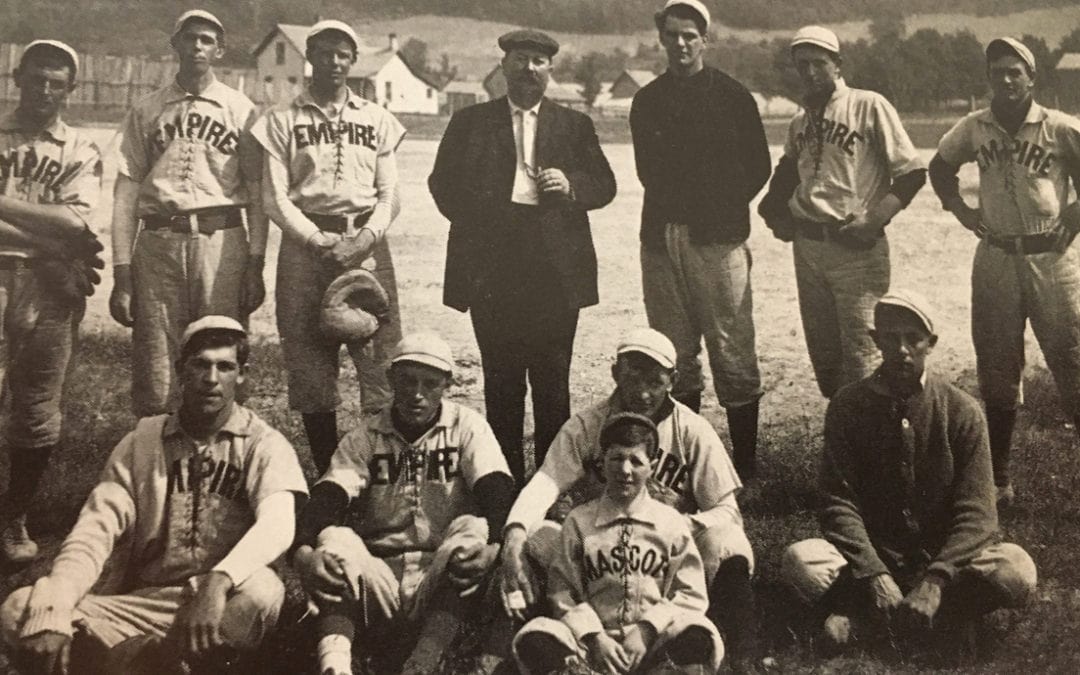 In the early 1900s, Sundays meant game time in Leelanau County as hundreds of spectators came to watch the Empire Greys take on one of several Northern Michigan baseball teams.

This piece was featured in July 1989 in the department “Looking Back.”

Picture a brilliant, summer Sunday afternoon in the lumbering community of Empire in 1909. In the shadows of the Empire Lumber Company along Lake Michigan, the whole town has turned out to watch a baseball game. They pack the bleachers and spill out onto the grass along the foul lines on blankets and chairs.

The home team is the beloved Empire Greys, a rugged, enthusiastic bunch made up of local schoolboys, farmers, merchants and journeymen workers at the lumber company. Their opponents on this given Sunday might be from Honor, Traverse City, Buckley, Grayling or any other lumbering towns accessible by rail. They’ve brought along a few hundred fans of their own who have come by way of the “Baseball Special,” a low-priced ride on the Manistee and Northeastern Railroad which has been scheduled on Sunday to accommodate the baseball crowds. When the umpire crouches behind the pitcher and yells, “Play Ball!” an anxious roar rises from the crowd. This is the only game in town.

“That was about all there was to do on Sundays,” recalls Hilda Joy, who, at age 96, could look at the Greys’ team picture and rattle off the name of each player. “There were big stands that were usually full so a lot of people had to sit on the ground. My mother had a chair she’d carry to every game. She loved her baseball.”

And so did the rest of the town, because these were the “Celebrated Empire Greys”—at least that’s how publicity posters billed them. “They were one of the best teams in the state,” Joy remembers. “Sometimes they even went to Detroit and Flint to play.”

Empire’s Fred Taghon, who knew many of the original Greys in their later years, attributes the team’s success to local lumber baron E. Harvey Wilce. “Empire had the advantage of Wilce being a big baseball fan,” says Taghon. If he found a good ballplayer working along the coast, he’d dangle a carrot in front of him by offering maybe an extra nickel an hour to work and play ball in Empire.”

The stalwarts of the Greys were men with names that sounded like they belonged to ballplayers, like Puggy Haskins, Mert High, Claude Beatty, Irving Quick and Ernie Groner. There was even a player named Ted Williams, who neither Joy nor Taghon can recall, perhaps because he didn’t hit the ball with the same flair as the famed Red Sox slugger of the same name. The manager of the crew was Al Willard, a distinguished bookkeeper from the mill. And, just as the Mudville nine had its Casey and the Yankees had Babe Ruth, the Greys had their own showman in first baseman John Winters. “He was the ringleader of the gang,” says Taghon. “He was a friendly guy and a good BS’er. He’d be on the end of a lot of deviltry and tomfoolery.”

Taghon wasn’t around to see Winters and the Greys in their prime. Instead, he got to know them in the 1930s, when the team would reunite for Empire’s “Homecoming Weekend” each summer. For the community, the focal point of the weekend was the big Saturday night homecoming dance. But for Taghon and other local boys who played for Empire’s independent youth baseball squad, the highlight was the Saturday and Sunday homecoming games which gave them the chance to battle the original Greys.

“The Greys were mostly 55 to 60 years old, so we had ‘em whipped physically, but they whipped us mentally. They were cagey and could talk you out of a ball game, and were constantly talking to us and baiting the umpires,” Taghon says. One favorite barb directed at an umpire that Taghon remembers was, “Hey ump, you could see better than that with a glass eye on the end of a fish pole.”

Taghon and his teammates also had the opportunity to play visiting towns, hopping in the back of a pickup truck for a day trip to Northport, Omena, Peshawbestown or Frankfort. They even rowed over to South Manitou Island once to play lumber workers there, on the premise that the home team supply the “moonshine and home brew.”

Today the team is remembered only by a few delicate black and white photographs in the Empire Area Museum, and the colorful memories passed down by a select few like Fred Taghon and Hilda Joy.