It was supposed to be a one-time adventure; cross Lake Michigan on a stand-up paddleboard. But when the guys saw the awareness their trip raised, they made a pact to cross all five. Since then, their nonprofit, Stand Up for Great Lakes, has donated $50,000 (and counting) to organizations that work to protect our magnificent waters.

This story is featured in the July 2020 issue of Traverse Magazine. Get your copy. 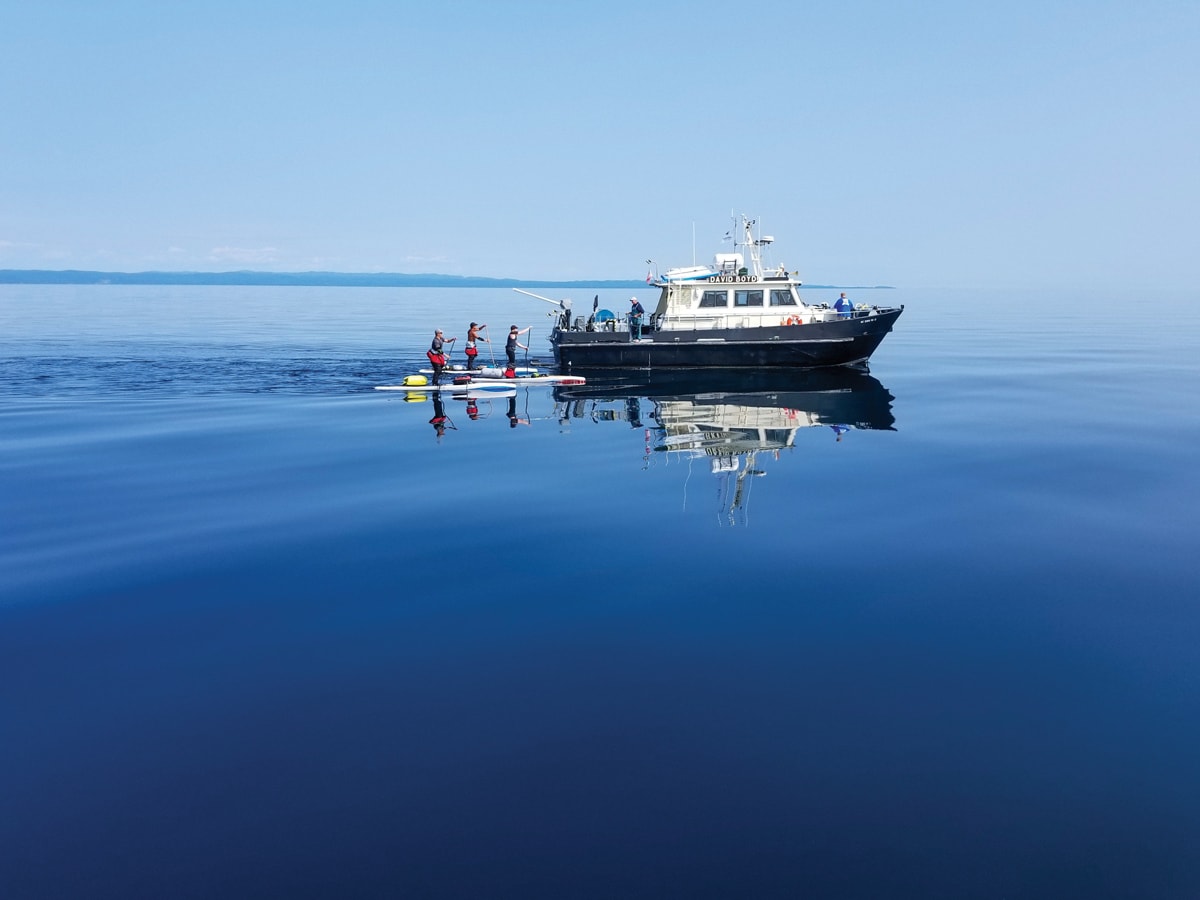 I grew up on the Great Lakes, but was still so naive and unprepared for how big and spectacular they actually are. Crossing Lake Michigan was supposed to be a one-time thing; we called it The Great Paddle. Standing on one side and not seeing the other shore left us with questions. Is it possible? How long will it take? Little did we know we would be experiencing 6-foot waves, 37-degree air temperatures, a spectacular sunset, northern lights, hypothermia and the hardest thing we had ever done, both mentally and physically.

The five original members of Stand Up for Great Lakes: Joe Lorenz, Jeff Guy, Nick Darga, Joel Mueller and me, Kwin Morris. (After the Lake Michigan paddle, Joe, Jeff and I decided to do all five lakes together.) The five of us saw the most amazing northern lights and stars while crossing Lake Michigan. At one point during a break, in the pitch black, one of us unknowingly dropped a paddle. It luckily struck the board of another paddler, and he was able to grab it. Two people fell in the water that night, too. And a GoPro was dropped in 200 feet of water. A professor from MIT did a calculation based on currents and sent a diver to find it. They actually found it!

Unprepared. It was 70 degrees onshore. I had no idea when we reached the middle of the lake it was going to be 37 degrees. My feet were wet for 24 hours. No warm clothes. My LifeStraw required drinking ice-cold water right out of the lake. My drysuit had never been worn before, so it cut the circulation off from my hands and feet. We paddled over the deepest part of the lake—more than 900 feet of water below us. It took 24 hours to make it across.

Ford Motor Company sponsored and made a short documentary on the Lake Michigan paddle. 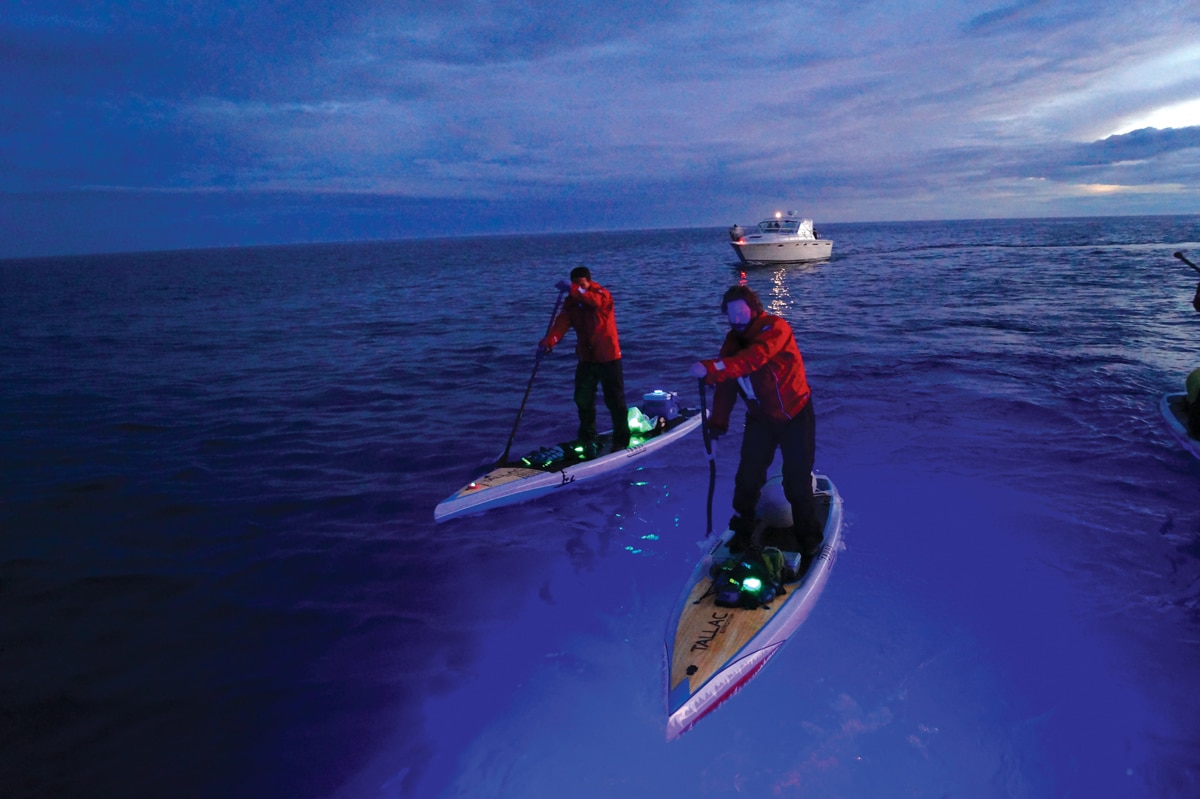 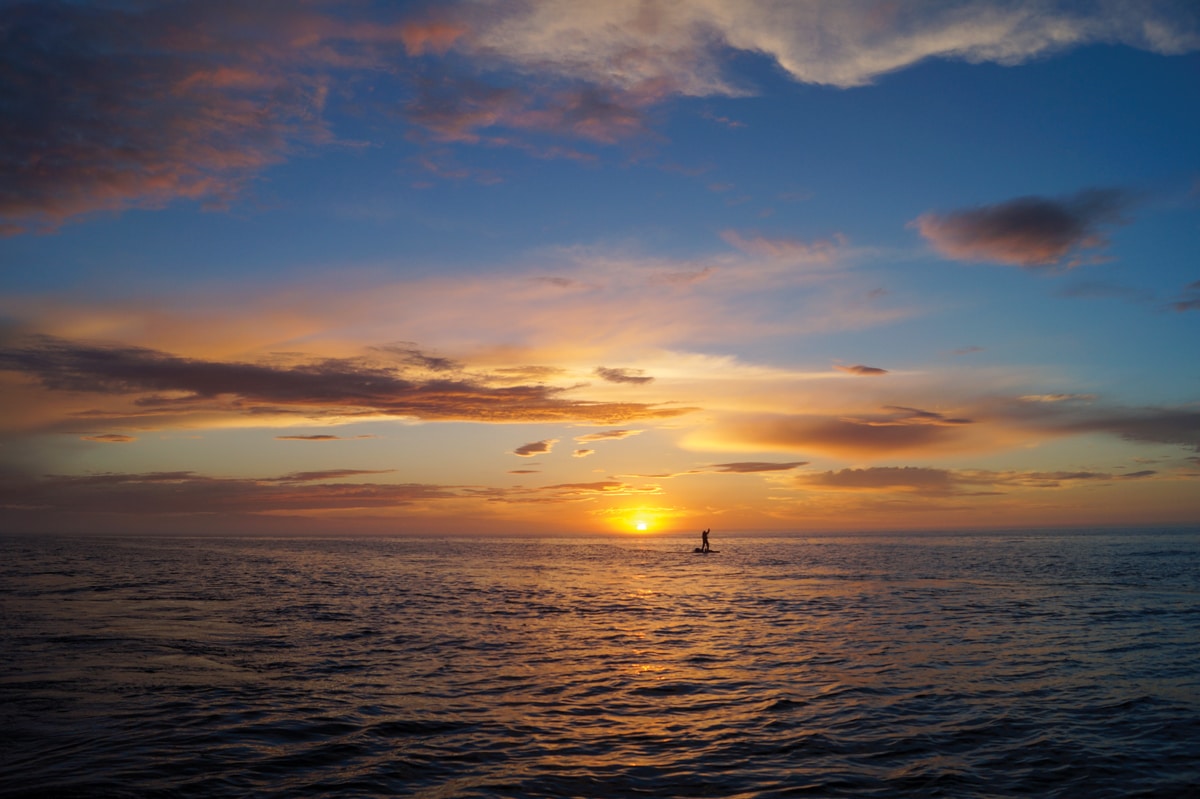 Right after crossing Lake Michigan, we were contacted by the Thunder Bay National Marine Sanctuary in Alpena and their team asked if we’d be interested in partnering with them. Together we planned a route—a 92-mile crossing across Lake Huron. We thought Lake Michigan was a hard paddle, try adding 30 miles of open water.

Blue lights. One of our safety boats had blue LED lights, thankfully. At night, we had 2-3 footers coming out of nowhere from behind us and the lights helped us navigate the waves.

Sunset is always one of my favorite times. We take a longer break, soak in the moment and suit up for the long night. On Lake Huron, it rained for seven hours and we had two storms separate us. Just before sunset, the clouds parted and gave us an epic show. Just what we needed at just the right time. Normally we are halfway done with a paddle at sunset. This time we weren’t even close.

Huron was my hardest trip—physically and mentally. It took a toll on my body and mind. After you push your body to the extreme limit, when you finish, it’s that much sweeter. This picture (below) in Tobermory was right after 28 hours straight of paddling. It had just stopped raining and the sun came out. 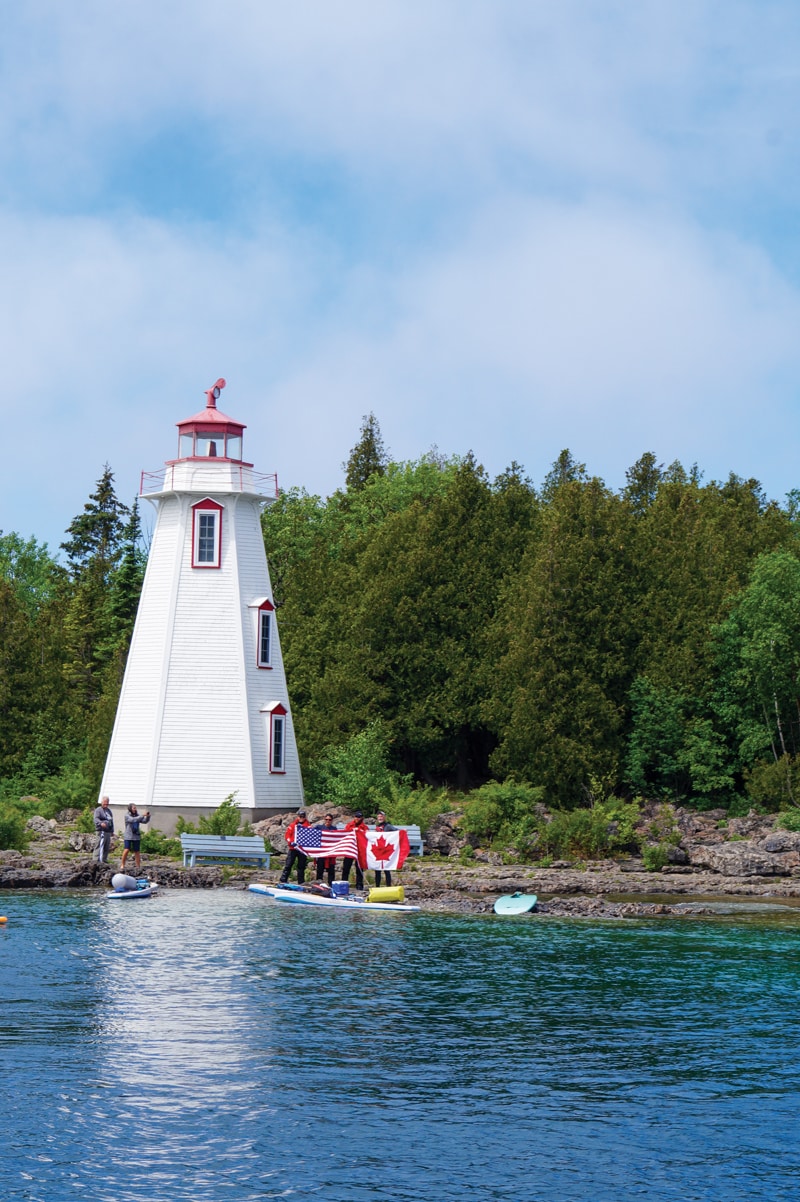 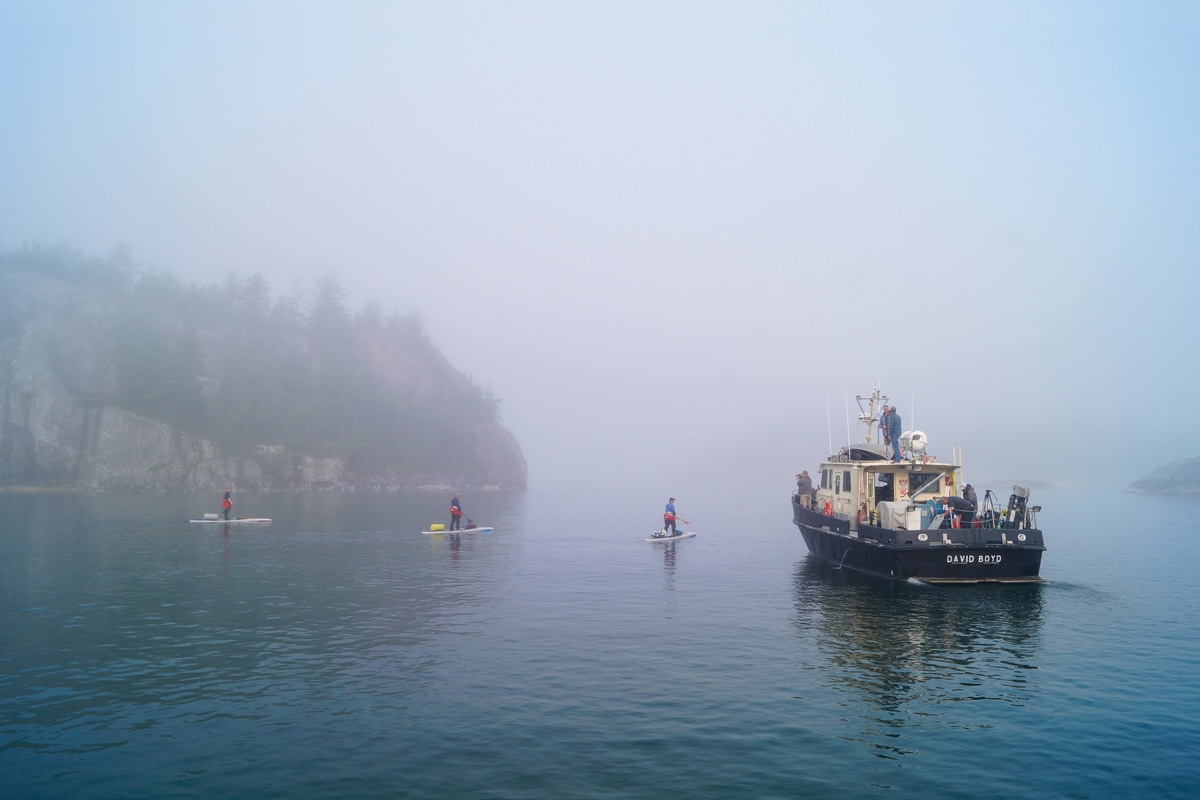 We wanted to do something different; not just a Point A to Point B. We decided to start at one of the most remote and rugged parts of the Great Lakes—it’s a sacred location to Native Americans—Sinclair Cove in Ontario, near the century-old Agawa Rock Pictographs. We then paddled out to the Edmund Fitzgerald, which we had to get a permit for, and did a special ceremony over the ship, placing a wreath of white carnations and grape vines over the wreck to give tribute to the sailors who perished.

The Lake Superior start location was the most beautiful. We started the paddle at Lake Superior Provincial Park, which had huge cliffs, and a thick fog bank that lifted mid-paddle. Superior was roughly 60 miles and it took us 22 hours to cross. It was our shortest paddle, but it was the lake that scared us the most. We had to cross several freighter shipping channels, and six ships passed us in the night.

We had GPS, a satellite phone and a depth finder. This picture (below) shows what we thought could have been a shipwreck. The historical society has plans to go check it out at a later date! 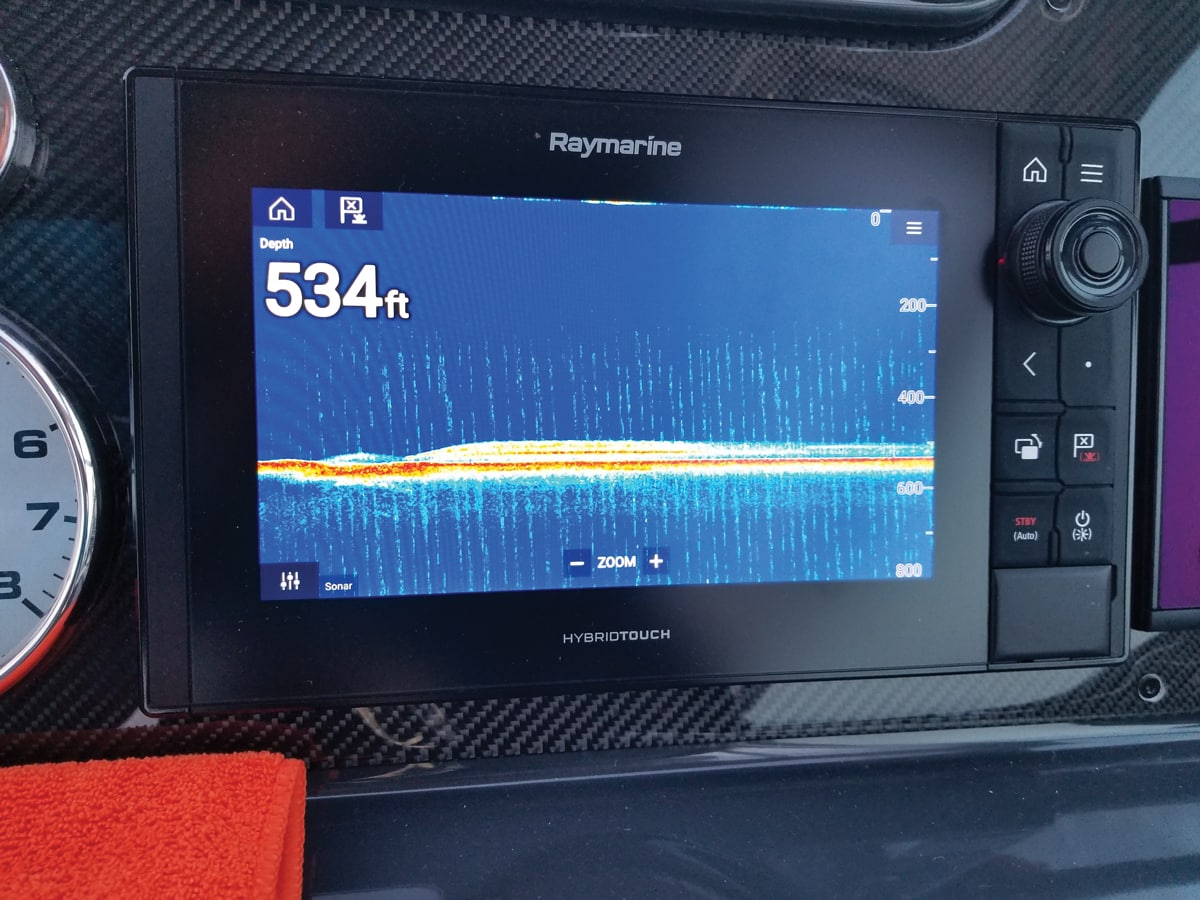 Every time we finish a paddle, there is a group of people consisting of family and friends waiting for us. On Lake Superior, we finished around 5 a.m., so that took some dedication! Each time we finish a paddle, I cry like a baby because it is so hard and so worth protecting these amazing bodies of water. We found huge sheets of plastic in the remote parts of the lake, which was not only a surprise, but also depressing and heartbreaking. 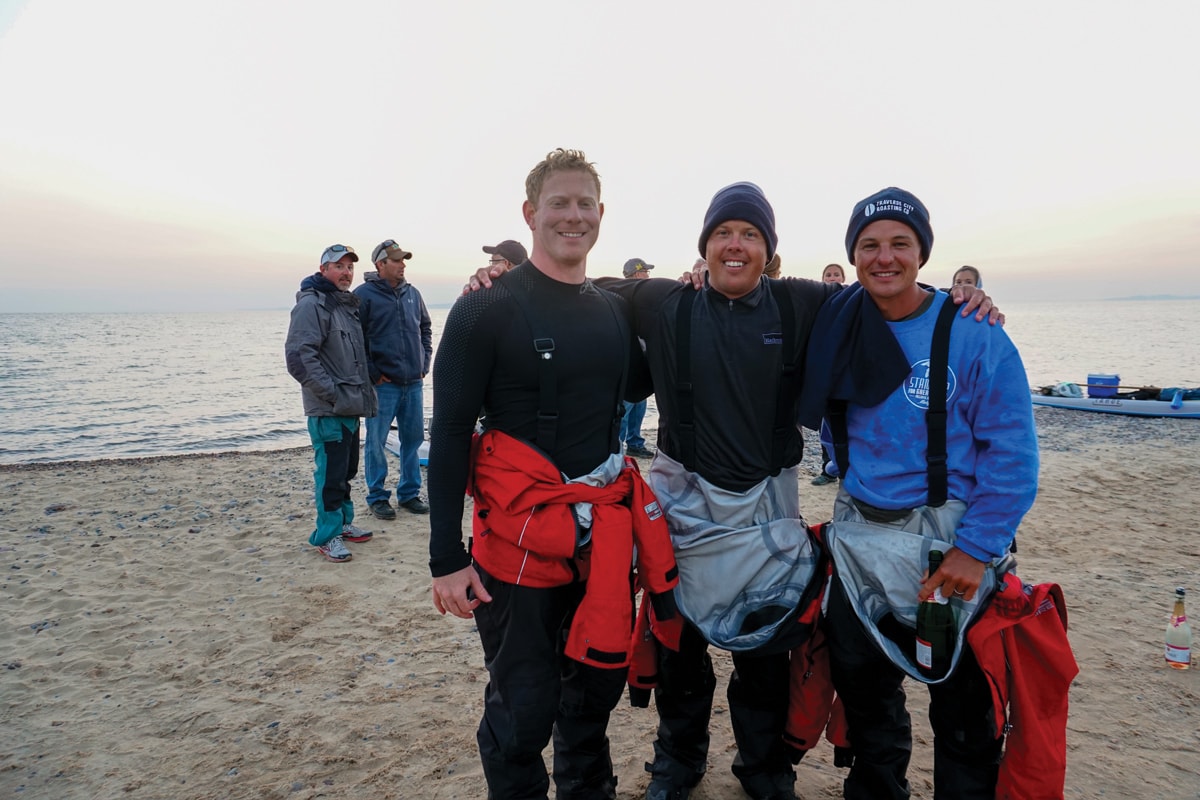 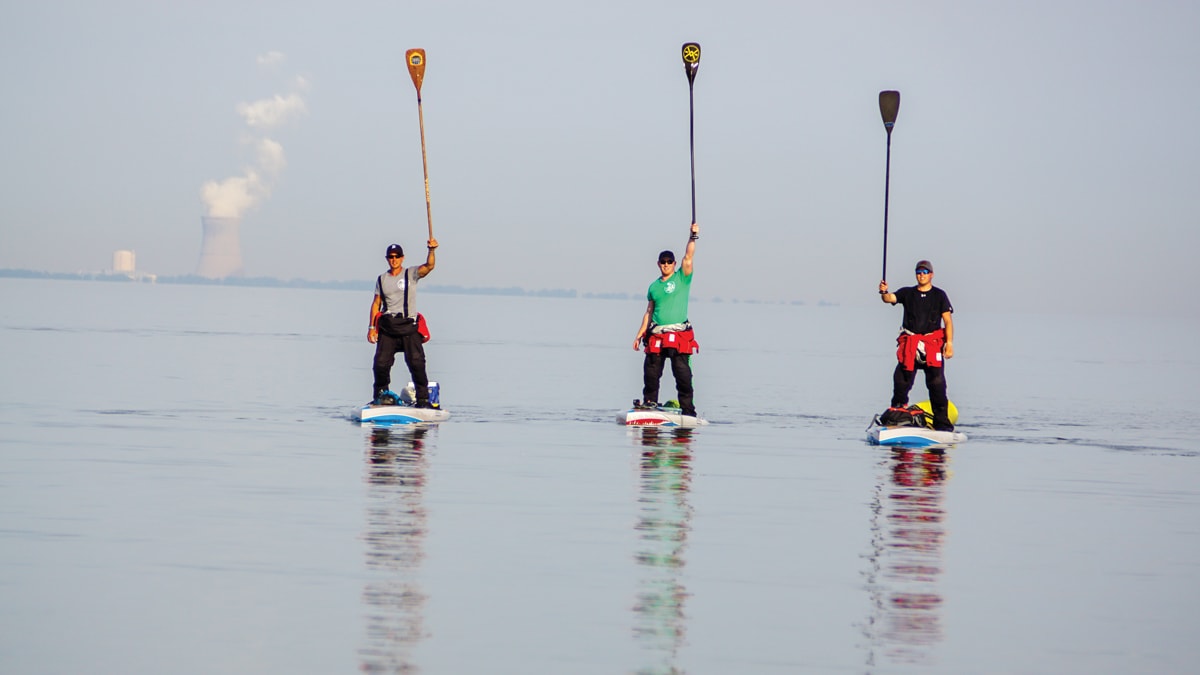 Different. Like the Superior Trip, we wanted to do something different. We decided to start in downtown Detroit, paddle the river and then make our lake crossing. We not only wanted to see the skyline of Detroit but also show some of the most polluted areas on the Great Lakes.

Favorite moments of the paddle: We got to paddle past Joe Louis Arena as they were tearing it down, and the sunset was breathtaking—we couldn’t see land in any direction. We were about halfway done with the crossing at the time. It was roughly a 70-mile paddle and took us 24 hours to complete. We had a headwind almost the entire time. At one point, it was pushing us backward faster than we could paddle into it!

We feel that we have this special niche that gets people paying attention to the lakes, and we do it in a positive light. We’re highlighting organizations that are fighting to protect our lakes and raising money to support their work.

The Lake Ontario crossing was originally planned for June 2020, but we had to postpone due to the pandemic. We’re now planning this last lake crossing for June 2021. We will be paddling from Toronto to Niagara and then back to Toronto. Our route hasn’t been finalized yet, but we’ll most likely be stopping at the mouth of the Niagara River. Stand Up for Great Lakes will be raising money for Lake Ontario Waterkeeper. 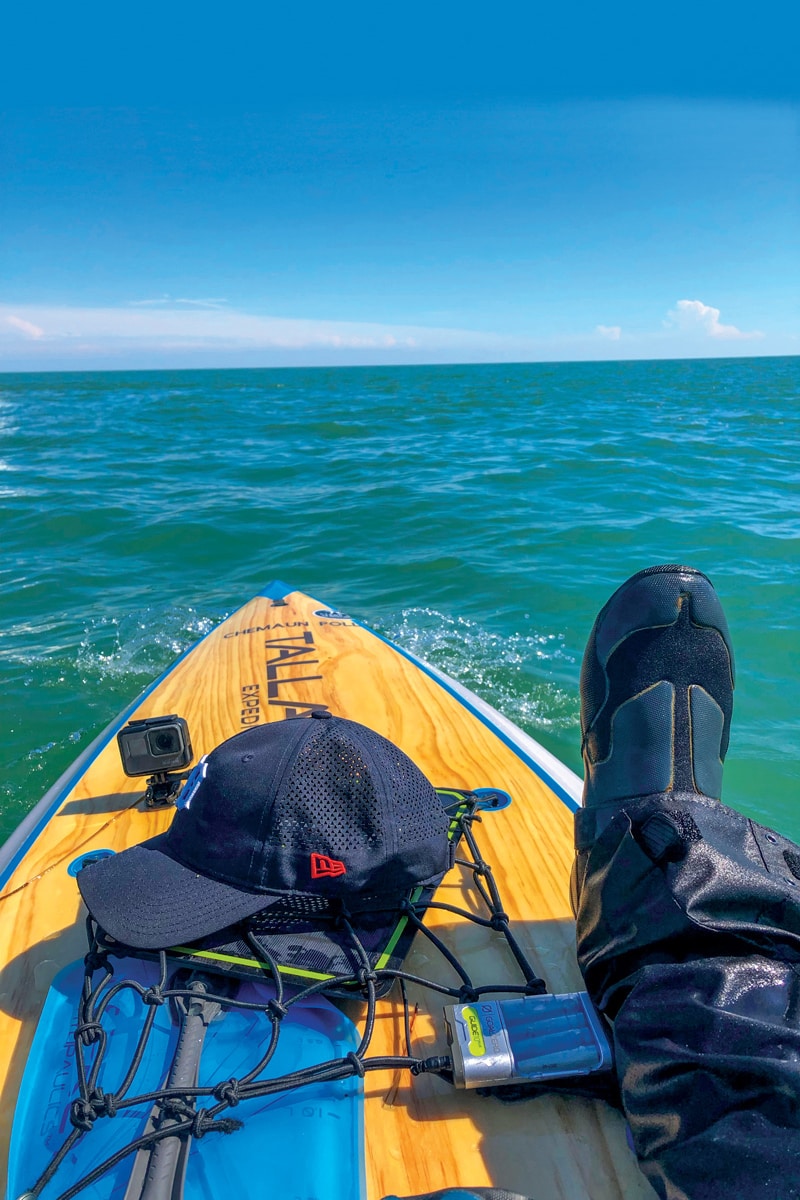 On August 1, Stand Up for Great Lakes will take on the Chain of Lakes Water Trail paddling roughly 50 miles from Six Mile Lake to Elk Rapids (the full water trail is 99+ miles long).

Elk River, Elk Rapids // Access at Rotary Park, just before the bridge on US-31 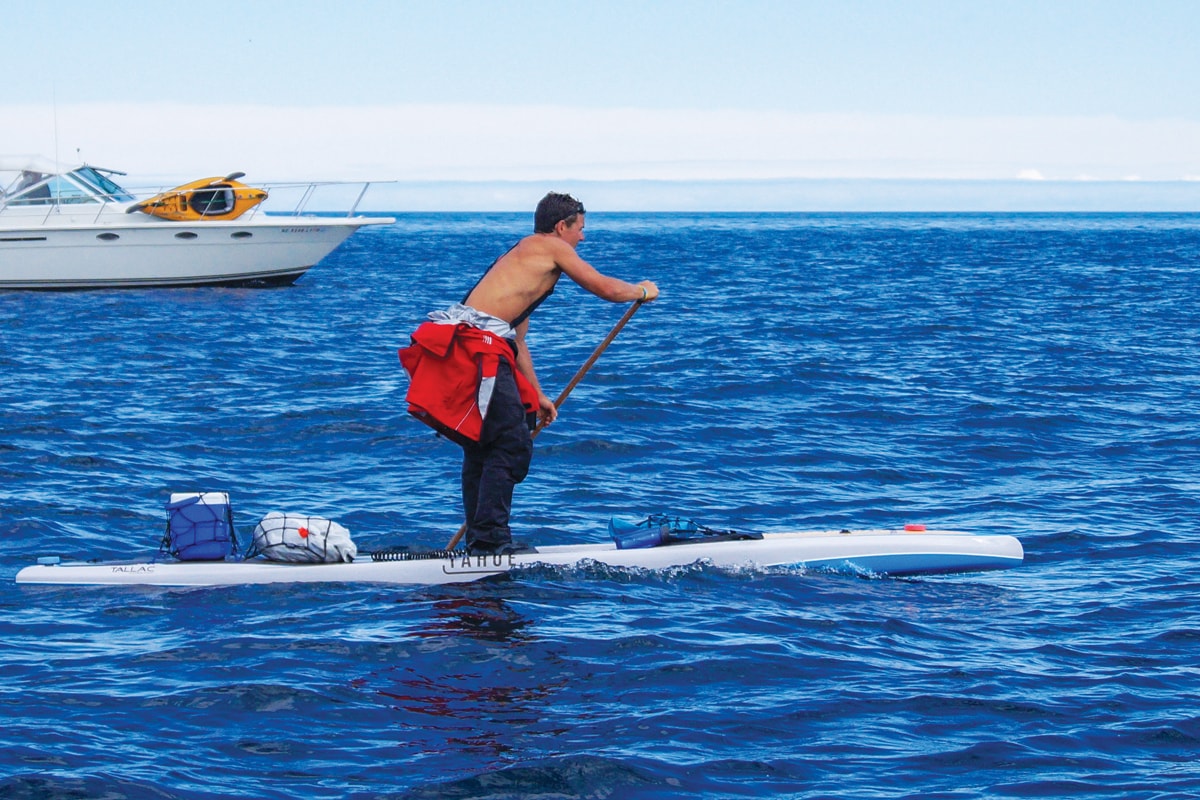