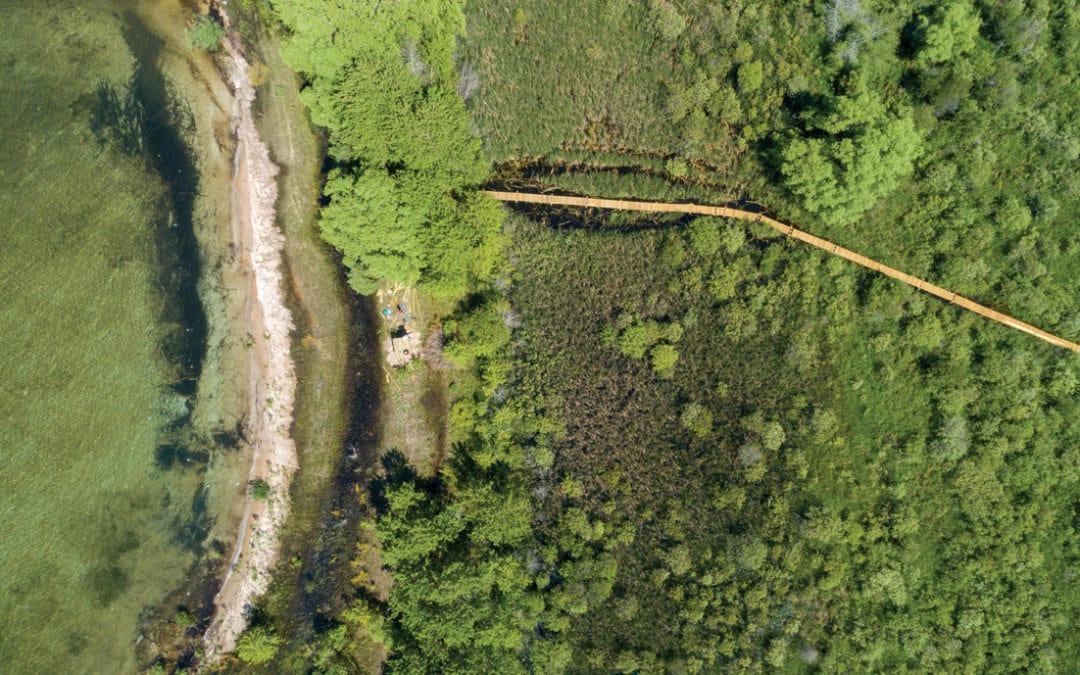 At Traverse, Northern Michigan’s Magazine, our mission has always been to celebrate our lands and waters, and we honor that in every issue. As we celebrate our 40th anniversary in 2020, we’re taking a look at the incredible work done by Northern Michigan conservancies, which combined have preserved more than 136,000 acres (and counting) over the last 50 years.

Founded in the early 1970s, Little Traverse Conservancy (LTC) was one of the first land conservancies in the state. By May 1987, LTC had created 36 nature preserves totaling 2,000 acres of land, as highlighted in the Traverse feature that month, “Walking in the Wild.” In the decades since, LTC has celebrated many big wins, measured by far more than the number of acres protected and preserves created.

Of the many cherished projects we’ve written about over the years, this attempt to save an old-growth forest, including red oaks up to 150 years old, stands out.

The rare forest, located on Burt Lake in Cheboygan County, was owned by the Devereaux Timber Company, which had plans to log it in the mid-1980s. Tom Bailey, the executive director of LTC from 1984–2018, described the property as “one of the least disturbed tracts of trees in northern lower Michigan” in the April 1985 issue of Traverse. When asked if the forest would survive, Bailey said, “The coin is in the air right now. I don’t think that anyone is sure where it’ll land.”

But the forest did survive. Conservationists across the state rejoiced in 1987 when the largest stand of old-growth hardwood trees in the northern Lower Peninsula was saved. Thanks to the efforts of many, it’s protected by LTC’s Chaboiganing Nature Preserve and Indian Point Memorial Forest, owned by the University of Michigan Biological Station.

While LTC has protected more than 60,000 acres of land across its five-county service area, the creation of community nature preserves has been an emphasis in recent years, including Duncan Bay Nature Preserve, established in 2017 and located within walking distance of downtown Cheboygan. With a new trail completed in 2019, the preserve has become an incredible community asset that has helped the City of Cheboygan apply for, and recently receive, Pure Michigan Trail Town designation.

“As our land conservation success grew, so did our need to be good stewards and our commitment to the communities we serve,” says current Executive Director Kieran Fleming. “Duncan Bay is a great partnership project with the City of Cheboygan that includes a wonderful new trail and Lake Huron overlook at a location that was previously inaccessible. It perfectly complements Cheboygan’s new designation as a Michigan Trails Town.”

Since it started in the ‘70s, LTC has been joined by several other land conservancies in Northern Michigan, all sharing similar missions to protect our precious land and water and preserve it for future generations. Our Traverse team loves sharing their stories and is constantly amazed by, and thankful for, the work they do. We will continue to share their victories each month in print in our Love of the Land department. (Read some of those stories below.)