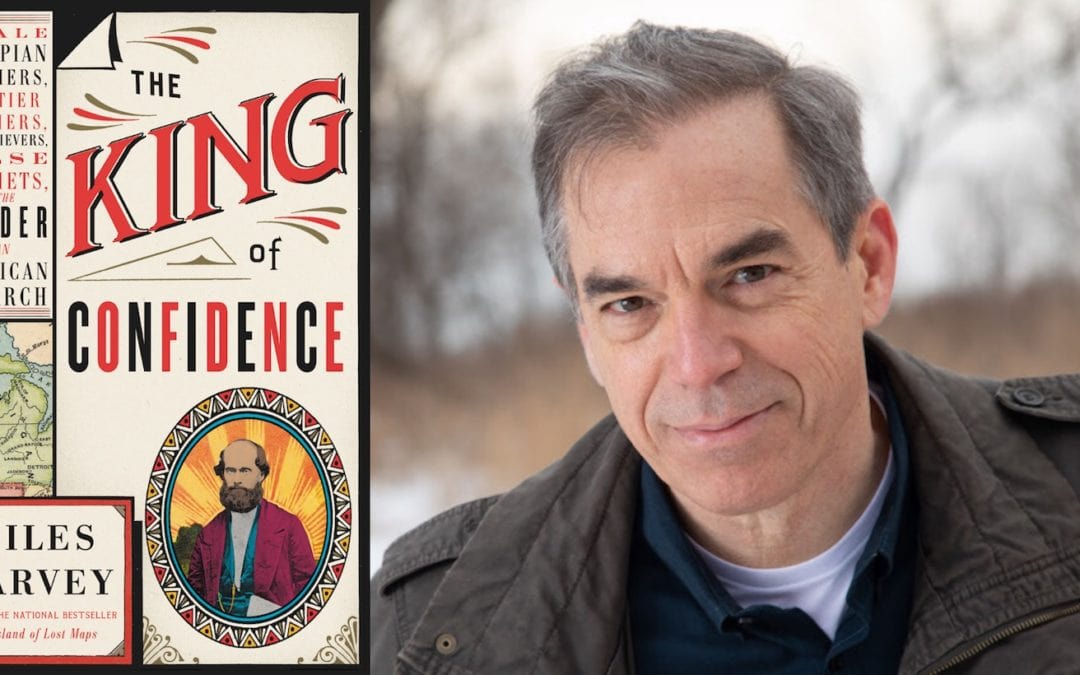 Miles Harvey will join the National Writers Series on July 14 at 7 p.m., talking about his new book, The King of Confidence.

Register for the free, online event.

Miles Harvey didn’t set out to write a Mormon story when he started researching James Jesse Strang, the self-proclaimed “king of earth and heaven”—and Beaver Island.

“I didn’t see him as a weird Midwestern story or (Mormon) story. I saw him as a lightning rod for all the enthusiasm, prejudices, activities of that era,” Harvey says.

That era, the mid-1800s, was an era of change, upheaval and uncertainty. Sound familiar?

“I don’t know if I would have written the same book if I hadn’t been living through the Trump era. But conversely, Strang helped me understand Trump. It helped me think through Trump,” Harvey says.

“Guys like (Strang) thrive in times of massive change when people want simple and hopeful answers to complex and depressing questions. He offered those things. A lot of his followers were the losers of the upheavals of the 19th century, people who had lost out economically, demographically. He told them they could be the people who ushered in the second coming of God. He offered a kind of new Jerusalem. It must have been really seductive.”

Harvey still isn’t sure whether Strang was a true believer of what he preached, especially because Strang had written extensively about his own atheism prior to joining the Church of Jesus Christ of Latter-Day Saints (LDS).

“We know a lot about Strang’s beliefs from before Mormonism. He was an atheist. He told a reporter he was an atheist when he walked into Nauvoo (a Mormon settlement). He was well-versed in the Bible … so he could talk a good game and if I was a believer at that time, with his King James-style writing ‘thee’ and ‘thou’ it would have taken me in.”

And, while Miles Harvey is not a Mormon, he is not about to dismiss anyone’s faith.

“I don’t question anyone’s faith because I have it myself. I don’t want anyone telling me I’m silly so I’m not going to tell anyone else they’re silly,” Harvey says.

But The King of Confidence is not about LDS faith or even LDS history.

“I was much less interested in Strang as part of Mormon history as such as a part of American history.”

And he was fascinated by the era’s “confidence men.”

Harvey’s research took him deep into old newspapers, genealogy and collections, including an impressive one at Central Michigan University.

“Strang and his people were savers, probably because they thought they were ushering in the Second Coming,” Harvey says. “There are two great archives, one at Yale because his first biographer, Milo Quaife, gave his papers to Yale. CMU also has a great collection. Another thing is the 19th-century newspaper databases. I was able to discover some stuff about Strang sitting in my underwear in my basement at 1 a.m. Some of the stuff was counterintuitive. If you were only looking in only Michigan newspapers, you would have missed stuff.”

Harvey only made one trip to Beaver Island when he was researching The King of Confidence. He said Strang’s legacy can be seen widely in place names, including the island’s village, St. James, and the main road, King’s Highway.

He also fell in love with The Book of Mormon, the sacred text of the LDS church. “It’s an amazing literary document,” he says. “I’m an English teacher, so that’s where I’m coming from. To reimagine the Bible as an ongoing story and set it in North America takes some imagination.”

Guest host for “An Evening with Miles Harvey” is Jeremiah Chamberlin, a University of Michigan instructor, contributing editor at Poets and Writers and editor-in-chief of Fiction Writers Review.