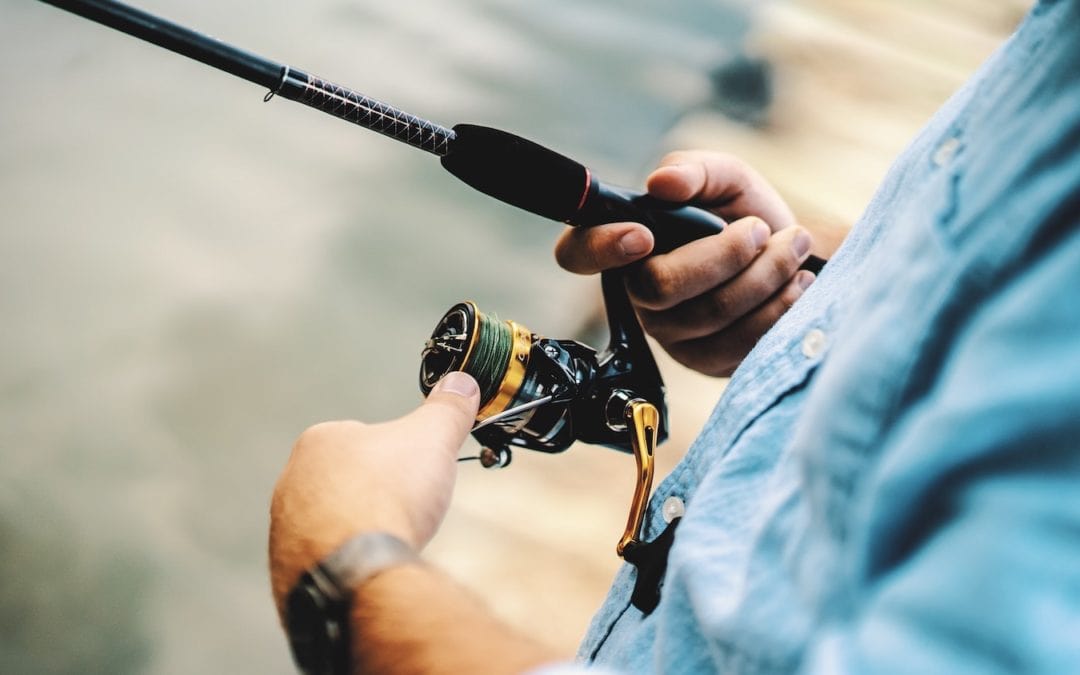 With extremely hot weather this week and next, Northern Michigan anglers may witness a fish kill, which can occur naturally in lakes and streams during periods of hot weather. It is not unusual to see dead or dying fish when this happens. High temperatures and low dissolved oxygen levels combined cause stress on fish. Most prone to summer kills are pike, perch, suckers, bass and bluegill living in shallow, productive lakes or bays with excessive amounts of algae or rooted aquatic vegetation. The plants consume large amounts of oxygen at night, causing a temporary shortage just before dawn. A cloudy, calm day extends the critical period by reducing reoxygenation from photosynthesis and wave action. Fish in oxygen-depleted areas do not sense the danger and therefore do not swim to deeper water.

Remember, all anglers 17 years of age and older are required to have a fishing license. Buy your license here.

If you’re headed out fishing, please do your part to keep yourself and others safe by following COVID-19 public health and safety guidelines. Go fishing only if you’re feeling well. Practice proper social distancing, staying at least 6 feet away from people who don’t live in your household. Frequently wash your hands with soap and warm water, or use hand sanitizer.

Cheboygan River: Anglers have caught smallmouth bass, catfish, freshwater drum, rock bass, carp and walleye when bottom-bouncing worms. The catfish action picked up with many between 8-12 pounds. Anglers have also been catching 20- to 30-inch pike casting spinners along the shoreline at the mouth.

Rogers City: Water temperatures warmed into the 50s, and the fish were scattered. Smaller lake trout were caught in good numbers. The larger fish were suspended a bit deeper or moving out to cold water in 60 to 120 feet. Run lines near the bottom or suspend dodgers and cowbells with spin-glo’s and spoons. Steelhead were caught in the top 20 feet with smaller orange and green or orange and silver spoons. Atlantic salmon may also be caught. Some are starting to get the occasional Chinook, coho or pink salmon throughout the water column in 90 to 150 feet with green, blue, black and white, or glow spoons at first or last light.

Presque Isle: Had good lake trout fishing, but anglers are having to move out deeper to get bigger fish. They also caught the occasional Atlantic, coho, pink or Chinook salmon throughout the water columns in 65 to 150 feet. Lead core up high with regular or smaller spoons was good for Atlantics and steelhead. Hot colors were green, blue, orange and green, orange and silver, black and white, or glow.

Alpena: Lake trout, steelhead, pink salmon and the occasional coho were caught trolling spoons and spin-glo’s in 70 to 120 feet off Thunder Bay Island and the Nordmeer Wreck. Steelhead and pink salmon were found in the top 35 feet of water while feeding on insects. Hot colors were orange, copper, blue and yellow. A few walleyes were found in 15 to 30 feet when trolling a harness or crankbait in the morning or evening in front of the harbor, off the north shore and North Point. Freshwater drum and pike were also caught.

Thunder Bay River: Fishing was slow, but anglers caught a few smallmouth bass and walleye when trolling or casting crankbaits in the morning and evening. Freshwater drum, rock bass and channel cats were caught when drifting or jigging crawlers.

Oscoda: Lake trout, steelhead, coho, Atlantic and pink salmon were caught when trolling spoons in 70 to 100 feet or out at the “Humps” in 150 to 180 feet. Hot colors were green, orange, copper, red and purple. Lake trout were taken on dodgers with spin-glo’s. Pier anglers caught channel cats, smallmouth bass and freshwater drum on crawlers and minnows.

Higgins Lake: Lake trout anglers are getting fish when trolling with downriggers or jigging in 100 to 110 feet. Perch have been caught in 40 feet around the islands, but anglers are sorting out the small ones. Pike were caught when trolling. The rock bass and smallmouth bass action was good.

Houghton Lake: Fishing has been slow, but a few walleyes were taken along the drop-offs in 14 feet with a crawler harness and leeches. Bluegills were found deeper along the edge of the weed beds in 8 feet. Bass also have been caught.

Tawas: Had good walleye, steelhead and Atlantic salmon fishing between Tawas Point and Alabaster in 50 to 70 feet with crawlers, body baits and spoons.

Tawas River: Not much was going on at Gateway Park other than a few smallmouth bass taken on various lures or crawlers.

Au Gres: Walleye fishing was spotty; however, a few limit catches were taken in 35 to 45 feet out near the Gravelly Shoals and south toward the Saganing Bar when using crawlers. The access road to the Pine River was flooded with some serious damage to the road, including deep holes.

Rifle River: Brown trout and rainbow trout were caught in the early morning.

Harbor Springs: Lake trout were caught around Harbor Point and north up to Good Hart. Anglers are targeting smallmouth bass along the shoreline in Harbor Springs when casting soft plastics. Bass were reported both on and off the beds, with some found along the drop-offs.

Petoskey: Catch rates were low for boats fishing on the Petoskey side. A couple lake trout were caught between Bay Harbor and 9-Mile (toward Charlevoix) in 75 to 100 feet. The Bear River had higher water levels. One angler did hook a couple of small rainbow trout at the dam. Those fishing the mouth of the river caught smallmouth bass, rock bass, suckers, catfish, bullhead and a couple small perch or bluegills on worms, minnows and crankbaits.

Charlevoix: Lake trout were caught both trolling and jigging near the bottom around North Point in 75 to 120 feet and when jigging near the cement plant in 100 feet or so.  Cisco were still in the channel, but in lower numbers. A few were caught in the early morning by those using Swedish pimples, kastmasters and spoons. Large freshwater drum, a few smallmouth bass and the odd walleye also were caught in the morning using artificial lures, crawlers and leeches. A good number of alewives moved into the channel over the weekend and were caught on spoons.

Lake Leelanau: Was producing some walleye south of the narrows.

Frankfort: Those fishing straight out and to the north caught good numbers of lake trout 60 to 90 feet down in 100 to 160 feet. A temperature break was reported 65 to 75 feet down. Chinook were caught on meat rigs in the early morning and at dusk.

Onekama: Boats heading out to the “Barrel” and off the golf course caught lake trout in 70 to 90 feet, but the Chinook numbers were low.

Portage Lake: A mayfly hatch means slower catch rates. The warm weather has pushed the bass, perch and other panfish into deeper water.

Lakes Cadillac and Mitchell: The bite will slow with the hot weather. Topwater bass fishing should be decent.

Manistee River: The hex hatch should be going full bore on the upper river. Water levels were very fishable.

Hamlin Lake: Had fair to good pike fishing. Panfish were in deeper water.

Ludington: Lake trout were caught 60 to 80 feet down in 70 to 150 feet off Big Sable Point. A couple Chinook were caught between the harbor and Big Sable Point in 100 to 200 feet. Steelhead were found in 140 to 300 feet. Most were using spoons and spin-glo’s or a flasher/fly combo. Meat rigs were hit or miss.

Lake Mecosta: Bass fishing was fair, but the bluegill and perch fishing slowed.

Chippewa Lake: Had decent bass fishing in the early morning.

Keweenaw Bay: Those targeting salmon and lake trout had some success, though most of the fish caught were lake trout. The action off Baraga was slow, but anglers are marking fish. Lake trout have been caught out of Traverse Bay and Huron Bay, but no limit catches were reported.

Marquette: Those targeting lake trout have done well near Granite Island, the Pinnacles and toward the Clay Banks. Coho and a few brown trout also have been caught. Those fishing near Shot Point marked fish but had no luck. Catch rates were moderate near Stannard Rock with smaller lake trout caught.

Little Bay de Noc: Walleye fishing was still a bit slow because of all the baitfish and fly hatches. Most fished near the mouth of the Whitefish River when trolling crawlers or stick baits in 22 feet and the mouth of the Escanaba River in 20 feet. Many were small, but some caught fish up to 20 inches. Smallmouth bass were caught near U.S. 2 in the Gladstone Bay area and the east bank area off the Days River when casting plastics in 4 to 10 feet. Perch anglers reported some good catches at Kipling using crawlers or minnows along the edge of the reefs in 28 feet. Bass were caught in the Ford River.

Manistique: Salmon anglers reported few catches with baitfish in the area. Best fishing was for lake trout 60 feet down in 100 feet and steelhead just outside the pier. Good smallmouth action in the river when casting plastics or crawlers.

Manistique Lake: Walleye, pike and bass have been caught in both lakes.

Munising: Had little fishing activity. A couple boats trolling the bay and West Channel for lake trout caught very few. Try trolling the drop-off near Grand Island, the White Rocks or the Wood Island Reef area. For Chinook or coho, try the West Channel.  Those fishing off the Anna River dock reported no catches.

St. Marys River: Good catches of walleye were noted in Carlton Creek, which is just south of the Raber boat launch. Use a crawler harness with a bottom bouncer in 8 to 12 feet near the mouth. Fish also were caught near Round Island, which is on the north end of Lime Island. Target the weed beds in 8 to 12 feet with shiner minnows under a slip bobber.

Detour: Salmon and trout fishing improved, as it appears more Atlantic salmon have moved into the mouth of the river from Lake Huron. A few Chinook, coho and steelhead also were caught when trolling from the lighthouse east. Fish the underwater hump halfway between the lighthouse and the first red buoy on the Drummond Island side.  The hump rises from 70 to 90 feet and seems to hold baitfish for salmon. Fish throughout the water column with lead core and orange and gold spoons with black ladder backs 15 to 60 feet down. A few Chinook were taken on purple and black spoons 55 feet down in 80 to 100 feet.

Cedarville and Hessel: A fly hatch is underway. There were no reports of yellow perch caught in Cedarville Bay. The new parking lot is open for anglers to park vehicles and boat trailers. Anglers are starting to take a few cisco in McKay Bay on a teardrop tipped with a wax worm two to three cranks off the bottom in 12 to 14 feet. Jigging usually works best, and anglers can try 4 to 5 feet down. For Atlantic salmon, try just west of the Cedarville Stone Quarry, at Boot Island and Coryell Island when trolling small squid or fly-type baits in 25 to 40 feet. Young anglers will want to try shore fishing off Hill Island Road, where two fishing platforms offer easy access to Flower Bay. For Hessel, large schools of yellow perch were moving into the Hessel Marina.

St. Ignace: Had no reports, as water temperatures in the straits were 58 degrees at the surface and 55 degrees about 60 feet down. Walleye fishing slowed in the Pine River, but those drifting a crawler harness with leeches at the rapids caught fish. On the Carp River, pier anglers caught a couple walleye when bottom-bouncing with leeches.