Meet the Tin Can Tourists 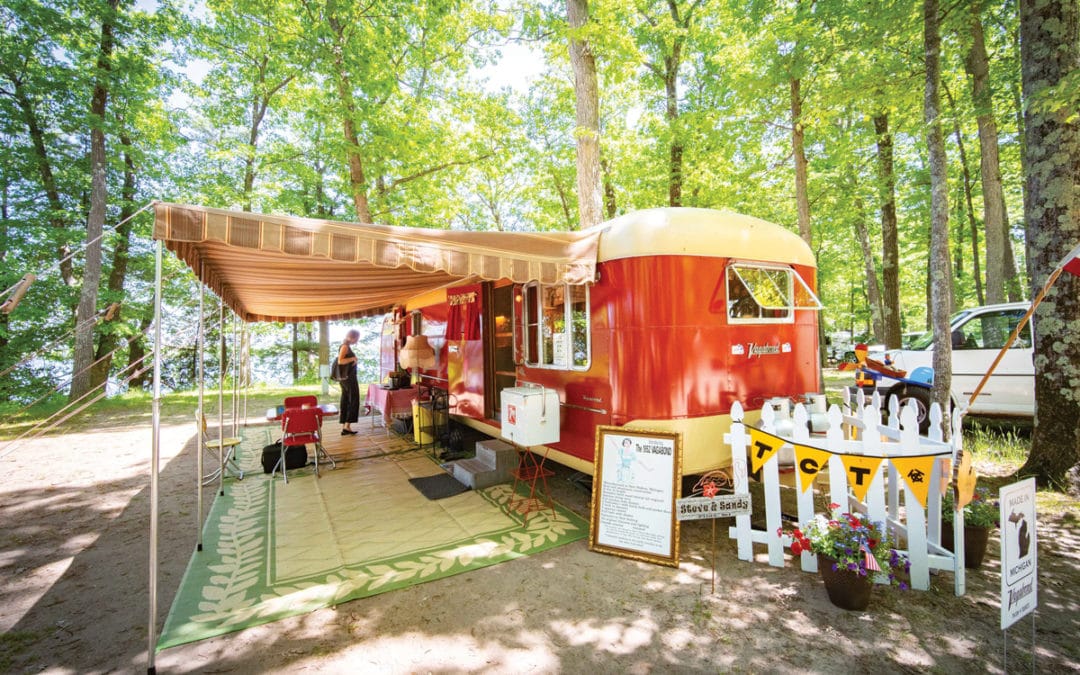 The Tin Can Tourists and their vintage metal campers converge at Interlochen State Park for a weekend of camaraderie.

“Camper is the umbrella term,” explains Forrest T. Bone. He gestures to the fleet of trailers in the woods behind him. Forrest is the “Royal Exalted Tin Can Opener of the Tin Can Tourists.” And, in case you’re wondering, yes—Forrest T. Bone is his actual name. (The business card he hands me lists him as the “Royal Chief.”)

The Tin Can Tourists describe themselves as “an organization committed to the celebration of classic trailers and motor coaches through annual gatherings of owners and friends,” and they have a long and playful history of doing just that. The original Tourists founded the organization in DeSoto, Florida, in 1919. Each season, the Tourists traveled across the United States together searching for fellowship and new adventures. They held reunions in a variety of locations, but most frequently returned to Traverse City.

“Back then, it was all Model T’s and canvas,” Forrest says. Over the next few decades, the group grew rapidly. “By 1935, they claimed 100,000 members,” he says. The Tin Can Tourists stayed intact until the group experienced a 20-year hiatus from the late ‘70s until 1998, when Forrest and his wife, Jerri, revived the organization with a trip to Camp Dearborn in Milford, Michigan. 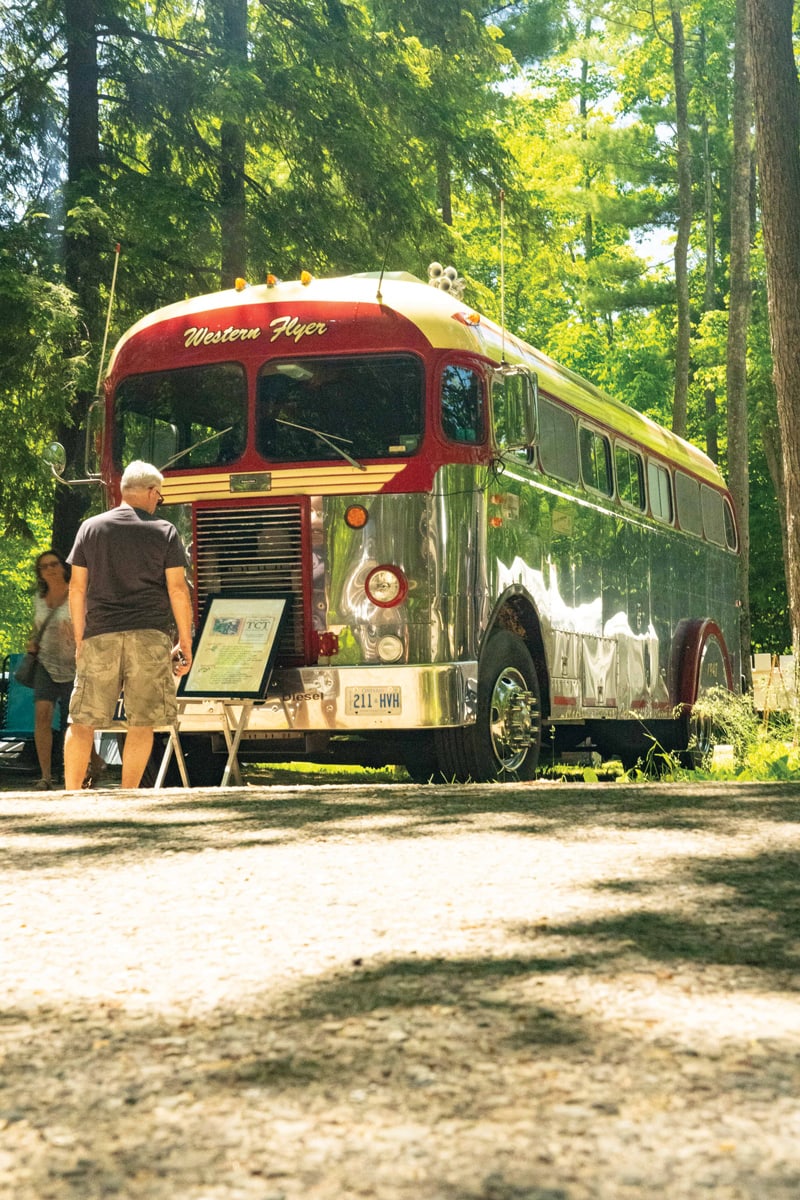 Just like the original group in the ‘20s and ‘30s, it’s still tradition to meet every summer in Traverse City. At last year’s centennial celebration on June 22, we went behind the scenes at Interlochen State Park to see the inner workings of the club (and more than one vintage camper). Coincidentally, 2019 was also the centennial of Michigan State Parks, so there were plenty of locals and curious travelers staying at the park who had the opportunity to experience what the Tourists are all about.

Like most of Northern Michigan, the woods of the park are thick with the tangy scent of pine. Kids run around in swimsuits, and there’s a sign down by the lake warning swimmers to “towel off completely,” lest they fall victim to the scourge that is swimmer’s itch. (If you know, you know.) The site rests just south of Traverse City between Green Lake and Duck Lake, directly across the road from Interlochen Center for the Arts.

As I walk down toward the lake and through the woods, a band of vintage campers comes into view. I expect to see a few fixed-up aluminum Airstreams akin to those flooding my Instagram feed. But, no. The owners of each vehicle fastidiously painted and decorated their trusty steeds: turquoise, red, blue, yellow and white. Some are wood. Some metal. Some come attached to vintage cars like a huge, blue Studebaker. These vehicles are nothing like the fixer-uppers I’d been seeing; they are in a different class entirely—pieces of American cultural and manufacturing history. 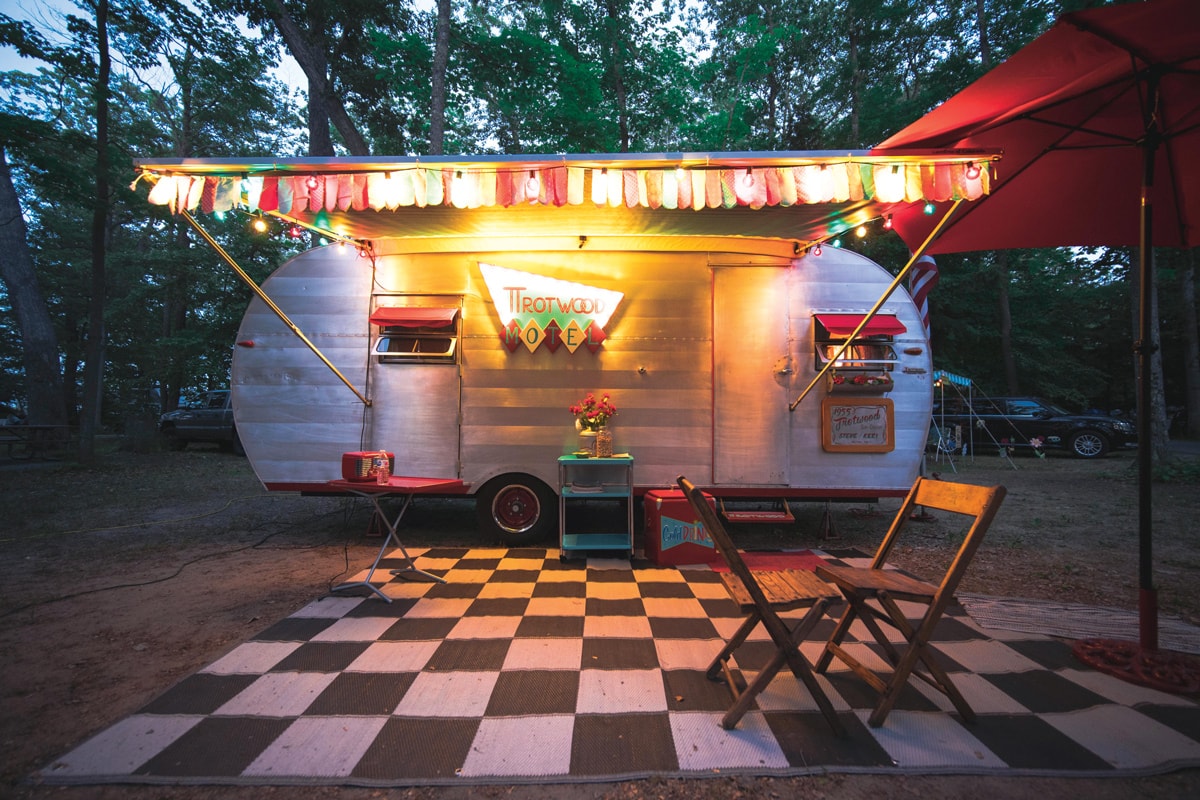 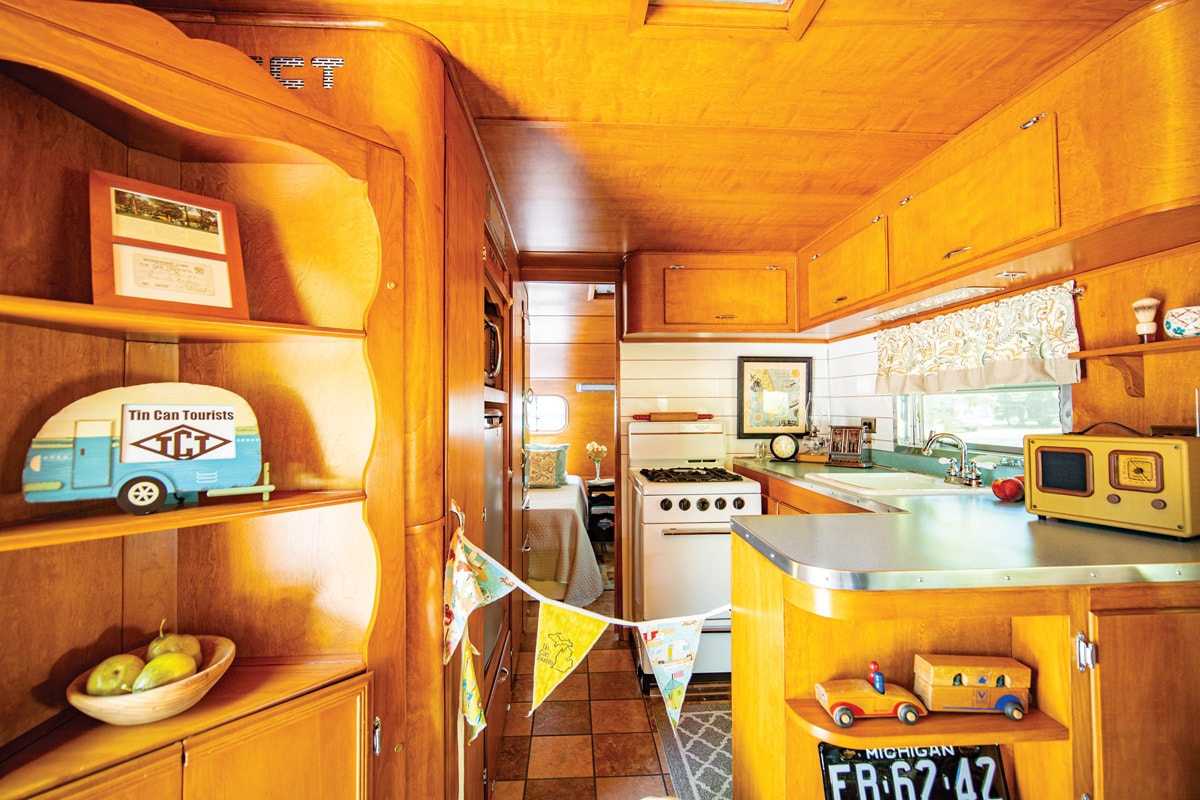 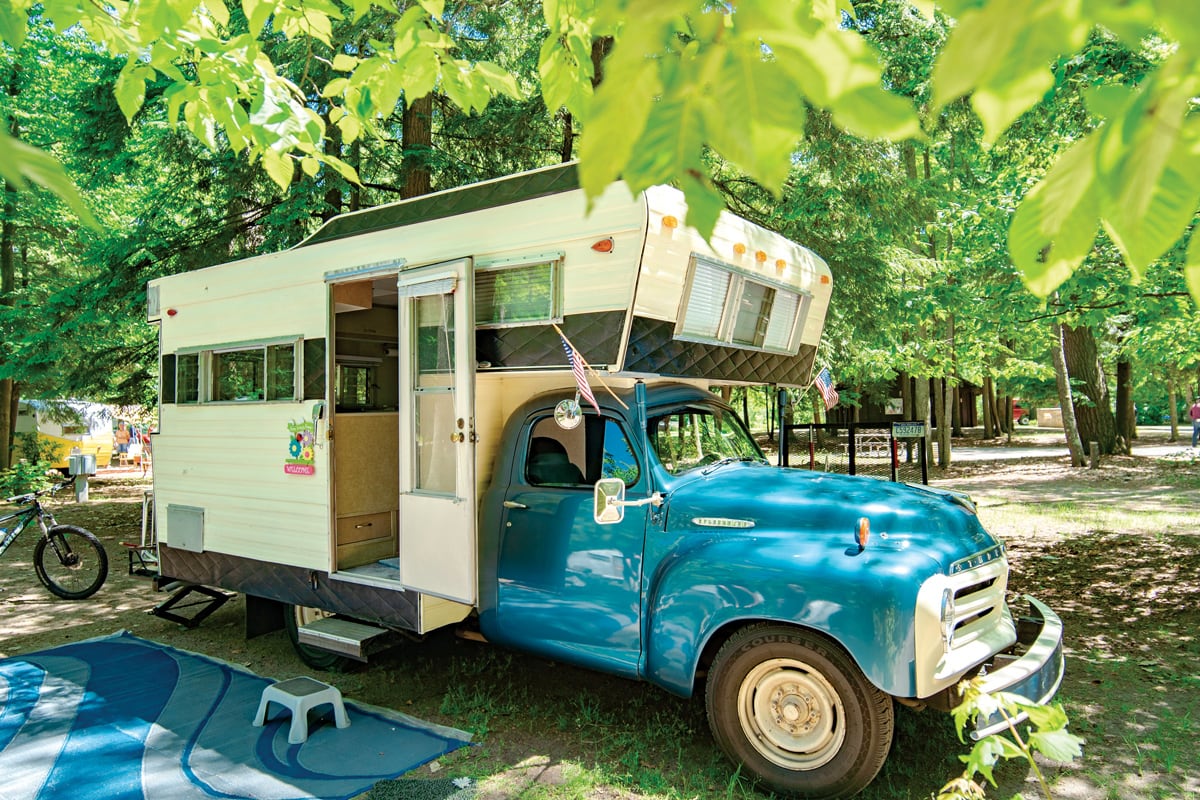 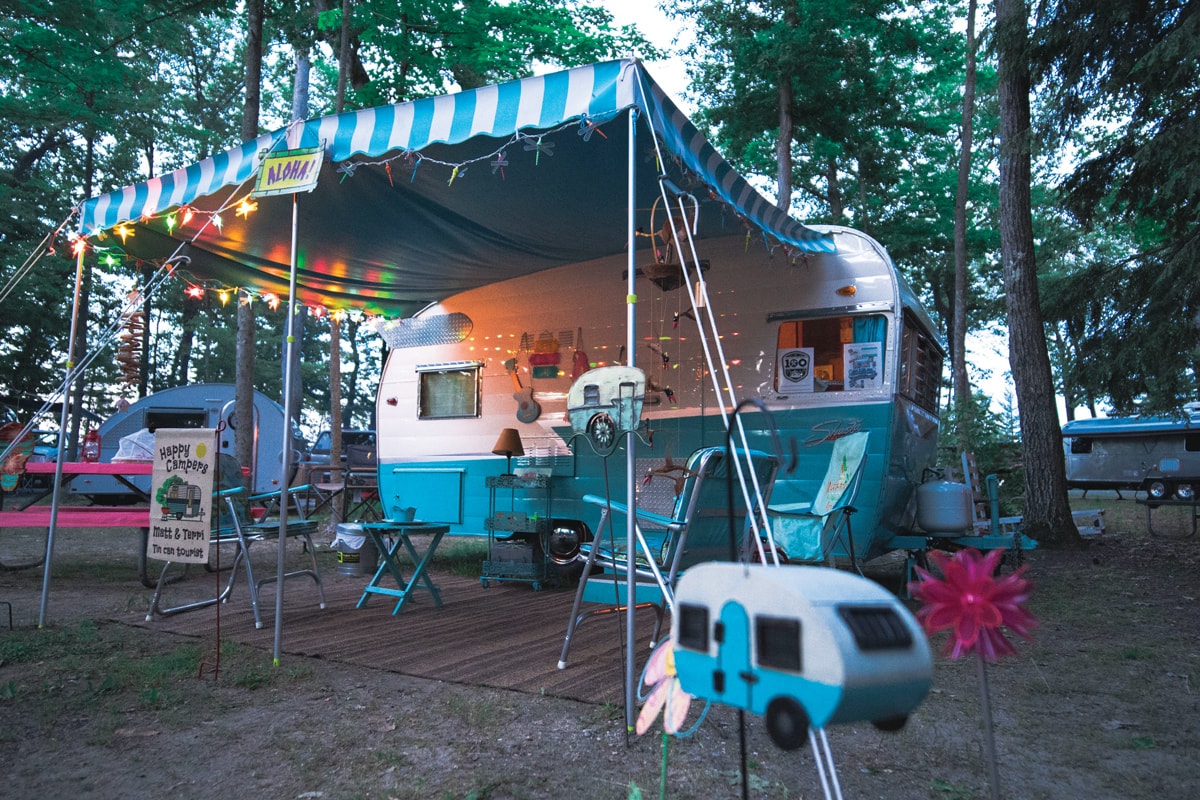 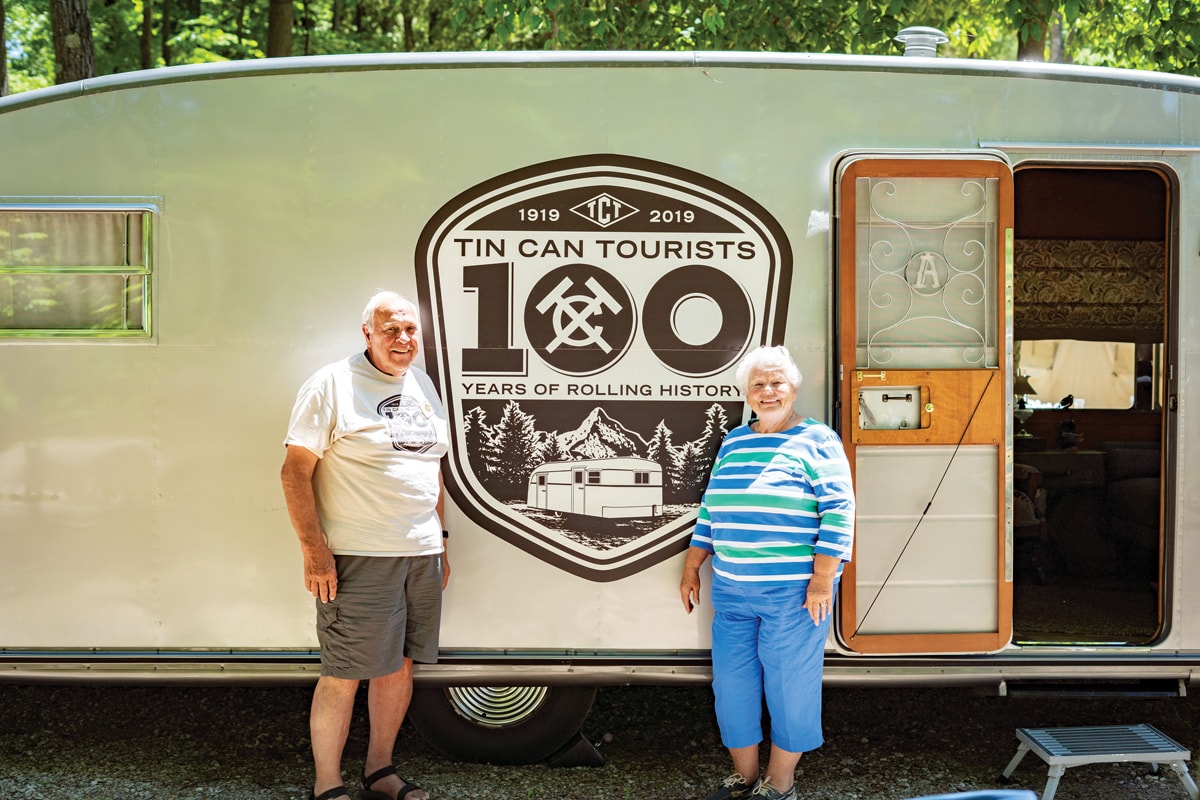 Forrest and Jerri sit on lawn chairs in front of their camper: a silver 1949 Spartanette with the black and white Tin Can Tourists logo splashed on its side. They’ve owned it for a total of 12 years over two different ownership stints.

The Spartan Aircraft Company began experimenting with campers in 1945. Initially, they made—you guessed it—aircraft. After World War II, the company beefed up business by manufacturing campers for a population that increasingly needed housing and a cheaper way to travel. The Spartanette became the “Cadillac of trailers.” Spartan painstakingly designed and manufactured each detail in an era that never knew the word “outsource.” Case in point, the birchwood interior of the Spartanette was actually created on site at Spartan’s woodworking shop.

Inside, Forrest and Jerri keep detailed binders and albums packed with Tin Can Tourist history. Vintage touches are everywhere. Upholstered curtains line the windows and an old-fashioned oil lamp sits on the table below. It’s a nod to comfort in an era of making do. 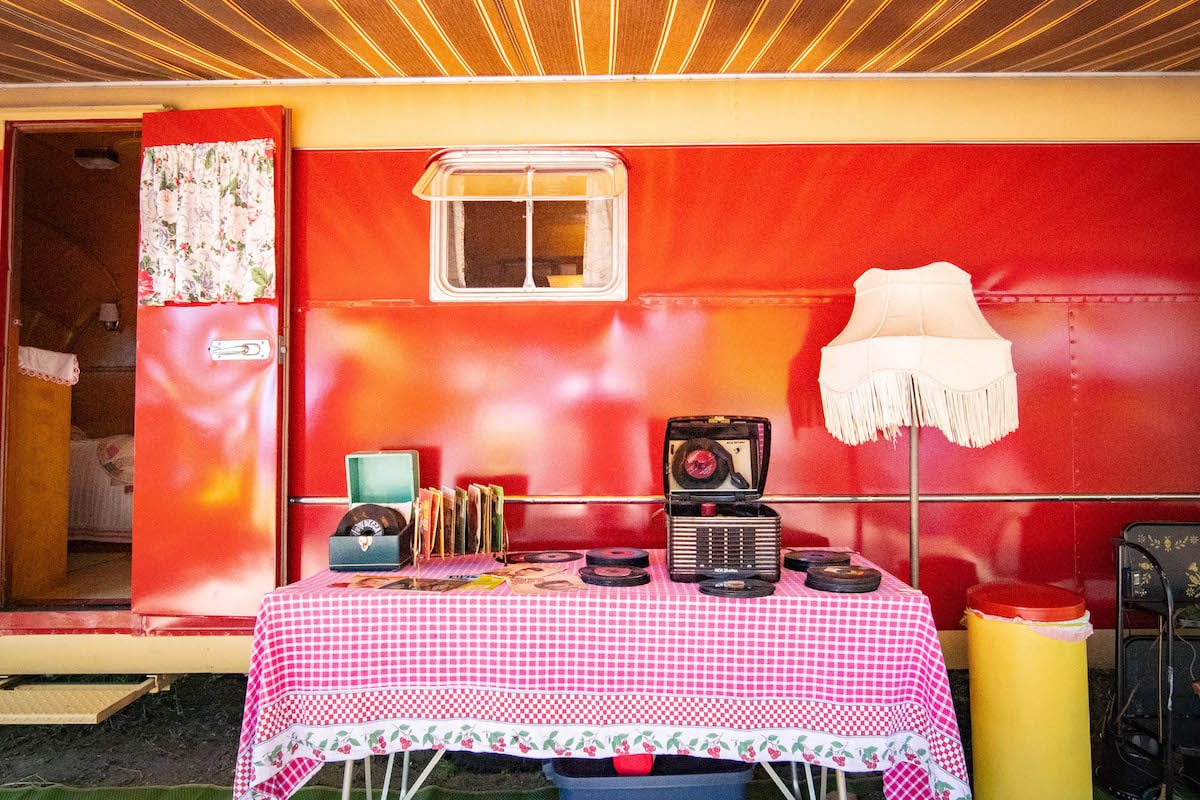 How does one get into vintage trailer aficionado-hood? Well, for Sandy Mastin and Steve Brown, it started with a desire for comfort. “We were tent camping and wanted to get off the ground!” Sandy says. They bought a camper that happened to be vintage. That first camper, a 1964 Phoenix, became a happy coincidence. After that, they were hooked. I ask Sandy how long she’s been a member of the Tin Can Tourists and she fiddles with the lanyard around her neck to check her nametag. “Eleven years!” she laughs.

The decorated area surrounding their campsite coordinates with the classic interior. They have a picnic shelter comprised of a broad awning over an outdoor rug, and a portable record player sits on a table spinning jazzy big band music beside a fringed standing-lamp.

The indoor touches of the Vagabond are even more detailed than the exterior. Vintage travel magazines sit in a wall-mounted magazine holder. All the decorative linens— the curtains, the potholders over the tiny stove—are done in red and white. They coordinate with the antique blender on the counter that used to belong to Steve’s mother. Everything is vintage. In a perfect example of early ‘50s efficiency, there’s even an old-fashioned Brillo box on the counter next to the sink. 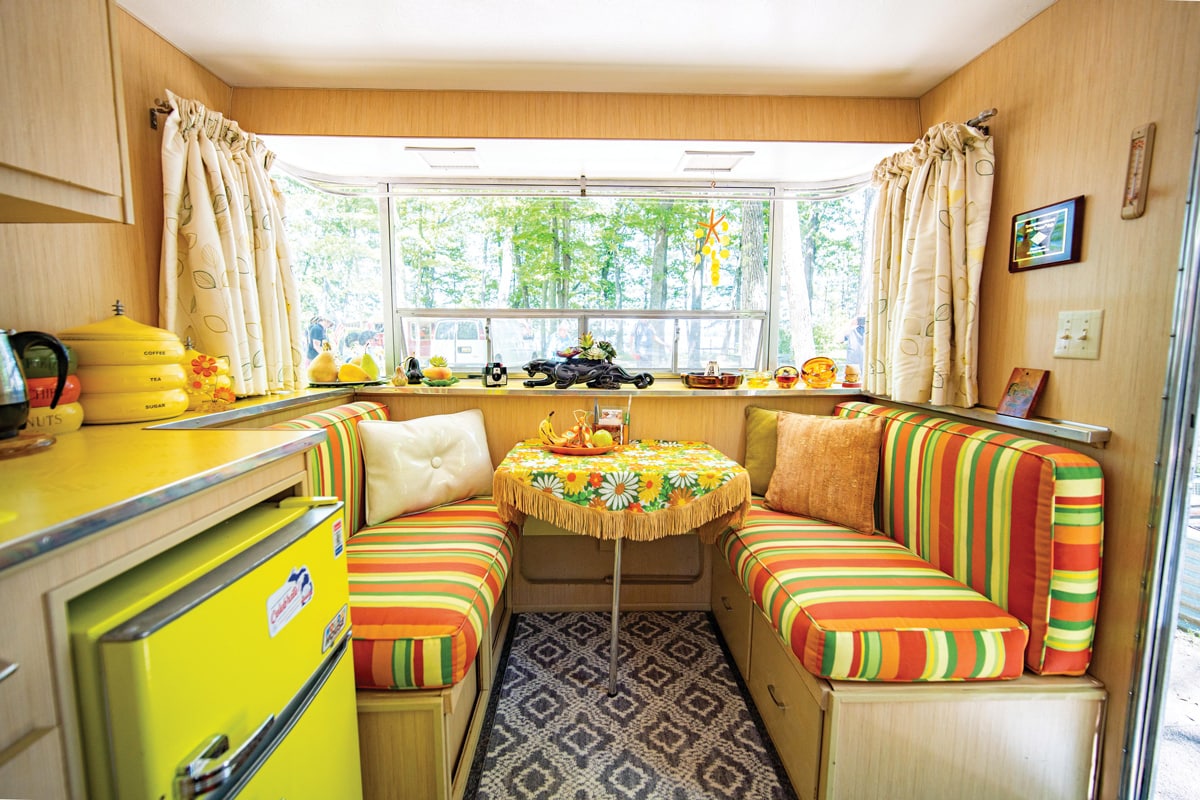 Both Forrest and Sandy insist I go see the “Holiday House.” Sandy goes so far as to call it the “holy grail of trailers.” After walking the campground a couple of times, I finally find it.

“I like the vintage stuff,” says Dawn Bastian. Dawn’s 1962 Holiday House is a relic. It should remind you of your mom’s house. Or your grandma’s house … but not the chocolate chip cookie kind of grandma. Every detail is accounted for, from the plastic-covered lime green houndstooth sofa to the party-store cigarettes in the ashtray. The sink and mini refrigerator are both a violent shade of yellow.

The selling point of the Holiday House was the giant window in the back. It stretches around a breakfast-nook-like eating area. Dawn’s is upholstered in orange, green and yellow stripes. Families in the ‘60s could sit and eat their meals while enjoying the view—all while indoors.

“It’s unique,” Dawn says. “You get to tell a story.” In fact, the Holiday House was initially created and manufactured by David Holmes of Harry & David fame. Production began in 1959 at a plant in Medford, Oregon. Unfortunately, a fire destroyed the factory only three years later. As a result, there are very few Holiday House campers in circulation.

Dawn’s been a member of the Tin Can Tourists for about 13 years. “For me, I’m single and it’s a great way to travel,” she says. “I’ve met some great people and made some lifelong friends.” 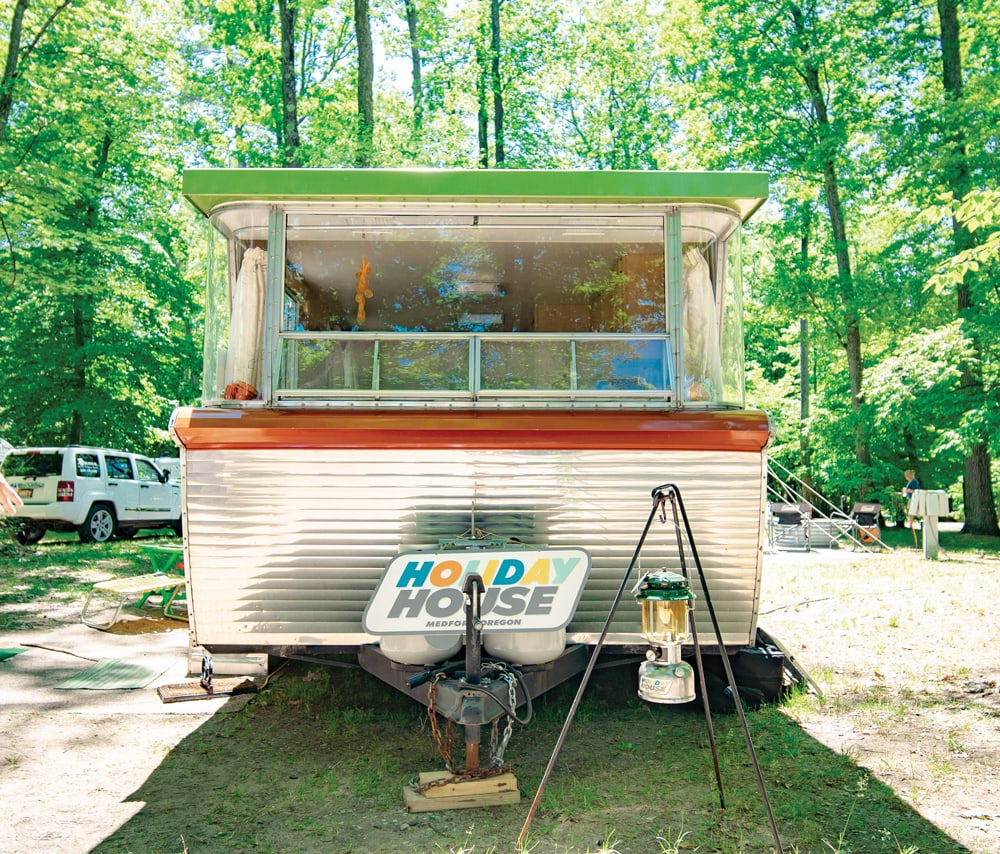 As of 2019, there were about 2,400 campers registered with the Tin Can Tourists; however, that number only accounts for the vehicles themselves and not for overall membership. More often than not, multiple people travel with one trailer, and many members own more than one camper.

Tin Can Tourists is, at its core, a mission of fellowship and a way to look back at some of the most charming aspects of American history. Before sending me on my way, Forrest taught me the official secret handshake, sign and password of the Tin Can Tourists. (To the members: Don’t worry, I can assure you I’ve forgotten them.) In the 1930s, the Tourists also selected an official song, which still acts as such today:

Molly Korroch is a journalist based in Suttons Bay. Visit her website at mollyhunterkorroch.com or follow her @mollykorroch // Grant Piering is a Traverse City-based adventure-lifestyle photographer and videographer showcasing organic experiences and memories. grantpiering.com