The story of a historic Walloon Lake home with a cloistered kitchen, and the homeowners and their Northern Michigan kitchen remodel dream team who rescued it.

Like a vintage gem, the house designed around a series of octagons (think Monticello) had nestled onto a hill overlooking aquamarine-colored Walloon Lake since 1941. Bedecked in striped-red awnings, the home had been a landmark on the lake for decades when a 16-year-old girl boating by with a friend pointed it out and told her friend, “I’m going to live there someday.”

Flash forward some years later and the girl, now married, was boating with her husband and he pointed to the house and said: “That’s always been my favorite house. And it was once owned by one of my dad’s good friends who passed away years ago.”

No doubt, the young couple shared a sophisticated eye for architecture. As they were to learn, the home had been designed by Charles Noble who had made a prestigious name for himself designing Art Deco buildings in Detroit among them the once-grand Lee Plaza Hotel and the still hopping Elwood Grill.

By then, the home had been vacant for a number of years so the young couple decided to look into purchasing it. It turns out the family members who had inherited were hoping to find a buyer who would treasure it the way their family had. Done deal.

That was twenty-two years ago. “Everyone thought that we would tear it down,” the homeowner says. But, of course, that was out of the question. “It is a love affair house,” she adds. 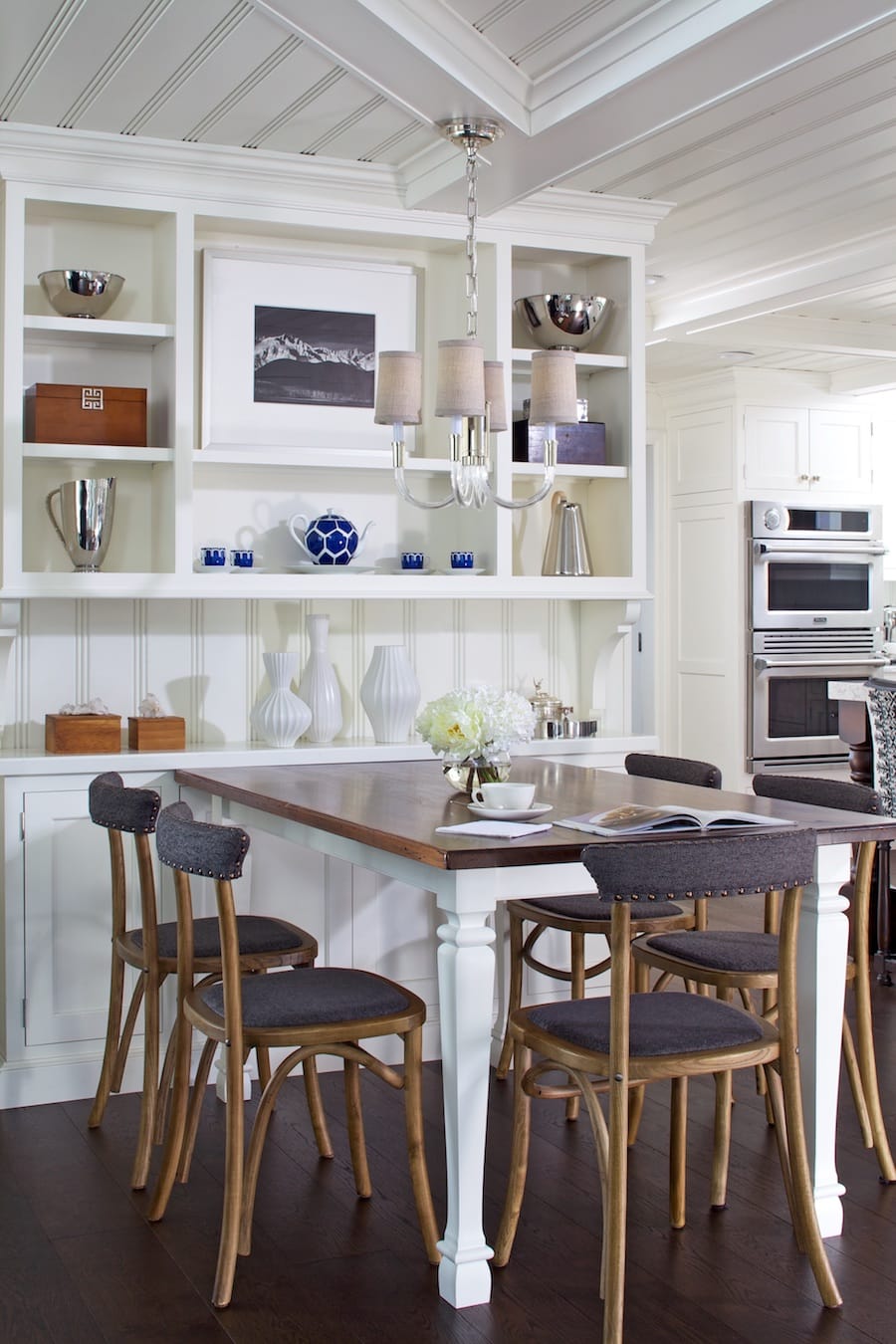 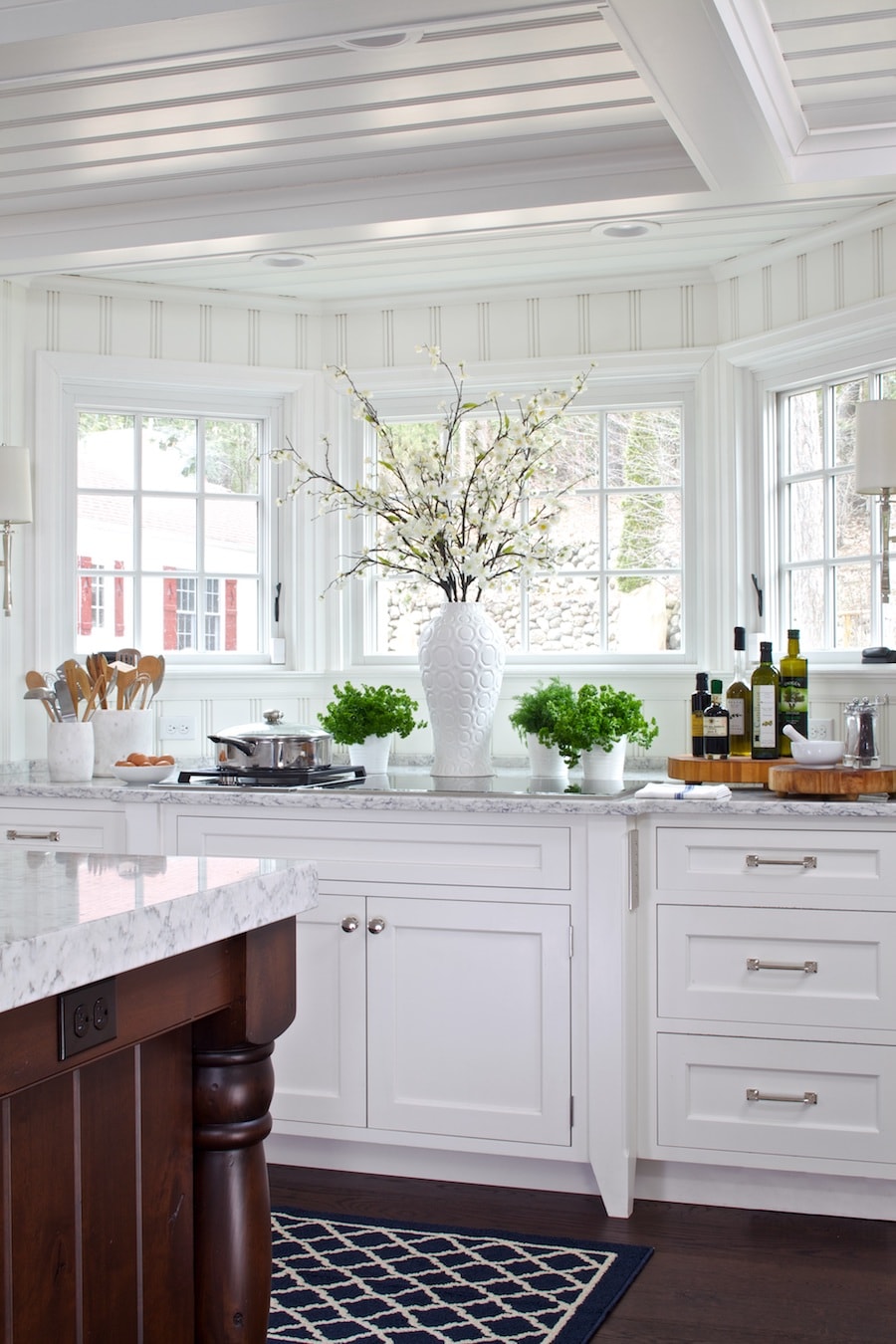 Over the years the couple chipped away at all the needed repairs—wiring, a new furnace, a roof—on the old home, while slowly renovating it to feed the needs of their growing family. They’d even attempted a kitchen updated some years back but, “it was a nightmare,” the homeowner recalls. “Things came in the wrong size and upside down …”

And so, the kitchen remained small and, for-the-most part, outdated (including a servant’s bell in an adjoining butler’s pantry that had become a bit of a family joke.) But worst of all, it had no lake view—a load-bearing wall cloistered it from the inspirational Walloon Lake view found through the family room windows and screened-in porch just on the other side. Previous contractors had told the couple the wall could never be removed because of the complicated ceiling system based around those octagonal shapes.

Enter Gary Nance Design, Birchwood Construction and Jill Brecheisen of Kitchens by Design. The couple had grown comfortable working with Birchwood’s talented crew on a number of renovations throughout the home. “They are fantastic to work with,” says the homeowner, noting their skill and professionalism. She particularly points out the way Birchwood has always honored their request for a crew that remains constant through the project, “so that we always know who is in our home,” she says.

Ken Provost, co-owner of Birchwood Construction, a custom home builder and remodeler, returns the compliments to the homeowner: “She really values having a project done right and will allow us to go the extra mile to make it happen,” he says. 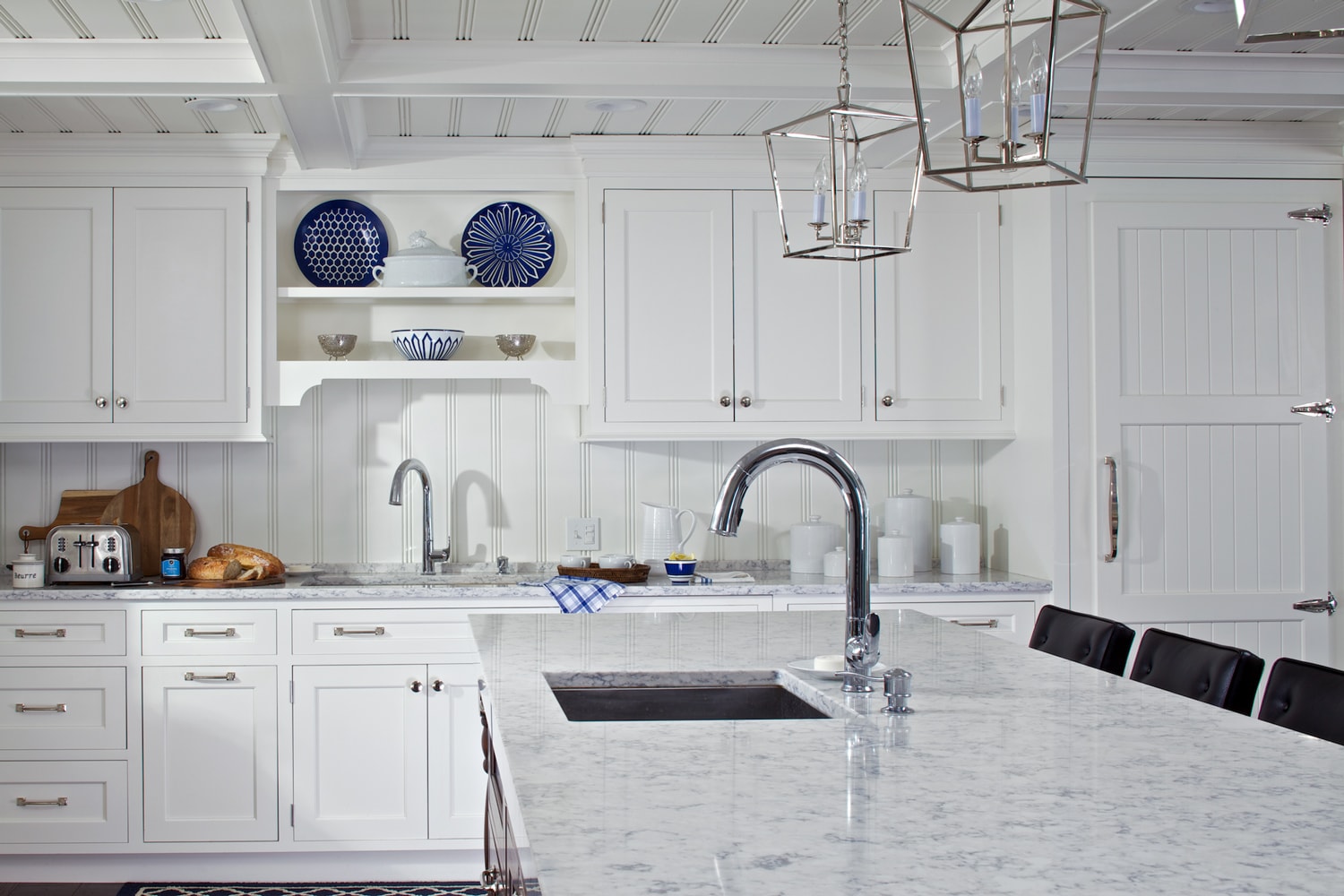 Longtime friends and fans of Gary Nance, the homeowners knew he’d find a way to make a dream kitchen a reality for them. And yes, count Nance as a fan of the house: “I’d been dying to get inside it since the first time I saw it from Walloon Lake,” he says.

The homeowner, who has a strong design background herself, brought Nance a sketch of what she thought might work: an archway in that view-blocking, load-bearing wall that would open up a view through the living area and its adjacent screened-in porch, which she hoped to glass in. Undaunted by the past contractors’ opinion that the wall couldn’t come out, Nance came back with his own plan—for glassing in the screened-in porch but completely removing that load-bearing wall to open up the kitchen to that expansive Walloon. “’No’ isn’t in my vocabulary,” he says.

“His plan blew my mind,” says the homeowner.

The plan, of course, would need to be executed by Birchwood Construction. But no problem there, says co-owner Ken Provost. “It took some head-scratching, but it really wasn’t anything we haven’t faced before. We do a lot of remodels that involve transferring weights and loads.”

And so, the great reno was on. The complicated roofline needed custom steel trusses and the removal of a brick furnace of some kind that had been covered over by the wall years ago. “We think it may have been coal-burning, added because of being built during the War as a second heating source if it became necessary,” the homeowner says.

In one poignant moment that brought home the deep history of the home with its Walloon setting, a workman removed a piece of board that had the inscription of a builder who had constructed a number of the venerable old cottages around the lake. It read: “Ben Ellis April 27, 1941, a very nice day.” 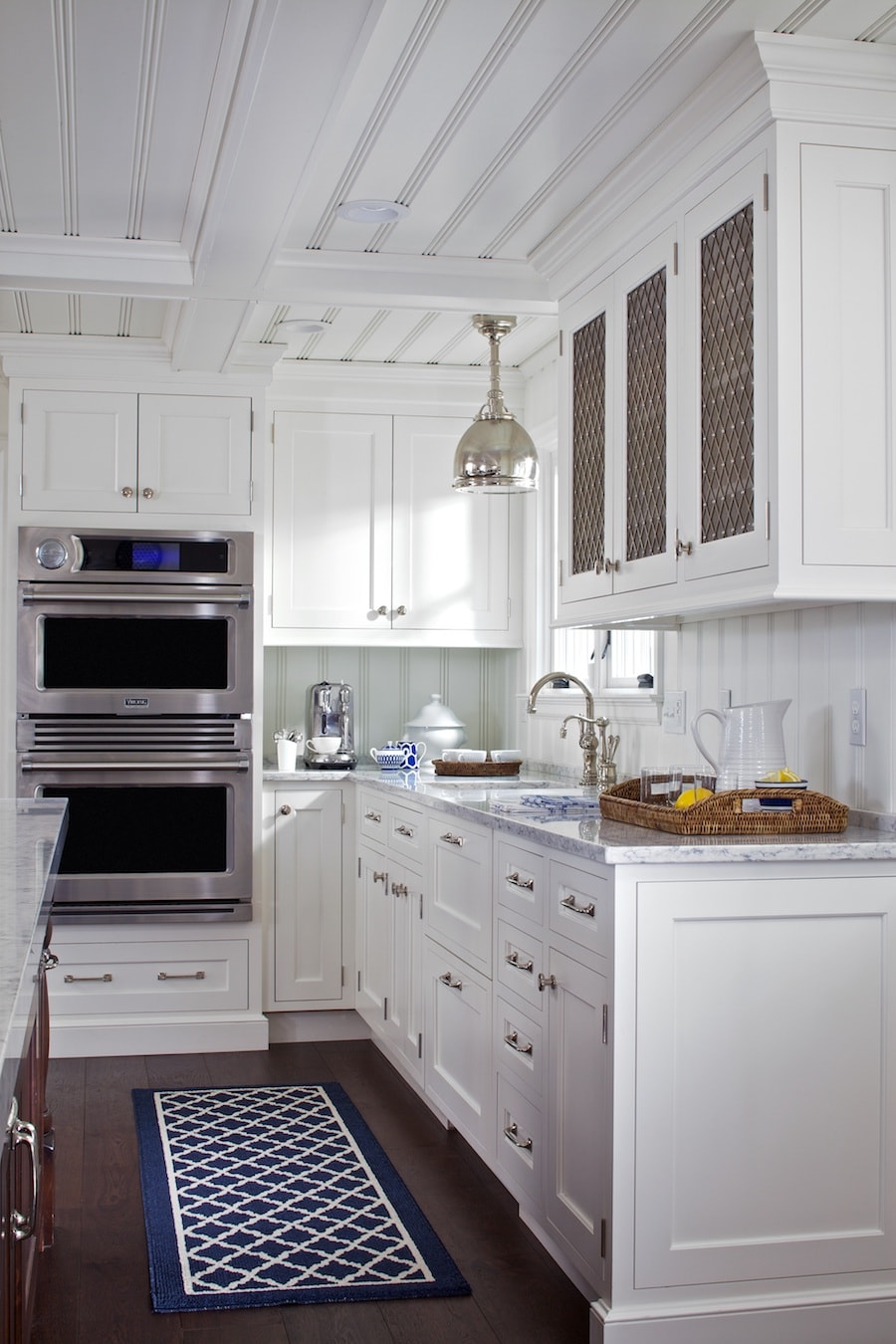 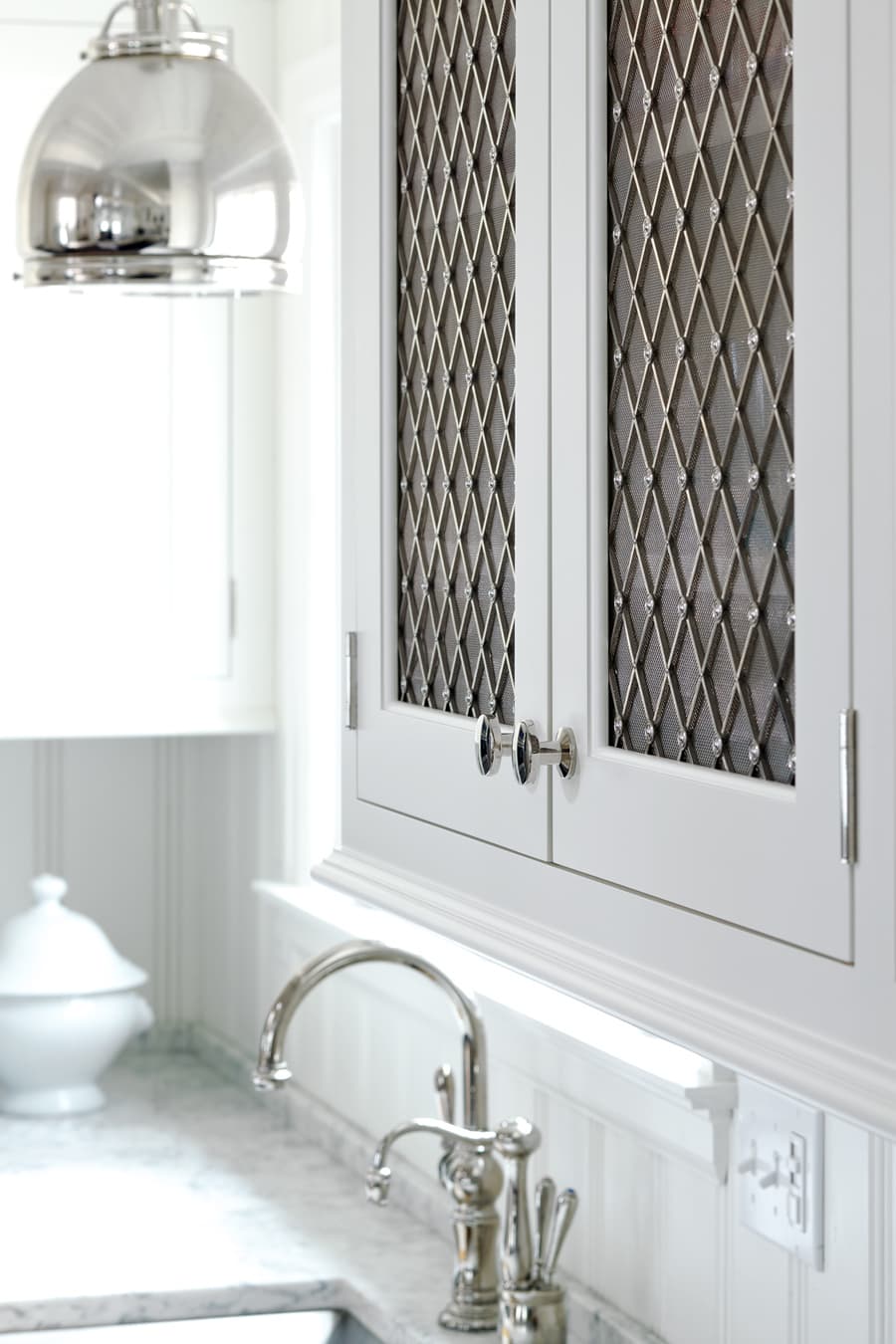 But by far the most dramatic moment was when the wall came down to reveal an expansive view of Walloon Lake.

With its new, wide-open space, the kitchen was an open book, waiting for great design. The homeowners, avid skiers, spend time each year in the French Alps. Those experiences have given the homeowner a passion for the French lifestyle. “It’s an art of living,” she says. “Everything is thought about. You don’t just serve a cup of coffee; you make it a small experience. There is always something beautiful to look at, to touch and to taste. A kitchen is not just about: Now we are going to feed you.”

Keeping those sentiments, the homeowner also wanted the room grounded in the airy, cottagey style that Walloon Lake homes are known for. Kitchen designer Jill Brecheisen helped translate the homeowner’s vision into the elements of this showpiece (though not showy) kitchen.

Brecheisen designed all of the cabinetry as well as the furniture-quality island base made from knotty alder with an Heirloom Finish. With its 2.5-inch deep marble-like quartz countertop and Euro-inspired bar stools backed with a Nordic fabric, the island is a fresh take on Old World style—one that is complemented by nickel-mesh grills in the upper cabinet fronts and polished nickel hinges and other hardware throughout.

The kitchen’s utilitarian features blend in effortlessly from the v-groove paneled refrigerator (with vintage icebox hinges) to the Wolf modular range (three induction burners and one gas burner) that snuggles into a windowed alcove and is vented with a pop-up vent. Viking TurboChef double ovens are wall-mounted nearby. A custom, hickory-topped table pulls out of one wall and does extensive duty as homework, snack and morning coffee table.

As it should be, the kitchen is now the center of the family’s life. “We are all in the kitchen, all the time,” says the homeowner, marveling at the fact that the family had lived 20 years in the home with the cramped, viewless kitchen. “Now there’s this expanse of Walloon Lake all around you … the light and the views, that’s why we live up here,” she says.