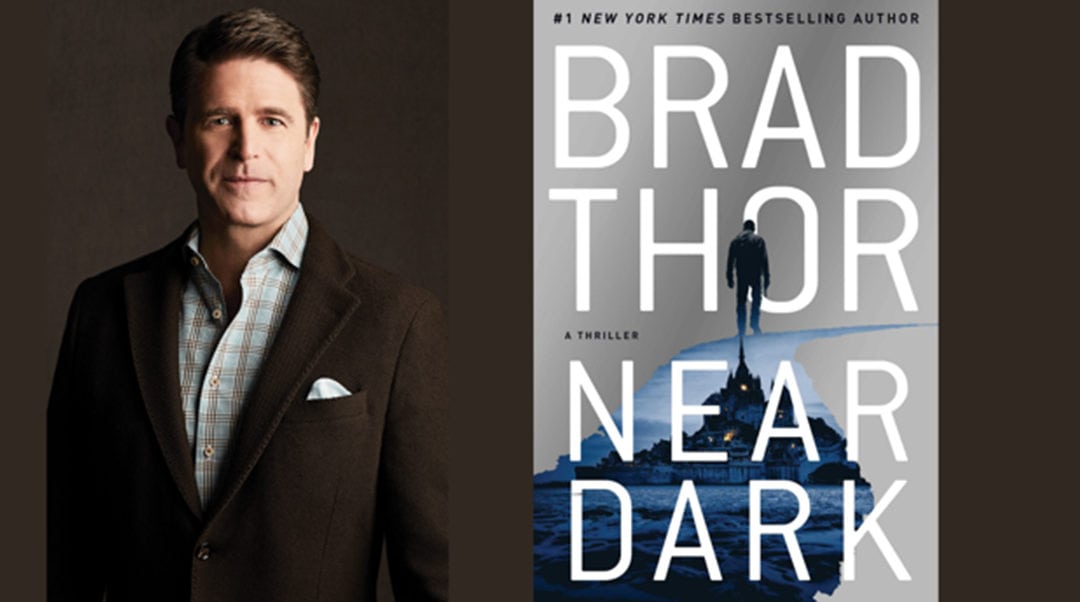 Brad Thor, author of 20 thrillers, will be at Traverse City’s National Writers Series (NWS) on Thursday, July 23, beginning at 7 p.m. to talk about his latest book, Near Dark. The book comes out July 21 and is available for preorder at Horizon Books with a 20 percent NWS discount. Guest host for the evening is Doug Stanton, #1 New York Times bestselling author and co-founder of NWS.

This is a free, virtual event. Register here.

Brad Thor sees the pandemic as a learning experience, especially in lockdown with his two high-school-age kids.

“I told my kids it’s like we’re on a starship, limited contact with other life forms and eventually we’ll find a planet where we can land,” he says from his home in Nashville.

“We want the pandemic to be a plus for our kids, how they cope.” He takes inspiration from Angela Duckworth’s book Grit, which includes stories about cadets at West Point who do, or don’t, make it through the first year. “The concept of grit is something we’re trying to draw attention to—overcome adversity to get what you want. Just keep getting up—that’s grit.”

There’s a passage in Thor’s latest thriller, Near Dark, when the lead character, Scot Harvath, a former secret service agent and Navy SEAL, gets thoughtful about this very thing:

We all have our crosses to bear … Our cross, we realize, helps define who we are. How we wrestled with our problems, how we battled the demons that often accompanied them, was what built character.

“If there’s anything you can take away from my character it’s to have a positive attitude,” Thor says of Harvath—and himself. “I’m looking on the bright side. More people are reading and we’re getting clever with workarounds. Even this (virtual) book tour—I can reach out to more people. One of the things I’m telling friends is, the Spanish Flu epidemic gave us the Roaring 20s. We’re going to be good.”

He admits, though, that it would be a tough time to be a spy. How do you hold a clandestine meeting that involves whispering? How do you do one of those slick handoffs when you can’t get close enough to hand anything off?

He did have one idea for how Scot Harvath might change his behaviors. “He’d use the butt of his Glock to pull on a door handle,” Thor laughs.

And, even though Thor has written about a pandemic before (Code of Conduct, 2015, the 14th of Thor’s 20 thrillers) he doesn’t plan to include anything COVID-related in future books. “I want to give people a break,” he says.

He even thinks about those breaks when he’s writing. Chapters end on a cliffhanger, so you have to keep going to find out what happens, but “you have to master the pacing,” he says. “You can’t have people breathless the whole time. It’s like a rollercoaster. Let them catch their breath.”

Thor has seized the extra time during his lockdown to write. He is working on another book featuring Scot Harvath, a former secret service agent and Navy SEAL, plus another “secret thriller project” on the side that’s not Scot Harvath. “I was judicious and wise with my time,” he says. He has published a book a year for the past 19 years—except once. In 2010, he published two books. Sounds like 2021 might be another twofer.

Near Dark is full of the spycraft that has made Thor a beloved thriller author—from noticing a tan line on a bad guy’s finger and wondering why he took his jewelry off, to technology hacks that bend the mind. He doesn’t make this stuff up, either.

“What I do is ‘faction,’ where you don’t know where the facts end and the fiction begins,” he says. He loves hearing about readers who keep their laptop open so they can look up the places, the weapons and the techniques he writes about. “I’m supposed to entertain you, but if you close the book and say, ‘Hey I learned a couple things,’ that’s great.”

And Thor himself learned something while writing Near Dark. One of the characters has dwarfism and “I wanted to juxtapose him with the biggest fiercest dog, so yeah, I Googled that.” Turns out they’re Caucasian Ovcharkas.