It was 1920 when these 13 state parks were established within portions of as many counties across the Lower Peninsula, including Cheboygan, Oceana, Ottawa, Alcona, Presque Isle, Otsego, Clare, Grand Traverse, Charlevoix, Wexford, Lenawee, Jackson and Washtenaw.

The previous year, Interlochen had become the first state park in Michigan established under the auspices of the Michigan State Parks Commission. And it wouldn’t be until 1922, with Brimley and Baraga, that the first mainland state parks would be created in the Upper Peninsula. A state park at Mackinac Island and Fort Michilimackinac had been created previously under another governance.

“With Michigan’s then-burgeoning population and Henry Ford’s development of affordable automobiles, it didn’t take long before motorists began looking for places to drive to for the enjoyment of leisure time and recreation,” says Ron Olson, chief of the Michigan Department of Natural Resources Parks and Recreation Division. “With places available to the public for this few and far between, the state parks commission was working hard to establish new parks.”

In many cases, lands were donated to the cause—some with parks already on them—or reverted to the state after taxes became delinquent. In still other instances, some tracts of land were purchased outright for park development.

In August 1920, The Times-Herald in Port Huron described the activities of the recently created state parks commission:

“There was appropriated the sum of $150,000 for the years 1920 and 1921. As a result of this action, the State of Michigan is rapidly acquiring a system of state parks which not only promise to be comparable in size and beauty and interest to those of any other state in the union, but will make Michigan more than ever the summer playground of the great middle west.”

By June 1921, 24 sites had been acquired and improvements began on 17 of them. To make these sites easily accessible to tourists, most new state parks were established either on or adjacent to state trunk highways.

“One hundred years later, we want to acknowledge the contributions these early state parks had in creating a lasting legacy for Michigan,” Olson says. “From Burt Lake to Grand Haven and Silver Lake, we’ve got a lot of reasons to commemorate this milestone.”

Read on for a closer look at each of the 13 state parks established in 1920. 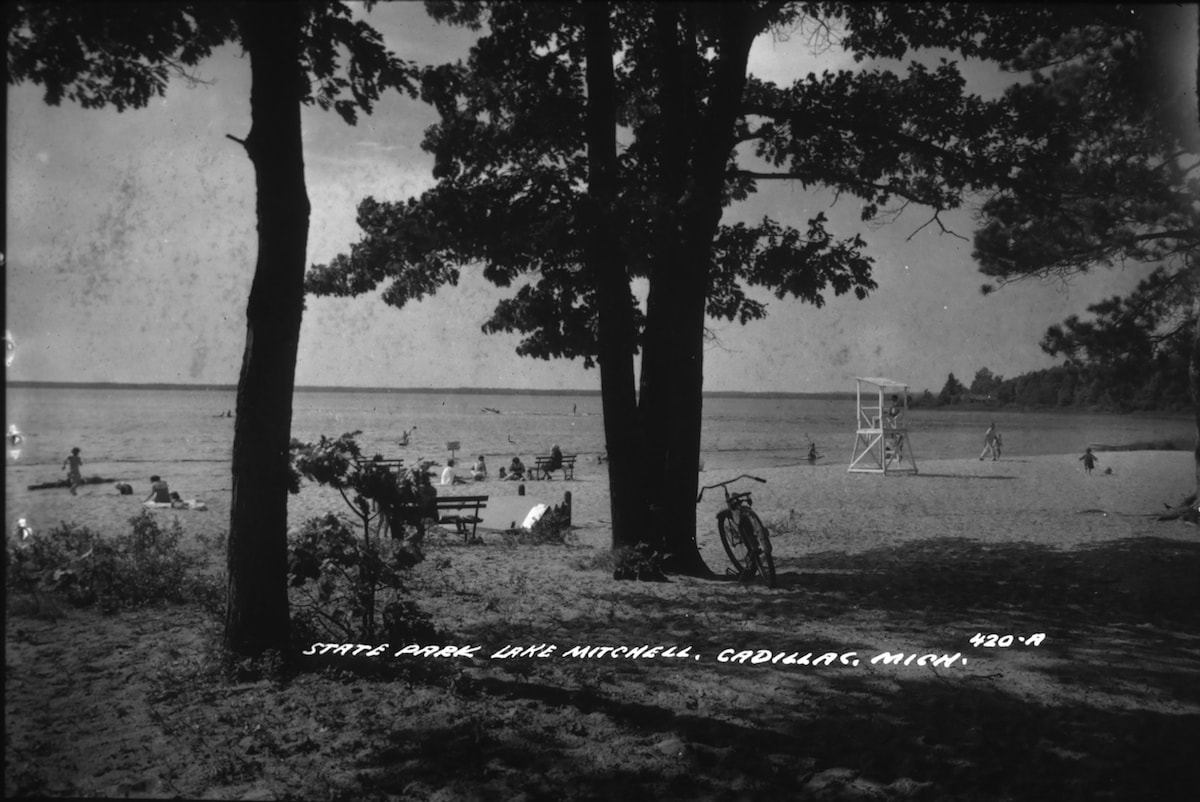 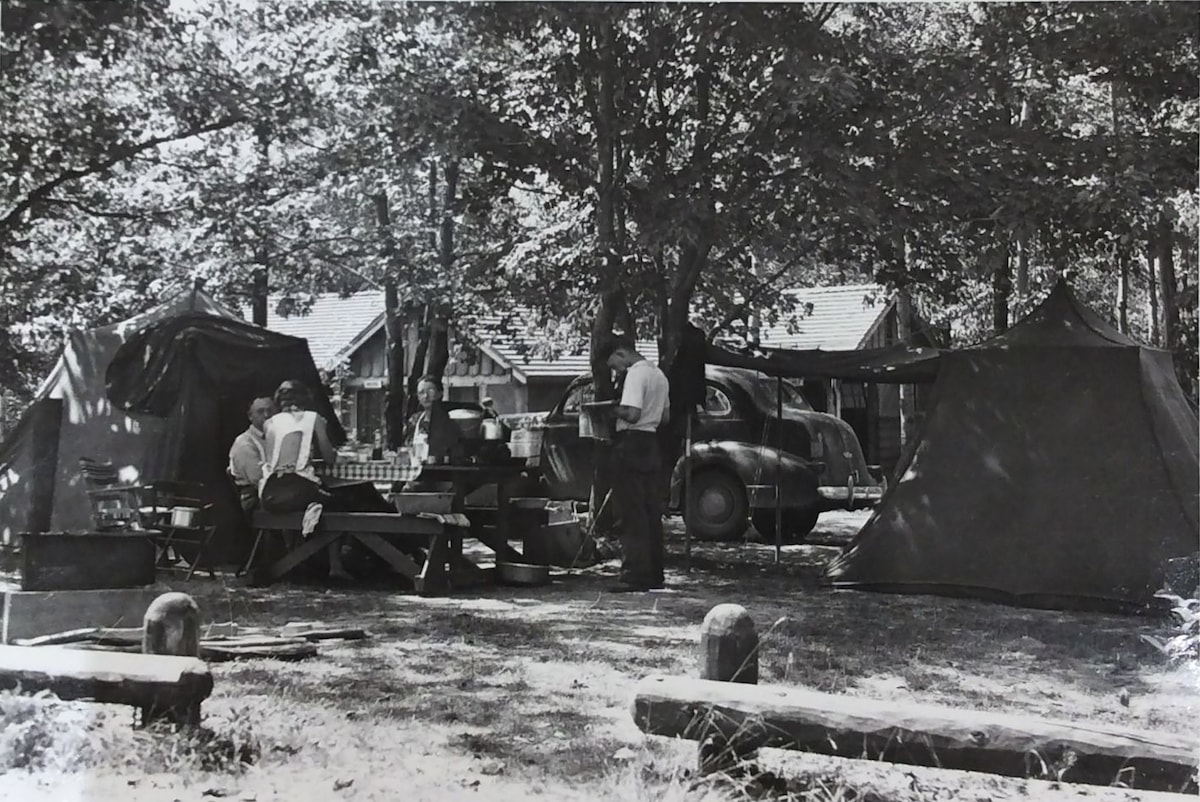 Home to 2,000 feet of sandy shoreline, fishing and boating, this state park is situated south of Indian River, along the southeast corner of 17,120-acre Burt Lake in Cheboygan County. The first portion of land to be set aside for the park was purchased in 1920, with more land acquired through 1939 bringing the total size of the park to 406 acres.

Located along the shores of Lake Michigan in Oceana County, a harbor pier, paved campsites and a fine sand swimming beach greet visitors to this 50-acre state park in Pentwater. Namesake Mears was an early settler of Pentwater who built a sawmill and a boarding house and founded the Middlesex Brick & Title Co. His daughter would later donate land for the park.

Situated between the beauty of Lake Michigan to the west and the Grand River on the north, this 48-acre beach state park in Ottawa County offers scenic views of the lake and the Grand Haven pier and lighthouse. An initial 10 acres from the estate of Stephen Monroe was purchased by the city of Grand Haven and offered to the state for the development of this park. The Battle Creek Enquirer reported the land was officially accepted by the state conservation commission in June 1921.

This 107-acre park in Alcona County is within walking distance of the resort town of Harrisville on the sandy shores of Lake Huron. Near the Sturgeon Point Lighthouse, the park has a day-use and campground area among a stand of cedar and pine trees.

Located 6 miles north of Onaway along M-211, this park in Presque Isle County is known for its rugged and picturesque landscape along the shores of Black Lake. At 158-acres, the park sports sand cobblestone beaches, unique rock outcroppings and virgin white pines. The park, located in an area once frequented by Ojibwa Indians, was acquired from Presque Isle County and private donors.

This 62-acre park, home to sandy beaches with beautiful views, is found south of Gaylord in Otsego County. The park has easy access to Michigan’s signature Iron Belle Trail for biking and hiking, along with opportunities for boating and fishing. Large oak, maple and pine trees offer visitors shade on hot summer days.

Named for lumber baron Paul H. Hoeft, who donated property toward the creation of this Presque Isle County recreation destination, this 304-acre park is heavily wooded and situated along the Lake Huron shoreline. A picnic pavilion was built by the Civilian Conservation Corps during the 1930s. There are several trails here, including beach and hardwood forest trails that stretch for 1.5 miles each, along with the Ocqueoc Falls Bicentennial Pathway.

At 2,936 acres, this is the largest of those early state parks created a century ago. Located along the Lake Michigan shore in Oceana County, Silver Lake State Park is best known for extensive sand dunes that attract off-road vehicle riders to the park’s scramble area. These are the only sand dunes open to off-road vehicle riders east of the Mississippi River. The park also features camping and swimming.

Later renamed Keith J. Charters Traverse City State Park, after the conservationist, hunter and fisherman who served on the Michigan Natural Resources Commission from 1994 to 2010, this park is located on a quarter-mile of beach on Grand Traverse Bay. The 47-acre park in Grand Traverse County was initially established on 16 acres of land, with additional property added in 1921 and 1939.

This southern Michigan park situated on Wamplers Lake, 9 miles west of Clinton, was later renamed for state Sen. Walter J. Hayes after the land was donated to the park honoring him. Today, the 78 acres at W.J. Hayes State Park are found within portions of Lenawee, Jackson and Washtenaw counties, in an area known as the Irish Hills, which is home to 52 lakes and rolling topography. Activities here range from geocaching and metal detecting to boating, fishing and swimming.

Located in Clare County at the north end of Budd Lake, this park offers 36 wooded acres, with fishing, paddling and opportunities for day trips, near Harrison. This location was the original site of the Wilson Brothers Sawmill and Company Store, which thrived in the late 1800s.

Situated between Lake Cadillac and Lake Mitchell, this 334-acre park in Wexford County is popular as a camping, fishing and boating destination. A canal runs through the park and connects the two lakes. The Carl T. Johnson Hunting and Fishing Center and the Mitchell Heritage Nature Trail are located within the park.

This 563-acre park on Lake Charlevoix is home to a popular beach and an interesting blend of gently rolling terrain, cedar swamp and lowlands. The park’s concession stand was built during the 1930s by the Civilian Conservation Corps.

In its Aug. 21, 1920 article, The Times-Herald of Port Huron said it didn’t have the space available “to even outline every important feature in connection with the state park system. That it will be of tremendous benefit goes almost without saying.

“Great growths of virgin pine and other woods will be kept intact, so that in the years to come the children of our children and of their children and those who follow after may enjoy the secluded and inspiring wilderness of their forefathers,” the newspaper said.

“They may take canoe trips through the lakes and rivers, as the Indians did. They may use the same trails, or they may go by automobile or train to escape the driving pace of city life to the tree-covered hills, the brooks, the rocky glens. There will be reforestation, too, in many places so that, a hundred years from now, thousands of acres will have been restored to their natural state.”